Life History of the Grey Pansy 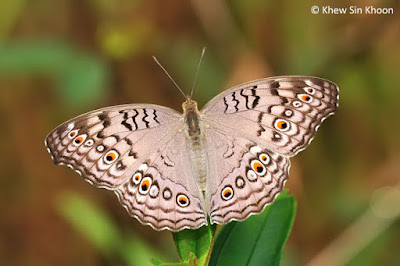 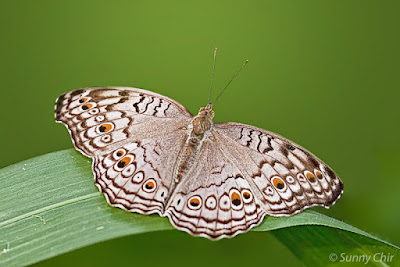 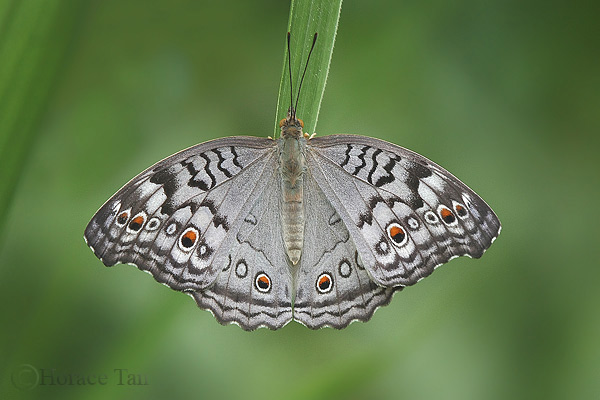 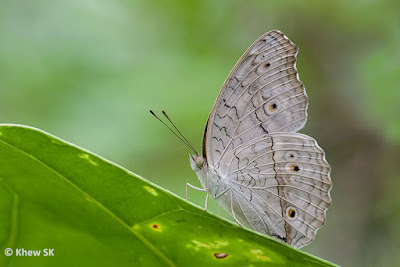 Physical Description of Adult Butterfly:
On the upperside, the wings are pale greyish buff and distinctly marked with dark brown discal and submarginal lines. Post-discal series of eye-spots, some of which are divided into an outer black half and an inner orange half, are found on both forewing and hindwing. On the underside, the wings are marked as per above but all markings are much paler. 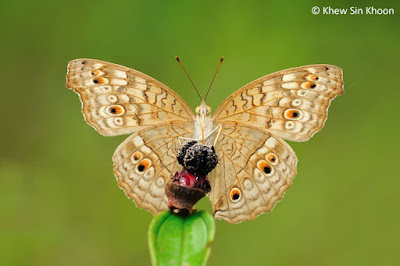 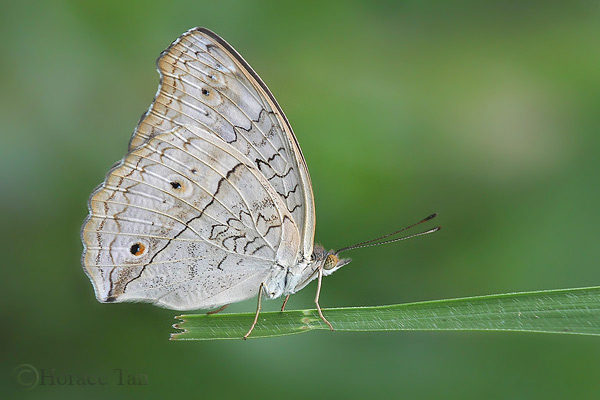 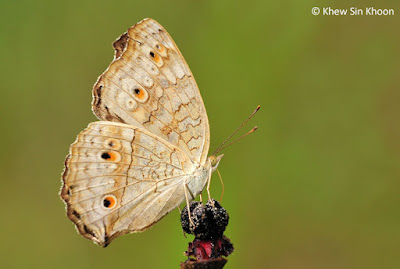 Field Observations of Butterfly Behaviour:
This species is the rarest of the four Pansy species in Singapore. It makes seasonal and localized appearances, and can be found in nature reserves and coastal parks. It flies in the usual gliding manner of the Junonia spp. Under sunny condition, the adults have a habit of opening their wings wide to sunbathe while resting on a perch. 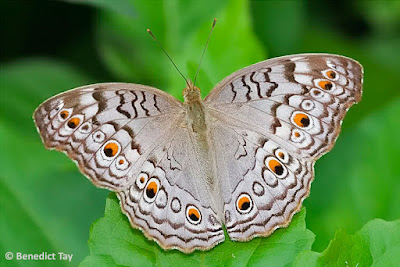 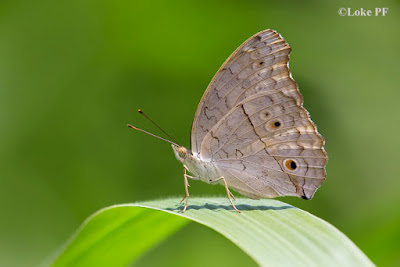 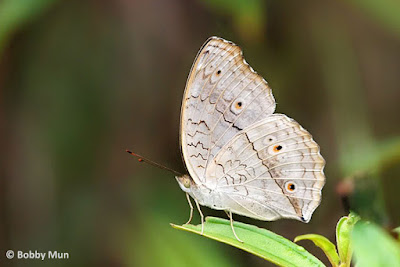 Early Stages:
In Singapore, two host plants have been recorded so far. They are Nelsonia canescens and Limnophila villosa, belonging to the Acanthaceae and Plantaginaceae families respectively. Both occur as herbs, carpeting the ground wherever they inhabit. The caterpillars of the Grey Pansy feed on leaves of the host plants. 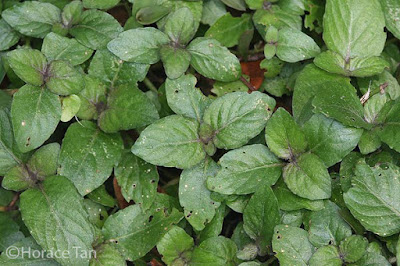 
The eggs of the Grey Pansy are laid singly on the leaves or shoots of the host plants. The greenish egg is somewhat globular in shape but with a flat top. A number of raised ridges run from this top end to the base of the egg. Each egg has a diameter of about 0.6-0.7mm. 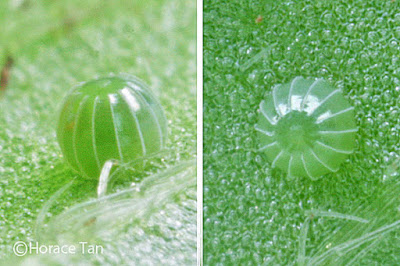 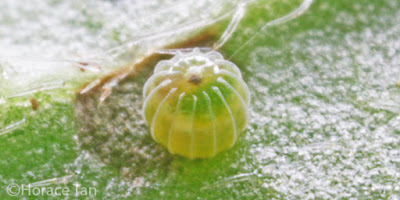 A maturing egg of the Grey Pansy.


The egg takes about 3 days to hatch. The young caterpillar emerges by eating away part of the egg shell, and then proceeds to eat the rest of the egg shell from the outside. The initial length of the newly hatched is about 1.3mm. The cylindrical and yellowish orange body is covered with many small tubercles. Long dark setae emanate from these tubercles. The head capsule is black entirely. Once it starts to devour leaf lamina, the 1st instar caterpillar takes on a yellowis green appearance. After reaching about 3mm in 2-3 days, the caterpillar moults to the 2nd instar. 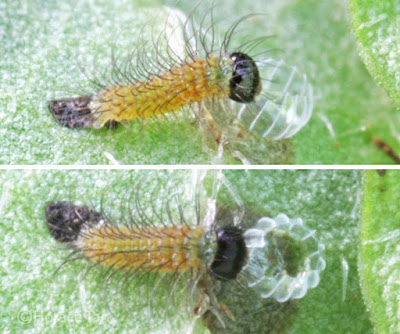 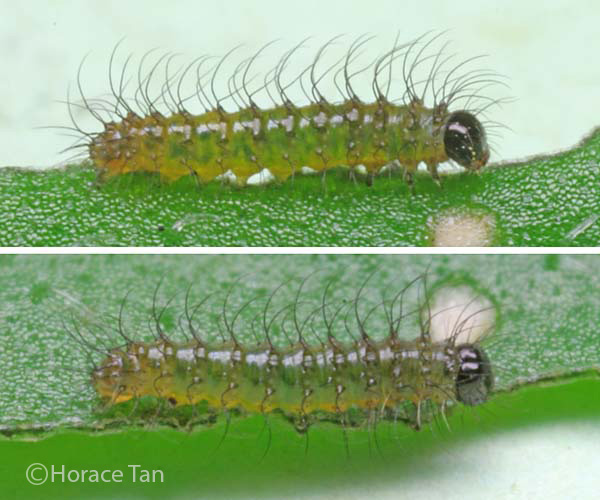 
The body of the 2nd instar caterpillar is pale brown. Moderately long and branched brownish processes run along the length of the body. Fine setae emanate from these processes and from other small tubercles on the body surface. The head capsule is black. This instar lasts about 2-2.5 days with the body length reaching about 5mm. 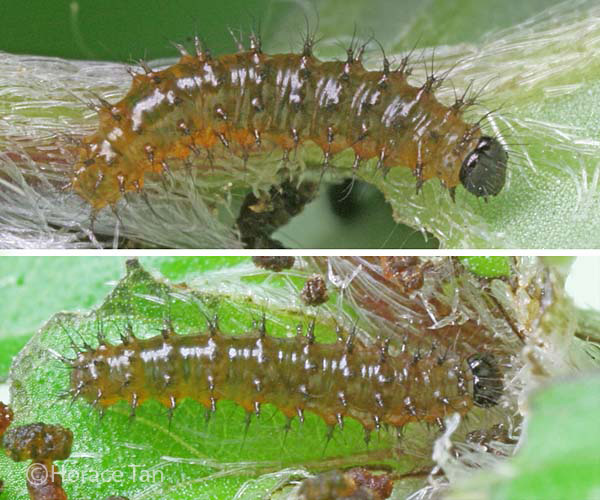 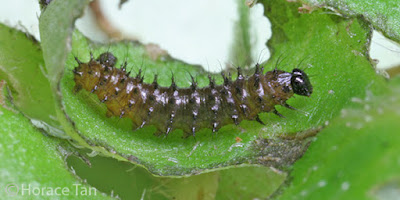 A late 2nd instar caterpillar, dormant prior to its moult, length: 5mm. 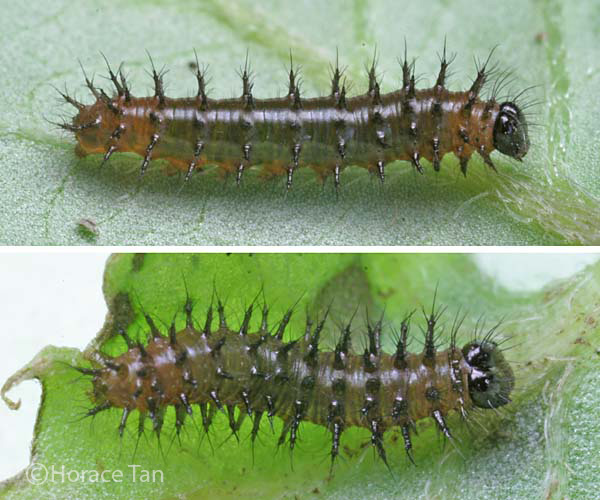 
The 4th instar caterpillar closely resembles the 3rd instar caterpillar, except for the proportionately longer processes and the change of the body colour to a much darker shade of brown. This instar lasts about 3 days with the body length reaching up to about 16mm. 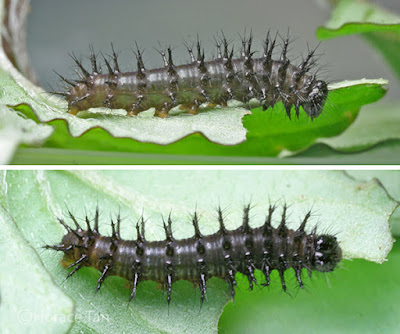 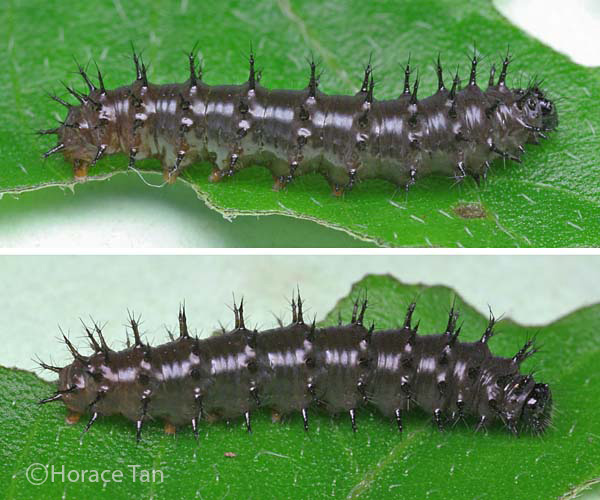 Two views of a 4th instar caterpillar, late in this stage, length: 15.5mm.


The 5th (and penultimate) instar caterpillar is almost black to the naked eyes. One discernible difference is the presence of a dense set of moderately long fine setae covering the entire body surface. The black head capsule also takes on small orange-coloured patches. This instar lasts for about 3 days, and the body length reaches up to 24mm. 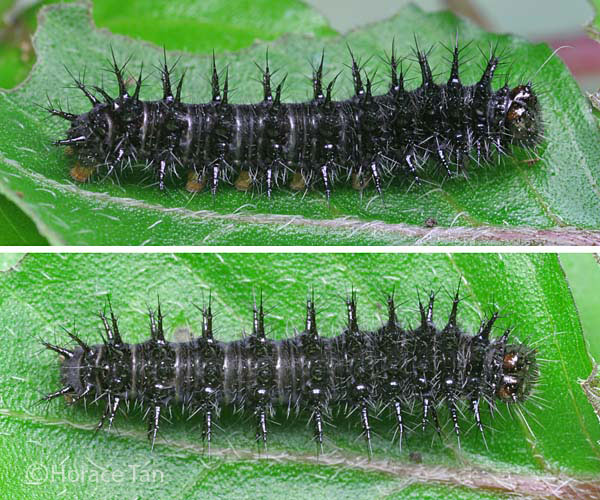 Two views of a 5th instar caterpillar, early in this stage, length: 16mm. 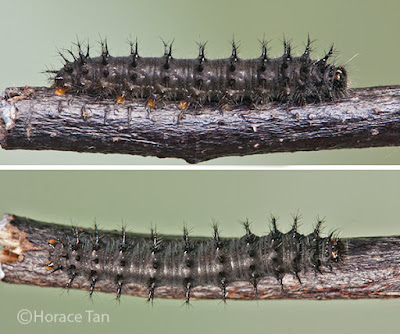 Two views of a 5th instar caterpillar, late in this stage, length: 24mm.


The 6th (and final) instar caterpillar is similar to the 5th instar caterpillar but has an even denser carpet of whitish fine setae on the body surface. A yellowish-orange band is present laterally, running just below the spiracles. The head capsule is black with its upper quarter in orange. 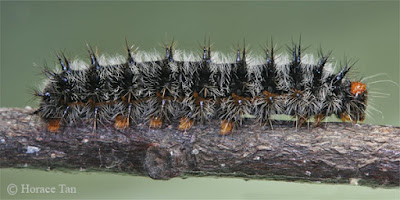 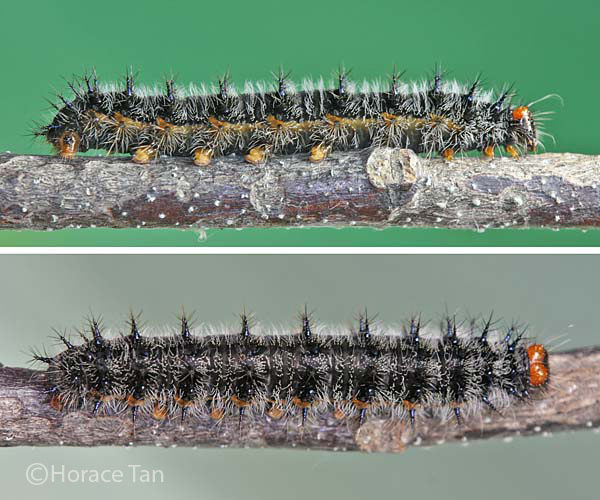 
The 6th instar lasts for 4-5 days, and the body length reaches up to 45mm. At the end of the 6th instar, the caterpillar ceases feeding and wanders around. Eventually it stops at a spot on the underside of a leaf, petiole, young shoot/stem and spins a silk pad from which it hangs vertically to take on the pre-pupatory pose. 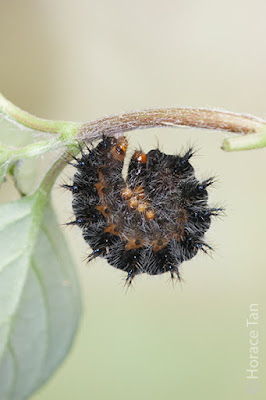 A pre-pupa of the Grey Pansy.

Pupation takes place about 0.5 days later. The pupa suspends itself from the silk pad with no supporting silk girdle. It is entirely greyish brown with a series of dorso-lateral pairs of short and pointed processes, one pair to each segment. The dorsum is sharply raised at the mesothorax. Length of pupae: 17-19mm. 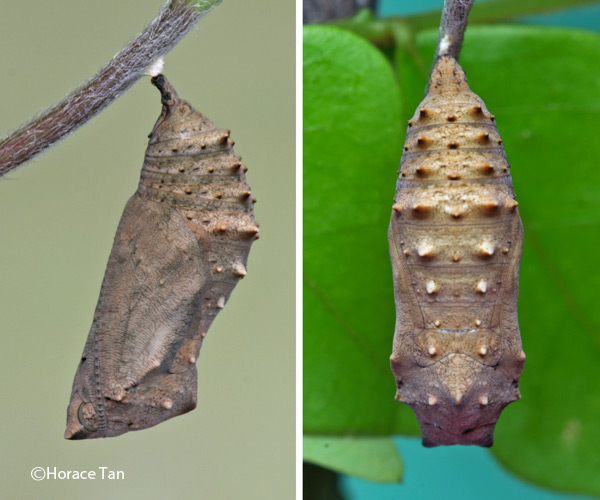 Two views of a pupa of the Grey Pansy. 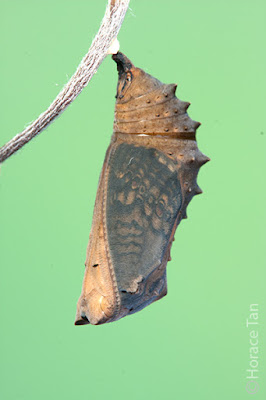 A mature pupa of the Grey Pansy.


After about 6 days of development, the pupal skin of the mature pupa turns translucent and the pupa turns dark brown as a result. Patches of orangy brown can also be noticed in the wing pad. The adult butterfly emerges from the pupa the next day. 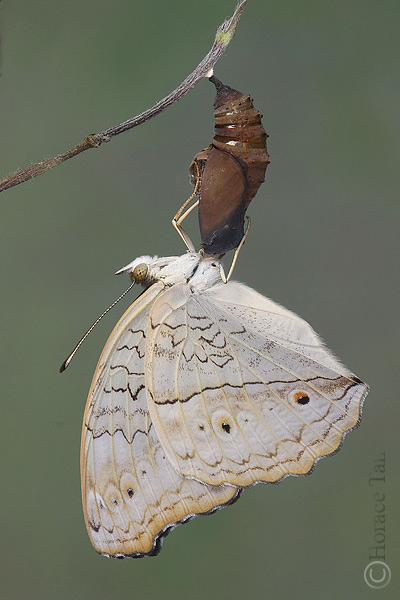 A newly eclosed Grey Pansy resting on its pupal case.