Life History of the Common Caerulean 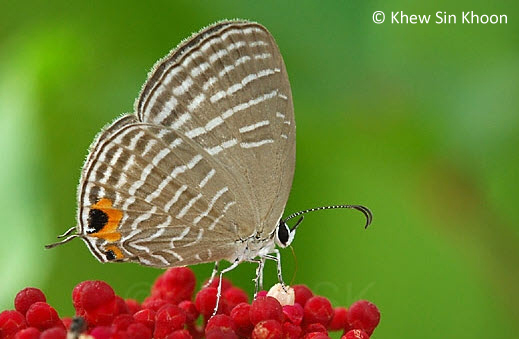 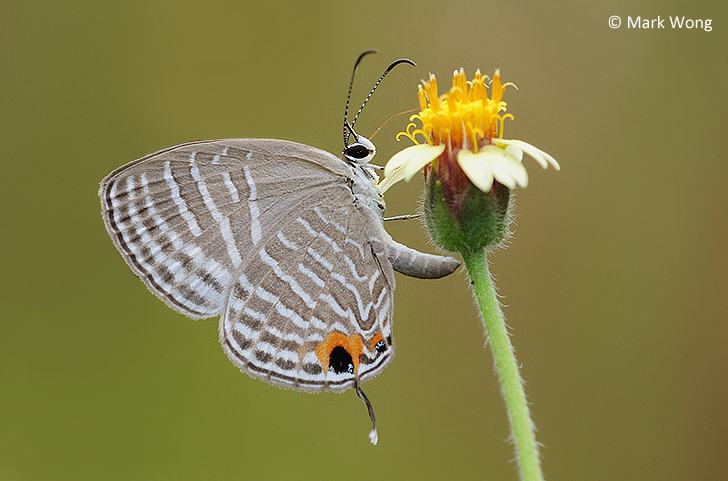 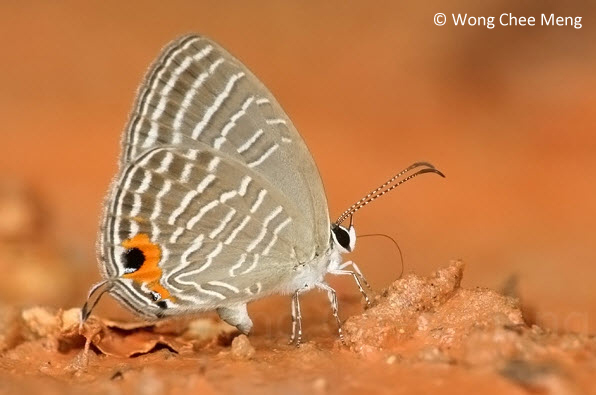 On the upperside, the male is whitish blue on both wings with a dark forewing border up to 1mm wide at the apex, and the female is whiter and with much broader dark borders on both wings. On the underside, the wings are greyish to ochreous brown and marked with whitish striae. The barb-like marking (a characteristic feature of Jamides spp.) in space 1b on the hindwing is rather distinct. As a member of the celeno sub-group, the post-discal band on the forewing is continuous from vein 3 to 7. Each hindwing features a black-centred orange-crowned tornal spot and a white-tipped filamentous tail at the end of vein 2. 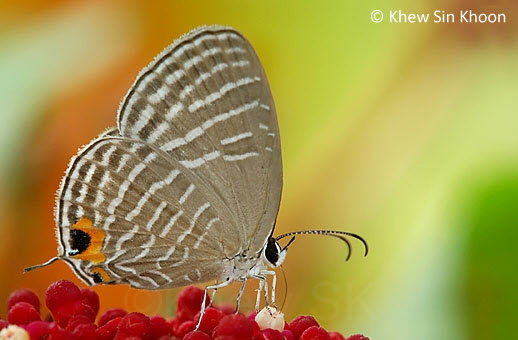 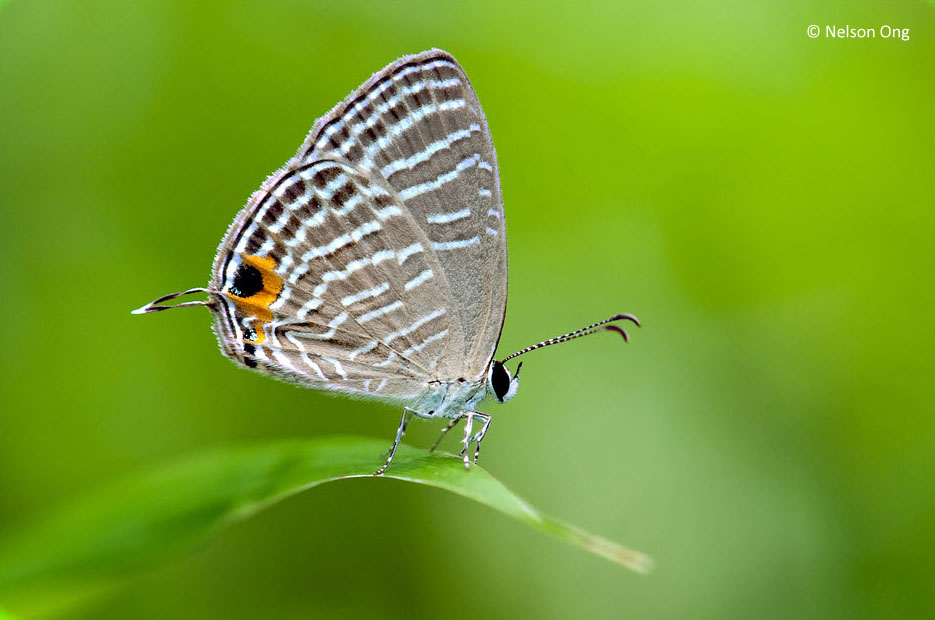 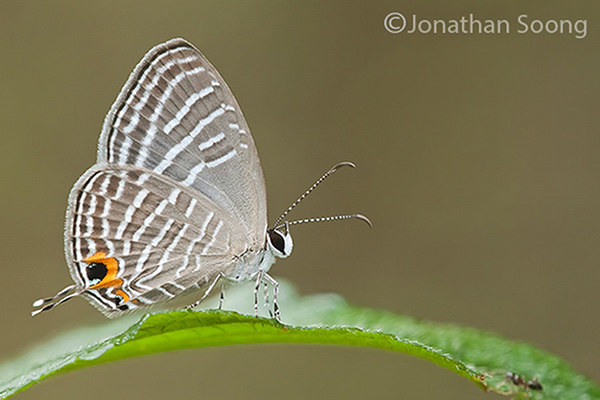 This species is common and widely distributed in Singapore. They are typically found at the edges of the nature reserves, wastelands and in some gardens, often visiting flowers for nectar. Males have been observed to puddle on wet grounds. 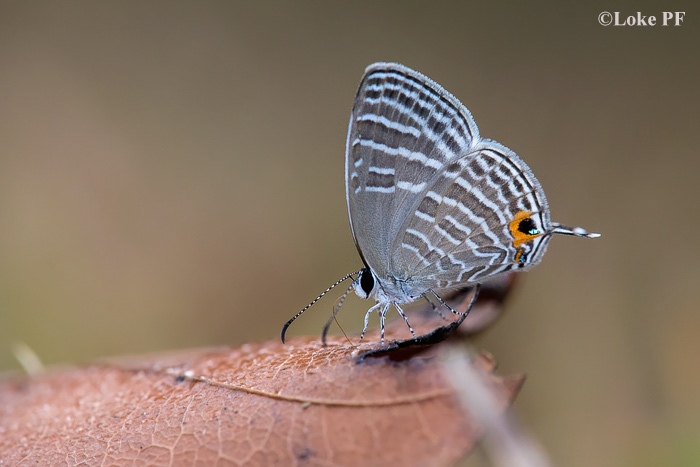 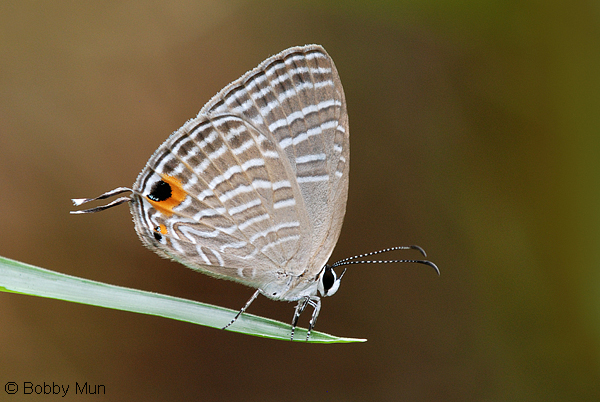 Three local host plants have been recorded so far for the Common Caerulean, and records from across the region show that there should be more host plants being utilized locally. Caterpillars of the Common Caeruelan feed on young leaves and inflorescences of the host plant. They are typically found in the company of attending ants. 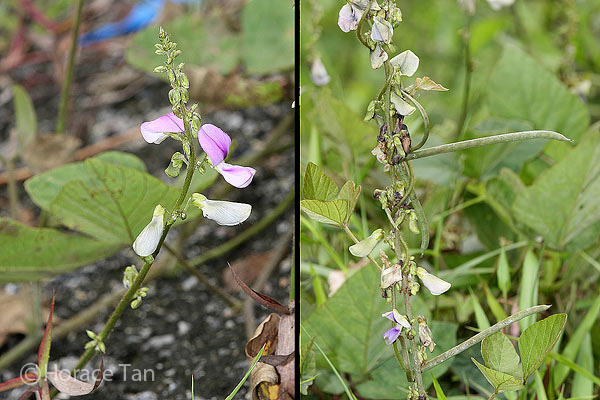 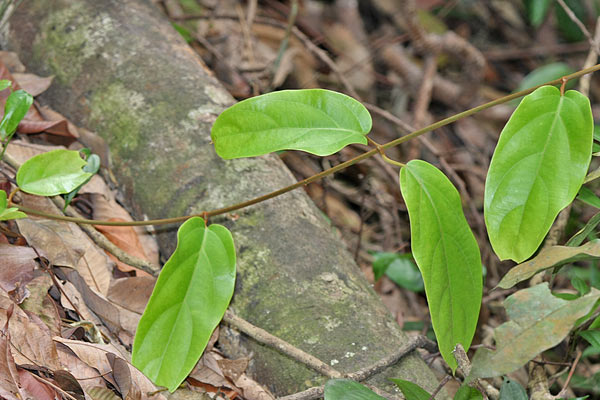 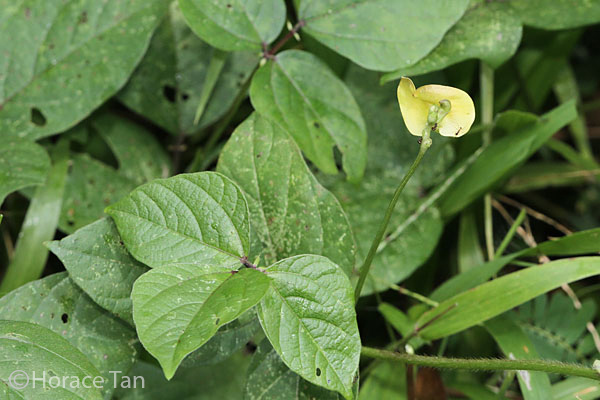 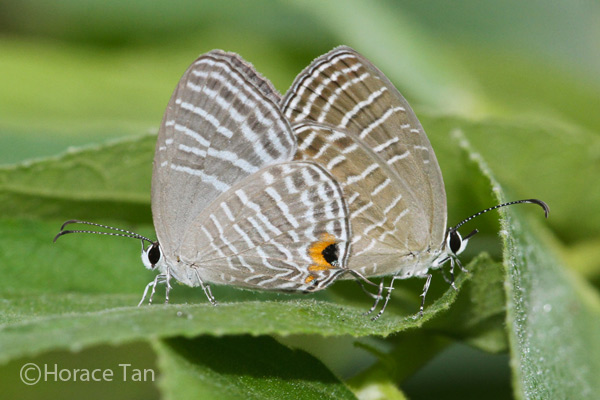 A mating pair of the Common Caerulean.


Eggs of the Common Caerulean are laid singly on a young leaf, a leaf bud or a flower bud of the host plant. The small pale green egg is discoid in shape and about 0.7mm in diameter. The surface is covered with a reticulated pattern of intersecting ridges with those on the lateral surface broader and prominent. A female Common Caerulean attempting to lay an egg on Pueraria phaseoloides . 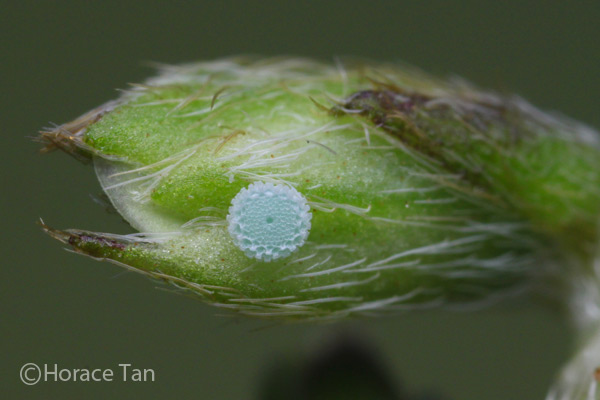 An egg of the Common Caerulean laid on a flower bud of Pueraria phaseoloides. 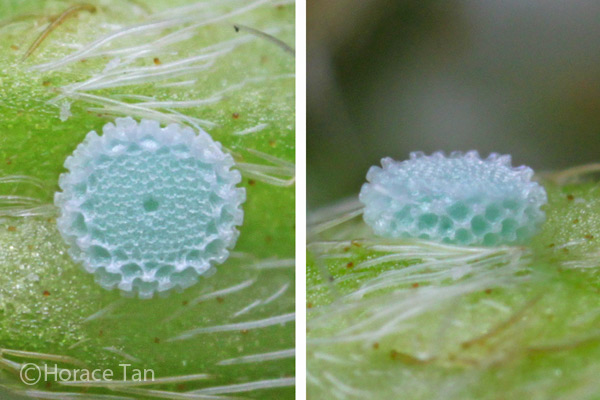 Two views of an egg of the Common Caerulean. 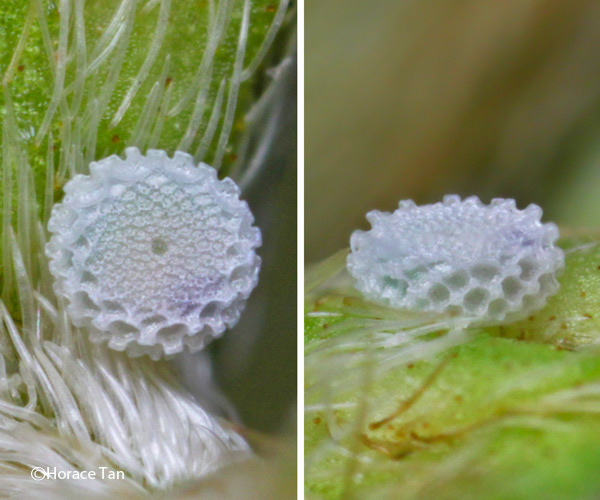 Two views of a mature egg of the Common Caerulean.


The egg takes 2-2.5 days to hatch. The young caterpillar emerges after nibbling away sufficiently large portion of the egg shell and eating its way out of the dried gelatinous substance. Measured at a length of about 1mm, its pale yellowish body is cylindrical in shape, sporting long fine setae (hairs) dorso-laterally and laterally. It has a black head capsule. 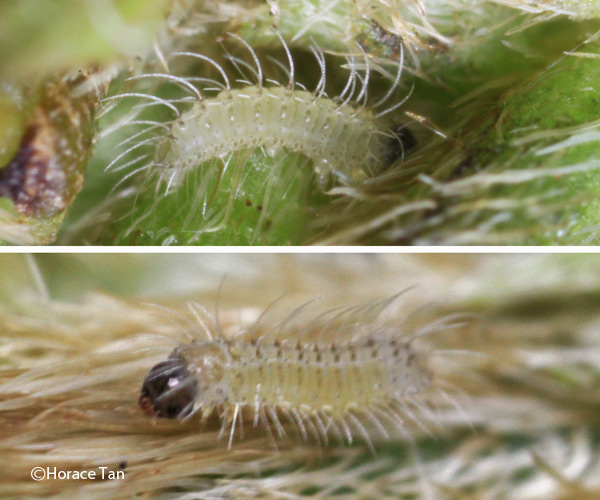 
The newly hatched feeds on the lamina of a young leaf or a flower bud. As its grows in size, lateral pale brownish bands appears on its body. After about 2-2.5 days of growth and reaching a length of about 2.2mm, the caterpillar moults to the next instar. 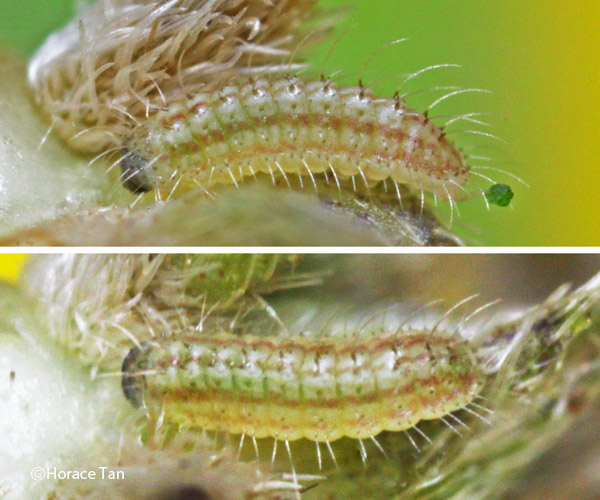 A 1st instar caterpillar, later in this stage, length: 1.6mm.


The 2nd instar caterpillar has numerous short setae, each with a dark-colored base. The body ground color is pale yellowish brown, and pale to dark reddish brown bands and markings adorn the body surface. The prothoracic shield has the same coloration as the body base colour and thus indistinct. Meanwhile, the head capsule has changed its colour to yellowish brown. This instar lasts about 2 days with the body length reaches up to 4.5mm. 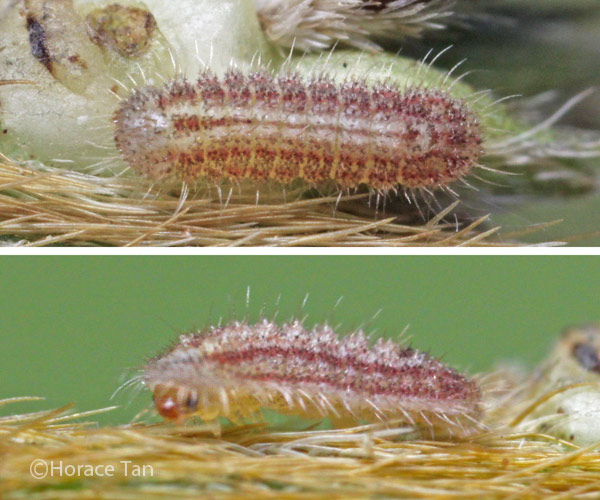 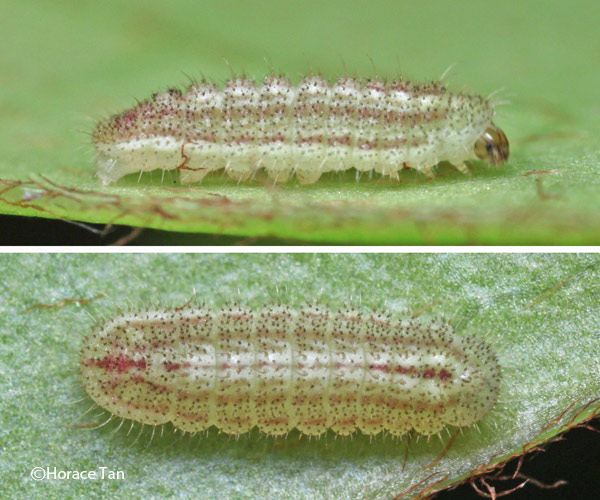 
The 3rd instar caterpillar resembles the 2nd instar caterpillar closely in having numerous short and fine setae all over the body, and similar lateral bands/markings. The markings on the dorsum are distinctively whitish at this stage. In some specimens, the lateral bands/markings lose the reddish brown coloration and give the caterpillar a greenish appearance. Both the dorsal nectary organ (on the 7th abdominal segment) and tentacular organs (on the 8th abdominal segment) are now easily observed. The 3rd instar takes 3-3.5 days to complete with the body length reaching about 7.5mm. 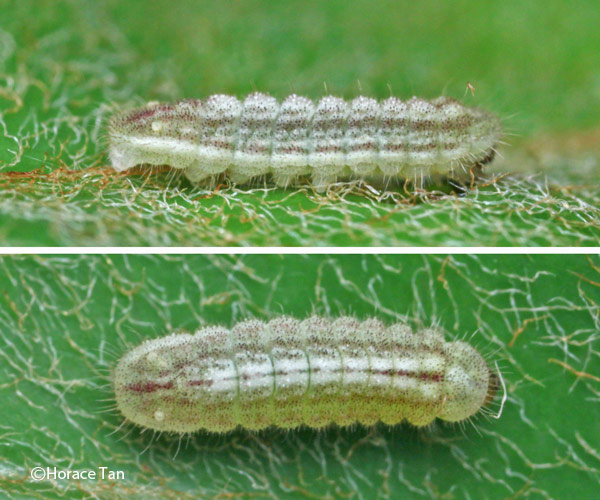 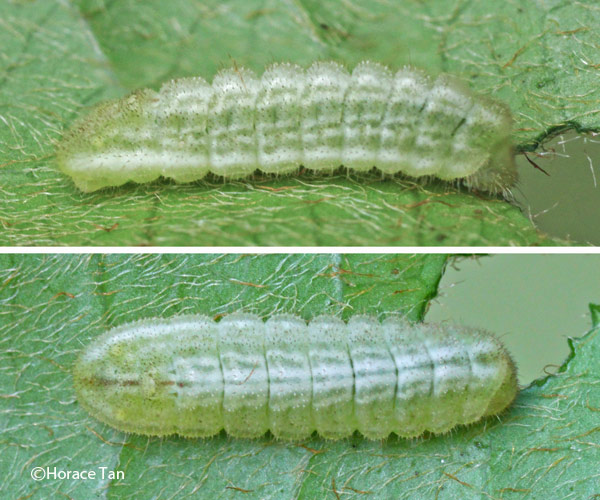 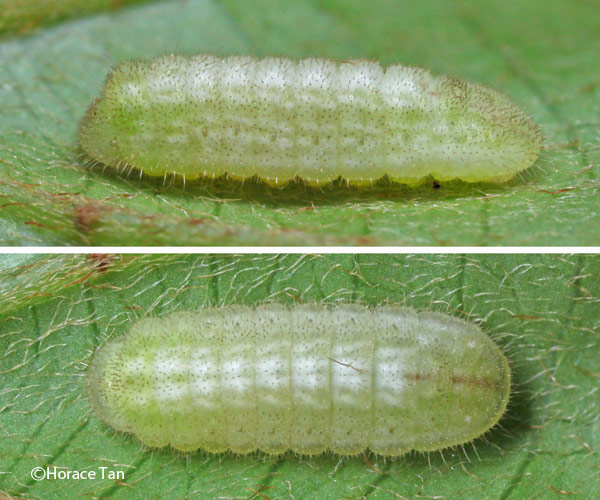 Two views of a 3rd instar caterpillar, later in this stage, length: 6mm.


The 4th (and final) instar caterpillar bears strong resemblance to its former self in the 3rd instar. Again the caterpillar could come in a mostly pale green form or a darker green form with reddish brown markigns. The dorsal nectary organ is now easily observed as a paler elliptical patch on the 7th abdominal segment. The yellowish tentacular organs are short but everted rather frequently. 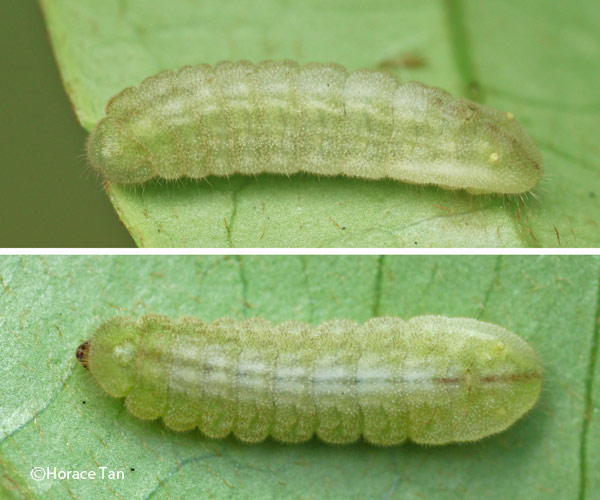 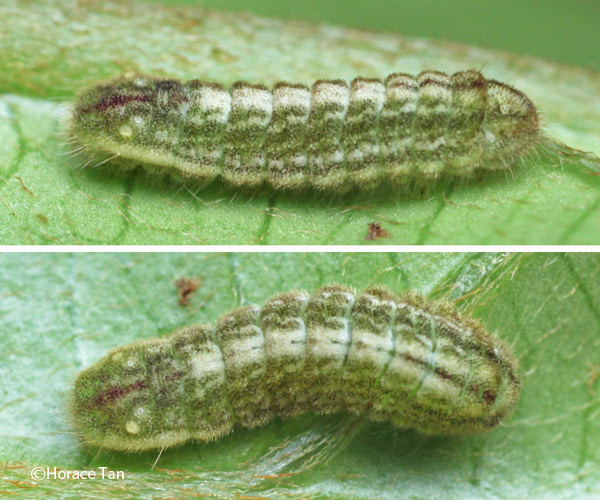 
After about 6-7 days of growth and reaching a maximum length of around 14mm in the final instar, the body of the caterpillar gradually shrinks and decolorises. The caterpillar typically chooses to enter their pre-pupatory phase in tight pockets of space within leaf litter. At the chosen site, the caterpillar readies itself for pupation by spinning a silk girdle and a silk pad. The caterpillar secures itself to the silk pad via claspers at its posterior end. 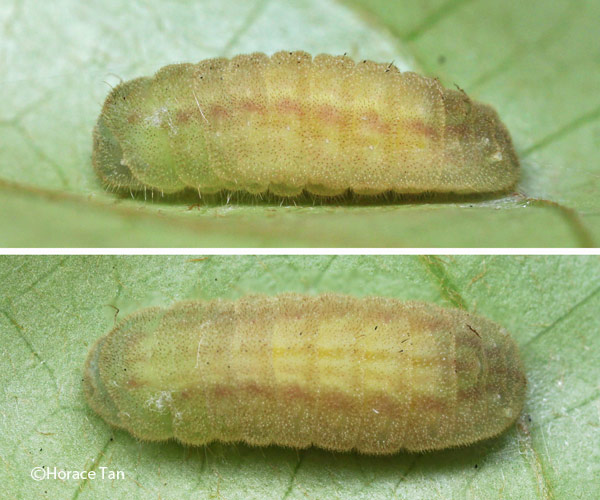 Two views of a pre-pupa of the Common Caerulean.


Pupation takes place after one day of the pre-pupal stage. The pupa has the typical lycaenid shape. It is pale yellowish brown in base color with a fair number of brown and black specks of various sizes. The pupa has a length of about 9-10mm. 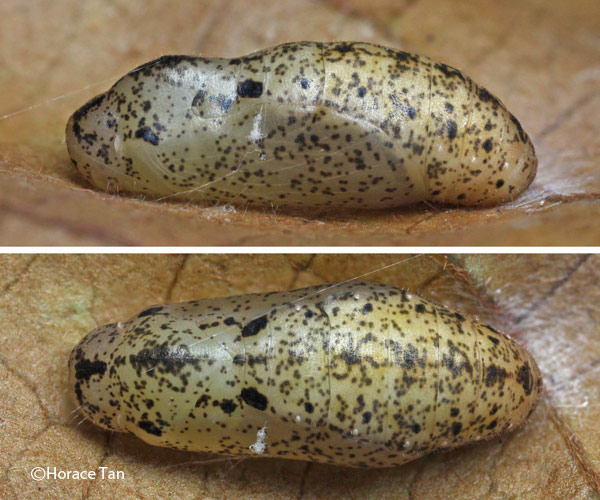 Two views of a pupa of the Common Caerulean, length: 9mm.

Eclosion takes place after 6 days in the pupal stage. The mature pupa gradually darkens in colour the day before. Bluish patches on forewing upperside become clearly visible in the wing pads of the mature pupa. 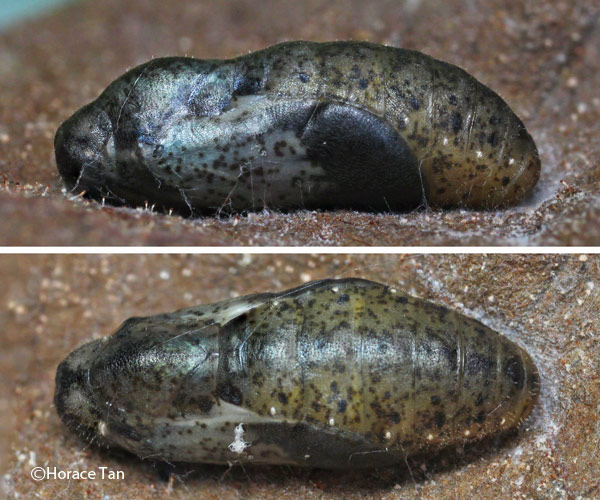 Two views of a mature pupa of a Common Caerulean. 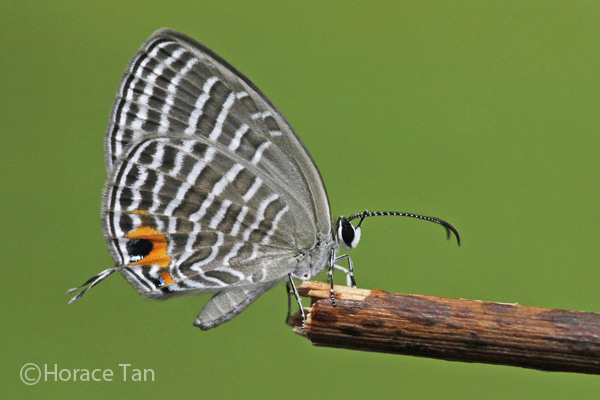 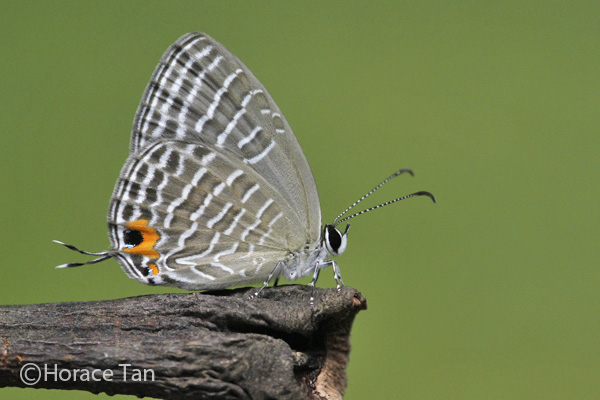