Life History of the Grand Imperial 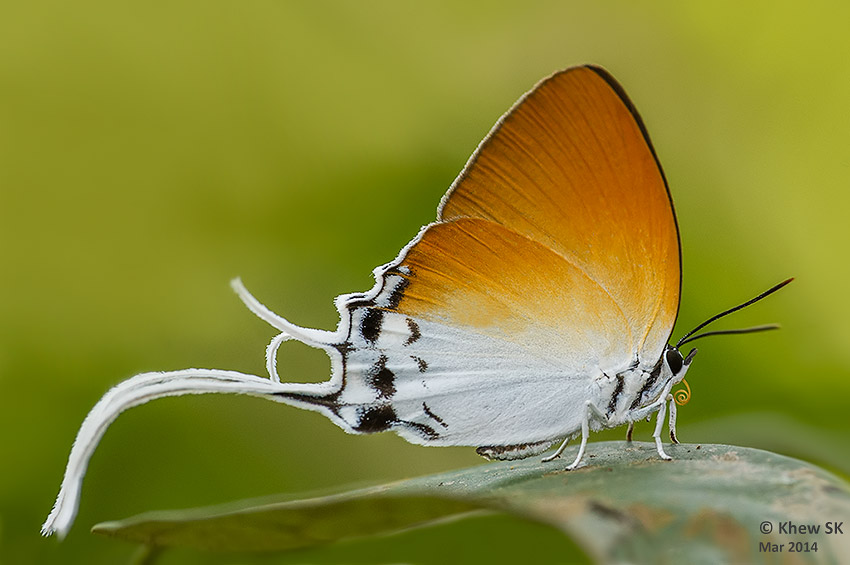 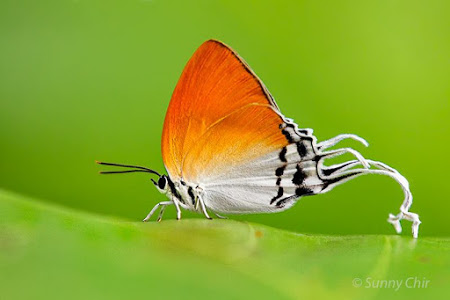 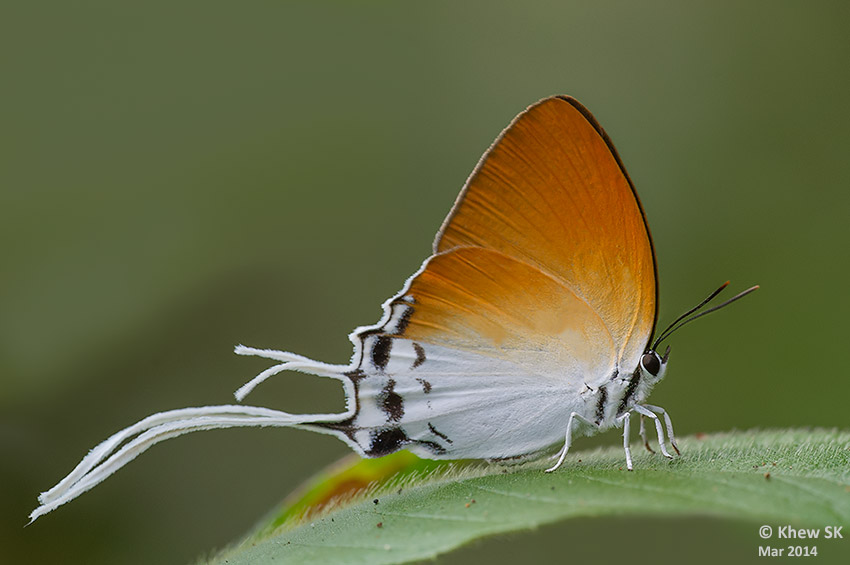 Physical Description of Adult Butterfly:
On the upperside, the male is dark brown with inner and basal halves of both wings in shining blue. The female is almost entirely brown. Both sexes have whitened tornal areas in the hindwing bearing large black quadrate marginal and submarginal spots. On the underside, both sexes are mainly yellowish orange but white in the lower half of the hindwing. Black post-discal striae are present in the tornal half of the hindwing. In the forewing, the basal part of vein 12 is not black (this is a key characteristic for distinguishing the Grand Imperial from the Great Imperial). In the hindwing, there are whitish tails at the end of veins 1b and 2 with the one at vein 1b much longer (about 2.5x as long as the one at vein 2) and fluffy in appearance. 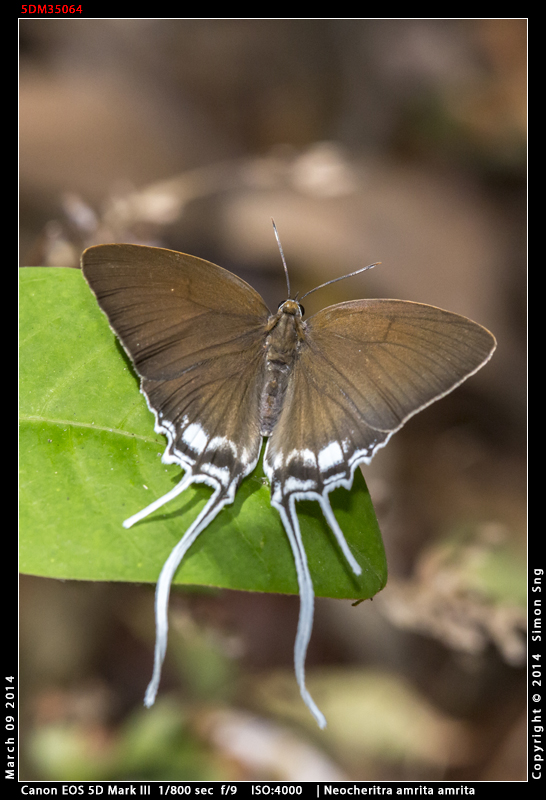 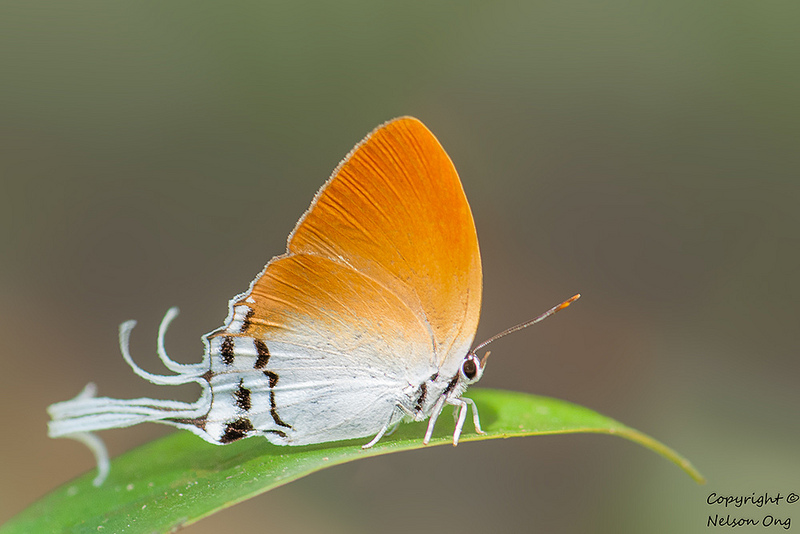 Field Observations of Butterfly Behaviour:
This species is rare in Singapore. The handful of sightings took place mainly in the catchment reserves, as well as the offshore island, Pulau Tekong. The adults have a graceful flight and typically perch with its wings closed upright between flights. In sunny weather, however, they have been observed to sun-bathe with wings fully open. They are sometimes sighted while hanging around a flowering plant for their nectar intake. 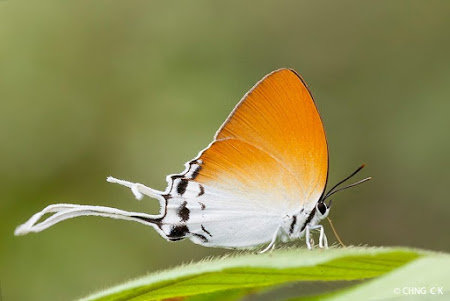 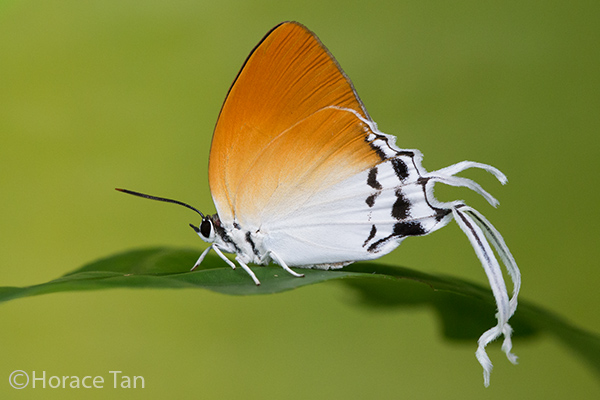 Early Stages:
Only one plant so far has been recorded as the local larval host for the Grand Imperial. This plant is not common in the catchment reserve and only occurs in small numbers. Its species ID is not fully established due to differing views offered by experts. Hopefullly, further discoveries of more mature specimens would allow this problem to be resolved. The caterpillar feeds on the young to mature leaves of the host plant, with the early instars mainly skimming the leaf surface while those in the later instars devouring the leaf lamina whole from the edge. 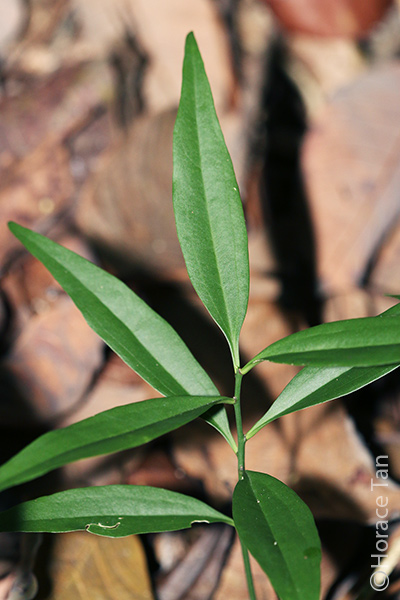 The host plant of the Grand Imperial found in the catchment reserve. 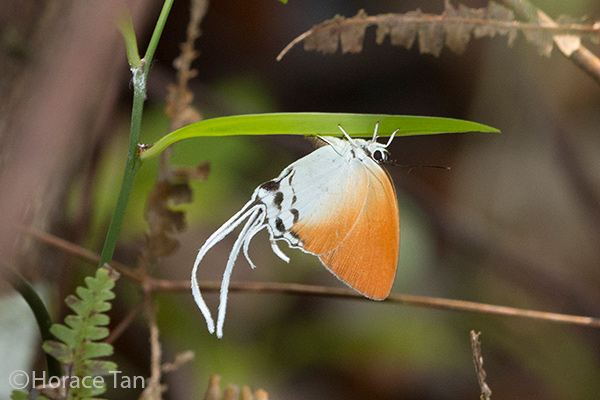 A female Grand Imperial ovipositing on the underside of a leaf of the host plant.


The eggs are laid singly on the underside of a leaf of the host plant. Each egg is about 1-1.1mm in diameter, whitish with a subtle yellowish undertone when freshly laid. The surface is covered with numerous moderately large depressions. The tiny and depressed micropylar sits at the pole. 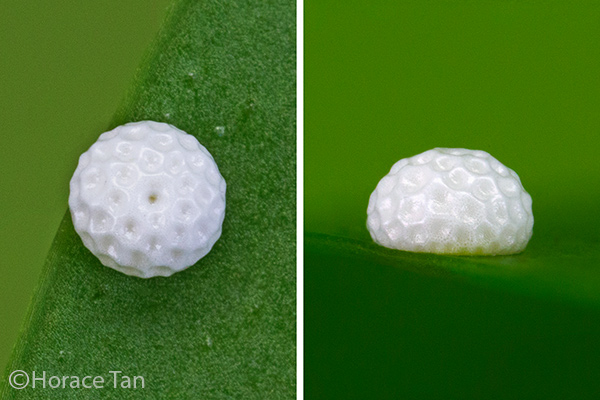 Two views of an egg of the Grand Imperial.


It takes about 4 days for the egg to hatch, with the young caterpillar nibbling away the upper portion of the egg shell to emerge. The newly hatched has a length of about 1.5mm. Its body has a pale yellowish brown ground colour. The pro-thoracic shield and anal plate are pale brown in colour. Each of the segments from the 3rd thoracic segment to the 7th abdominal segment has a dorsal conical protrusion. Whitish setae emanate from these protrusions. The body also features rather long whitish setae along the body rim and a quadrate posterior segment. After hatching, the infant caterpillar proceeds to devour the remnant of the egg shell. 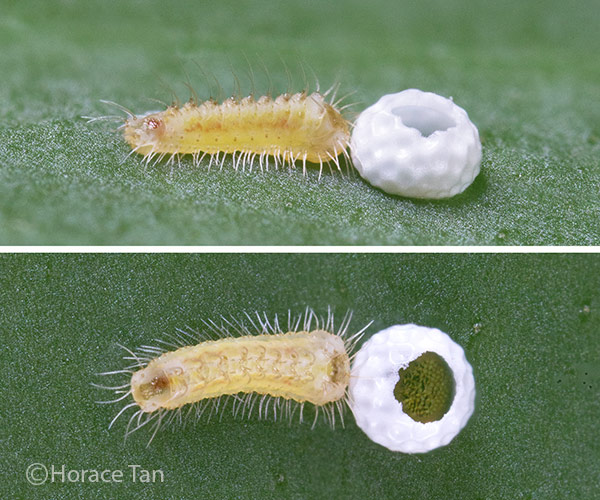 Two views of a newly hatched caterpillar devouring the remnant of its egg shell.


As the caterpillar grows its body turns yellowish with a strong greenish undertone. After about 3 days of growth in the first instar, and reaching a length of about 3.4mm, the caterpillar moults to the next instar. During the dormant stage prior to its moult, the body is whitish with yellowish markings. 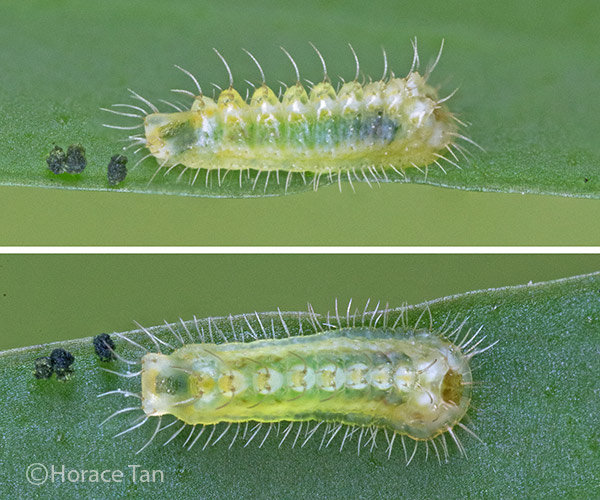 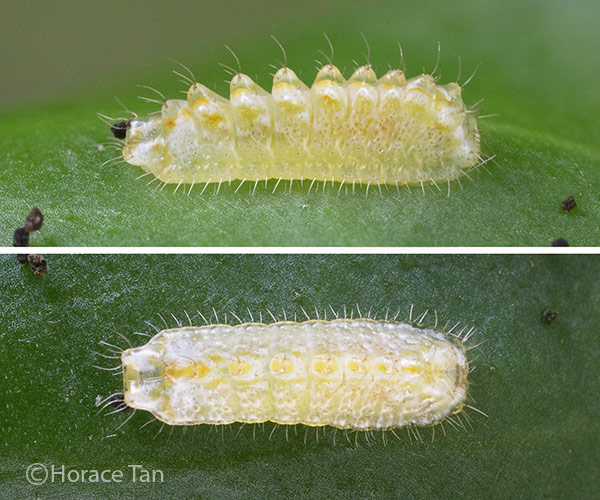 Two views of a 1st instar caterpillar, dormant before its moult.


The 2nd instar caterpillar has proportionately shorter dorsal and lateral setae while the dorsal protrusions are longer and more prominent, especially those in the posterior segments. Its prothoracic shield is dark brown to black in colour. The quadrate posterior segment now has two small conical protrusions. The dorsal nectary organ on the 7th abdominal segment is now discernible. The 2nd instar caterpillar grows steadily and reaches a length of about 5.5mm. After about 2.5 to 3 days in this instar, it moults again. The caterpillar is whitish with a pink undertone when lying dormant prior to the moult. 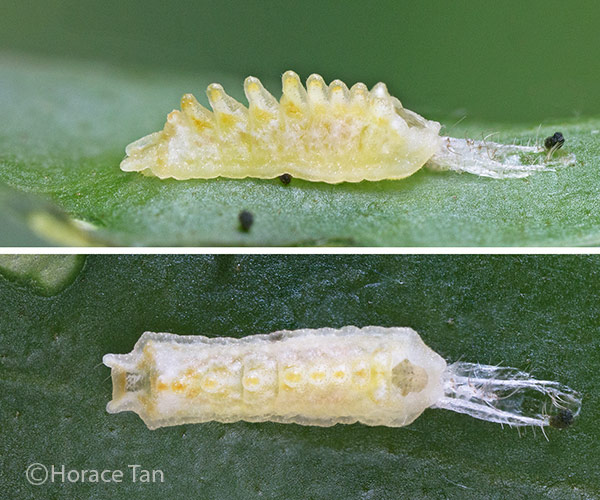 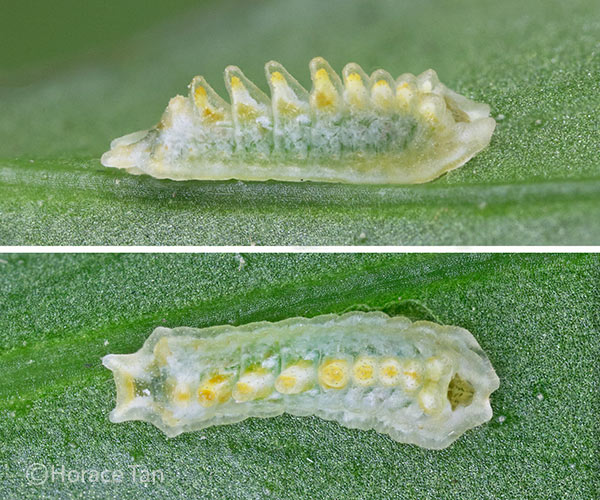 Two views of a 2nd instar caterpillar, later in this stage, length: 4.1mm.. 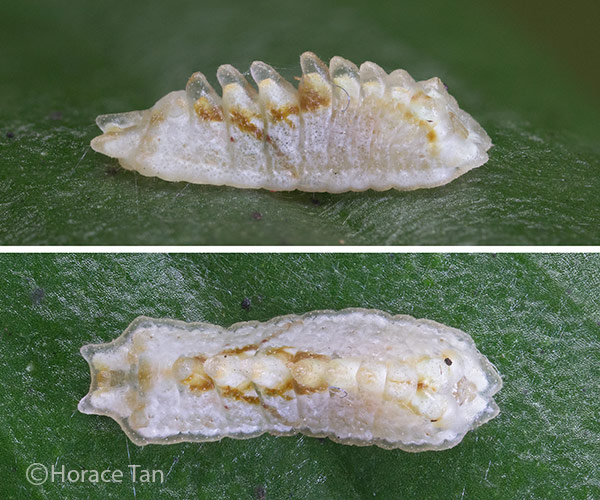 Two views of a 2nd instar caterpillar, late in this stage, dormant prior to its moult, length: 5.5mm.


The 3rd instar caterpillar resembles the 2nd instar caterpillar, but with various features (such as dorsal and posterior conical protrusions, body outline) becoming more pointed or angular. At the anterior segment, two pointed protrusions are now prominently featured. Its body colour is mainly whitish with a pink undertone for the entire instar. Brown stripes can be seen encircling the base of the last 4 conical protrusions. The dorsal nectary organ is also rather large and more prominently featured than in the 2nd instar. The pair of tentacular organs found on the 8th abdominal segment is now easily observed as well. The 3rd instar takes about 2.5-3 days to complete with the body length reaching about 10mmm. 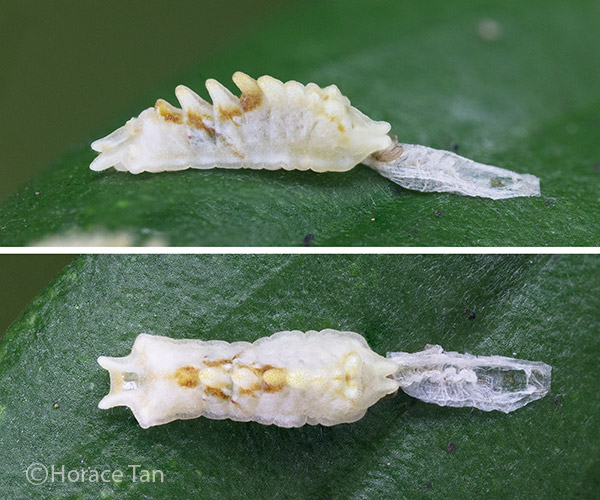 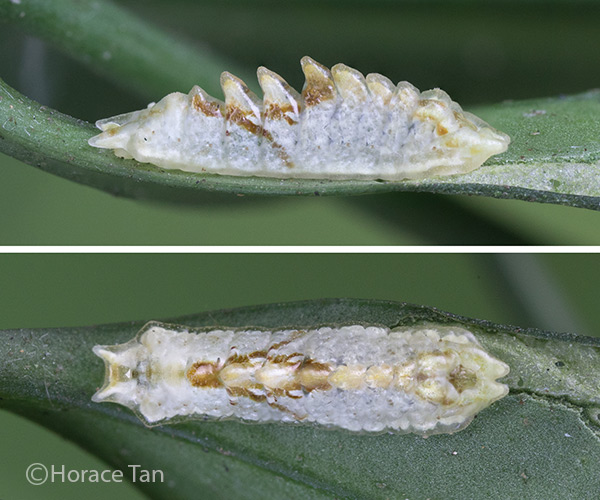 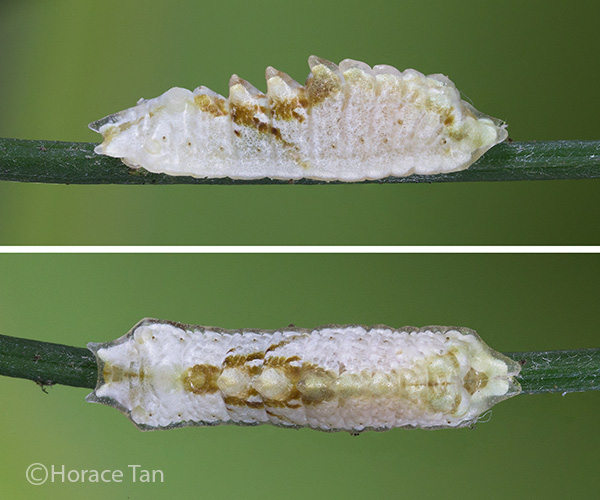 Two views of a late 3rd instar caterpillar, dormant prior to its moult, length: 9.8mm. 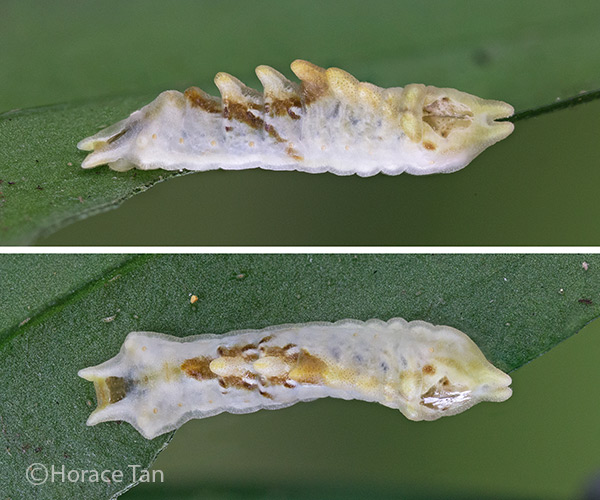 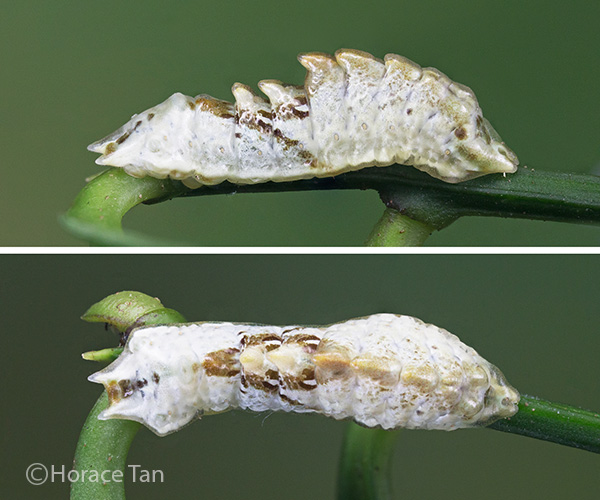 Two views of a 4th instar caterpillar, later in this stage, length: 16mm. 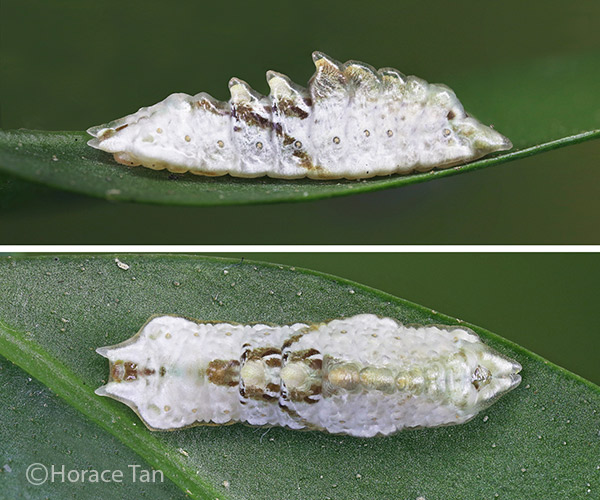 Two views of a late 4th instar caterpillar, dormant prior to its moult, length: 16.2mm.


The 5th instar caterpillar is initially whitish in body colour, but becoming pinky brown to beige brown as growth progresses. By day 3 of this instar, the body base colour is mostly pale to dark brown with whitish coloration restricted to the last 3 to 4 segments. The two anterior protrusions appear to be longer and fused, resembling a snout. 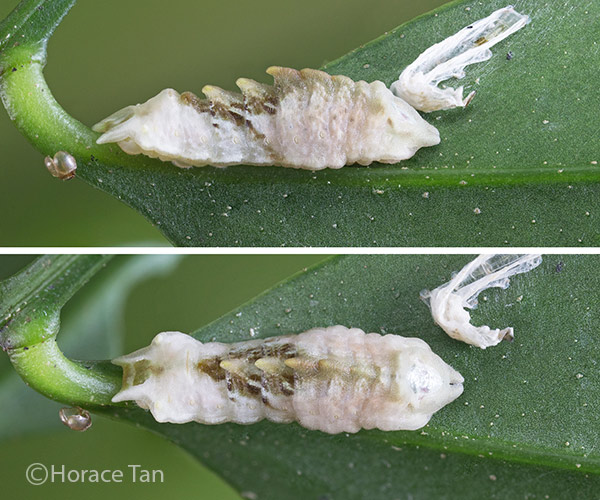 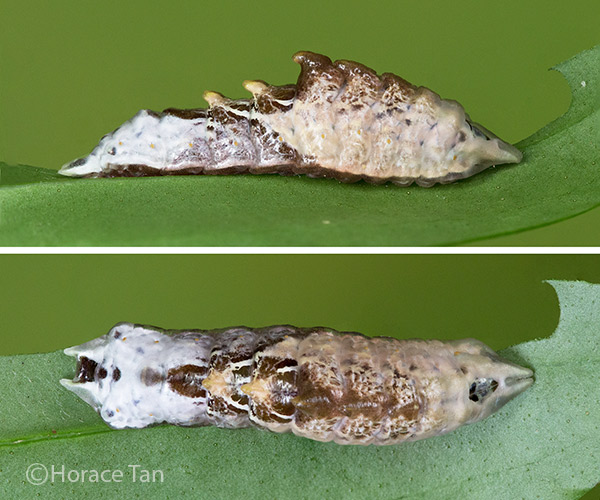 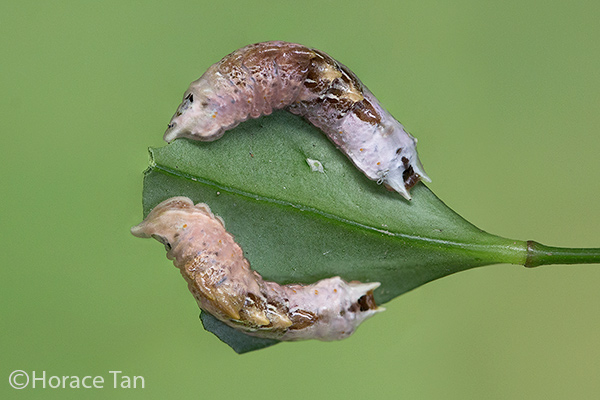 
After about 4 days of feeding and reaching a length of about 28mm, the caterpillar stops food intake, and its body gradually shortened and body base colour decolorised to a patchwork of brown and white. The caterpillar would wander around in seek of a pupation site which is typically a spot on a stem or branch bearing whitish patches. At this site, the pre-pupatory caterpillar prepares for pupation by spinning a silk pad to which it attaches itself via its anal claspers. After 1.5-2 days as a pre-pupa, pupation takes place. The pupa has one prominent dorsal protuberance and two shorter ones next to it. The pupa is predominantly pale to dark greyish brown with powdery green patches decorating its surface. There are also cryptic markings in pale/dark brown, white and green to add to the concealment effect. Pupal length: 15-16mm. 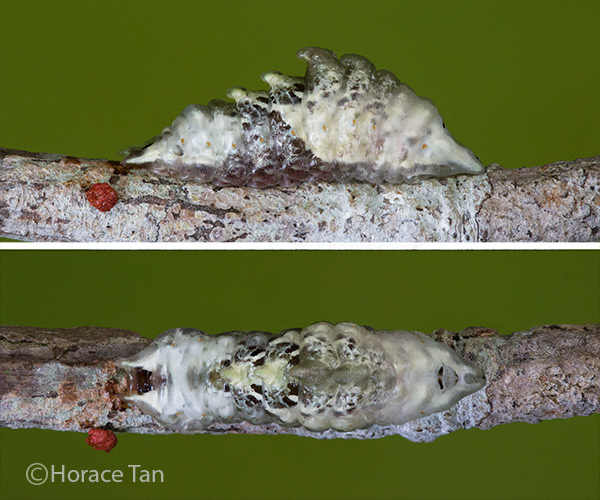 Two views of an immobile pre-pupa of the Grand Imperial. 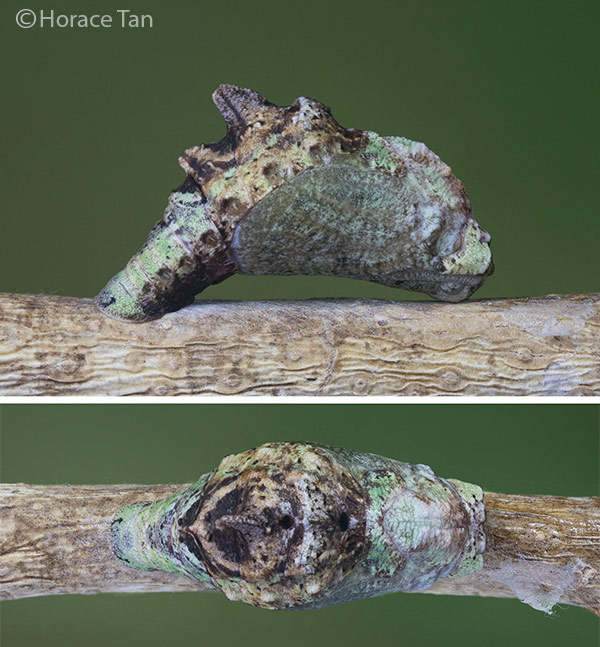 Two views of a pupa of the Grand Imperial.


9 days later, the pupa turns rather dark, first in the wing pad and thorax, then progressively in the abdomen. The next day, the pupal stage comes to an end with the emergence of the adult butterfly. 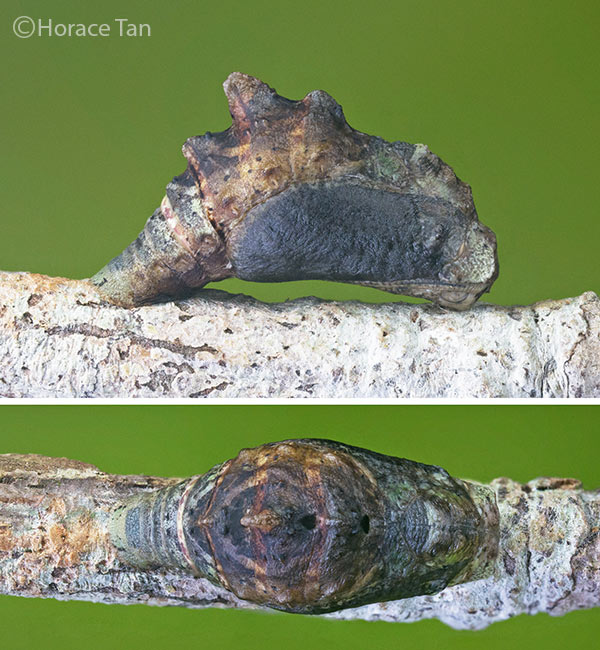 Two views of a mature pupa of a female Grand Imperial. 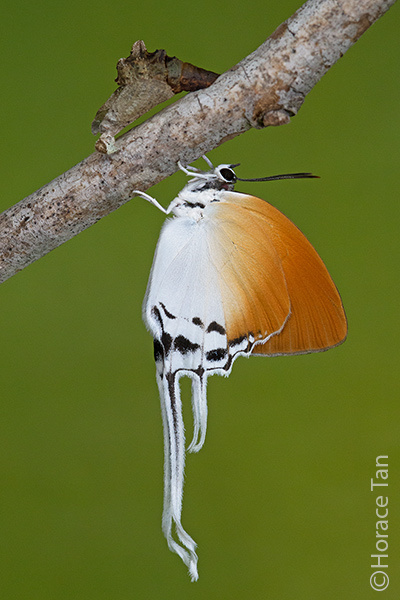 A newly eclosed female  Grand Imperial waiting for its wings to expand fully near its pupal case.

A quite wonderful series of images.
Thank you very much for making them available.

Thanks for the kind words, Tony. :)
It is great to know that our effort is appreciated.

Beautiful photos! Has the host plant been identified yet?