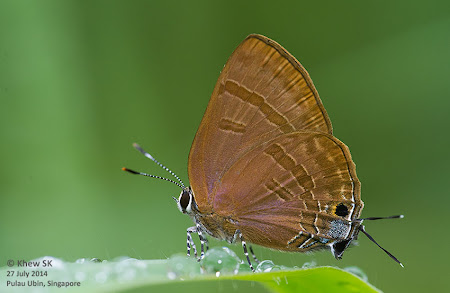 The Indigo Flash is a moderately rare species that has a rather wide distribution, turning up in forested areas as well as urban parks and gardens in Singapore. Both sexes of this species feature deep blue or bluish-green uppersides. It is a fast flyer and sometimes flies and hides on the underside of a leaf when disturbed. On hot sunny days, or in the early morning hours, it can be seen sunbathing with its wings opened flat on the top surfaces of foliage.
The male is indigo blue above and unmarked, whilst the female is a steely-blue and similarly unmarked. The underside is dark brown with broad post-discal bands. There is a strong purple wash on the underside of both wings - more prominently in the male than in the female. This female, shot last weekend at Pulau Ubin's Butterfly Hill, appeared to be a newly-eclosed individual and was cooperative for awhile during the early morning hours after a rainstorm.
Posted by Commander at 8:00 AM

Very interesting, thank you! I just observed this species for the first time in Pine Rivers Park, in South-east Queensland (Australia), behaving exactly as you say.