Revision to the Common Names of Butterflies

A Revision to the Common Names of Butterflies
Part 1 : Changes Due to Socially Unacceptable Reasons 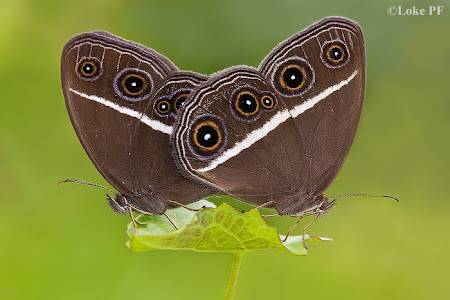 
After the excitement and fanfare of our most recent butterfly book, featuring butterflies from the South East Asian countries of Peninsular Malaysia, Singapore and Thailand died down, I managed to find some time to read the book in greater detail. Also, remembering some of the principles elaborated by Dr Kirton at his talk during the launch, I went about analysing some of the background behind the English Common name updates in the book. 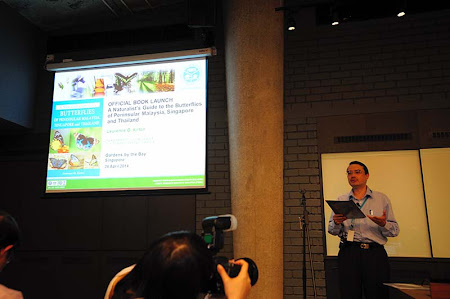 Dr Laurence Kirton speaks at his book launch in Singapore


At Dr Kirton's talk, he outlined the basic rationale behind what caused him to change some of the more widely used English common names in the region. Whether these name changes would cause further confusion amongst the butterfly enthusiasts or not, or will become standard usage in time to come, would depend on the general acceptance amongst the stakeholders. 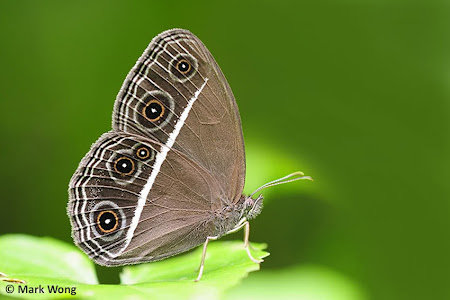 As English common names are certainly not within the exclusive domain of scientists, taxonomists or academics, these names can be coined by practically anyone who has more than a fleeting interest in butterflies. Naming conventions and fundamental rationale can sometimes be illogical and often defy common comprehension. Some names appear logical and obvious - dependent on the physical attributes of the butterfly species concerned, whilst others have dubious associations at best, or even appear questionable. 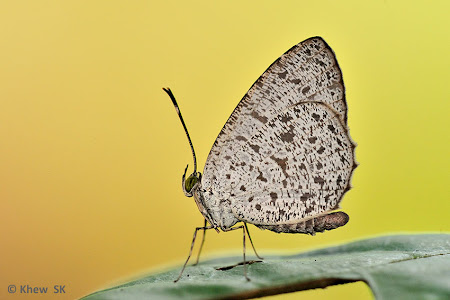 A Lesser Darkie perches on a leaf


Through common usage, some of these names have spread across the region amongst butterfly enthusiasts - some have stuck through their popularity, whilst others vary depending on the country of origin, and the 'authorities' who have named them. It is often confusing, when a particular species carries different English names in different countries. I will not go into the Chinese common names in this article, though I was told that in certain cases, a single species can have up to 6 or 7 Chinese common names across the Chinese-speaking countries! 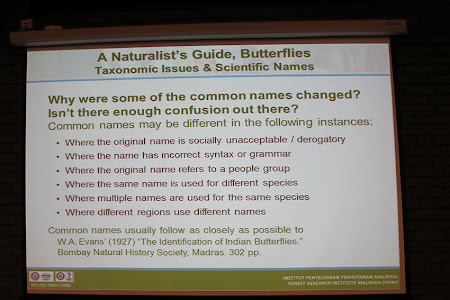 
Dr Kirton outlined the following basic principles that he adopted in his latest book, which determined whether he made changes (or not) to the English common names of butterflies in the region :
He went on to clarify that "Common names usually follow as closely as possible to WA Evans' (1927) "The Identification of Indian Butterflies" : Bombay Natural History Society, Madras 302 pp. 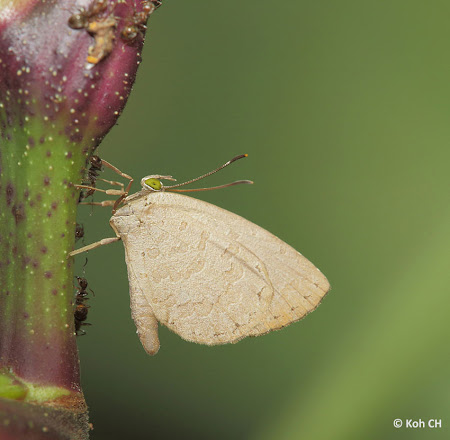 Whilst most of us would not have any issue with the principles above, the devil would be in the details and the rationale for the continued adoption of the 'common usage' names or not, would have to be evaluated and discussed from various alternative perspectives and points of view. 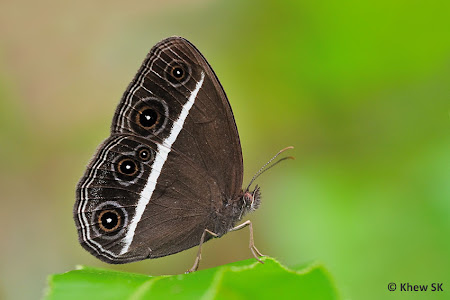 For a start, I will discuss the name change for four species of butterflies which I would deem as necessary. The rationale behind the name change would be that the original names in today's politically-sensitive environment, would fall under the category of being "socially unacceptable and/or derogatory". I had, some years back, written a piece on a butterfly that was unfortunate enough to be called a Nigger. Perhaps in an era when life was more simple and straightforward, such names would not offend anyone, but today, such a name would be considered derogatory to certain ethnic groups, and deemed unacceptable. 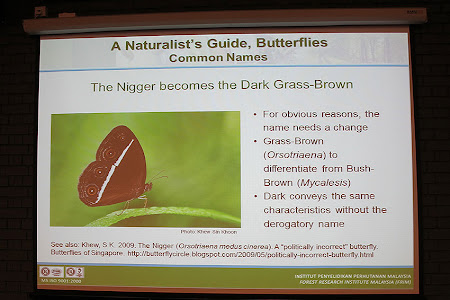 
In Dr Kirton's detailed explanations during his talk about the Nigger made a lot of sense. We support the new name coined for the species Orsotriaena medus cinerea and it will henceforth be called Dark Grass Brown. Other names suggested earlier, either already in print or on the internet are : 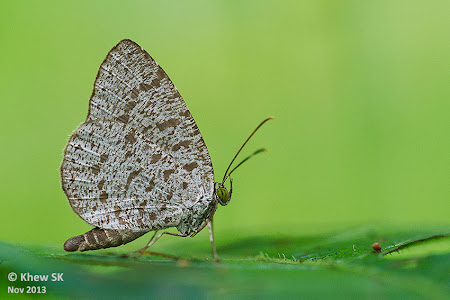 Three other species found in Singapore, also having names which are considered derogatory and have been changed in Dr Kirton's book, belong to the Miletinae subfamily. The earlier innocuous names are now considered ethnic slurs - labels used used as insinuations or allegations about members of a given ethnicity or to refer to them in a derogatory (critical or disrespectful), pejorative (disapproving or contemptuous), or insulting manner in the English-speaking world. 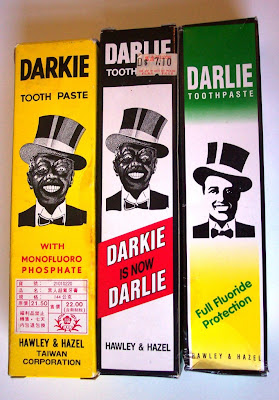 
The first of the common names is "Darkie". In the list of ethnic slurs, the word "darkie" refers to a black person (similar to Nigger) and is highly likely to cause offense to certain ethnic groups. In the consumer product world, a toothpaste company, Hawley & Hazel, used to market a popular brand of toothpaste called "Darkie". The brand well-known in Asia and Australasia, was subsequently rebranded as "Darlie" some time in 1989 to avoid the politically-incorrect and potentially derogatory reference to Afro-Americans. 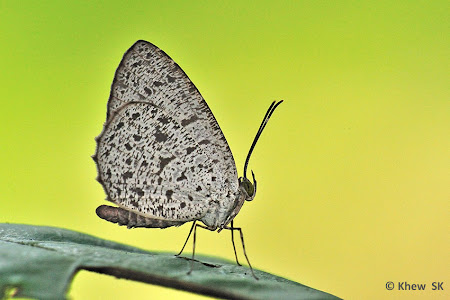 
In our butterfly world, there is a species known as the Lesser Darkie (Allotinus unicolor unicolor). The English common name is a bit of a mystery, as the butterfly neither black or has any features that suggest the name. Dr Kirton has renamed this species as the Lesser Darkwing. It is a name that avoids the controversy of an ethnic slur and appears to be safe for use without offending anyone. So Lesser Darkwing it will be! 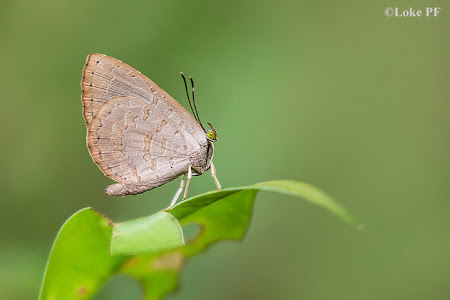 
A third generic common name, which also has ethnically derogatory connotations, particular in common usage in the United States, is the "Brownie". Whilst less well-known than Nigger and Darkie, the word Brownie is generally used as a derogatory slur to refer to a :
a. (US) a person of mixed white and black ancestry; a mulatto.
b. (US) a young, brown-skinned person 1940s–1950s.
c. (US) derogatory name to refer to brown Mexican people. 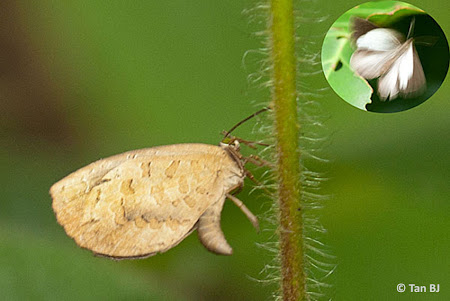 Blue Brownwing, underside and (inset) upperside of the wings

There was even a recent article that highlights the use of the word "Brownie" (in a non-complimentary way) to refer to US President Barack Obama! Hence, the avoidance of the potentially controversial word "Brownie" is timely and should be removed from our butterflies' names as well.  Having said that, however, I wonder when someone will change the name of my favourite chocolate "brownie" dessert! But that is certainly another debate for another forum. 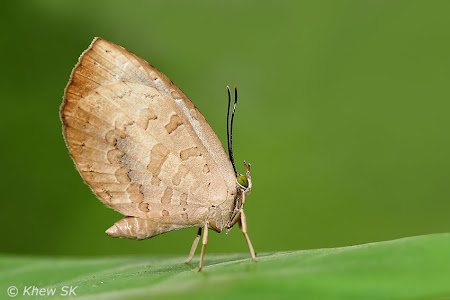 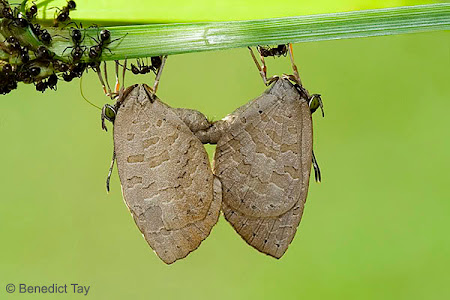 In summary, these are the four species relevant to the Singapore butterfly fauna that ButterflyCircle will be making changes to - from Nigger to Dark Grass Brown; from Lesser Darkie to Lesser Darkwing; from Blue Brownie to Blue Brownwing and from Bigg's Brownie to Bigg's Brownwing.  We accept these changes due to the rationale that Dr Kirton has articulated in his presentation, and we see no reason to disagree with the reasons behind the change.  However, there is still room for debate, and the changes to the English common names, like the regular taxonomic revisions to species' scientific names, will probably not be cast in stone! 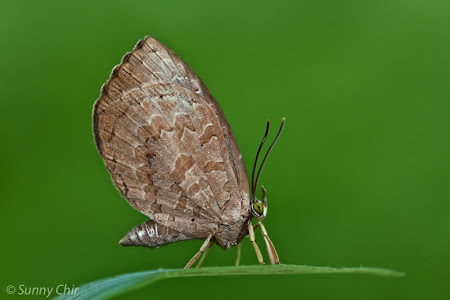 Whilst our hardcopy Field Guide to the Butterflies of Singapore 2010 has used these original names and no amendments can be made at this point in time, any future editions will make these changes accordingly. Our online collaterals will make the changes henceforth. All the four species' names fall under the collective category of "socially unacceptable" or "derogatory" in terms of negative ethnic slurs. 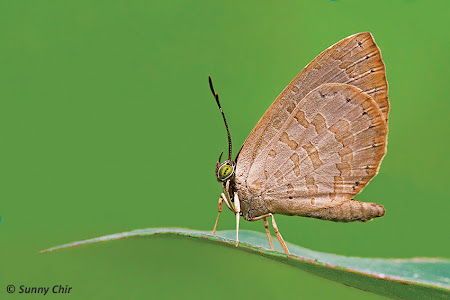 We will evaluate other name changes as proposed by Dr Kirton in our forthcoming blog articles, where various ButterflyCircle members have given their opinions which may not necessarily concur with Dr Kirton's proposed name changes. These will be dealt with eventually, and discussions will be made regarding our opinions which offer contrarian and alternative viewpoints to those raised by Dr Kirton. 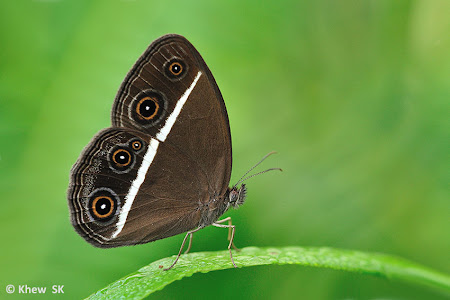 In the meantime, we will take our time to digest and try to understand the backgrounds behind some of these name changes and we will not rush to make any hasty changes. Some of these original names have sentimental, emotional, historical or even nationalistic (!) connotations, and even if the names are changed, it may take a long time before they become widely accepted for daily usage amongst butterfly enthusiasts.

Posted by Commander at 6:21 PM