Life History of the Blue Jay 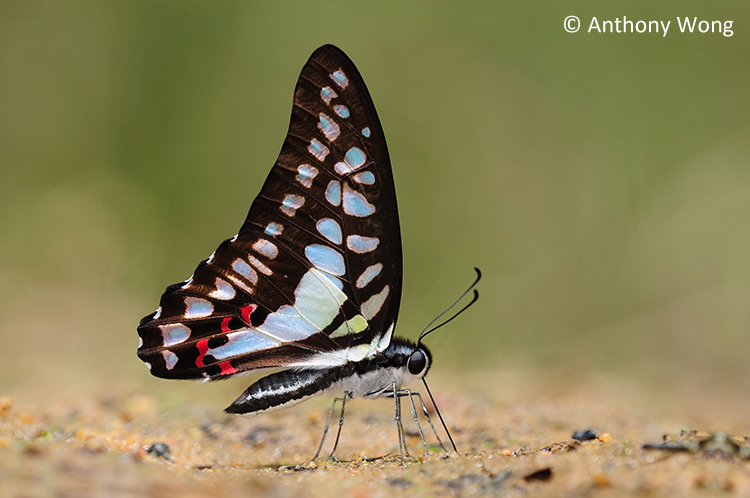 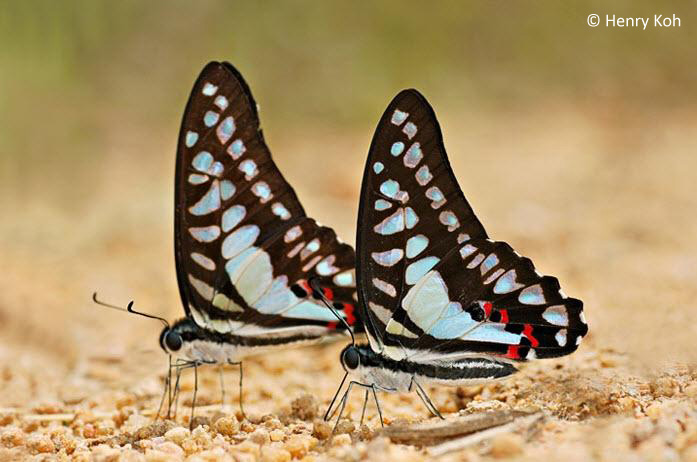 A pair of puddling Blue Jay. 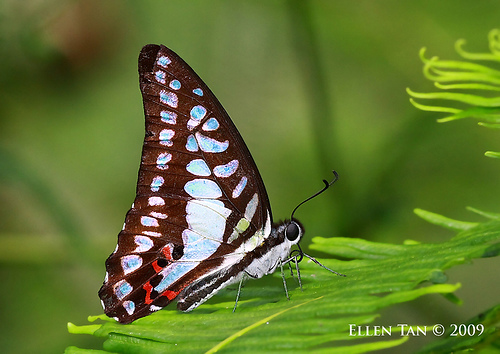 A Blue Jay perching on a leaf.

Physical Description of Adult Butterfly:
As with most Graphium species, the wings are produced at the forewing apex and hindwing tornus, and the inner margin of the hindwing bends inwards. On the upperside, the wings are black with a broad bluish macular band running from the sub-apical area of the forewing to the basal area of the hindwing. There is also a series of blue streaks in the cell of the forewing. A series of blue submarginal spots is present in both fore- and hindwings. On the underside, the same spotting pattern can be found against a dark brown base, with the spots larger and more silvery green. Additional red and black spots are featured on the hindwing. Unlike the lookalike species, the Common Jay, the black costal bar in the hindwing of the Blue Jay does not have a red spot, and it is joined to the black basal band. 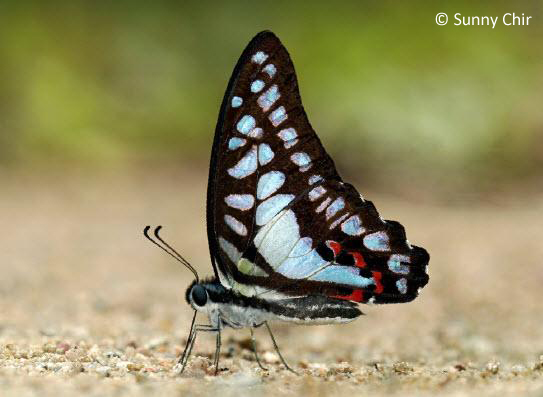 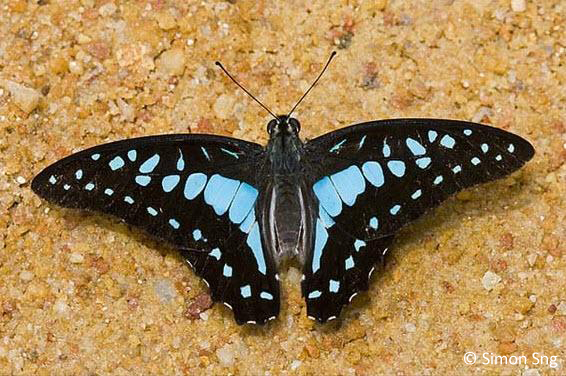 Field Observations of Butterfly Behaviour:
Blue Jay is common in Singapore and is oftern seen flying up and down jungle tracks in the nature reserve on sunny days. The males are often observed puddling at damp forest paths and stream banks. The adults are fast flyers and have an "erratic" flight. 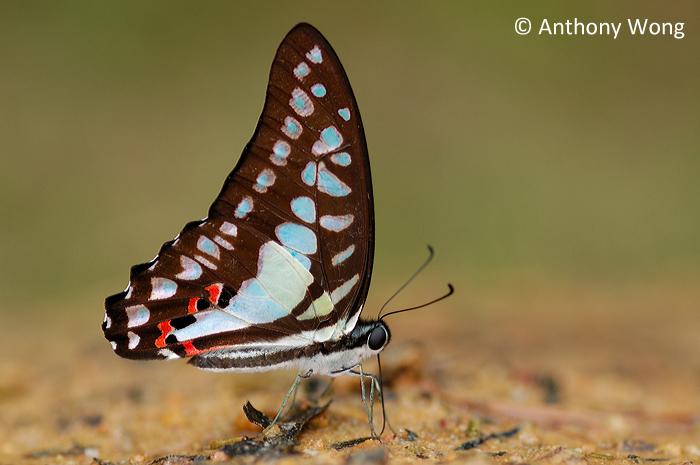 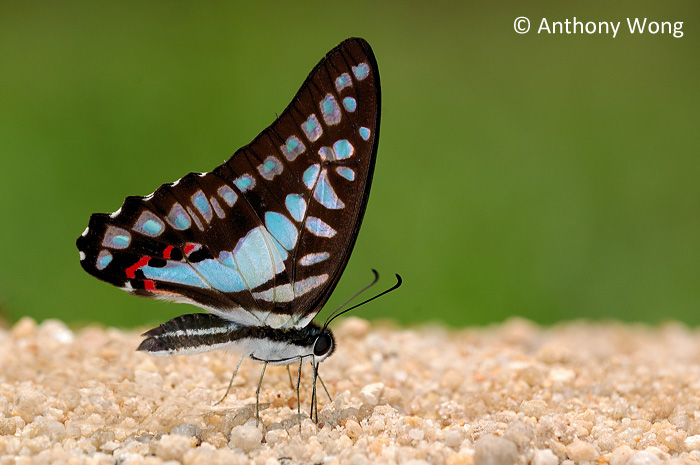 Early Stages:
In Singapore, so far only one local host plant, Artabotrys wrayi, has been recorded. However, it is likely that a number of other Artabotrys spp. or generally in the Annonaceae family serve as its local host plants as well. The caterpillars of the Blue Jay feed on the young and immature leaves of the host plant, and has a habit of resting along the main vein of a leaf upperside. 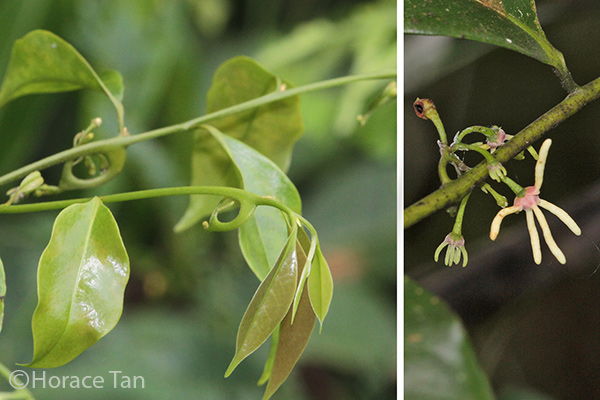 The eggs of the Blue Jay are laid on young leaves of the host plant on either the upper- or underside. The spherical egg is initially creamy white with a diameter of about 1.1-1.2mm. 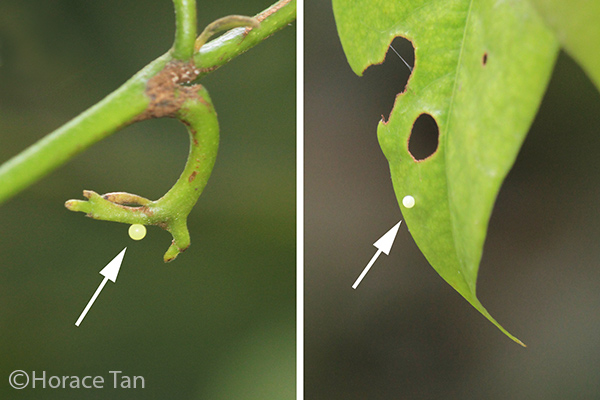 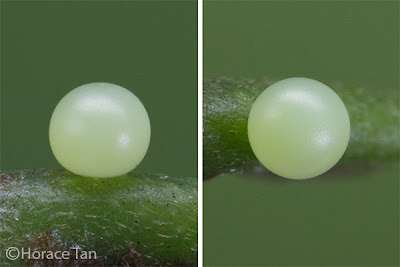 Two views of an egg of the Blue Jay. 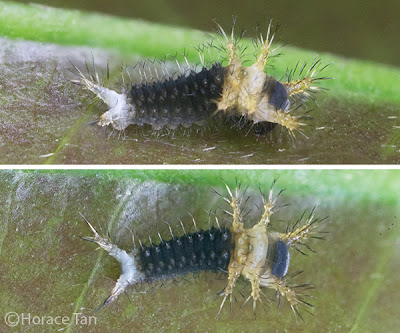 As it feeds and grows in the first instar, the base body color changes from black to brown, its thoracic segments enlarged and turn pale golden brown. The first instar lasts about 3 days with the body length reaches up to 6-6.5mm. 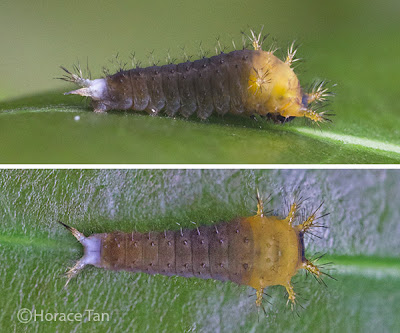 In the 2nd instar, the 2nd and 3rd thoracic segments are much enlarged compared to the other body segments. The thoracic pairs of spines are drastically reduced in size in proportion to the body, with the first (prothoracic) pair longer and larger compared to the other two (which are black in colour). The head capsule is yellowish brown, and the sub-spiracular area of the abdominal segments whitish. The body remains brown to dark brown throughout most of this instar, though there is a gradual decolorization as growth progresses. This instar lasts for about 2 days, and the body length reaches 10-11mm. 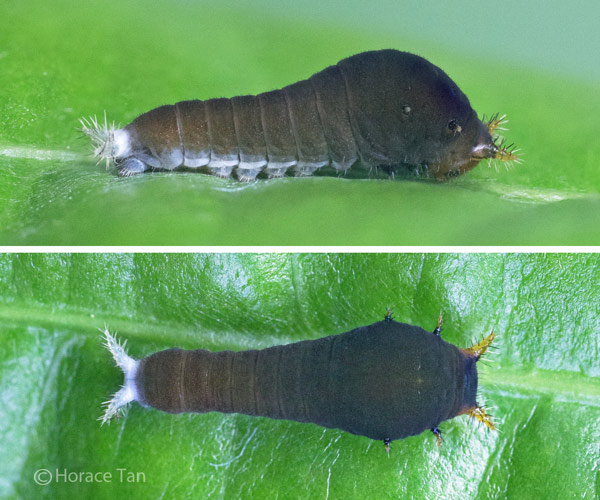 Two views of a 2nd instar caterpillar, early in this stage, length: 7mm. 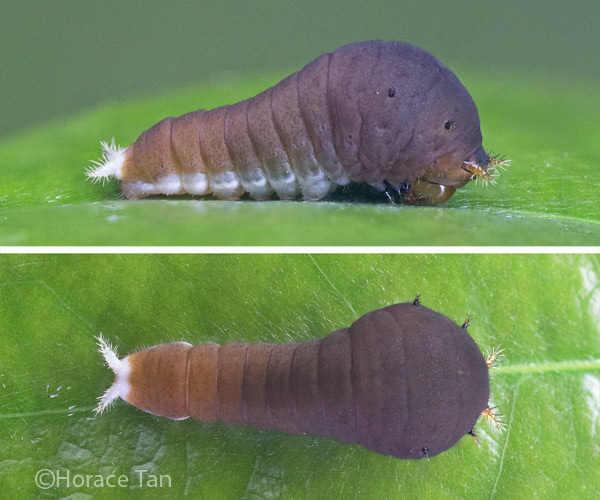 Two views of a 2nd instar caterpillar, late in this stage, length: 10mm. 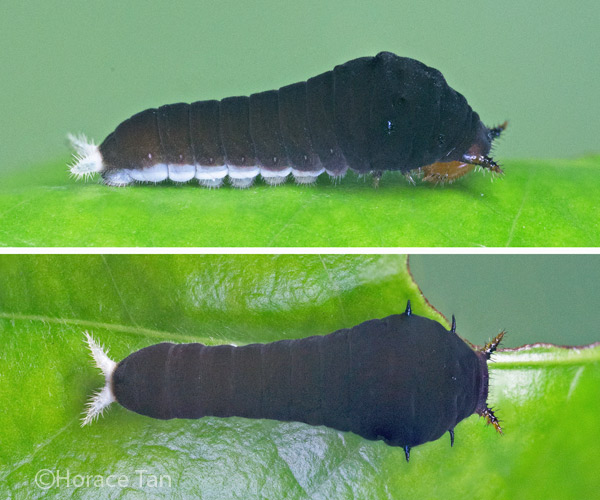 Two views of a 3rd instar caterpillar, early in this stage, length: 12mm. 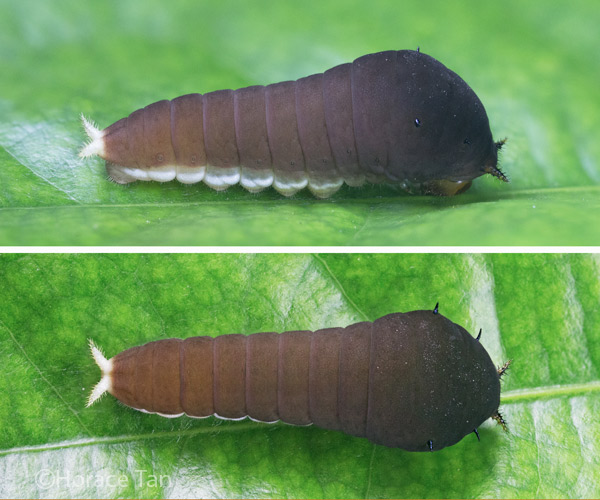 Two views of a 3rd instar caterpillar, late in this stage, length: 19mm. 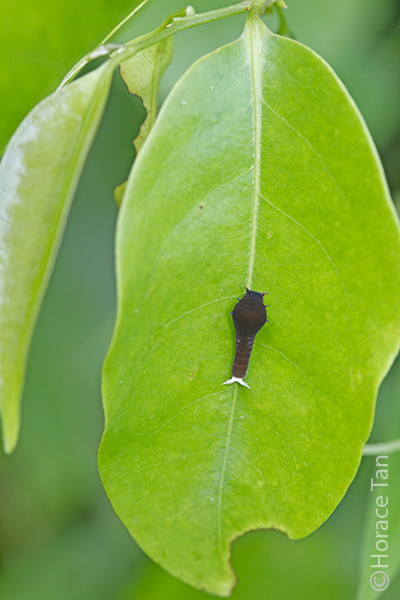 A 3rd instar caterpillar of the Blue Jay found in the nature reserve.

The body of the 4th instar caterpillar is initially pale pinky brown but as growth progresses, the colour turns paler to either pale brown (brown form) or yellowish green (green form) towards the end of this instar. The caterpillar has a yellowish to yellowish brown head capsule, and the base of the metathoracic pair of spines is vaguely encircled in ring of yellow or pale brown. The dark thoracic pairs of spines also take on a bluish sheen when viewed at certain perspectives. Now the sub-spiracular area of all body segments are whitish to varying extent. This instar lasts about 2-3 days with the body length reaching about 23-26mm. 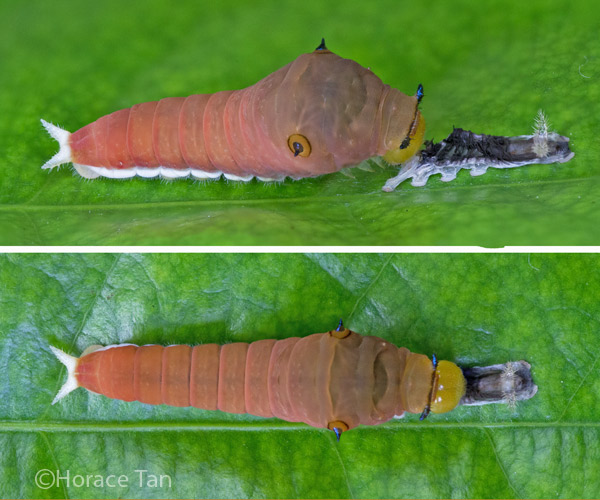 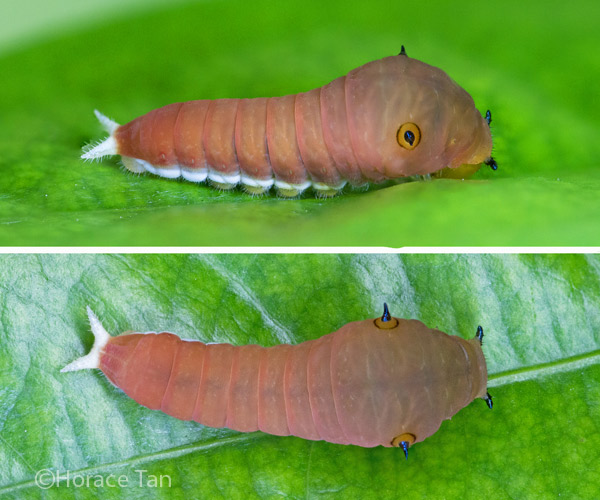 Two views of a 4th instar caterpillar, early in this stage, length: 17mm. 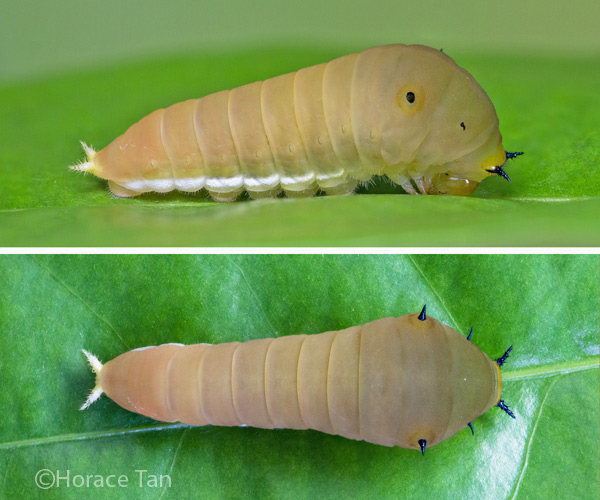 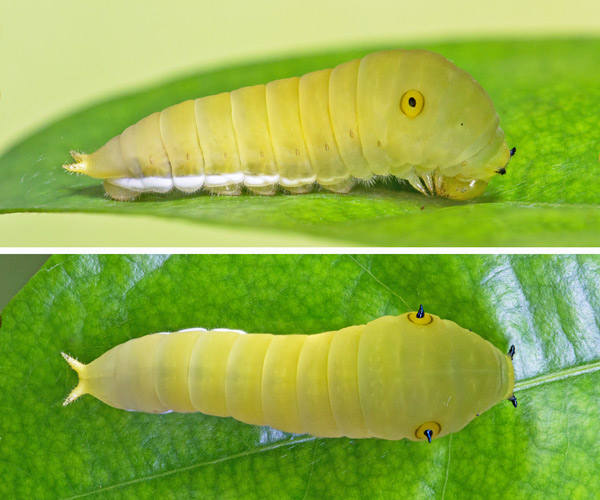 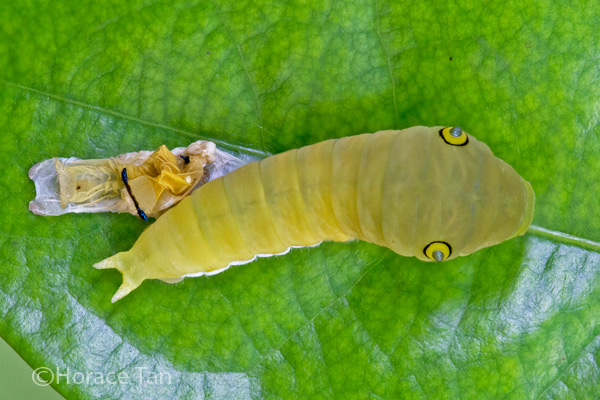 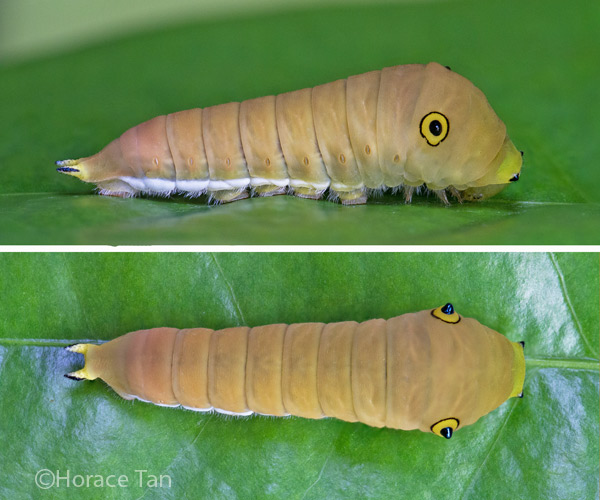 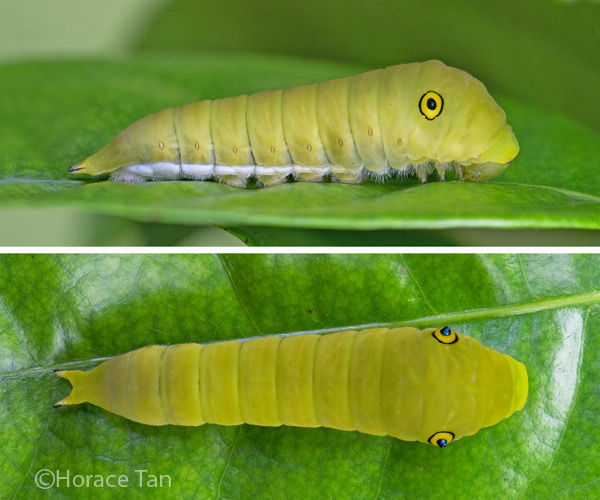 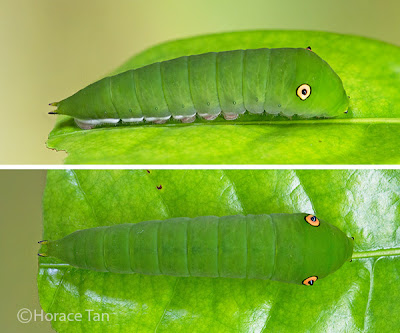 Two views of a 5th instar caterpillar, late in this stage, length: 42mm.

Towards the end of the 5th instar, the body gradually shortens in length and turns completely pale lime green. The caterpillar wanders around for a pupation site and eventually comes to rest on the underside of a leaf. Here the caterpillar prepares and secures itself with a silk pad and a silk girdle, typically with the silk pad sited at the leaf base. 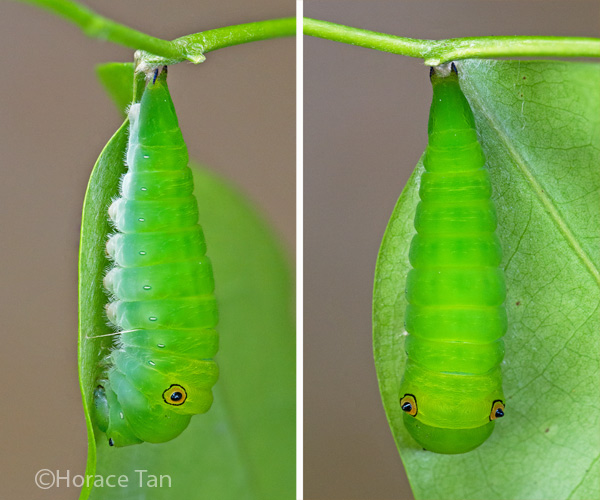 Two views of a pre-pupatory larva of the Blue Jay.

A Blue Jay caterpillar moulting to its pupal stage. 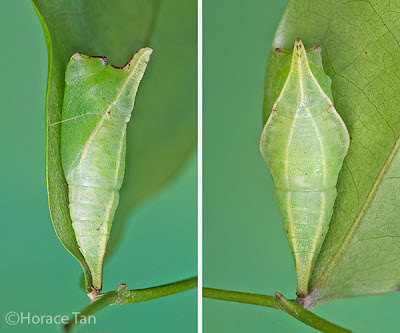 Two views of a pupa of the Blue Jay.

The pupal period typically lasts for 9 days, and the pupa turns black in the wing pads the night before eclosion. The bluish-green spots on the forewings are visible through the pupal skin at this stage. The adult butterfly emerges the next morning to commence the adult phase of its life cycle. It is noteworthy that in the bred specimens, there were two which had their pupal periods stretched to 69 and 167 days respectively, a "overwintering" phenomenon typically observed in temperate regions. 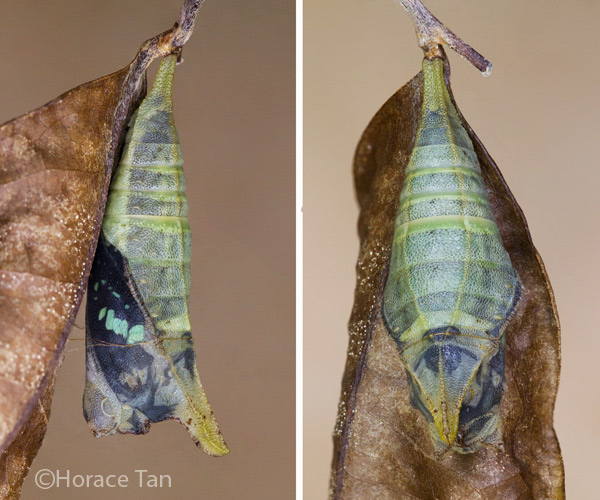 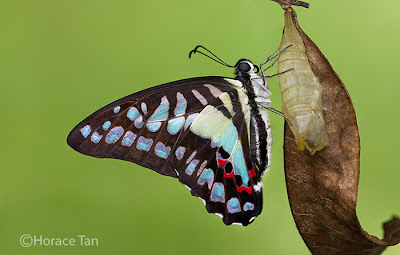 A newly eclosed Blue Jay resting on its pupal case.