Life History of the Chestnut Bob 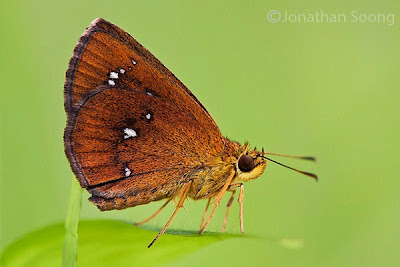 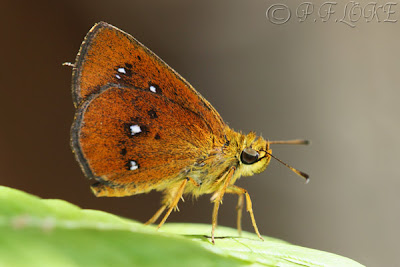 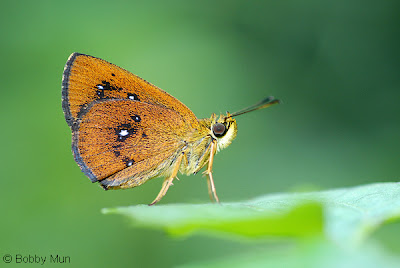 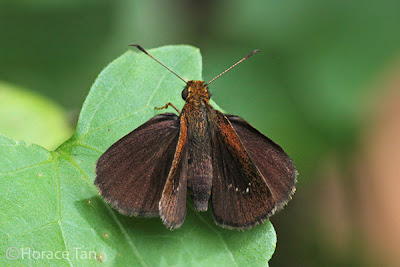 On the upperside, both sexes are dark brown. On the forewing, the male has an obscure, pale rusty-coloured post-discal band whilst the female has a short series of white spots instead. On the underside, the wings are dark brown in the lower half of the forewing but yellowish brown on the entire hindwing and the costal half of the forewing. On the forewing, there is a spot at cell-end and there are post-discal spots in spaces 1b, 2-6 and 8. On the hindwing, there are post-discal spots in spaces 1b, 5 and 7. These spots are typically embedded in black and some of these spots could be absent in various specimens. 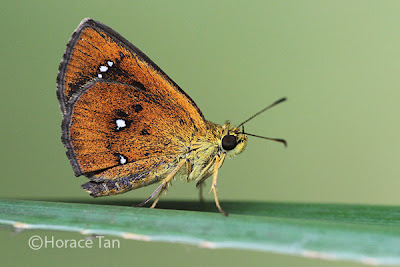 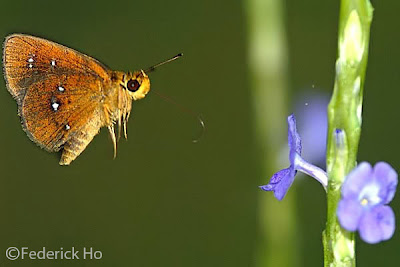 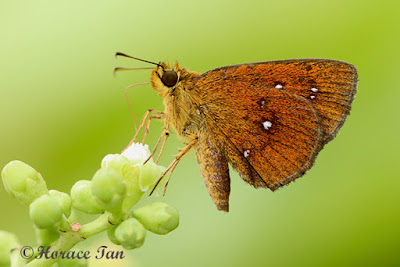 Chestnut Bob is a rather common skipper species in Singapore and can be readily encountered across the island in parks, gardens and also in the nature reserve, typically in sunlit grassy patches. The adults visit small wild flowers for nectar and fly close to the ground. 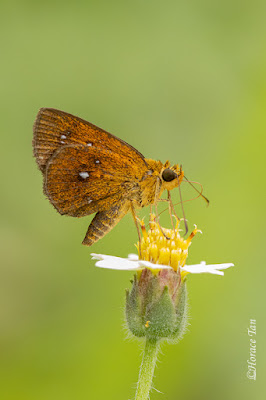 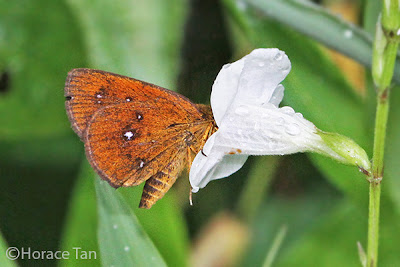 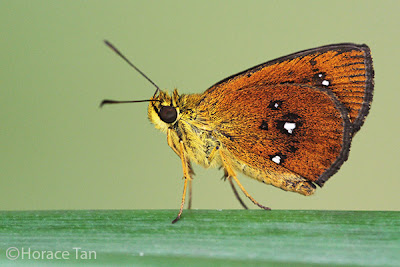 Across the regional range of its distribution, the caterpillars of the Chestnut Bob feed on a number of grass species. Here in Singapore, Ottochloa nodosa and Axonopus compressus have been recorded so far as its larval hosts. Both are very common grass species in Singapore. The caterpillars of the Chestnut Bob feed on leaves of the host plant, and live in shelters made by joining edges of a grass blade together with silk threads. As with other skipper species, the caterpillars have the habit of forcefully ejecting their frass pellets. 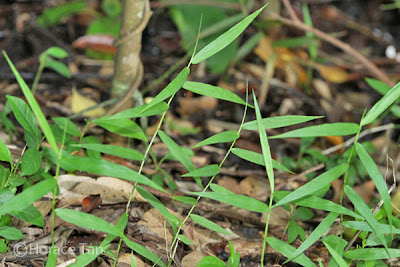 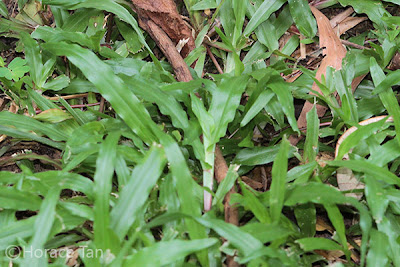 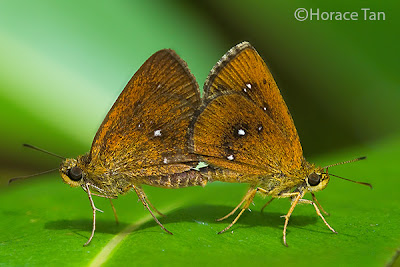 A mating pair of the Chestnut Bob.


The eggs are laid singly on the upperside of a leaf of the host plant. Each dome-shaped egg is reddish mottled with pale pinky patches. The base diameter is about 1mm. 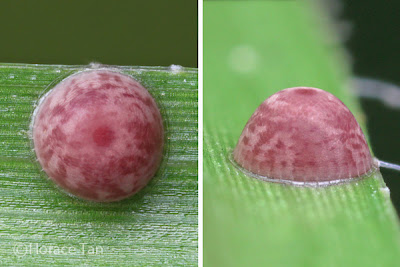 Two views of an egg of the Chestnut Bob. 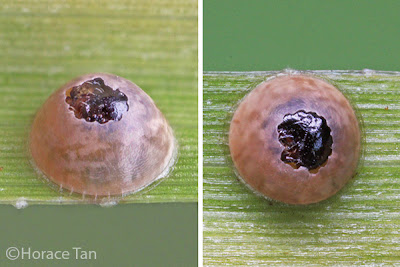 Two views of a mature egg with the caterpillar in the midst of nibblying away the egg shell to emerge.


It takes about 4-4.5 days for the egg to hatch. The young caterpillar eats just enough of the shell to emerge, and will devour the rest of the egg shell after emergence. The newly hatched has a length of about 2.2mm. Its yellowish orange body is covered with very short dorso-lateral and sub-spiracular setae. A tuff of long setae can be found at the posterior end. The head capsule is entirely black and there is a black collar just behind the head on the dorsum of the prothorax. 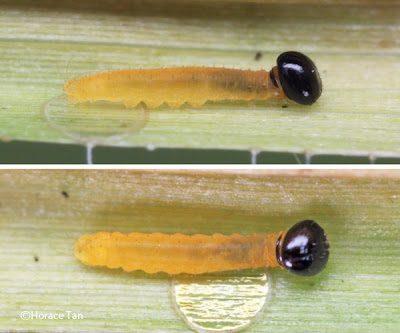 Two views of a newly hatched 1st instar caterpillar, after completely devoured its egg shell (the circular patch is the base of the egg shell), length: 2.2mm.


The newly hatched constructs its leaf shelter soon after it is done with the egg shell. The body color changes to pale yellowish green after a few feeding sessions on the leaf. The 1st instar takes about 4-4.5 days to complete with body length reaching 4.5mm. 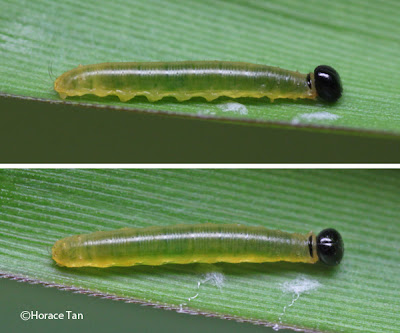 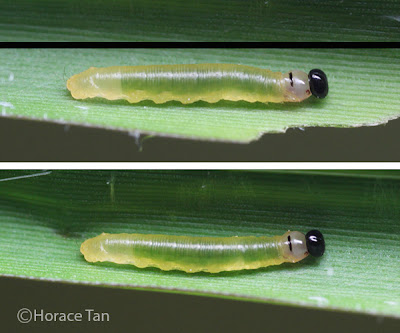 Two views of a late 1st instar caterpillar, dormant prior to its moult, length: 4mm.


The 2nd instar caterpillar is yellowish with a green undertone. At the posterior end, the tuff of long setae is replaced with a few relatively long setae. The black prothoracic collar is still present in this instar. This instar lasts about 3-4 days with the body length reaching about 8mm. 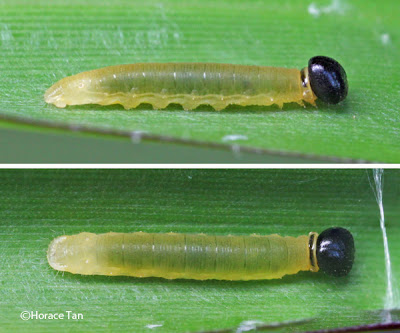 Two views of a 2nd instar caterpillar, early in this stage, length: 4.2mm. 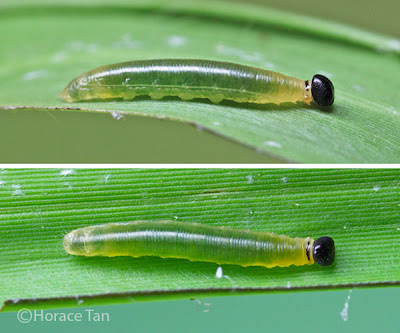 Two views of a late 2nd instar caterpillar, dormant prior to its moult, length: 7mm.


The 3nd instar caterpillar resembles the 2nd instar caterpillar but its body more whitish than yellowish. The black prothoracic collar is still present. Whitish dorso-lateral and lateral bands are discernible. In some specimens, the black head capsule has been observed to feature lateral pale brownish patches. This instar lasts about 4-5 days with the body length reaching about 12mm. 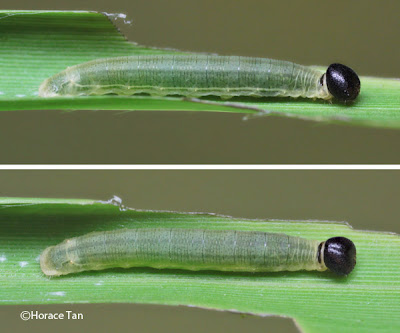 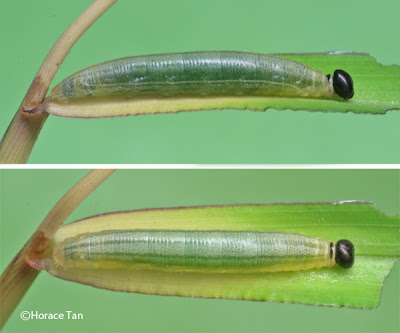 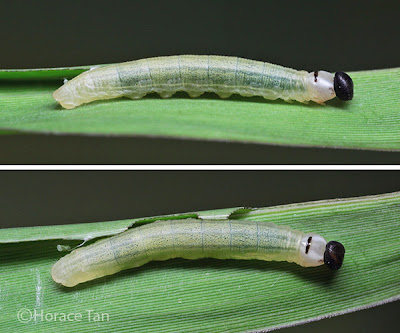 Two views of a late 3nd instar caterpillar, dormant prior to its moult, length: 10mm.


The 4th instar caterpillar resembles the 3rd instar caterpillar closely but with the black prothoracic collar completely absent. The head capsule is now brown with large whitish patches on both sides. This penultimate instar lasts 6 days with the body length reaching up to 17mm.

Two views of a 4th instar caterpillar, early in this stage, length: 11.3mm. 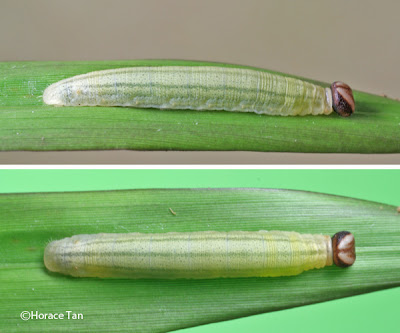 
In the 5th (and final) instar, the head capsule is dominated by large white to yellowish lateral patches. The periphery and front clearvage lines are marked in yellowish brown. The body is strongly whitish to yellowish with a green undertone, with broad dorso-lateral and lateral bands. This instar takes about 7 days to complete with the body length reaching up to about 26mm. 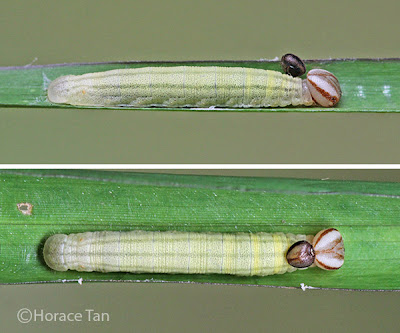 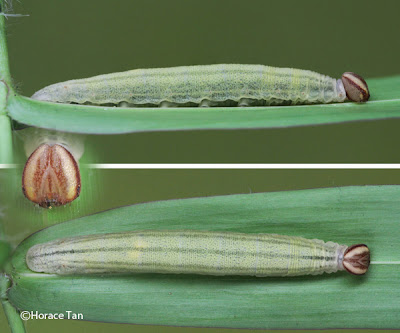 
Towards the end of the 5th instar, the body of the caterpillar shortens and its coloration changes uniformly to beige brown. Typically it picks the underside of a grass glade to construct its pupation shelter. Within the shelter, it spins a silk pad to secure itself. Whitish waxy substance is deposited on the inner wall of the shelter in moderately large quantity. It then becomes dormant for the prepupatory phase which lasts for about 1-1.5 day. 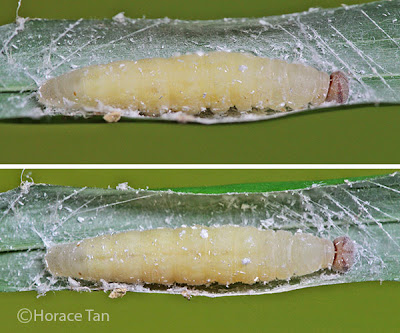 Two views of a pre-pupa of the Chestnut Bob.


The pupa secures itself to the substrate with a cremastral attachment to the silk pad. It is beige brown mostly with its body surface covered in short and brown setae. There are two rather large "eye" markings at the anterior end. Length of pupae: 18-19mm. 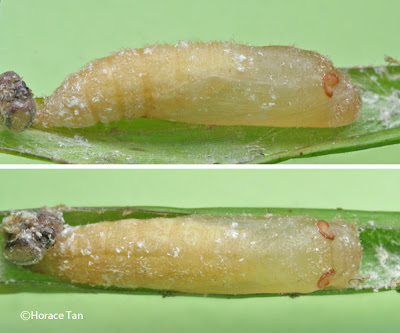 Two views of a pupa of the Chestnut Bob.


On the last day of the pupal period, the pupa becomes mostly dark brown to black. The next day, after about 8 days of the pupal phase, eclosion takes place with the adult emerging from the pupal case. 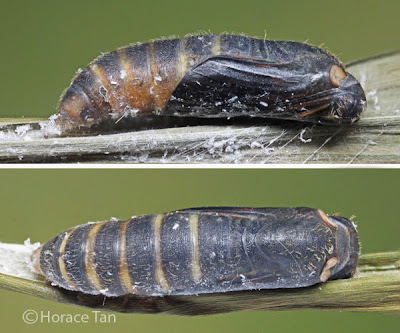 Two views of a mature pupa of the Chestnut Bob. 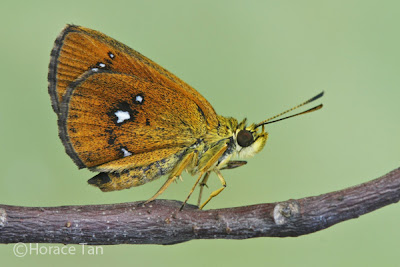