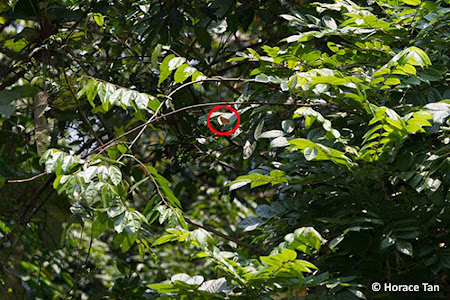 
Whilst out on a leaf-run to document the early stages of a Papilio species, ButterflyCircle member Horace Tan spotted a relatively large fast-flying orange butterfly fluttering around at the tree tops. Unable to get close for a better shot, Horace took an 'insurance' shot from afar.  For a moment, the orange butterfly may have been a male Cruiser (Vindula dejone erotella) 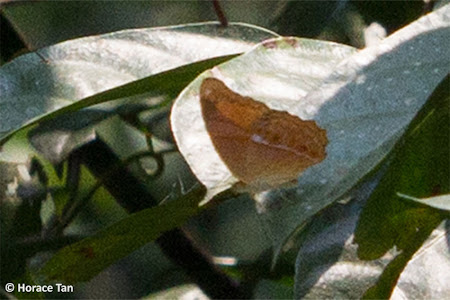 A zoomed in shot showing the mystery butterfly


Upon reaching home, Horace zoomed it on the orange butterfly and it didn't look anything like the Cruiser. The highly cropped shot shown above suggested that it was something that has not been seen for a long time in Singapore. Referring to Butterflies of the Malay Peninsula 4th Edition by Corbet & Pendlebury (C&P4), the butterfly looked very similar to the Malay Yeoman (Cirrochroa emalea emalea) 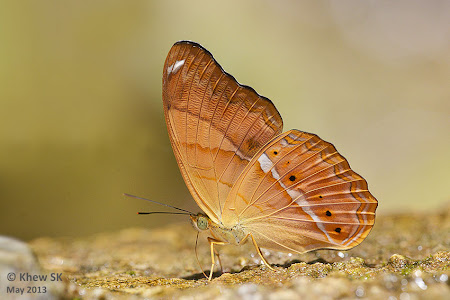 A shot of a Malay Yeoman taken in Malaysia for comparison


Scrutinising the details of the cropped shot, the underside of the butterfly matched the Malay Yeoman. The forewing discal band which is narrow at the dorsum and widens significantly at the costa can be clearly seen. The distinguishing constriction of the discal band on the hindwing in spaces 5 & 6 can also be seen in the shot, confirming that this species is indeed the Malay Yeoman! 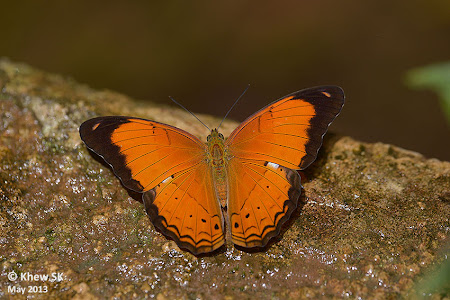 Upperside of the Malay Yeoman (shot in Malaysia)

Further reference to C&P4 indicated that the Malay Yeoman was marked [S] designating it as a "species which, so far as known, have not been taken again in Singapore during the present century". (Note that the present century meaning the 20th century as the 4th Edition of the book was updated in 1992). This species is described as fulvous orange above, with a black distal margin. We now record is as species #307 in the Singapore Butterfly Checklist. As it is a common species in Malaysia, observers should continue to look out for it in the Central Catchment Nature Reserves in Singapore, where Horace Tan saw this species. 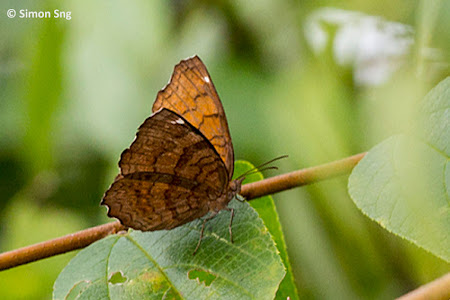 Another species that surprised members of ButterflyCircle on our regular weekend outing on 12 Oct 2013 was the Angled Castor (Ariadne ariadne ariadne). The species has reddish brown upperside traversed by sinous black lines and having a prominent white subapical streak on the forewing. The Angled Castor is described as local and found in forest clearings. 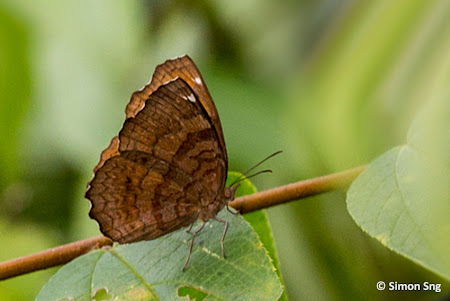 Another shot of the same Angled Castor with wings folded upright

Indeed, ButterflyCircle members Simon Sng and Loke PF came across this species at a forest clearing where other species were present due to the mass fruiting of the Singapore Rhododendron (Melastoma malabathricum). Both photographers managed to take a few shots of the Angled Castor before it made its way to the treetops and disappeared. 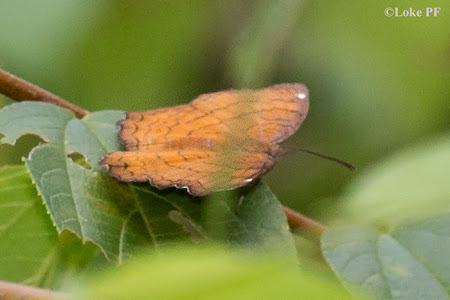 The shots shown here confirmed the existence of the Angled Castor beyond any doubt. The single black line just beyond the cell end and the white subapical spot on the upperside and underside of the forewing validates the identity of the Angled Castor. The other likely species that occurs in nearby Johor in Malaysia, is the Malay Castor (Ariadne isaeus isaeus). However, this species is described as having a narrow, zigzagged orange brown band just beyond the cell end of the forewing, and without a white apical spot. 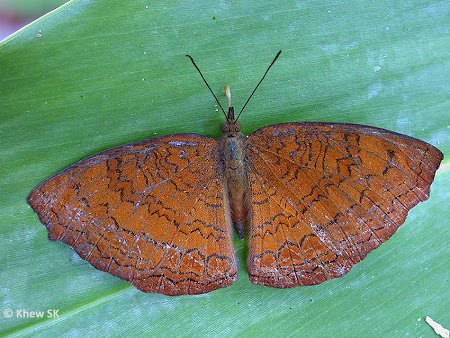 Again, a species that was encountered in the forested nature reserves of Singapore suggests that there may still be more surprises in our forests that have yet to be discovered. The Angled Castor is considered a re-discovery, as the C&P4 checklist indicates this species as extant in Singapore. The importance of our central catchment core cannot be overstated, as it is a critical sanctuary to a diverse range of floral and faunal biodiversity in Singapore. 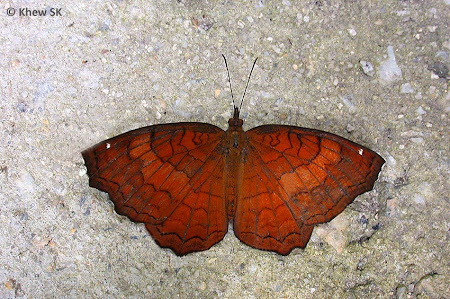 An Angled Castor shot in Penang, Malaysia for comparison

The Angled Castor is added to the Singapore Butterfly Checklist as species #308. It is hoped that these two species will continue to be spotted in Singapore even though at the moment, they would be considered 'seasonal visitors'. However, given the period that both have been spotted in Singapore, the postulation that these species may have been carried over by the prevailing winds from Malaysia may be unfounded. This is because the prevailing winds in the months of mid-Aug to Oct 2013, are largely from the south-west!

The Singapore Butterfly Checklist is hence updated to 308 species as at end Oct 2013. There are a number of Hesperiidae and Lycaeninae which are currently under investigations and will be added to the Singapore Checklist by the end of this year when all the validations are complete.

Posted by Commander at 4:41 PM

Amazing. Its great to see that the butterflies are slowly returning after the major loss we suffered back in the developing days. However, I was thinking, perhaps these species could have been surviving all along, with recent developments making them more accessible to us.