Butterfly of the Month - November 2013 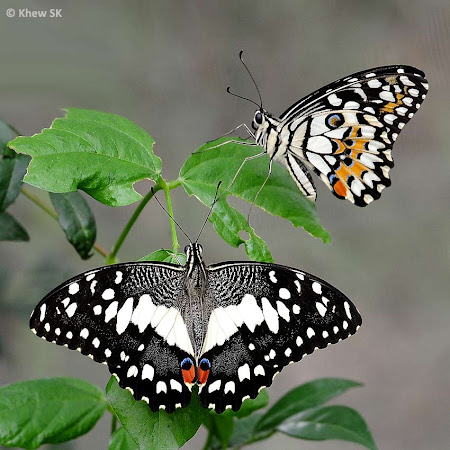 A two-in-one shot, showing the upper and under side of the Lime Butterfly


The month of November is upon us all too soon! The 2nd of November 2013 saw the 400,000-plus Indian community in Singapore celebrating Deepavali (or Diwali, which marks the beginning of the Hindu New Year according to the Lunar Calendar. Also known as the Festival of Lights, Deepavali celebrates the victory of Goodness over Evil and Light over Darkness - as it ushers in the new year. 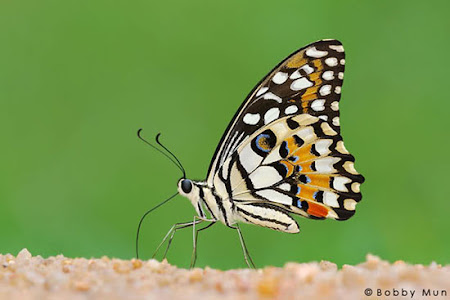 Over in the Philippines, what is believed to be the strongest tropical cyclone ever recorded to make landfall struck the areas covering Biliran Island, Eastern Samar, Leyte, northern Cebu, Samar, Southern Leyte and Luzon. The city of Tacloban in Leyte was badly hit by the 310 km/hr winds, and the estimates of casualties numbered in the thousands. The category 5 "super typhoon" Haiyan has come and gone, leaving entire communities decimated in its wake and the survivors have just begun the potentially long and traumatic process of getting their lives back to normalcy again. Our sympathy and prayers go to all those affected. 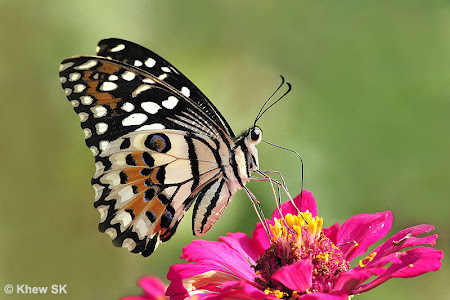 One wonders if these extreme weather phenomenon that we experience today is attributed to the process of climate change and global warming? Even in Singapore the weather patterns that have changed over the past few years leaves one wondering if the designs of our infrastructure and buildings would be able to withstand the onslaught of heavy rains and strong winds. Already, unprecedented flash floods in some areas of Singapore have required the government departments to expedite the drainage works to accommodate the inundation of our little island with the intensity and volume of rainfall rarely encountered in the past. 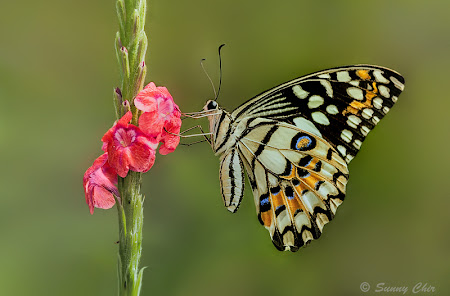 And there will certainly be the debates on whether the extent of deforestation in many countries will continue to increase, leaving the cleared land even more vulnerable to extreme weather conditions. Singapore, our little 712 sq km island nation has been spared natural disasters like typhoons, tsunamis and earthquakes so far. But if we were to be affected one day, will we be ready? 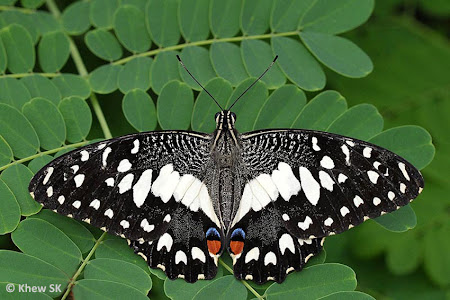 Over to our Butterfly of the Month for November, we feature the humble and common urban butterfly, the Lime Butterfly (Papilio demoleus malayanus). Attractively coloured with black and pale yellow markings on the upperside forming an irregular band running from the forewings to the hindwings. The underside is pale yellow with black markings. Both sexes are mostly yellow with black streaks and irregularly-shaped spots. On the hindwing, several black spots are lined with blue striae. There is a series of orange post-discal bars on both hind- and forewings. 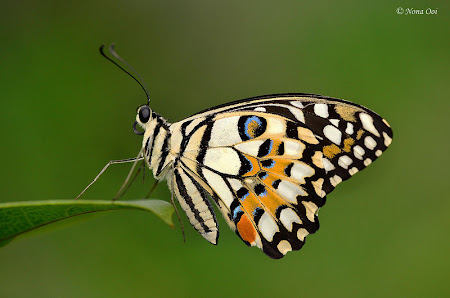 The sexes are very similar. The distinguishing characteristic can be found in space 1b on the hindwing. There is a red spot in both sexes. In the male, this spot is capped with a narrow blue lunule with a very narrow intervening black gap. In contrast, the red spot and the blue lunule in the female have a rather large black spot between them. Like in all Papilionidae, the Lime Butterfly has all six legs fully developed. The eyes are 'opaque' and jet black. 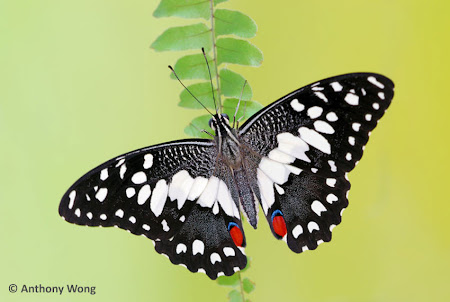 The Lime Butterfly is a fast flyer and its rapid and erratic flight makes it very challenging to shoot whilst in flight, although not impossible. There have been excellent shots taken by ButterflyCircle members where the Lime Butterfly was photographed in mid-flight whilst feeding on flowers. At times, the butterfly stops to rest amongst shrubbery, either with its wings folded upright, or opened flat to sunbathe. 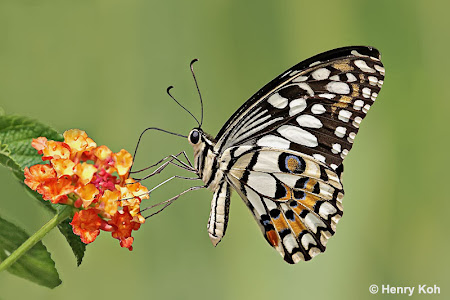 A Lime Butterfly feeding on the flowers of Lantana 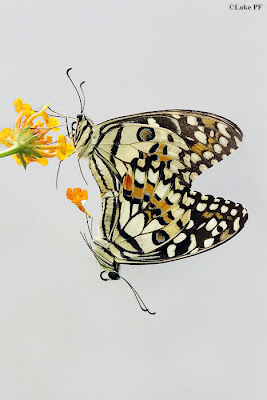 We have had reports of caterpillars found on a potted Citrus plant on the 13th storey of a high rise apartment in Singapore. The owner was quite certain that the plant was over a year old (implying that the caterpillars were not stowaways on a new plant and brought up to that height) and placed along the common corridor of the apartment, suggesting that the visiting female Lime Butterfly flew up to that height (about 40m high) to oviposit on the host plant. 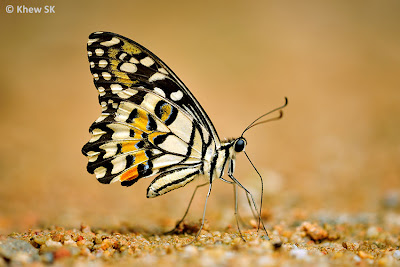 The Lime Butterfly can be found in parks and gardens, often seen feeding on Lantana and Ixora flowers, flying rapidly amongst the greenery. It is sometimes observed at the fringes of the forested nature reserves and even in the nature reserves. Males of the species have been observed to puddle at the sandbanks of forest streams, in the company of other Papilionidae, Pieridae and Lycaenidae butterflies. 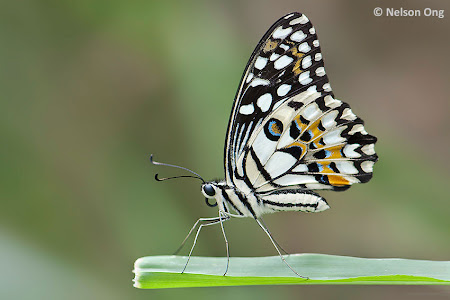 Hi u talked abt  climate change in SG  in your blog & this is still  relevant in 2016.  In relation to conservation of butterflies, would u think picking up Lime Caterpillars from  their Host Lime Plants in our backyard gardens to rear them & then release them when they enclose will help? I can find about 10 Caterpillars ( various Instars ) on Ave a month. A friend of mine keeps urging me to take the caterpillars in to save them from regular NEA mozzie foggings & rain ( water kills the eggs & early Instars?)  I already had 15 Pet caterpillars turn into butterflies in the past year.  Friend prob has 3 x that # .  What are the survival rates in Captivity indoors vs in the "wild" ( aka in home gardens)?
Also, Are  SG butterfly spp. & #s monitored annually like Bird watchers do a Bird Census annually?