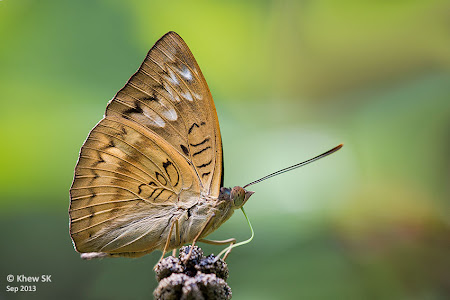 
The Malay Baron is a forest-dependent butterfly, and is seldom seen in urban parks and gardens, except perhaps for those which are in close proximity to the nature reserves in Singapore. All three forms of the males are seen with regularity, and in some instances, two or more forms are seen in the same vicinity.  This male form-decorata was photographed in the nature reserves feeding on the ripened fruit of the Singapore Rhododendron (Melastoma malabathricum)

*Polymorphism in biology occurs when two or more clearly different phenotypes exist in the same population of a species — in other words, the occurrence of more than one form or morph.
Posted by Commander at 1:14 PM