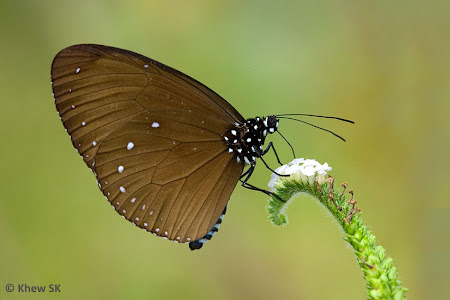 
Following up from my earlier article about bird-butterfly name sharing, this second article looks at two more groups of butterflies which bear the same collective name as birds.  Obviously, the authors who coined the names for these butterflies probably captured the physical attributes of the butterflies that resemble their avian namesake. 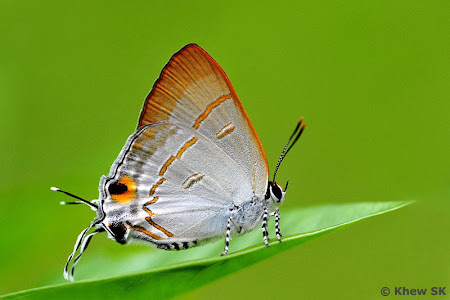 
The first group deals with predominantly dark coloured butterflies of the Danainae subfamily. The characteristic black or blue butterflies with prominent white spots and streaks belonging to the genus Euploea are collectively called "Crows". In the avian world, Crows are members of a widely distributed genus of birds, Corvus, in the family Corvidae.

A screen capture of images after googling "Crows"

Here in Singapore, crows are considered pests that are unhygienic, tearing apart rubbish bags and leaving a mess. They are also known to pinch food and leftovers from hawker centres and even homes. There have been reports of crows attacking passers-by in housing estates. It is also a common sight to see crows chasing after the local refuse trucks and scavenging scraps of anything edible from the truck. When the crow population spiralled out of control, the local gun clubs were recruited to cull the large birds. The population of these unwelcomed birds reached a peak of 120,000 individuals in 2001 before regular culling dropped their numbers to a more manageable 10,000 in 2007. Although they are still quite evident in the local environment, their numbers appear to be under check.

Local superstitions put the crow as a bringer of bad luck. Their loud "caws" are also considered undesirable and whenever they appear in human habitations, they are rarely accepted as a welcome visitor. However, crows are known to be amongst the most intelligent of birds, being able to use their resourcefulness to get at their food. 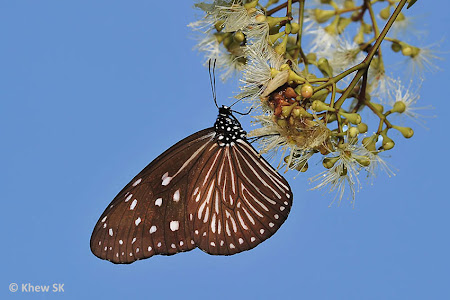 A female Striped Blue Crow feeds on the flowers of a Syzygium tree, shot against the blue sky 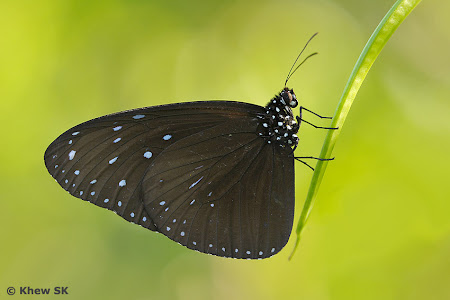 A male Striped Blue Crow perches on a leaf

Amongst these species, the Striped Blue Crow is the commonest species. It is found in urban areas as well as in the nature reserves. The species is named after the female, which features a striped hindwing. The upperside of the males is a deep iridescent blue that is attractive when it flies slowly past an observer. 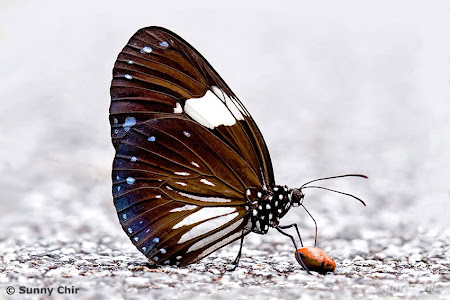 A Magpie Crow feeding on a fallen fruit 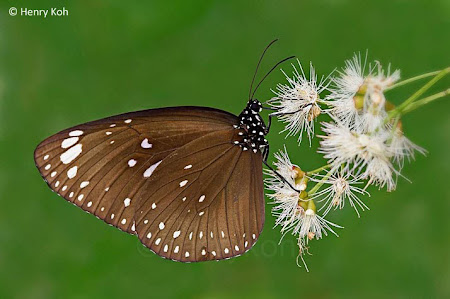 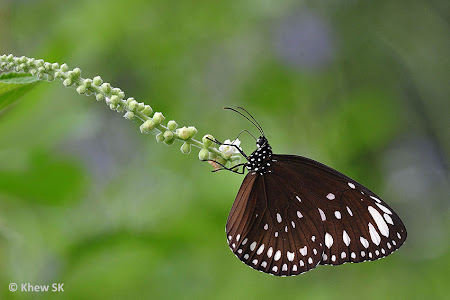 The King Crow is the largest member of the genus, and is a moderately rare species. It can be quite local, and is regularly seen in back-mangrove areas where its caterpillar host plant, the Pong-Pong tree (Cerbera odollam) grows. It can be seen in urban parks and gardens, as well as in well-vegetated areas in the vicinity of its host plant 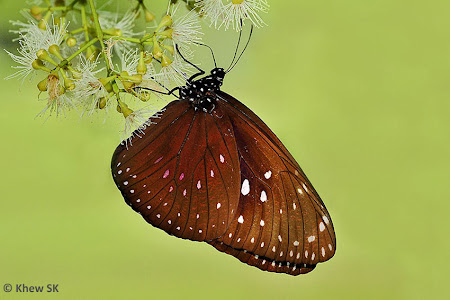 A King Crow feeding on the flowers of a Syzygium tree

The Striped Black Crow is rare, but occasionally appears at urban parks when flowering trees are in full bloom. The hindwing features a series of white submarginal streaks. It has been observed puddling on concrete floors and structures in the vicinity of the nature reserves in Singapore. 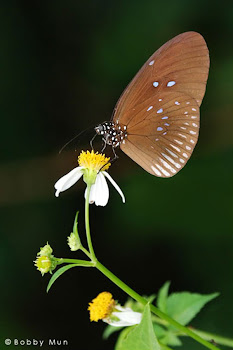 A Striped Black Crow feeding on a Bidens sp flower

The Dwarf Crow was first discovered on the offshore island of Pulau Ubin in Singapore, and was regularly observed, sometimes in numbers in the mid-2000's. However, in recent years, it has almost completely disappeared from Pulau Ubin, and has not been reliably spotted for several years after 2010. 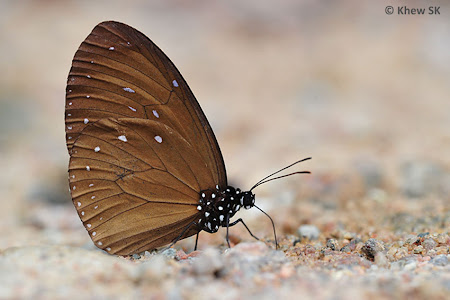 The Malayan Crow is the rarest of the species in the genus in Singapore. This fairly large black butterfly with white marginal and submarginal white spots, has only been seen on a few occasions in Singapore. Thus far, the observations of this species has been in the forested areas of the nature reserves. Although its known host plant is available in Singapore, it is curious as to why the species is not found more often, and whether the earlier observations of the individuals were of non-resident migrants or not. 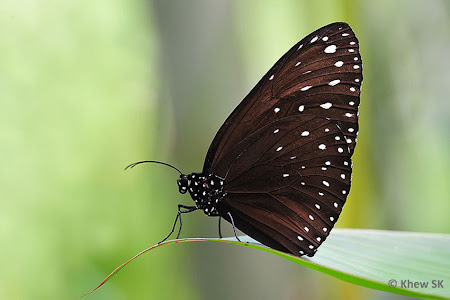 If one innocuously googles the word "tits" with well-meaning intention, looking for pictures of birds or butterflies, the result may not be as expected. Doing so usually brings forth pictures of well-endowed women and in particular featuring a part of the female anatomy that men tend to admire. Coming back to our avian variety of "tits", we find birds belonging to the Paridae, a large family of small passerine birds which occur in the northern hemisphere and Africa.

A screen capture of images after googling "Tits Birds"

These birds are mainly small stocky woodland species with short stout bills. Some have crests. They range in length from 10 to 22 centimetres. They are adaptable birds, with a mixed diet including seeds and insects. They are found in urban areas and around human habitation. 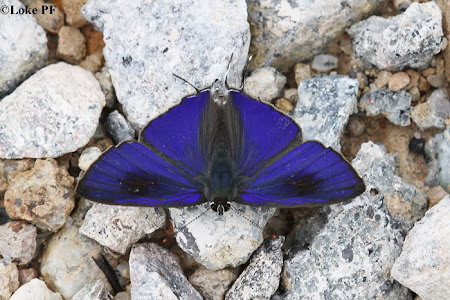 In the world of butterflies, the Tits are small tailed butterflies from the Lycaenidae family. In Singapore, there are three extant species - The Fluffy Tit (Zeltus amasa maximinianus), the Dark Tit (Hypolycaena thecloides thecloides) and the Common Tit (Hypolycaena erylus teatus). It is not apparent why these butterflies are called "Tits" as they generally bear very little resemblance of any sort to their avian friends. 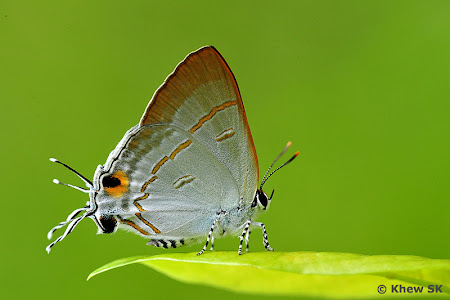 A female Common Tit perches on a leaf

Of the three species, the Common Tit is the most often seen in urban parks and gardens. The caterpillars of this species are polyphagous, with at least five different host plants. The caterpillars display a symbiotic relationship with the weaver ant. The male Common Tit features an attractive deep ultramarine blue on the upperside of its wings. The hindwing features a pair of tails and a large orange-crowned black tornal spot and another black spot at the lobe. 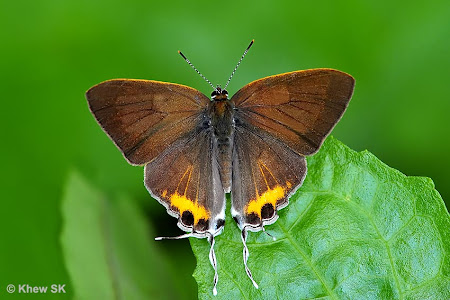 A Dark Tit shows off its uppersides whilst sunbathing

The Dark Tit, usually found on the landward side of mangrove areas, is much rarer. Unlike its commoner cousin, its caterpillars feed on a monocotyledon Flagellaria indica. The upperside of the Dark Tit is predominantly dark brown, except for the orange tornal area of the hindwing. Both the Common and Dark Tits are fast-flying butterflies, but often perch on the tops of leaves. During certain times of the day, both species have been observed to sunbathe with their wings opened flat. 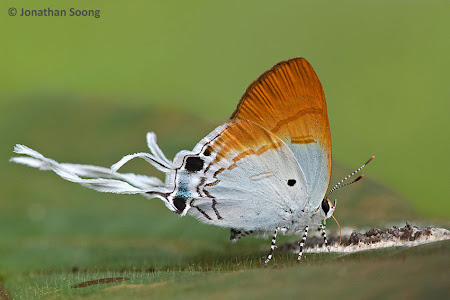 The last species of the three to bear the name "Tit", is the Fluffy Tit. Belonging to a completely different genus, the Fluffy Tit is a pretty long-tailed Lycaenid. There are two pairs of white tails with the pair at vein 1b rather long, about twice as long as the pair at vein 2. The species is skittish, and flies rapidly, with its long white tails prominently trailing behind. Males are often observed to puddle on bird droppings and sandy banks of forest streams.

And so we have two more groups of butterflies that share the same English common name as birds.

Posted by Commander at 9:46 PM

I enjoyed reading the article. Very informative. Are there any birds named after butterflies?