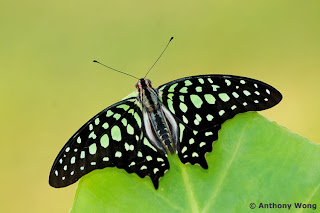 This month's Butterfly of the Month, the Tailed Jay, has the honour of bearing the name of the mythical Greek King, Agamemnon as its Latin name.  In Greek mythology, Agamemnon was the king of Troy. When Helen, the wife of Menelaus, was abducted by Paris of Troy, Agamemnon commanded the united Greek armed forces in the ensuing Trojan War, and created the famous legend of the Trojan Horse. It would be interesting to know how this attractive butterfly came to be named after a mythical Greek king. 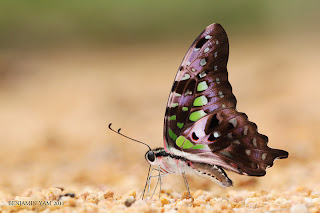 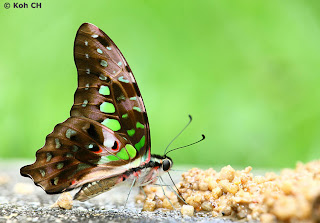 No one was prepared for the cruel twist of fate on that day when two explosions, planted by obviously mentally disturbed men, went off near the finishing line of the run, costing three innocent lives and injuring 183 others. Several of the victims had their legs blown off by the explosion. Indeed, we live in violent times, where terrorism, whether religiously-motivated or domestic, wreaks havoc on our lives. 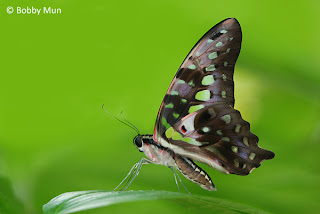 Nearer close to home, election fever has gripped our closest neighbours up north, where Malaysia braces itself for its 13th General Elections on 5 May 2013.  As Malaysians of all races and walks of life look forward in anticipation towards the results of the elections, social media is abuzz with talk of impending "change" in the Malaysian government. Will that happen on 5 May? Stay tuned to the results of who will be returned to power.  Being Singapore's nearest neighbour, the political climate in Malaysia will certainly have an impact on our city state, whether we like it or not.  Hence the importance of the elections results to Singapore. 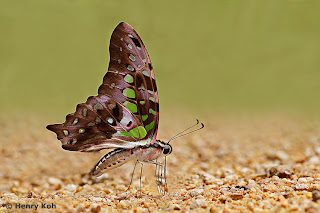 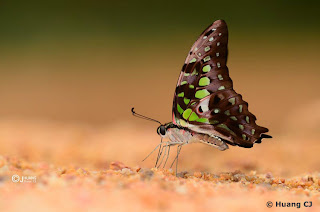 Over here in Singapore, the potential dengue fever epidemic can still happen, as more and more cases have been detected.  As of yesterday, there were more cases reported and the numbers appear to be climbing. As many of us would know, dengue fever is an illness caused by infection with a virus transmitted via the bite of the Aedes mosquito. There are four types of this virus (serotypes 1 to 4) which can infect you. The Aedes mosquito is an "urban" dweller that is more often found in our residential estates than in the forests.  Whenever a dengue fever outbreak is reported, the amount of pesticides that are sprayed into the environment rises significantly.  Whilst protecting human lives is paramount, the onset of a dengue fever outbreak also spells doom for our beloved butterflies in the urban environment as these pesticide fogging can only target all insects and unfortunately destroy them without any exception. 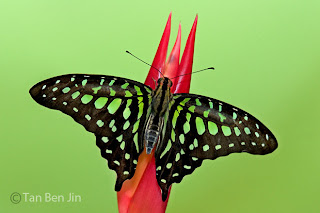 Back to our Butterfly of the Month, the Tailed Jay. This "swallowtail" butterfly is an erratic swift flyer that is widespread in distribution across the island of Singapore. Due to its caterpillars' ability to feed on the cultivated fruits Custard Apple and Soursop, and also the roadside trees, Magnolia champaca (White Chempaka) and Polyalthia longifolia (False Ashoka Tree), the butterfly can be found in urban gardens as well as in the forested nature reserves. 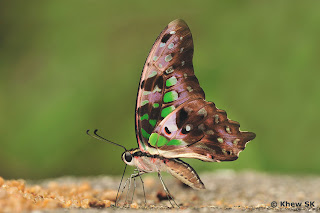 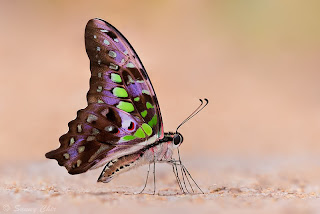 The upperside of the Tailed Jay comprises emerald green spots on a black background. The hindwing has a short tail, which is longer in the female.  On the underside, the purple-brown background has the same green spotting and additional dark purple patches and red spots. 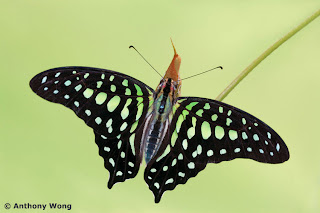 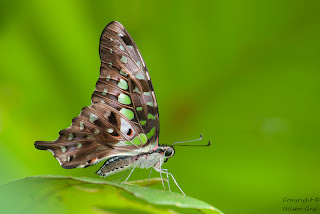 With a wingspan of up to 75mm from wingtip to wingtip, it is the largest representative of its genus in Singapore.  It is often observed in urban gardens, feeding on its favourite nectaring plants, Lantana and Ixora blooms. In the forests and nature reserves, it regularly appears at the blooms of flowering Jambu trees (Syzygium spp) where it flies at high speeds, stopping only for a fleeting moment to unfurl its proboscis to feed on nectar - all whilst its wings are flapping rapidly. 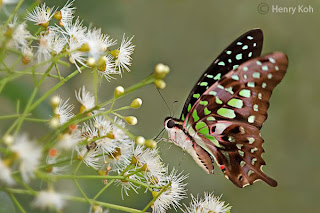 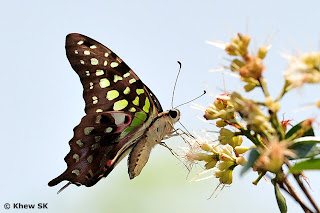 Males are also often observed to puddle in the company of other Graphiums, Papilios and many species of Pieridae.  Even when puddling, the Tailed Jay is skittish and alert, flying off quickly the moment it senses any danger approaching.  It prefers to puddling on damp sand along streambanks that have been tainted with decomposing organic matter. 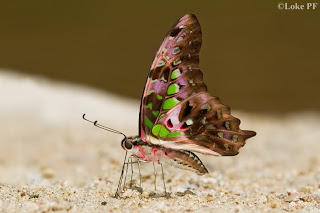 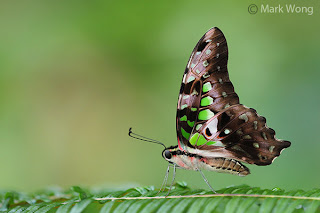 Females do not puddle, but are more often encountered at flowers and also in the vicinity of its various caterpillar host plants where they are in the process of ovipositing. In some cases, the butterfly is observed to stop on the upperside of a leaf to sunbathe at certain times of the day, whilst at other times it will stop with its wings folded shut as if to take a rest from its high-energy flight activity. 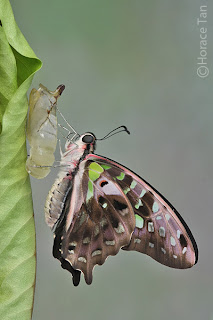 The complete life history has been recorded by ButterflyCircle on this blog and found here.