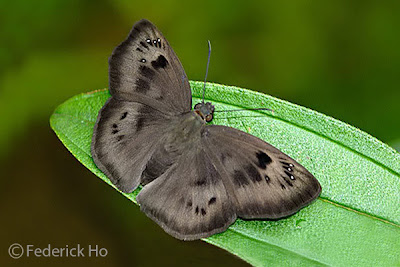 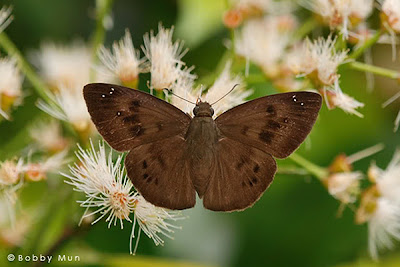 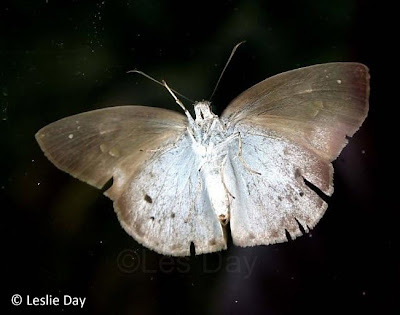 Above, the wings are dark brown. On the forewing, there is a white hyaline spot in each of spaces 3,6,7,8 in both sexes, and additional spots in the female in spaces 4 and 5. These spots are larger and more distinct in the female than in the male. Darker brown discal/post-discal patches are found in spaces 1b to 8 and in the cell in the forewing. Similar but smaller post-discal patches are also found in spaces 1b to 6 in the hindwing. Underneath, the wings are pale buff brown and are similarly marked as per above. The underside of the hindwing is suffused with white scaling. 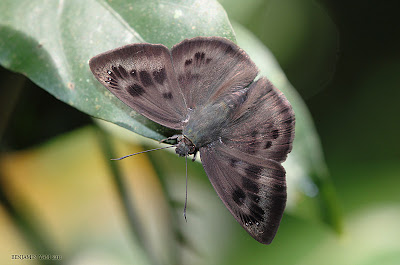 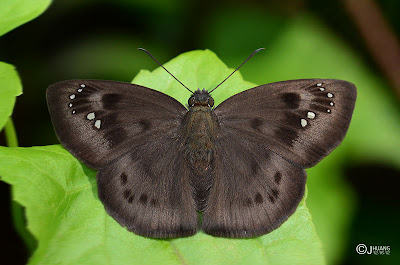 Field Observations of Butterfly Behaviour:
This species is the most commonly found species of its genus in Singapore. They are typically found in forested areas of the nature reserves and other hill parks and wastelands. As is the case for the other Tagiades species, the adults have the habit of perching on the underside of a leaf between flights, and with its wings opened flat. The adults have the habit of visiting flowers and puddling on bird droppings. 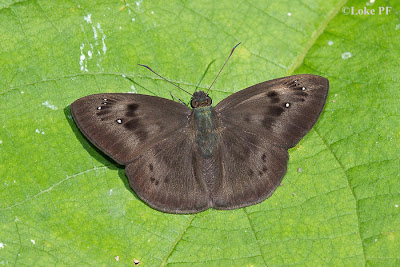 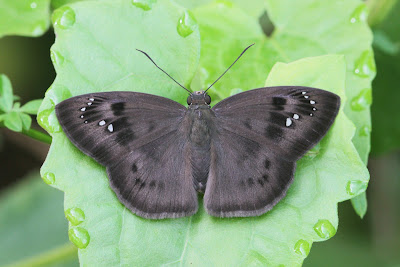 Early Stages:
Several Dioscorea species have been found to be utilized by the early stages of the Common Snow Flat in Singapore, among them, the species Dioscorea pyrifolia has also been found to play host to the caterpillars of the Malayan Snow Flat and the Large Snow Flat. The caterpillars of the Common Snow Flat feed on leaves of the host plant. When not feeding, the caterpillar stays out of harm's way by confining itself to a leaf shelter formed by cutting and folding a leaf fragment along the edge of the leaf. 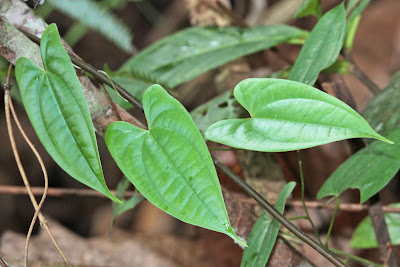 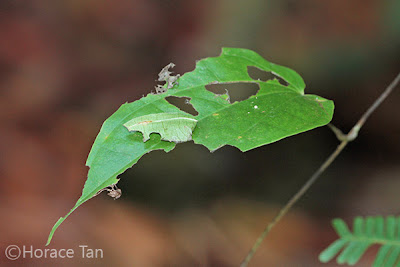 A leaf shelter of a Common Snow Flat caterpillar found in the field.

The eggs of the Common Snow Flat are laid singly on the surface, typically on the upperside, of a leaf of the host plant. The orangy brown egg is hemispherical with its surface marked with longitudinal ridges running from the pole to the rim of the base. Each egg is well concealed in a mass of pale brown setae deposited by the mother butterfly.  The diameter (of its circular base) is about 1mm. 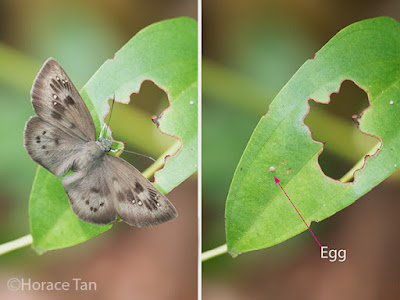 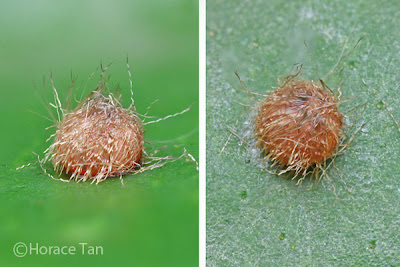 Two views of an egg of the Common Snow Flat. 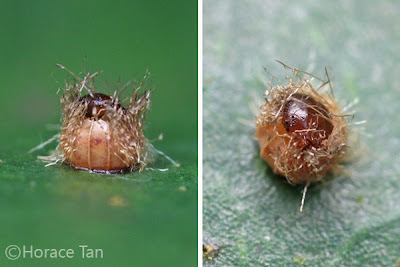 Two views of a mature egg of the Common Snow Flat, with the head of the caterpillar partially emerged. 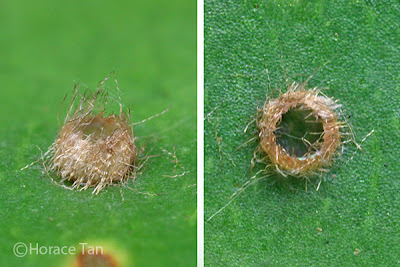 Two views of an empty egg shell of the Common Snow Flat.

The egg takes about 5 days to hatch. The young caterpillar emerges by eating away the polar part of the egg shell. The rest of the egg shell is not eaten by the newly hatched which is about 2.5mm in length. The pale yellowish body is roughly cylindrical in shape, and has a broad reddish lateral band running the entire body length. The head capsule is black and there is a dark brown to black collar mark on the dorsum of the prothorax. As the caterpillar grows, the body assumes a strong green to dark green undertone. After reaching about 5mm in about 3 days, the caterpillar moults to the 2nd instar. 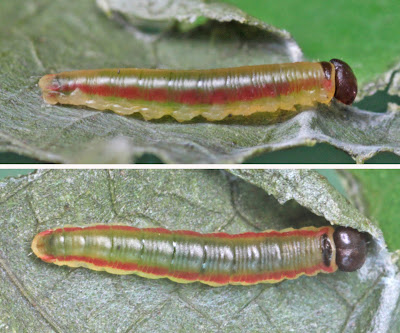 The body of the 2nd instar caterpillar is yellowish brown with a green undertone. The head is dark reddish brown and bi-lobed. The dark collar mark on the prothorax is now less prominent. The lateral red bands are now less distinct and are pale red to pink in coloration. This instar lasts about 3 days with the body length reaching about 7.5-8mm. 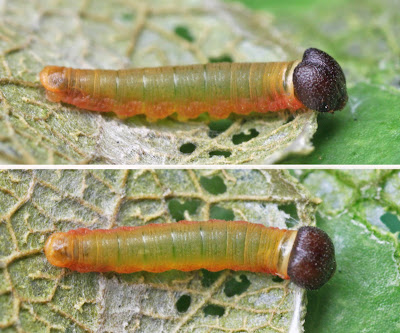 Two views of a 2nd instar caterpillar, early in this stage, length: 4mm. 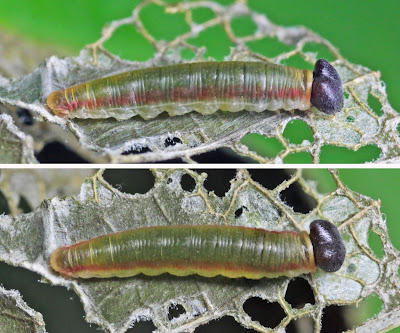 The 3rd instar caterpillar is pale yellowish/whitish with a green undertone. There is only a faint trace of collar mark on the prothorax, and the lateral red bands are now barely discernible. The head capsule is still black but broader sideways. There are numerous tiny, yellowish/whitish, speckles on the body surface . This instar takes about 3 days to complete with body length reaching about 12-13mm. 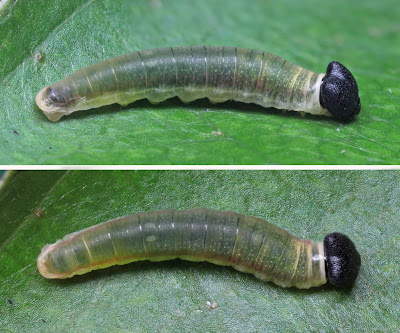 The 4th instar caterpillar is little changed from the 3rd instar caterpillar, with the reddish lateral bands vanished entirely. This penultimate instar lasts about 4-5 days with body length reaching about 20mm. 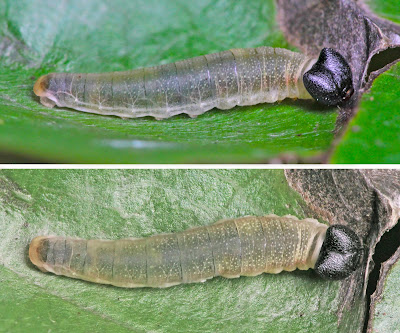 The 5th instar caterpillar has similar body markings as in the 4th instar but the head capsule has taken a stronger reddish brown tone. The numerous yellow speckles dotting the body surface are rather prominent on the increasing weighty caterpillar. This final instar lasts for about 10 days, and the body length reaches up to 30mm. 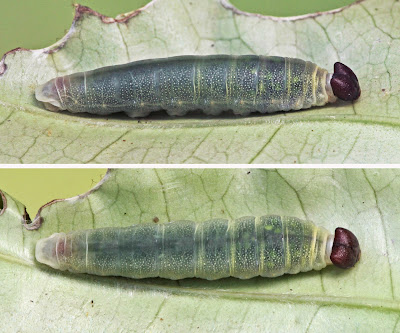 Two views of a 5th instar caterpillar, in this stage, length: 28mm. 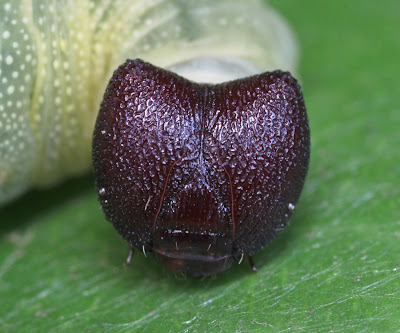 A close-up view of the head capsule of a 5th instar caterpillar.


On the last day of 5th instar, the body decolorises to a light shade of tea green. The caterpillar ceases feeding and stations within its leaf shelter. The pre-pupatory larva prepares for the pupal phase with a series of silk construction work with the main pieces being a silk girdle across the dorsum of its early abdominal segments, and a short and thickened transverse silk band on the substrate at  its posterior end. Both the dorsal point of the girdle and the transverse band are further secured by vertical/oblique threads to the inner wall of the shelter. Soon the pre-pupatory larva becomes dormant in its leaf shelter. Pupation takes place about 1 day later. 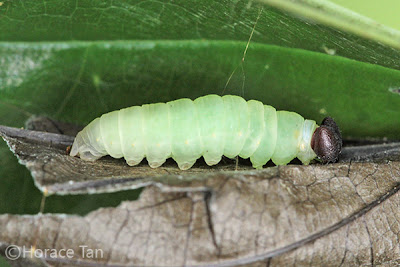 A pre-pupa of the Common Snow Flat in its pupation shelter.


The girdled pupa is secured with its cremaster attached to the short transverse band on the substrate. It has a short thorax, a rather long abdomen, a pointed rostrum and two small ear-like appendages at the leading edge of the mesothorax. The body is pale beige brown with two large triangular white patches in the wing cases, and smaller white lateral patches on the side of the abdominal segments. Length of pupae: 20-22mm. 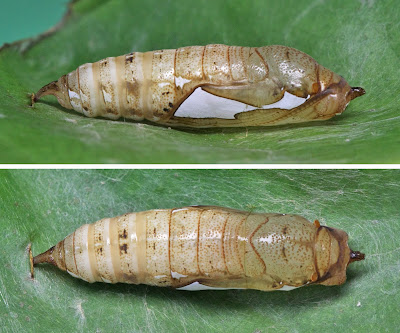 Two views of a pupa of the Common Snow Flat. 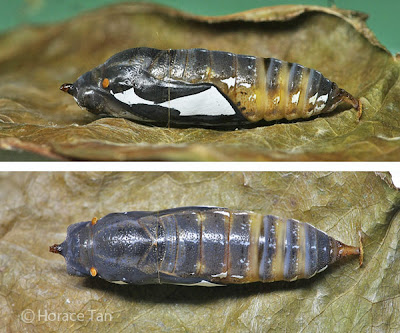 Two views of a mature pupa of the Common Snow Flat. 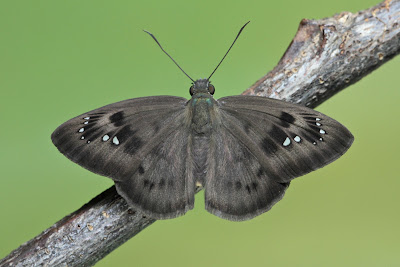