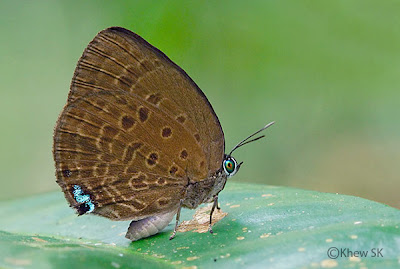 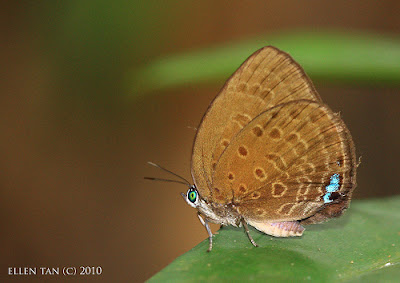 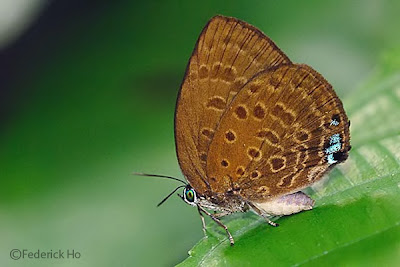 Above, the male is bluish purple with a dark border on the forewing extending from 2mm (width) at the tornus to 3mm at the apex ; the female is pale purple with broader dark borders than the male. Underneath, for both sexes, the post-discal band on the forewing is  dislocated at vein 4, and the post-discal spots in spaces 5, 6 ,7 on the hindwing overlapping and their centres aligned. The spot in space 3 on the forewing is usually an oblique oval. There are tornal green scales in the tailless hindwings which are slightly toothed at the end of vein 2. 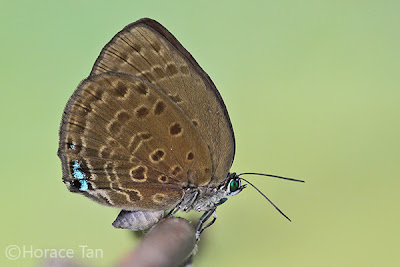 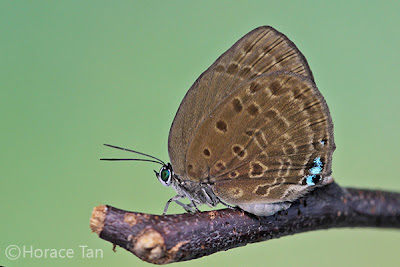 This species is common in Singapore. Sightings of the adults largely occur in the Central Catchment Area and Bukit Timah Nature Reserve where its host plant, Macaraga gigantea is present in relative abundance. Essentialy a forest denizen, the adults are typically observed in shady areas near its host plant. Its underside markings are almost indistinguishable from its close cousin, Arhopala amphimuta amphimuta. 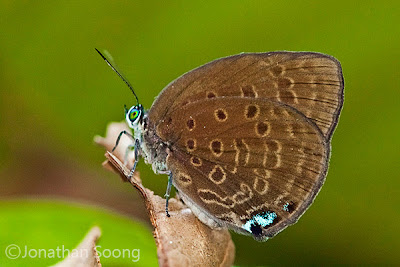 A sequence of two shots showing an adult Arhopala major going through an open-and-close-wing routine on a leaf.

The host plant Macaranga gigantea is a large-leaved tree which is fairly common in the nature reserves. Leaves are 3-lobed with leaf base broadly rounded. The immature stages of Arhopala major feed on its leaves and has a symbiotic relationship with the inhabitant ants. When not feeding, the caterpillars in all instars have the habit of resting on the leaf underside, typically next to the main ribs at the leaf base. It is not uncommon to find multiple caterpillars in various instars living on the same leaf. 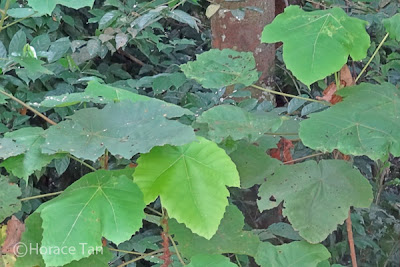 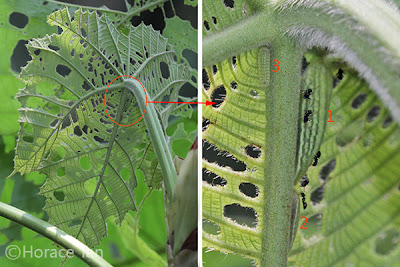 Left: field shot of an ``infested'' leaf of the host plant. Right: close up view of the main ribs at leaf base, showing the presence of three caterpillars (numbered) and attending ants.


The egg is laid singly on the underside of a young leaf or the surface of the petiole of the host plant. Given the large size of the leaf and long length of the ``thick'' petiole, it is not uncommon to find multiple eggs laid on the same leaf. Each bun-shaped egg is about 0.75-0.8mm in diameter. Its colour is pale greenish initially but becoming whitish as it matures. Its recticulated surface features moderately long spikes at the intersections of crisscrossing ridges. 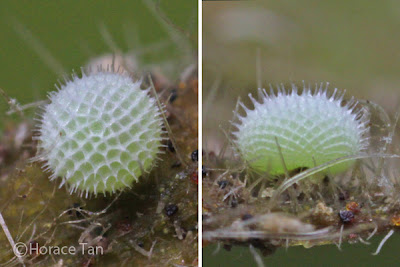 Two views of an egg of Arhopala major. 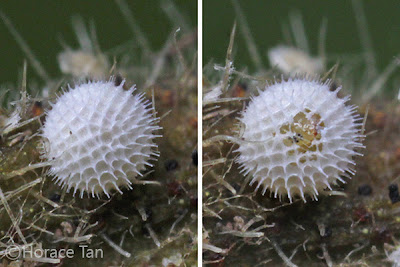 Left: A mature egg; Right: Same egg but with part of the chorion nibbled away.


It takes 3-4 days for the egg to hatch. The newly hatched has a length of about 1.2-1.4mm and has a pale yellowish brown body featuring long peripheral setae and moderately long dorso-lateral and lateral setae. It has a rather flattened woodlouse appearance with a large semicircular prothoracic segment. The large prothoracic shield is coloured as per the body base color. This appearance remains as the caterpillar grows through the instars. As it grows, the body color becomes yellowish green. 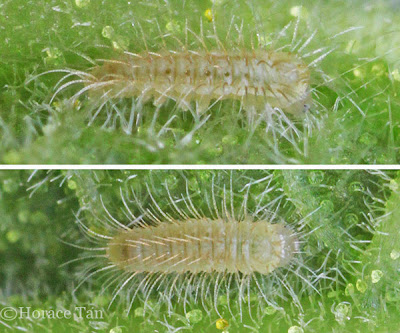 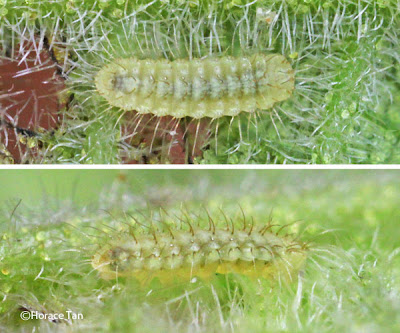 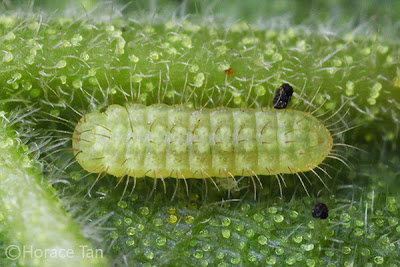 A late 1st instar caterpillar, dormant prior to its moult, length: 2.8mm.


After about 3 days of growth, and reaching a length of about 2.8mm, the caterpillar moults to the next instar. The 2nd instar caterpillar is yellowish green to green in body colour, and has whitish patches which larger and more quadrate for those occurring dorsally, smaller and irregular-shaped for those occurring laterally. There are numerous short pale yellowish brown setae on the body surface, and moderately long whitish setae lining the body rim. The dorsal nectary organ (DNO) and the tentacular organs (TOs) are present now, but they are still too small to be easily distinguisable. The 2nd instar caterpillar reaches a length of about 5mm, and after about 4 days in this stage, it moults again. 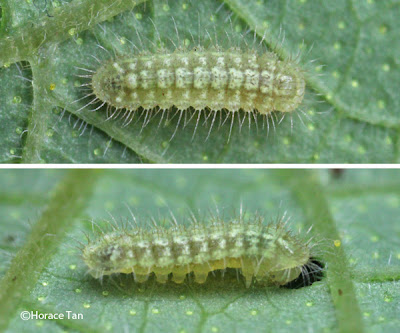 Two views of a 2nd instar caterpillar, early in this stage, length: 3.3mm 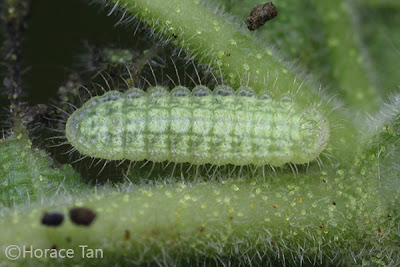 A 2nd instar caterpillar, dormant prior to its moult, length: 4.5mm. 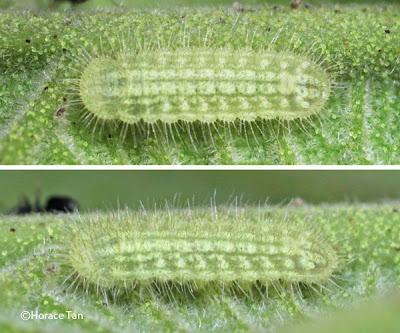 Two views of a 3rd instar caterpillar, early in this stage, length: 5mm. 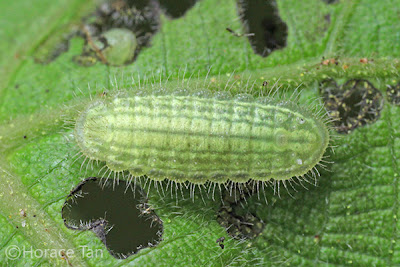 A late 3rd instar caterpillar, dormant prior to its moult, length: 8mm.


The 4th instar caterpillar has similar appearance as in the 3rd instar. The banded appearance is more striking than in the 3rd instar. On each side of the body, there are four intermittent bands with the largest and broadest one occurring dorsally. In addition, a continuous and narrow pale yellowish band lines the peripheral rim of the body. The 4th instar takes about 4 days to complete with the body length reaching up to about 13mm. 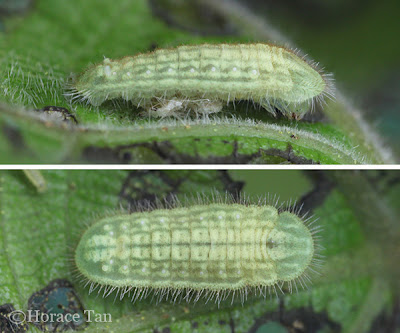 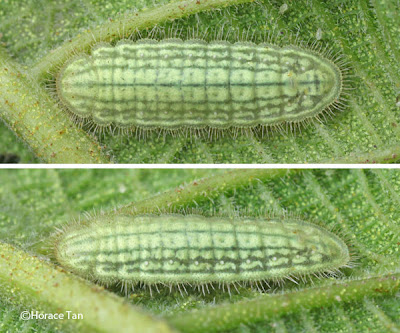 
The 5th instar caterpillar has similar body markings and body colour as in the early two instars. In this final instar, the pale yellowish bands on the body take on a more ``solid'' appearance with fewer breaks and gaps along their lengths. 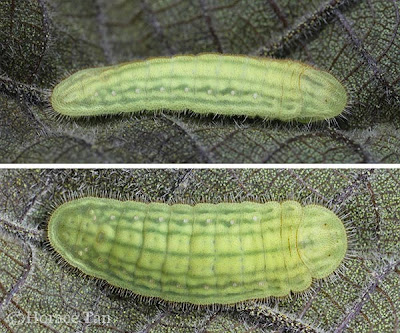 Two views of a 5th instar caterpillar, early in this stage, length: 13.5mm. 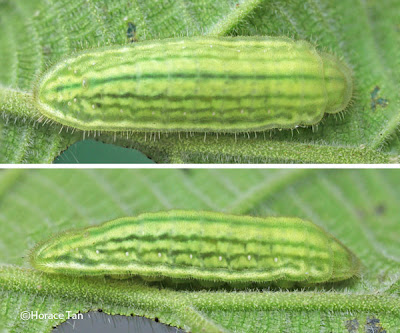 Two views of a 5th instar caterpillar, late in this stage, length: 18mm.


After about 5 days of feeding and reaching up to a length of 18-19mm, the caterpillar stops food intake for about 1 day. During this time, its body length gradually shortened, and the banded appearance disappearing as the body colour fades to a uniform pale yellowish green. The caterpillar wanders away from the resident leaf in search of a a pupation site. In the home breeding setting, the caterpillar chooses the gaps or space between leaves in a leaf litter to pupate.

A late 5th instar caterpillar which has ceased its feeding activity and in the midst of seeking out its pupation site. 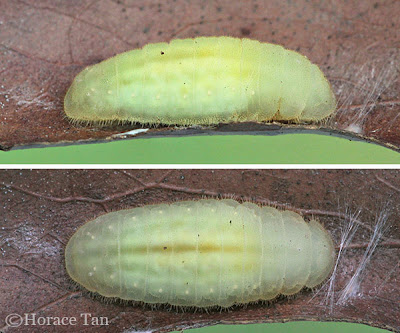 Two views of a pre-pupa. 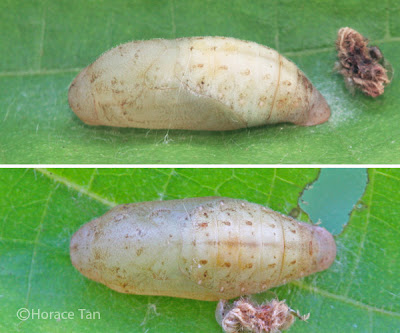 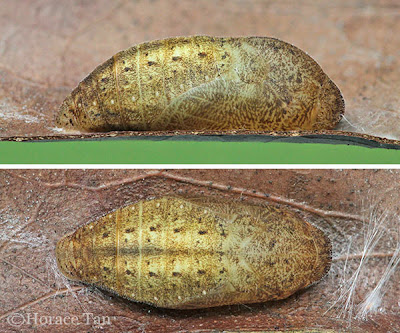 
Seven days later, the colour of the pupa darkens in the thorax and wing cases, signalling that the pupal stage is coming to an end. Bluish patches can be seen through the pupal skin in the wing cases giving us a hint of its gender. The next day, the adult butterfly emerges. 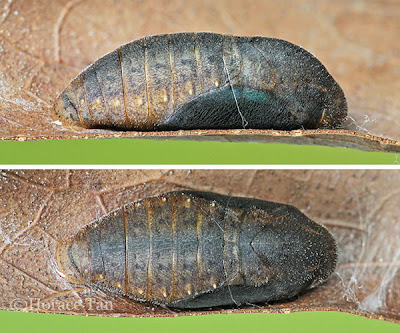 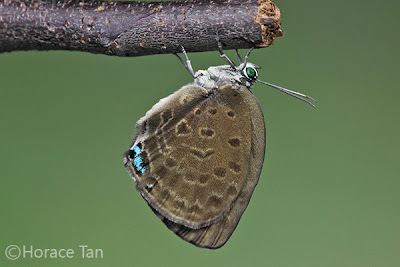