Butterfly of the Month - January 2013 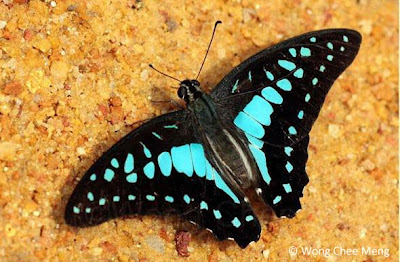 The month of January 2013 seems to have whizzed by again. It felt that it was only yesterday that Singaporeans were celebrating the countdown at Marina Bay to welcome the new year, and some of us were making our New Year resolutions! Well, more than three weeks have passed, as the year 2013 kicks into gear. The wet weather appears to be hanging on longer than usual, as the past few weeks have been an abnormally rainy. But it looks like the weather will be changing soon, and it will be butterfly season again! 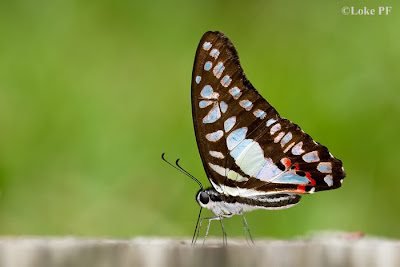 The initial weeks of January have been rather quiet on our little red dot, except perhaps with the excitement of a by-election in the Punggol East single-member constituency. Election fever has gripped us again, although essentially, only 31,649 registered Singaporean voters are eligible to decide on who their Member of Parliament should be, come 26 Jan 2013. The ruling party's candidate will be pitted against three opposition candidates for a showdown that many predict to be a watershed by-election for Singapore. Will the PAP retain its parliamentary seat? Or will the Opposition wrest it away? Stay tuned to your favourite news channels on Saturday night! 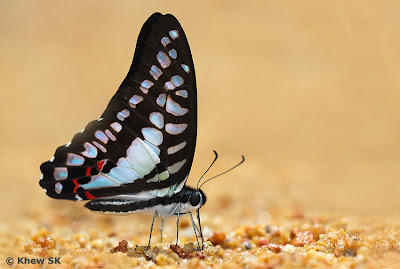 Over a quick two-day trip up north to Kuala Lumpur in Malaysia over the early part of the week to attend a conference, I observed that in many ways, the plight of rising costs, labour shortage and the competition for talent is very similar to our building industry in Singapore. The Malaysian economy appears to be chugging along quite fine, and some say that it has an even stronger endurance than that of Singapore. 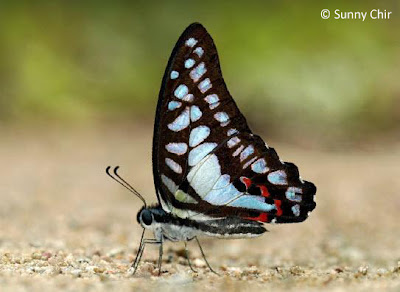 I also met up with some newfound friends amongst the Facebook gardening community and had a pleasant taste of Malaysian hospitality. The Internet is a great platform for bringing together like-minded people from different walks of life, across borders and irrespective of race or religion. The camaraderie enjoyed online is often carried into the real world as friends meet to discuss common interests and share experiences. 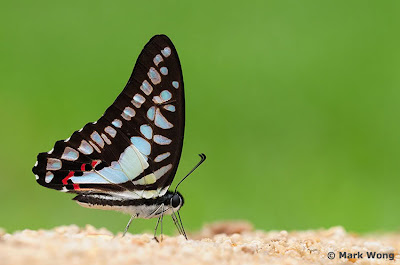 This month we feature a speedy butterfly, the Blue Jay (Graphium evemon eventus).  With a powerful and erratic flight, this butterfly is challenging to photograph, as it zips past observers at breakneck speed in the forested nature reserves of Singapore. However, when it stops to puddle at sandy streambanks, the odds of getting a closeup shot of the Blue Jay would be much better. 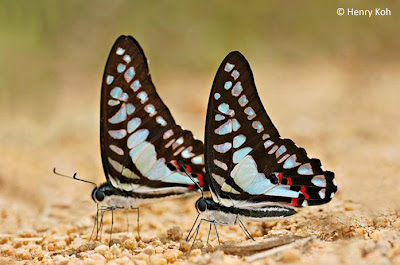 The Blue Jay is a forest-dependent butterfly, and is predominantly found in the nature reserves. It is seldom seen in urban parks and gardens. It is difficult to identify with certainty when in flight, and is often confused with the Common Bluebottle (Graphium sarpedon luctatius) and the Common Jay (Graphium doson evemonides), two other species of the same genus found in Singapore. Over in Malaysia, there are at least four more lookalike species that would add further to the confusion when trying to identify these butterflies in the field! 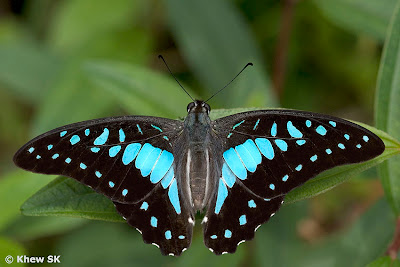 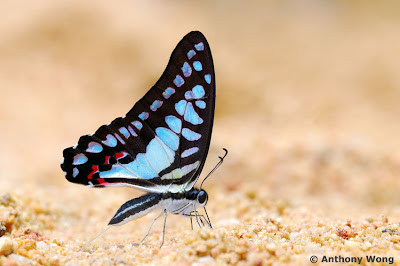 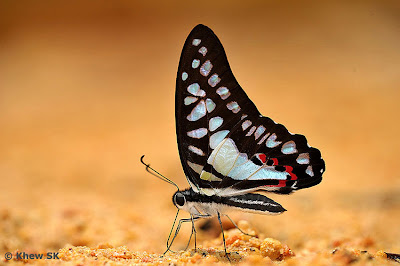 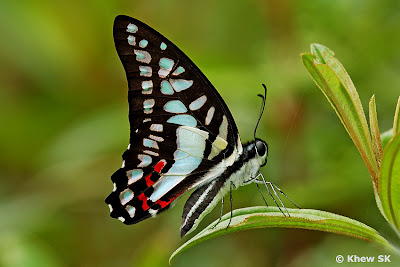 
Caterpillars of the Blue Jay are believed to feed on a type of Cinnamon that can be found quite commonly in the forested areas of Singapore. The head of the pupa features a horned process. The males of the species are often observed puddling at sandy streambanks in the company of other Papiliondae like the Common Bluebottle and the FiveBar Swordtail. It can be considered common and can almost be found throughout the year. 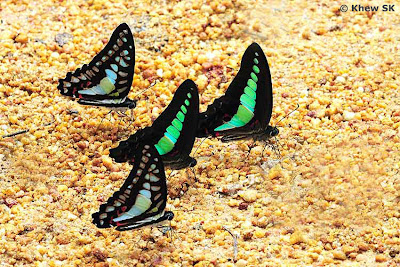 Two pairs of Blue Jays and Common Bluebottle puddling together


During puddling, it can be observed that the butterfly often ejects a stream of fluids out of its abdomen. This is probably due to the large amounts of water intake as it sucks up nutrients via its proboscis. Often, after a long period of puddling and having satiated itself, an individual flies to a nearby bush, and perches to rest with its wings opened fully to display its nice blue uppersides that contrast beautifully with the black borders. 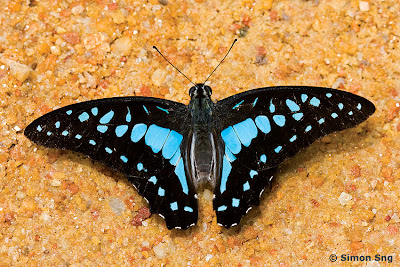 Very educational information... and excellent pictures! Shall be returning for more...

Arigato, Lrong! Do come back soon! :)

This is such a lovely butterfly and I've never seen it before. I like how the red patches on the lower surface of the hind wings give it an added allure. The photography is indeed excellent.