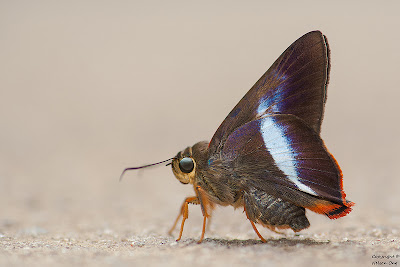 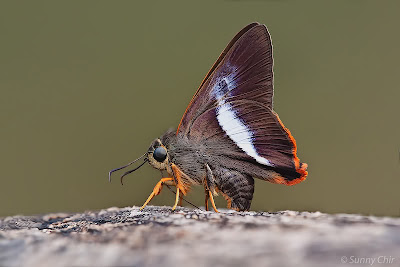 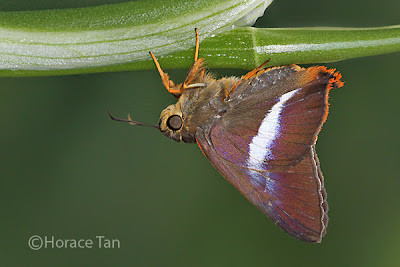 Above, both sexes are dark brown and without any markings. Underneath, both sexes are dark brown with a prominent white discal band in the hindwing, from space 1b to the costa. A large white discal patch sits in the lower half of the forewing. The upper end of this white patch is diffused into a shinning purplish blue smudge. The hindwing, produced at its tornus, is adorned with bright orange cilia along the termen from the tornal area to vein 4. The legs are colored pale yellowish orange. 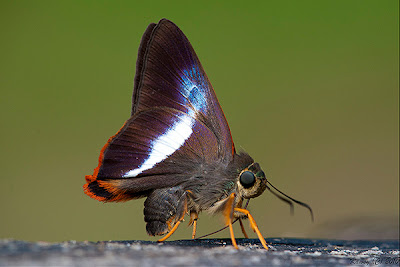 This species is moderately rare in Singapore. Due to its crepuscular habit, the adults are rarely sighted by butterfly watchers. Essentially a forest species, Orange Tailed Awl can be found in the nature reserves as well as the Singapore Botanic Gardens, where its known local host plant H. benghalensis can be found in relative abundance in one area. Similar to the Hasora spp., the adults of Orange Tailed Awl have a swift, strong and darting flight, and have a habit of perching on the underside of a leaf when resting. The males have also been found puddling on wet grounds. 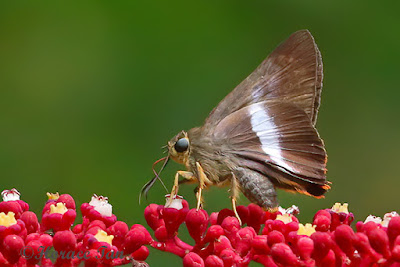 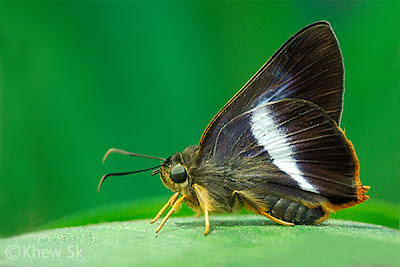 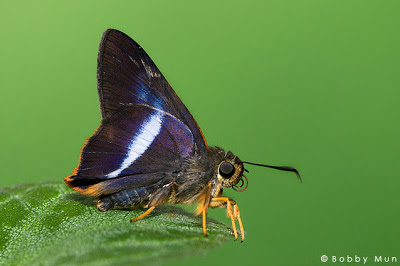 The caterpillars of the Orange Tailed Awl feed on leaves of its host plant and live in leaf shelters between feeds for concealment. In constructing its shelter, an early instar caterpillar typically makes a sinuous cut from the leaf edge, and proceeds to fold the leaf fragment onto the leaf upperside where silk threads are used to secure the leaf edge to the leaf surface. The shelters for the much larger caterpillars in late instars are correspondingly larger and sometimes made by simply joining two opposing edges of a leaf. 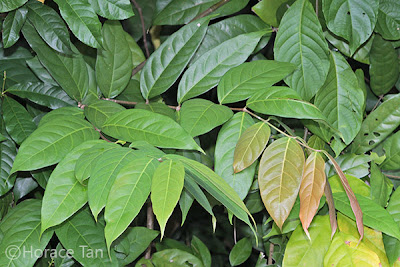 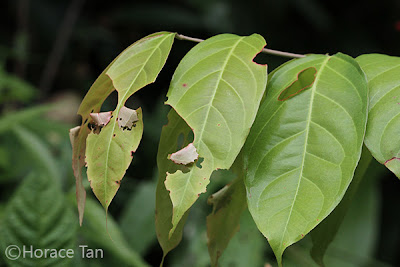 Leaves with leaf shelters for early instar caterpillars of the Orange Tailed Awl.


The eggs are laid singly on young shoots or the upperside of a leaf of the host plant. Each dome-shaped egg has a diameter of about 0.7-0.8mm. It is bright wine red when collected, 2 days prior to the hatching event. A number of vertical ridges run longitudinally from the top micropylar area to the rim of the circular base. As the egg mature, it turns whitish with an orange undertone. 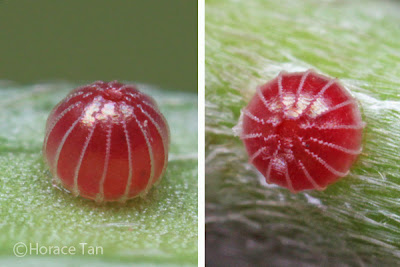 Two views of an egg of the Orange Tailed Awl. 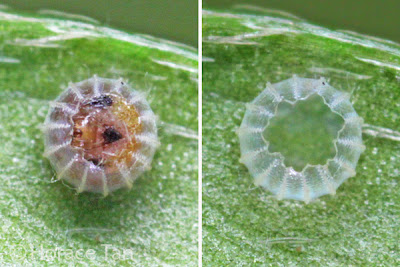 
The young caterpillar nibbles away the polar portion of the egg shell, just sufficient for its head to get through. The newly hatched has an initial length of about 1.8mm. Its whitish cylindrical body is adorned with four orangy red patches laterally. The body has rather long dorso-lateral and sub-spiracular white setae. The orange-colored head has a number of long setae and a black band straddling its frons and area around the ocelli. The first instar lasts for about 2 days with the body length reaches up to 4.5-5mm. 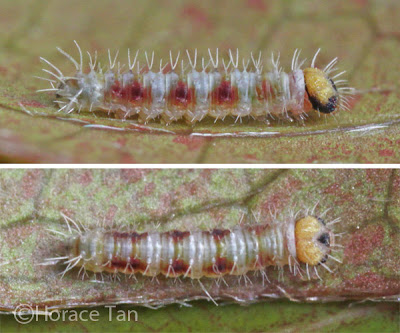 
The body of the 2nd instar caterpillar is whitish to pale yellowish with black transverse bands on the body segments, with those on 2nd, 3rd thoracic segments, and 2nd, 4th, 6th and 8th abdominal segments particularly broad and prominent. The body setae are now rather short and inconspicous. The head is pale orange, and in addition to the black patches seen in the 1st instar, it nows has a broad transverse black band across the upper portion. This instar lasts about 2 days with the body length reaching about 8-9mm. 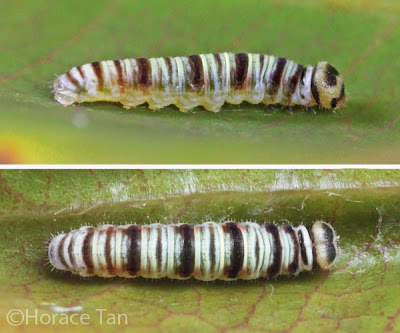 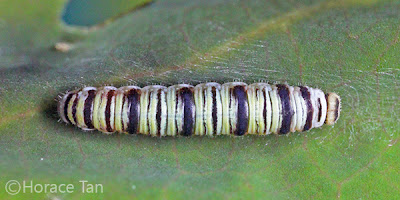 2nd instar caterpillar, dormant prior to its moult, length: 7mm. 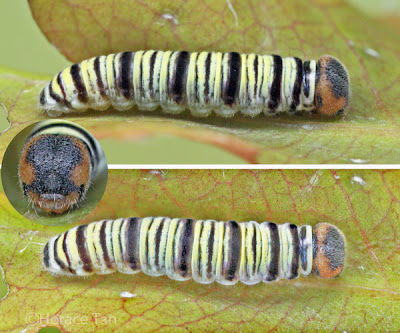 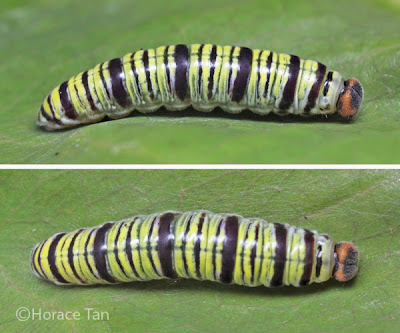 3rd instar caterpillar, dormant prior to its moult,  length: 13mm.


The 4th instar caterpillar resembles the 3rd instar caterpillar closely but has three additional black and narrow dorsal bands, gaining prominence as the growth progresses in this instar. The black markings in the head now has an upward branch from the middle of the upper transvers band. The dorsum of the 9th abdominal segment stands out as the typically yellowish base colour there takes on a orange tone. This instar lasts 2.5-3 days with the body length reaching up to 27-28mm. 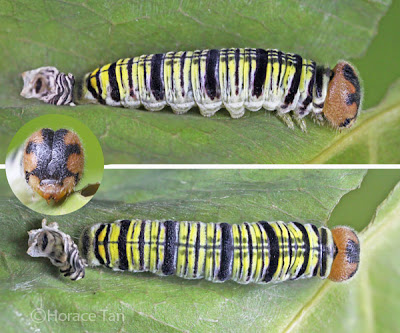 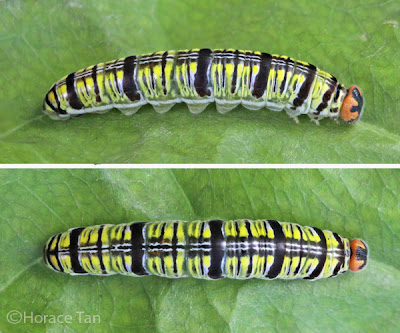 4th instar caterpillar, dormant prior to its moult, length: 27mm 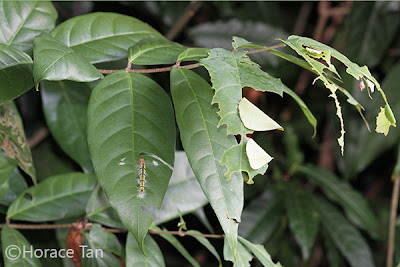 A 4th instar caterpillar sighted in the midst of cutting a leaf for its new leaf shelter.


The 5th instar caterpillar resembles the 4th instar caterpillar closely but has several black markings larger and broader. The two outer black dorsal bands and the 6 broader transverse bands (in 2nd, 3rd thoracic segments; 2nd, 4th, 6th and 8th abdominal segments) are broader and more prominent than those in the 4th instar. The black markings in the head has the side branches narrower and better defined, giving the caterpillar a fearsome appearance. This final instar takes about 5 days to complete with the body length reaching about 40mm. 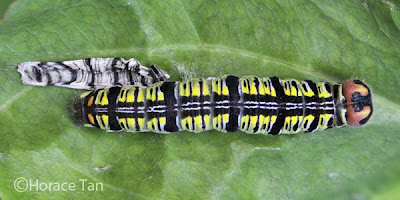 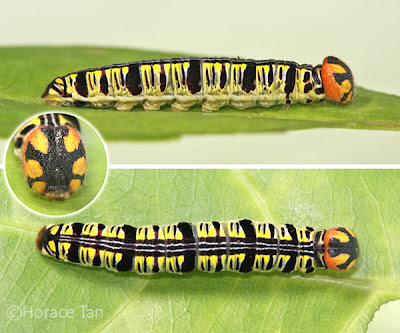 Two views of a 5th instar caterpillar, early in this stage, length: 28mm. 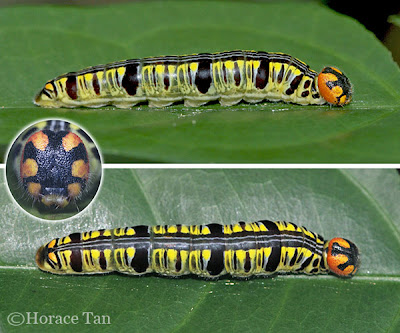 
Towards the end of 5th instar, the body of the caterpillar shortens gradually and its body decolorised to a pale whitish/yellowish coloration between the similarly faded black spots. The caterpillar then stations itself in its leaf shelter to prepare for the pre-pupal stage. Within the shelter, it carries out a series of silk construction work with the main pieces being a silk girdle across the dorsum of its anterior abdominal segments, and a short and thickened transverse silk band on the substrate near its posterior end. Once its anchors itself via its claspers to the silk pad near the transverse band, the pre-pupa becomes dormant for about 0.5 to 1 day before the onset of the pupation event. 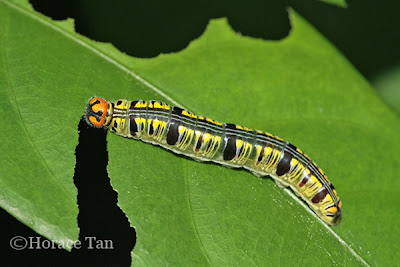 A final instar caterpillar of the Orange Tailed Awl found eating away on a leaf during a field observation. 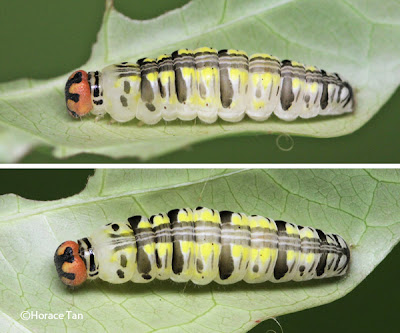 Two views of a pre-pupa of the Orange Tailed Awl.


Pupation takes place within the leaf shelter. The pupa is secured with the silk girdle and the cremastral attachment to the short transverse band on the substrate. It has a short thorax, a rather long abdomen, a short and pointed rostrum. The body is initially whitish with yellowish patches, but in a day or so, the base color becomes a uniform pale milky brown. The body becomes coated in a thin layer of whitish powdery substance. There are small dorso-lateral and lateral black spots on most body segments. Length of pupae: 21-23mm. Two views of a fresh pupa of the Orange Tailed Awl, 1-2 hours old. 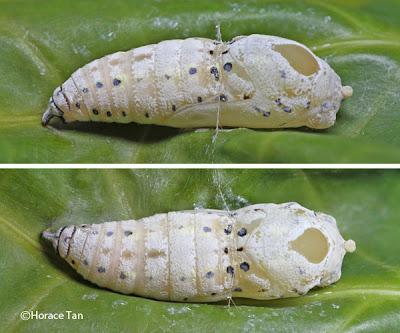 Two views of a pupa of the Orange Tailed Awl.


After 7-8 days, the pupa becomes mostly black in colour in the wing pads and all body segments, signaling the imminent end of the pupal phase. Eclosion typically takes place in the morning next day. 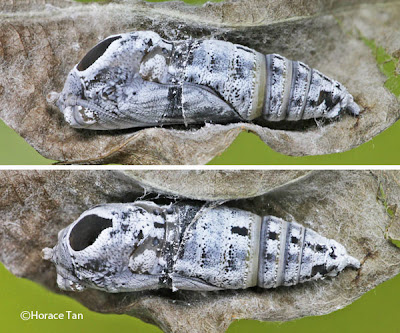 Two views of a mature pupa of the Orange Tailed Awl. 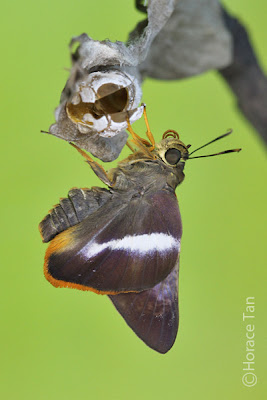 I came back to Singapore again after spending two years in Shanghai. I am happy to be back to this beautiful country though, I am unhappy to find so many plants and trees suffering from the extremely dry spell. Some trees lost all the leaves because of the extremely dry condition.... So sad...
I went back to my favorite point at the Botanical garden. My small joy there was always to take a look to some Orange tailed awls' little tiny caterpillars in the tidy rolled leaves. It was such a pleasure to find them. But this time, there is none. I couldn't find any of the shelter at all... I am afraid they disappeared from this location for some reasons. I am hoping they will be back after the rain and more suitable concision re-established again. Do you think this record breaking spell of extremely dry weather damaged lots of good environments for many butterflies in Singapore?

Welcome back, Atsu. :)
It is a bit worrying that the Orange Tailed Awl caterpillars seem to have vanished from that site. Hopefully it is only a temporary lull between broods.
As for the environment change, I believe butterflies which host plants (such as the Cow Grass) withered easily in dry spells would face a downward pressure on their population count.