The Atlas Moth Chronicles
Episode 2 : The Transformation is Complete 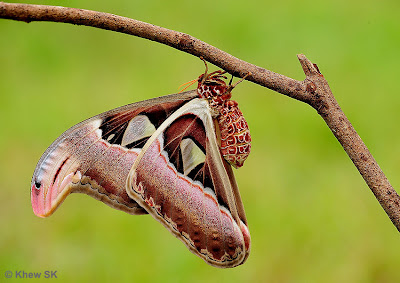 Dr Wee is back to share with us his meticulous up-close-and-personal documentation of the metamorphosis of the Atlas Moth from egg to adult.

The unexpected arrival of a pair of Atlas Moths (Attacus atlas) at my porch left me with about 250 eggs.  These eggs were transferred to the leaves of Limau Purut (Citrus hystrix) branches held in vases. 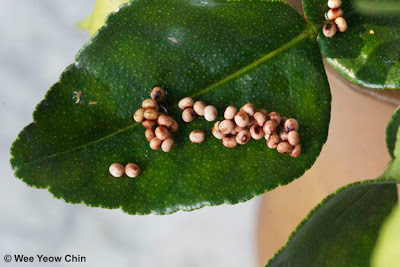 A batch of Atlas Moth eggs - usually pinkish in colour


The rearing of this batch of eggs was to be a learning process. Many failed to survive during the 60-70 days period before pupating. Only four caterpillars survived to turn into pupae and of these only two successfully eclosed. Fortunately the moths that emerged were both females. They attracted males and mated to produce a second generation of eggs. The mating pairs had to be caged as otherwise they would fly off with the females laying their eggs elsewhere. 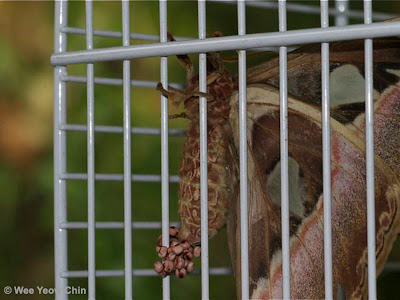 A caged female Atlas Moth lays her eggs after mating


These eggs, double the number of the first batch, made it necessary to use additional alternative host plants like Starfruit (Averrhoa carambola) and Blue Mahang (Macarange hyeni).  My Limau Purut tree would not be able to support this larger number. The caterpillars developed well with all the plants and allowed further observations on their development that were missed during observations on the first batch. These second generation eggs eventually gave a total of 18 pupae. 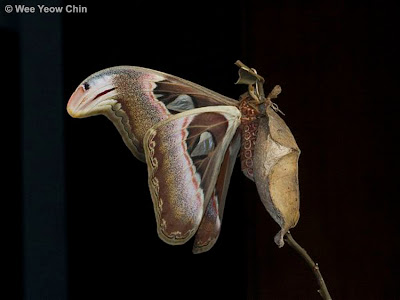 Maintaining and observing these caterpillars were a full time job. Their voracious appetite demanded daily, or sometimes twice daily, provisions of new branches of their food plants. The water in the vases needed regular changes - after all I was breeding moths, not mosquitoes! 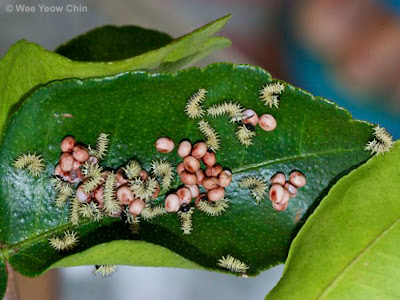 
Within nine days most of the eggs hatched into 7 mm grey-white caterpillars with black heads. Projecting from each segment was a ring of tubercles, the tips covered with a tuft of black hairs.  The first thing these tiny caterpillars did was to eat up the eggshells.  As they grew, they moulted at regular intervals and produced small pellets of frass. These pellets were colourful among the caterpillars feeding on Starfruit leaves, brown on Limau Purut and darker brown on Blue Mahang. Frass of older caterpillars failed to show such differences in colour. 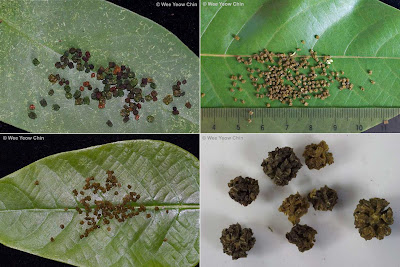 
It was relatively difficult to spot the early moulting as the process lasted a few minutes and the emerging caterpillar immediately ate up the discarded skin, leaving no traces. However, with later moults, the caterpillars did not to eat the old skin, or if they did so, they took their time, thus it was relatively easy to spot them. 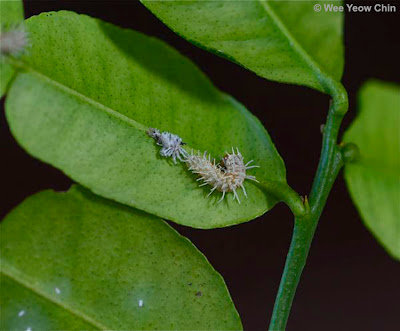 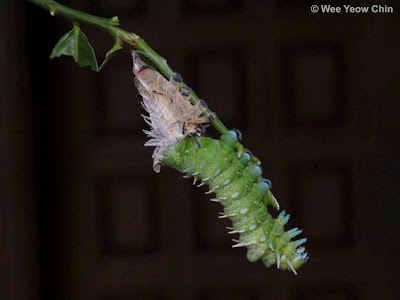 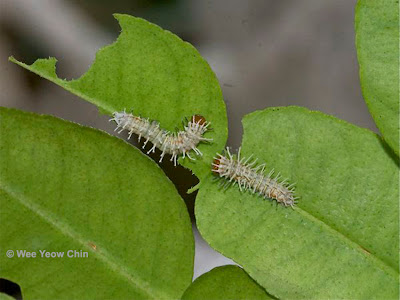 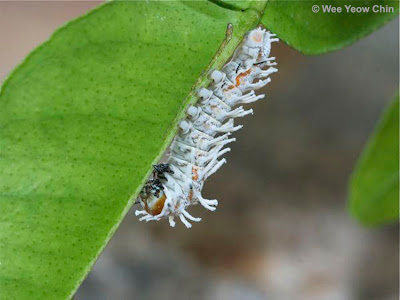 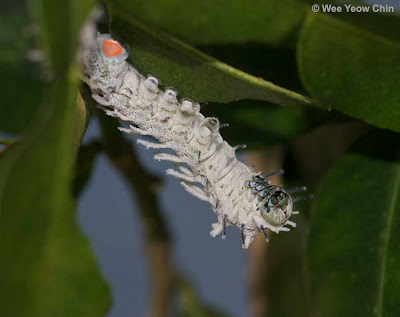 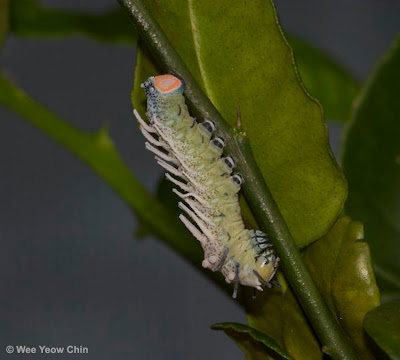 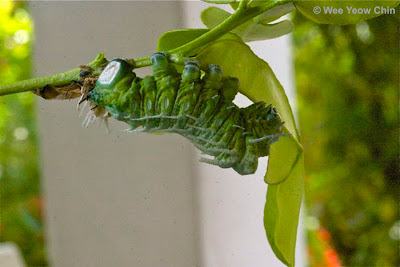 
Moulting was documented during the final moult. The skin suddenly appeared dried and wrinkled. The old skin then turned white and translucent]. Contracting and expanding its body continuously helped the caterpillar separate the old skin from the new.  Further vigorous movements caused the old skin to split around the anterior end.  All this time the caterpillar was firmly attached to the twig with the help of the anal clasper. Wriggling and forward movement with the help of its prolegs helped it move out of its old skin to eventually leave it behind. The entire process took less that half an hour.
http://www.youtube.com/watch?v=dEnGa0_hyEU&feature=plcp
http://www.youtube.com/watch?v=bKPlpDa21Uc


Exactly when the caterpillar molted varied with the individuals, some occurring earlier than others. It took 50-57 days for the first batch of caterpillars to start pupating from hatching and only 38-52 days in the case of the second batch. 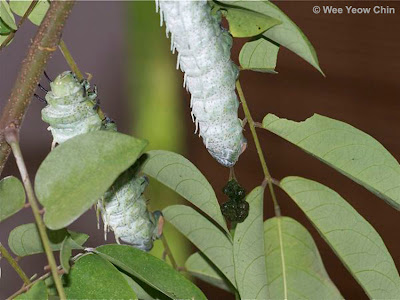 As mentioned earlier, the first batch of caterpillars ended in four pupae of which two successfully eclosed. With the second batch, there were 18 pupae and all eclosed. 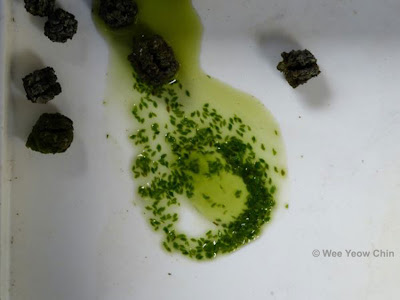 When a caterpillar had grown to its full size after weeks of intermittent feeding, it rested for some time before proceeding to the next stage of its metamorphosis. It then voided its stomach content, a greenish liquid containing numerous tiny pieces of undigested leaves. The caterpillar then became restless, moving about the twigs for up to 36 hours, apparently in search of a suitable spot to pupate. This, of course was under “culture” conditions. We do not know what happens in the wild. 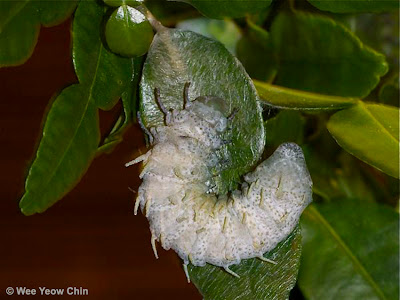 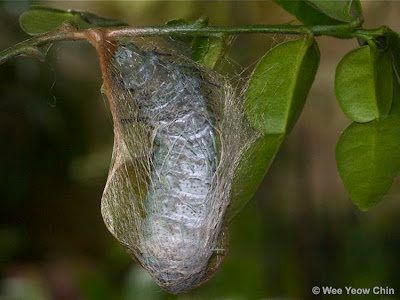 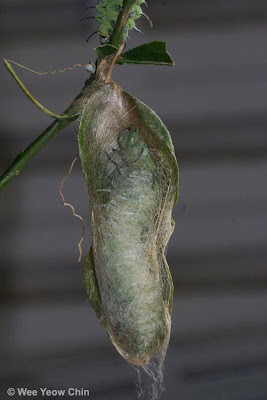 
Once the caterpillar was satisfied with the spot, it moved its body sideways, spreading a layer of silk on the leaf surface . At the same time it spread silk around the leaf stalk and its attachment to the twig. This was to ensure that the leaf it was pupating on would not get detached from the twig before eclosure. Only then did the caterpillar begin to create a silk cover over itself. The completed pupa on a Limau Purut leaf was a neat elongated structure, 6-7 cm long and 2.5-3 cm wide. With the compound leaves of Starfruit, a number of leaflets would cover the pupa. 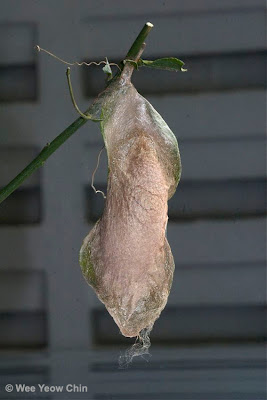 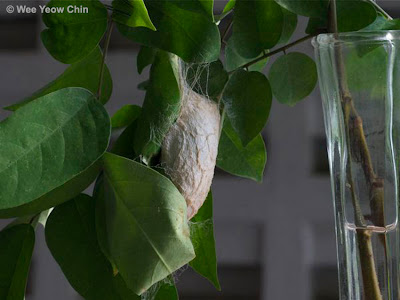 
Silking took more than 12 hours to complete
http://www.youtube.com/watch?v=qrbQgrwF2wI&feature=plcp
Sometimes the pupating caterpillar discharged a liquid that dripped from the bottom of the pupa case. It would be another 22-29 days before the adult moth appeared. 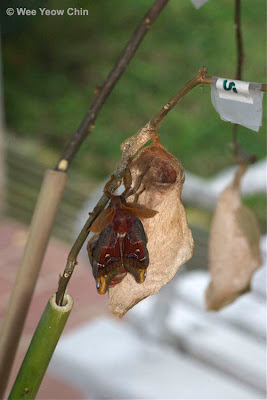 Trying to catch the moment of eclosion was elusive to say the least. For three weeks my vigil was long and tedious, sometimes  even sleeping with the pupae by my side. After all, eclosion can happen any time of the day or night. And exactly how many days to eclosion varies. The first two pupae from the early batch of caterpillars eclosed after 25 days. Knowing this did not help as those from the second batch developed a few days earlier. However, having 18 pupae to keep track with was helpful. 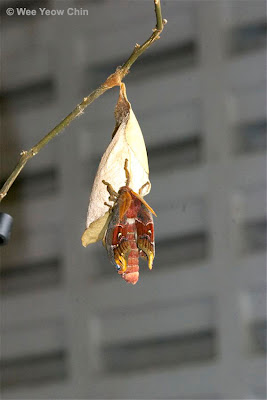 The first three eclosions of the second batch occurred during the early hours of the morning, probably between 0400-0500 hours. The fourth pupa took me by surprise when it eclosed during the evening. After four failures I got lucky with the fifth. It also happened in the evening. I was watching the pupa. There were scratching sounds from within. Unfortunately in a moment of inattention the emerging moth simply crawled out of the pupa case in less than a minute. I missed the crucial moment of emergence but managed to document the subsequent sequences. 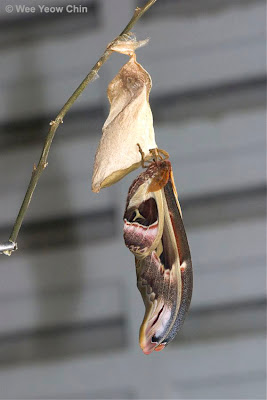 I was successful in catching the emergence of the adult moth on video only with the ninth pupa. The process was long and tedious as the apical opening of the pupa case was apparently a little too small. The entire process took 6 minutes and the moth then hung from the bottom of the case until its wings were fully expanded.
http://www.youtube.com/watch?v=0fMaK6l28RM&feature=plcp 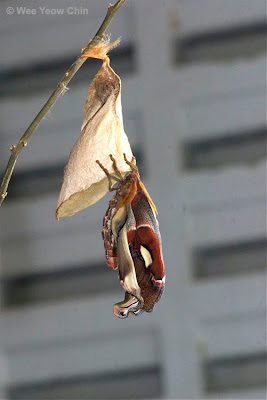 The next eight pupae eluded me as eclosion came mostly in the early morning, with two in the evenings. However, a second successful encounter came with the last pupa where the adult squeezed easily through the small opening of the silken case in less than 3 minutes.
http://www.youtube.com/watch?v=e9jx--mcsrI&feature=plcp


Since my first encounter with Atlas Moths in 2004, I have been obsessed with finding out how the adult moth emerges from the pupa case. So finally I have satisfied my curiosity and I have two video clips to show for it.


Once the adult moth had emerged from the pupa case, it crawled down to the lower end and hung out its wings as fluids from its abdomen were pumped through the veins until the wings became fully expanded. This can take up to two hours before the wings were fully expanded and functioning.
http://www.youtube.com/watch?v=4eNpWKae4RA).


Stay tuned for the final episode!

Posted by Commander at 9:22 PM

The eggs that were laid by my female (wild caught) all failed to hatch. And of all the pupae I had (15 of them) only 3 hatched deformed moths. The rest have yet to eclose.

From my experience with deformed butterflies or moth, it is mostly because of excessive loss of fluids or lack of them in the diet.

Fault was squarely on myself as sometimes, they were out of food for a few hours before i got new leaves. Other times, the leaves were a little bit dry.

With less fluids, they do not have sufficient hydraulic power to unfurl the wings totally.

Hello, I have only 1 egg... From what I read, it's quite unlikely that I'll get a noth at all, but I still want to try. It's only 2 days old, so I still have a few days to find the best leaves for it. I was thinking mango leaves. What do you think?

Hi, I just want to ask how many days are does it take per instar?

First, your butterfly blog is great! I have used it many times to crosschecks hostplants and species to compare with what we observe here in Munting Buhangin, Occidental Mindoro, Philippines. We have raised mostly swallowtail butterflies but also a lot of hawk moths.
Now it is our first time to raise "attacus lorquinii" - we collected 55 eggs, all hatched but some caterpillars died, mostly during skin shedding. We have six cocoons (since March 31) and six more caterpillars.
We have tried various food plants incl. langka and mango but preferred leaves were those of kalamansi.
And because initially we had so many caterpillars, we built a "butterfly house" out of discarded screen doors for them.
Once again, thank you this excellent and informative website!