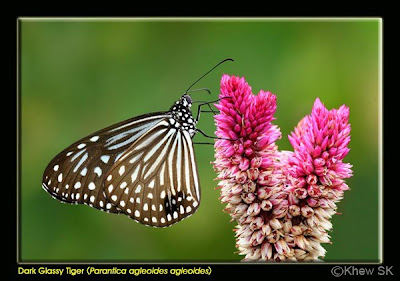 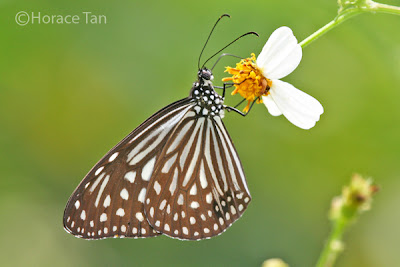 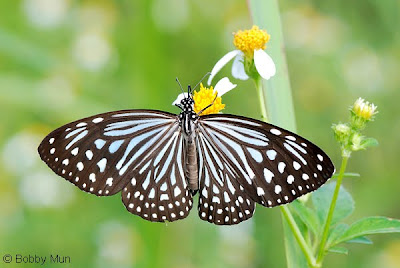 Above, the wings are  bluish grey with veins and all margins blackened. On the forewing, there is a long pale streak in space 11 above the cell, whilst the bluish grey  patch in the cell is divided by narrow black longitudinal streaks into two or three sub-patches. On the hindwing, the black central black streak in the cell is as wide as the bluish grey patches on either side of it. The same applies to the black streak in space 1b. Underneath, the markings resemble those on the upperside but in lighter colour. The male has a distinct brand near the sub-tornal area of the hindwing. 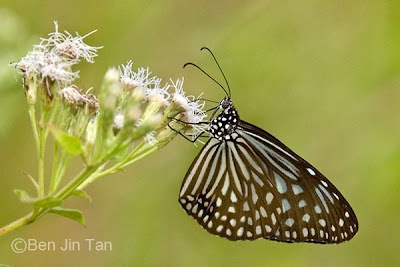 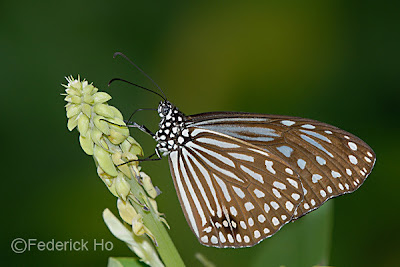 Field Observations of Butterfly Behaviour:
Just like its cousin, the Blue Glassy Tiger, this species is locally common in Singapore and is most  likely encountered in coastal mangrove habitats such as the Sungei Buloh Wetland Reserve and Pasir Ris Park. Occasionally the adults can also be spotted in the nature reserve and in urban parks and gardens.  Dark Glassy Tiger shares the same habitats with the similar-looking Blue Glassy Tiger (Ideopsis vulgaris macrina) and the two are difficult to tell apart when they are in flight. Once settled on a perch, Dark Glassy Tiger can be identified by the presence of the longitudinal streaks in the forewing cell, in contrast to the transverse streaks for  the Blue Glassy Tiger. The sun-loving adults are slow and unhurried in flight, and prefers open but sheltered environments. As with many members in the Danainae subfamily of butterflies, the male extrudes a pair of yellow hair pencils when alarmed. 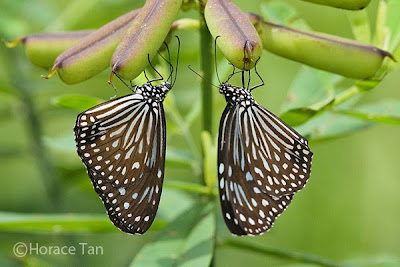 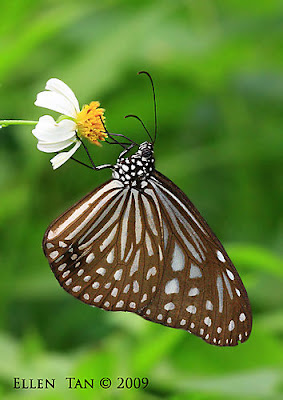 Early Stages:
The local host plant  is Tylophora flexuosa,  a climber typically found in back mangrove habitats.  The caterpillars of Dark Glassy Tiger feed on the young and  tender leaves in its early instars but move on to the more mature and larger leaves in later instars. 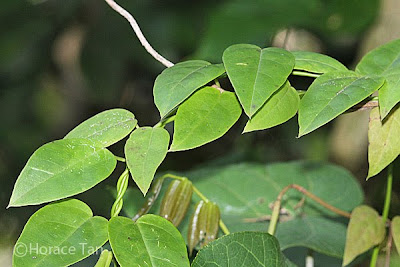 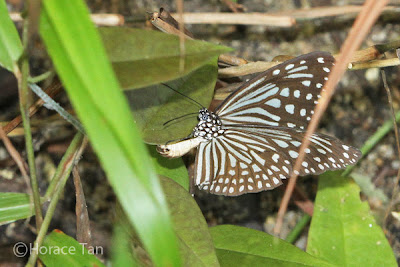 A mother Dark Glassy Tiger laying egg on the underside of a leaf of the host plant.


The eggs of the Dark Glassy Tiger are laid singly on the host plant, either on the underside of young leaves or on the stem of a young shoot. The whitish egg resembles a pointed rugby ball standing on one end  (about 1.75mm in height, 0.8mm in diameter). Longitudinal ridges run from the top to the base and there are shallow transverse striations between the ridges. 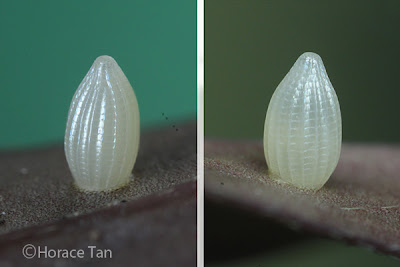 Eggs of the Dark Glassy Tiger. 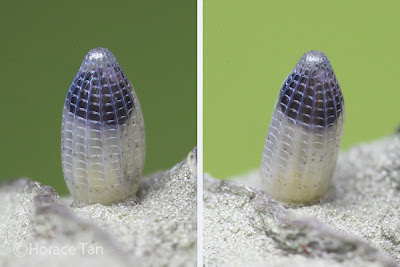 Mature eggs of the Dark Glassy Tiger with the black head capsule visible.


The egg takes about 3-4 days to hatch. The young caterpillar emerges by eating away part of the egg shell. The rest of the egg shell becomes the first meal for the newly hatched  which has a length of about 2.2-2.3mm. Its cylindrical body is whitish and has a fair number of short setae. The large head capsule is black in color. A pair of very short and black dorso-lateral  protuberances can be found on the 2nd thoracic and the 8th abdominal segments. Another pair of small black dash-shaped dorso-lateral patches are visible on  the prothorax. All eight pairs  of legs are black in colour and there is a large black anal plate. 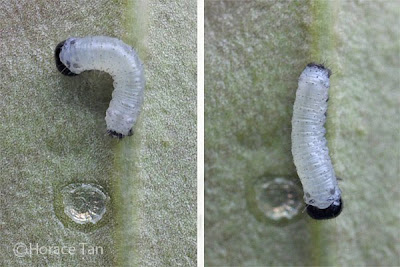 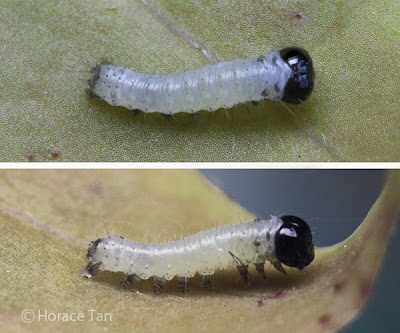 Two views of a 1st instar caterpillar, early in this stage, length: 2.5mm.


Once the young caterpillar  moves on to feed on the young leaves over the next few hours, its body takes on a dark green coloration in most parts, and numerous white oval-shaped markings. The two pairs of protuberances becomes wine-red in colour and are longer and projected outwards.   This instar lasts for 2-2.5 days with the body length reaching 5mm before the moult to the 2nd instar. 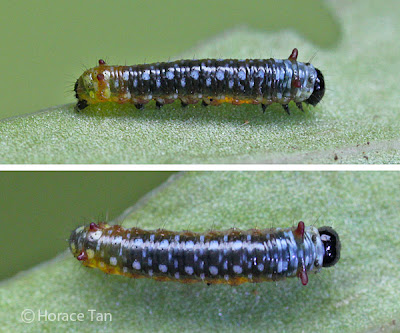 
The body of the 2nd instar caterpillar is dark  purplish brown and adorned with rows of dorsal, dorso-lateral, lateral  and spiracular spots, most of them being white in colour. In contrast,  the dorso-lateral and spiracular spots on the thoraic and posterior abdominal segments appear in lemon yellow. The dorso-lateral spots are larger and roundish. The short protuberances on the 2nd thoracic and 8th abdominal segments in the 1st instar have become longer and fleshy processes with the pair on the mesothorax much longer. These processes are coloured as per the body base colour, albeit in a darker shade.  This instar lasts about 2  days with the body length reaching 8-8.5mm before the moult to the 3rd instar. 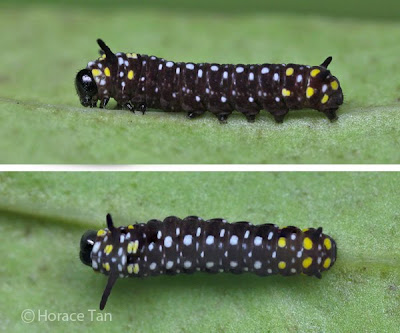 Two views of a 2nd instar caterpillar, early in this stage, length: 5.5mm 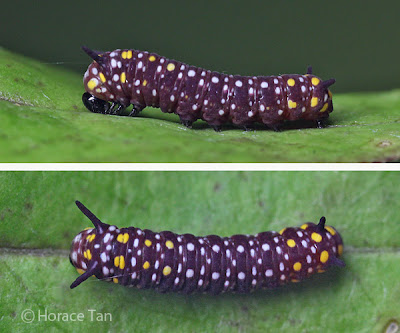 Two views of a 2nd instar caterpillar, later in this stage, dormant prior to its moult, length: 8.5mm

The 3rd instar caterpillar is similar in appearance to the 2nd instar caterpillar but  with dorso-lateral and  spiracular rows of yellow spots being present on all segments. The two pairs of processes have again become proportionately longer and filamentous. The number of small white spots adorning the body surface appears to have increased compared to the earlier instars.  This instar takes about 2 days to complete with body length reaching about 13.5-15mm. 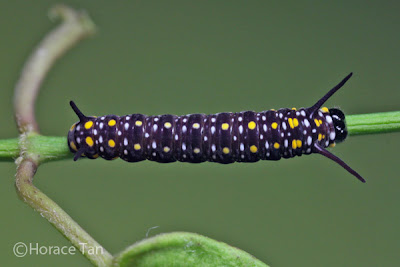 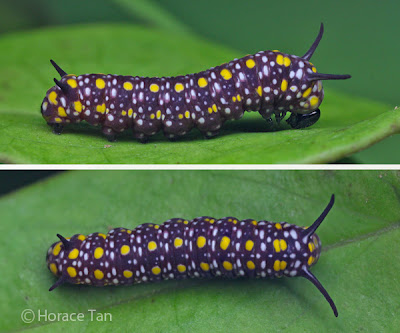 
Retaining very much the same body features from the earlier two instars, the 4th instar caterpillar distinguishes itself in having proportionally longer processes, and with the meso-thoracic pair  having the tendency to flex forward. The black head capsule bears two large upper white spots and two small and lower white spots, in addition to a central white spot on the frons.  This instar lasts about 3 days with the body length reaching about 19-20mm. 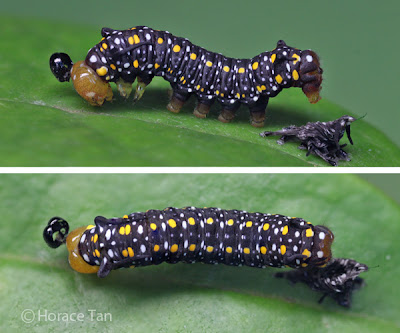 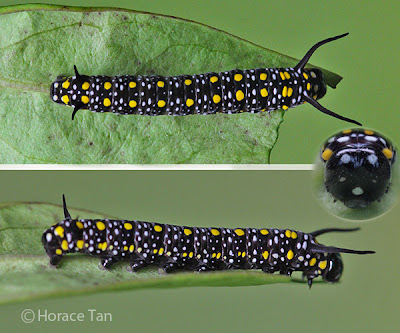 Two views of a 4th instar caterpillar, late in this stage,   length: 19mm. 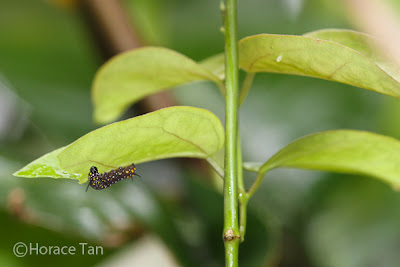 A 4th instar caterpillar found on its host plant in a wetland reserve.
Note the presence of an egg on the underside of a higher leaf to the right.

The 5th and final instar resembles the 4th instar closely. The head capsule takes on  3 additional pairs of white spots on the periphery.This instar takes about 5 days to complete and with the body length reaching to about 33-36mm 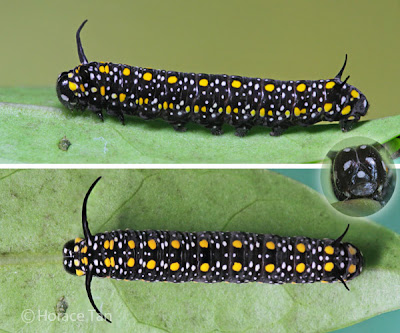 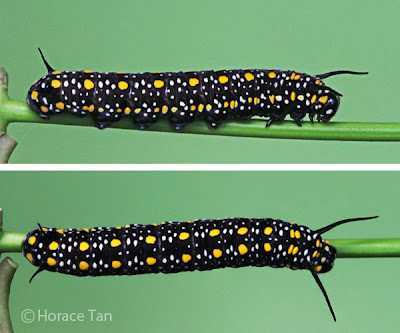 Two views of a 5th instar caterpillar, late in this stage,  length: 33mm.


On the last day of the 5th instar, the caterpillar ceases feeding. Its body becomes shortened and the dark purplish brown base colour decolorises to a dark shade of greyish brown. The fully grown caterpillar  wanders around in search of a pupation site. Typically it comes to a halt on a branch/stem or a leaf underside, where the caterpillar spins a silk pad from which it  next hangs vertically to take on the pre-pupatory pose. Within the few hours prior to pupation, the caterpillar gradually relaxes and lengthens to a straight posture. Waves of contraction soon travel from the the rear end to the head until the pupation event kicks in. 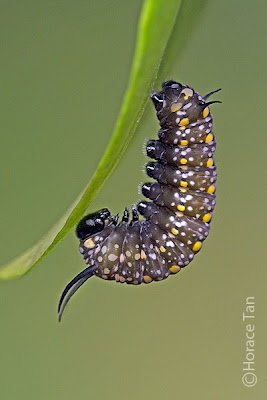 A pre-pupatory larva of the Dark Glassy Tiger.


Pupation takes place about 0.5 days after the caterpillar assumes the hanging posture. Typical of the pupae within the Nymphalidae family, the pupa of the Dark Glassy Tiger suspends itself from the silk pad with no supporting silk girdle. The pupa is lime green and is somewhat barrel-shaped. It has a median transverse silvery line marked on the lower edge with a series of black spots. Another two rows of transverse black spots lie above this silvery line. Several scattered silvery spots adorns the dorsum of the thorax and the wing pads. Two pairs of broad black patches lie close to the cremaster on both the ventral and dorsal sides.  Length of pupae: 17-19mm. 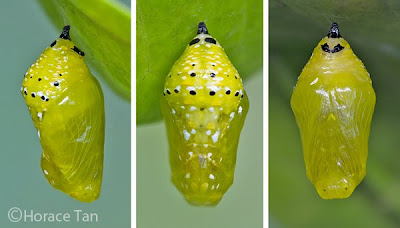 Three views of a freshly formed  pupa of the Dark Glassy Tiger. 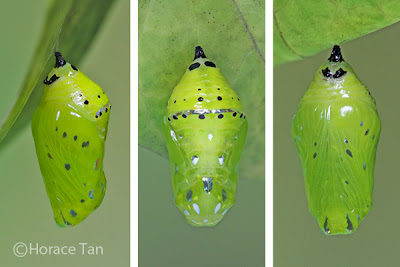 Three views of a pupa of the Dark Glassy Tiger. 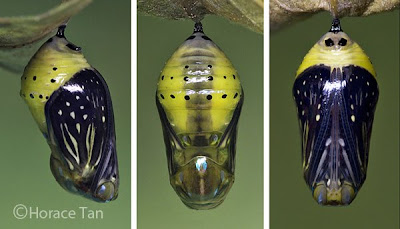 Three views of a mature pupa of the Dark Glassy Tiger.
The pale streaks and some of the spots  can be seen in the wing pad area.

The eclosion event of a Dark Glassy Tiger caterpillar.


After about 7 days of development, the pupal skin turns translucent as the development within the pupal case comes to an end. The spots/streaks on the forewing upperside also become discernible. The following day, the adult butterfly emerges from the pupal case. It then perches nearby to expand and dry its wings before taking its first flight. 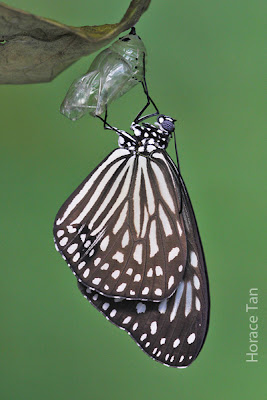 A newly eclosed Dark Glassy Tiger drying its wings while clinging onto its pupal case.