Butterfly of the Month - February 2012 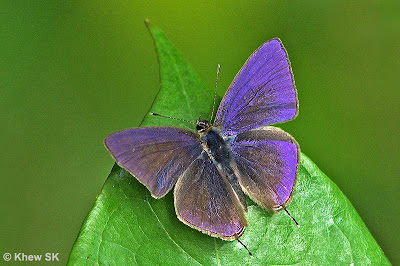 The month of February 2012 is well upon us now, as we head towards the last day of the 29th day of this once-in-every-four years affair for February. This year, 2012, has 366 days instead of the usual 365 days, because of the additional day in February. 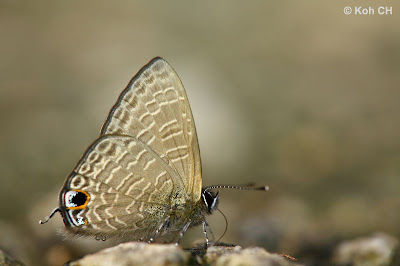 A leap year (or intercalary or bissextile year) is a year containing one additional day (or, in the case of lunisolar calendars, a month) in order to keep the calendar year synchronized with the astronomical or seasonal year. 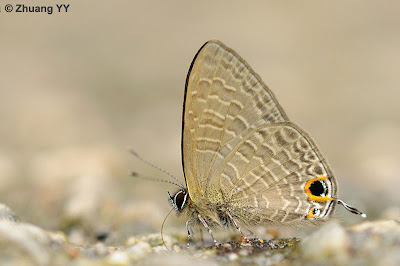 In the British Isles, it is a tradition that women may propose marriage only on leap years. I presume that, in the first instance, the woman has to catch her man first, before doing so. In the cartoon below, the unsuspecting gentleman is as vulnerable as a butterfly sitting and enjoying itself, before the collector's net slams down on it! 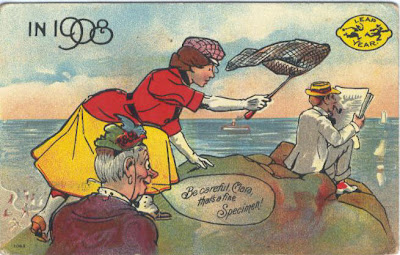 Two more observations about leap years - (1) that a leap year will give a full number result if you divided the year by 4, whilst doing so with other years would give you an additional fraction remaining. Also, (2) the Summer Olympics (this year in London) will always also fall on a Leap Year. 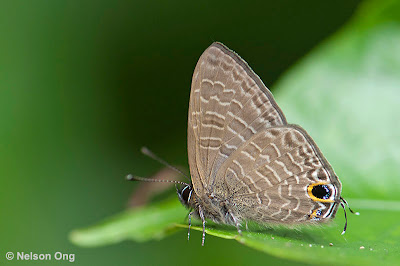 The first two months of the year has been rather quiet in Singapore. Other than the 15-day Lunar New Year festivities that were largely over by early February, and Valentine's Day on 14th of February, it had been relatively uneventful for most of us. But a lesson learnt from recent local developments that set social media networks ablaze and coffee-shop gossip, if you want to indulge in extra-marital affairs, stay out of the Singapore civil service and political parties. :) 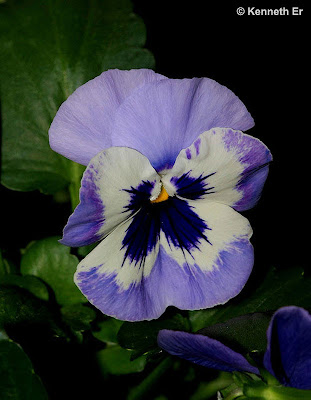 A flower of a Viola sp. cultivar

The birth flower of the month for February is commonly associated with the Violet. Botanically referred to as Viola spp., (family Violaceae) the Violet is a flowering plant with heart-shaped leaves that often has a purple or blue to it. Essentially a temperate region plant, it prefers cooler climates. 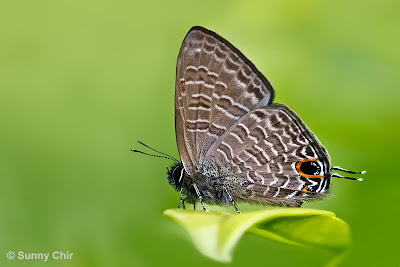 Violet flowers are formed from five petals; four are upswept or fan-shaped petals with two per side, and there is one broad, lobed lower petal pointing downward. Flower colours vary in the genus, ranging from violet, as their common name suggests, through various shades of blue, yellow, white, and cream, whilst some types are bicolored, often blue and yellow. 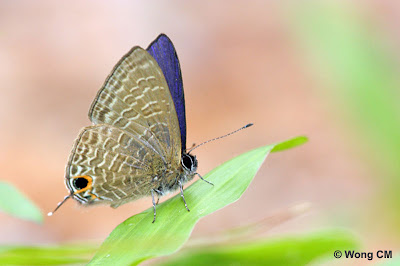 Our butterfly for February 2012, the Pointed Line Blue (Ionolyce helicon merguia), also features a violet/purple blue colour particularly in the males. A small butterfly with a wingspan of under 30mm, it is a relatively common species and the only member of the genus Ionolyce to occur in Singapore. 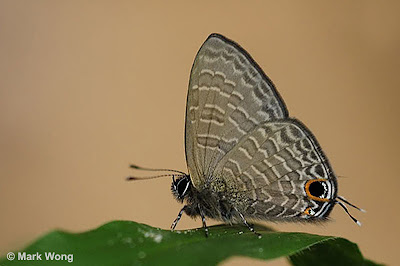 It appears in urban parks and gardens as well as forested areas of the nature reserves. It is a fast flyer and flies erratically, sometimes up to treetop levels. The wings of the male of this species are more angular than the closely related Nacaduba. 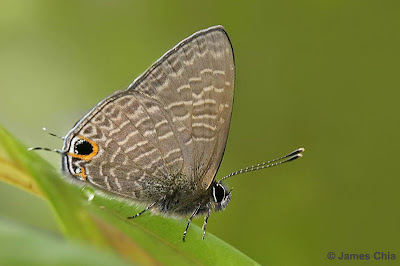 The male Pointed Line Blue is deep purple blue on top with a very thin black margin but otherwise unmarked. The female is brown on top with the discal area of the forewing and both basal areas lightly overlaid with bluish purple. In addition, hindwing has a series of dark spots along the wing margin. Underneath, they are both dull brown with narrow whitish wavy lines. There is an orange-crowned eye spot and a filamentous tail at vein 2 of the hindwing. 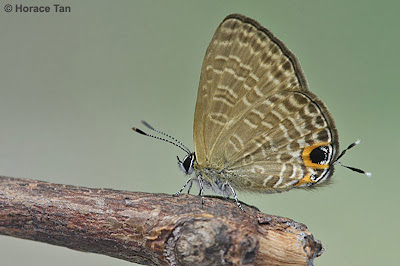 On hot sunny afternoons, the males of this species are observed to engage in aerial "dogfights". They fly rapidly from their favourite perches, and often stop and open their wings flat to sunbathe, displaying their spectacular violet-purple uppersides. 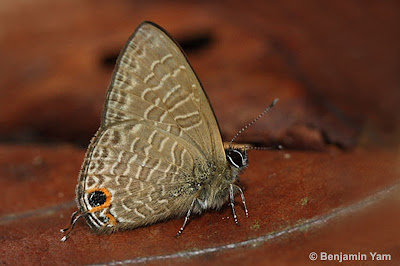 More often than not, the species is encountered puddling at damp spots in the nature reserves with wings folded upright. Females are much rarer, and found feeding on florets of flowering bushes. They also resemble the Nacaduba species and can easily be confused with similar lookalikes from this other genus of butterflies. 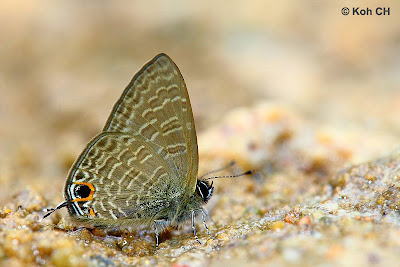 And we end this article by wishing a Happy Birthday to all the special people whose birthdays fall on the 29th of February, and who technically celebrate their birthdays only once every four years! 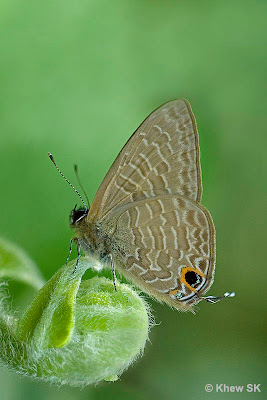 Singapore has plenty of fantastic stuff for you to spend superb holidays. As an addition the flights to Singapore you take next, do go for the beautiful butterflies you can explore there. Quite a unique attraction.