Life History of the Orange Awlet 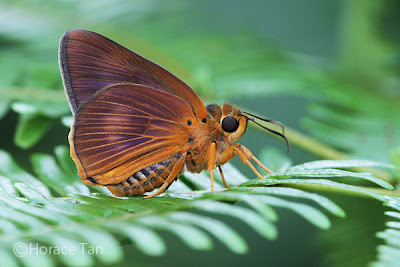 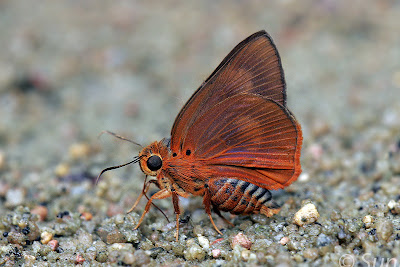 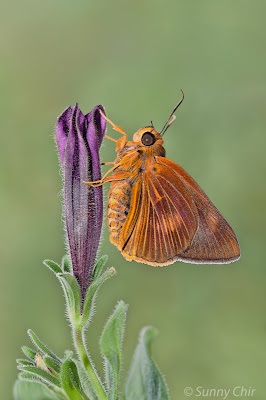 Burara harisa  (The Orange Awlet) is the look-alike cousin of the larger (and less common)  Burara etelka  (The Great Orange Awlet). Above, the male is coppery brown with no brand; the female is deep steely blue with greenish wing base. Underneath, both sexes are shaded in dark orangy brown and have pale orange streaks beyond the cell-end on both wings. Basal halves of the forewings are shaded purplish blue, more extensive and prominent in the female.  Orange  cilia are found on the hindwings, along the termen from spaces 1 to 3. The head, palpi, legs and the ventral surface of the thorax and abdomen are colored orange. 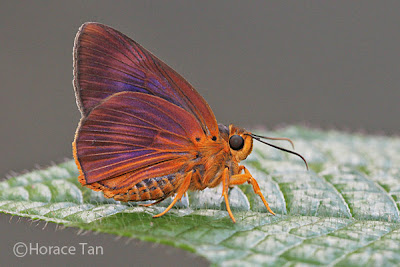 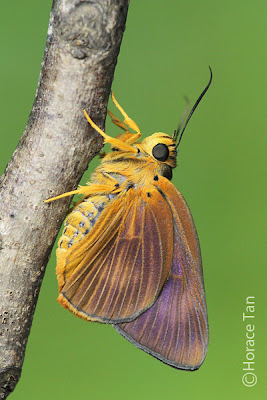 The adults can be found in the nature reserves as well as the Southern Ridges. They are more likely to be encountered in early morning hours and late afternoon, frequenting shaded forest areas. At times adults can be found nectaring at  flowering plants and puddling at damp grounds. Compared to the adults,  the larval stages are more readily found in leaf shelters on its host plant, Arthrophyllum diversifolium, which is a relatively common plant growing in the reserves as well as urban parks. The adults fly with swift, strong and darting flights. 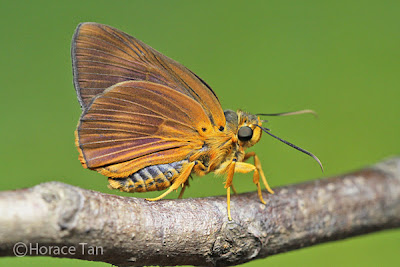 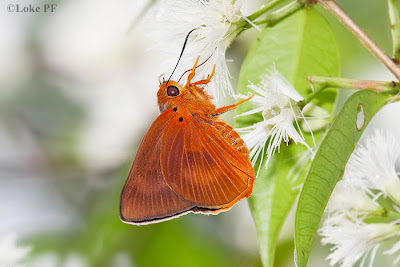 The caterpillars of the Orange Awlet feed on the leaves of the host plant, Arthrophyllum diversifolium, and seek concealment and protection in  a leaf shelter. For its shelter, an early instar caterpillar typically makes a sinuous cut from the leaf edge, and proceeds to fold the leaf fragment onto the leaf underside where silk threads are used to secure the leaf edge to the leaf surface. The shelters for the much larger caterpillars in late instars are simply made by joining the two opposing edges of a leaf. 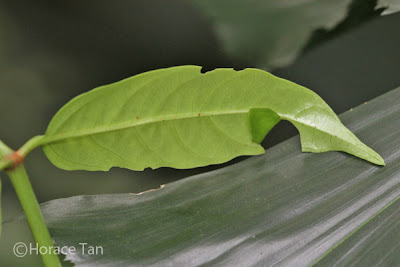 The leaf shelter of an early instar caterpillar seen on the leaf underside of the host plant. 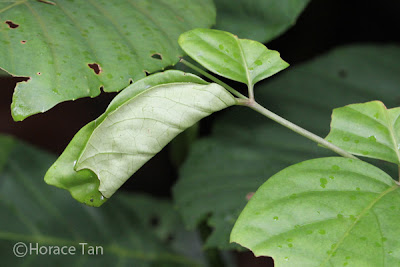 A leaf shelter of a late instar caterpillar of the Orange Awlet. 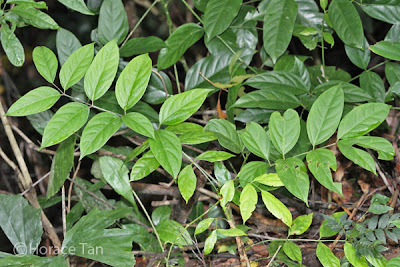 A young specimen of the local host plant: Arthrophyllum diversifolium. 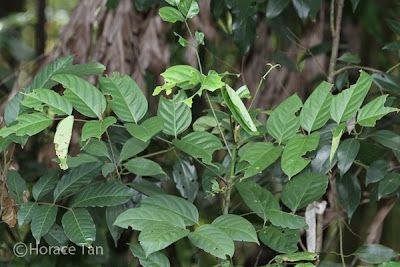 A far view of an Arthrophyllum diversifolium in a Hill Park  bearing signs of an infestation of the Orange Awlet.


The eggs are laid singly on the leaf upperside of a middle-aged or mature leaf of the host plant. Each dome-shaped egg is creamy white with a beige tinge. The micropylar sits atop and a number of vertical ridges running longitudinally from it to the base. An equatorial series of short, reddish, intermittent patches can be seen as the egg develops. The diameter is about 1mm.

Two views of an egg of the Orange Awlet

A sequence of three views of a maturing egg of the Orange Awlet over a span of 2 days.


It takes 3-4 days for the collected egg to hatch. The young caterpillar eats just enough of the shell to emerge, and has a length of about 2.9mm. Its pale  yellowish brown body is cylindrical in shape with rather long lateral and sub-spiracular white setae. There are dorso-lateral dark brown markings on a number of body segments.   The large head is pale brown with three black roundish markings. The head also bears similar white setae as those on the body. 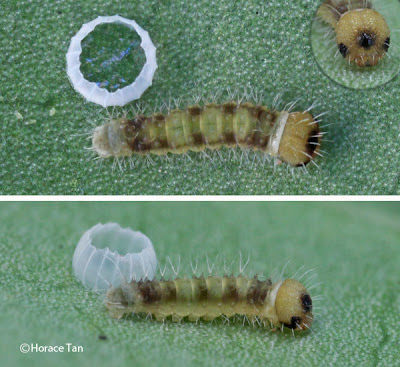 
The body soon takes on a green undertone after a few feeding sessions on the leaf. Its movement on leaf was observed to be rather quick-paced.  By the time the caterpillar lies dormant for its moult to the 2nd instar, its length has reached 4.5mm. The 1st instar takes a total of 2.5-3.0 days to complete. 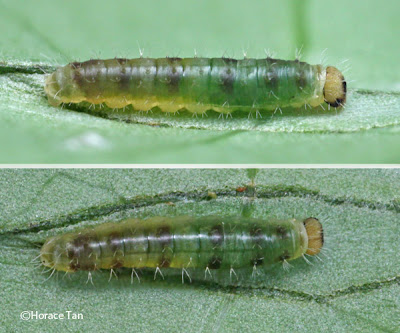 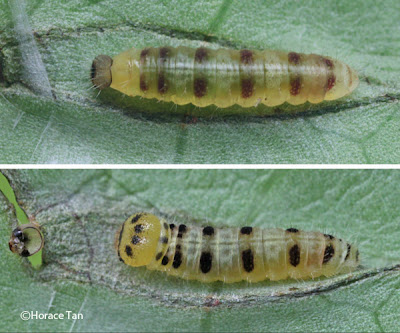 
The body of the 2nd instar caterpillar is yellowish green and has prominent black dorso-lateral patches on the thoracic segments, 2nd, 4th, 6th, 8th and 9th abdominal segments. The black marking on the 10th segment form a black stripe across the dorsum. There is a pair of faint yellowish dorsal bands and faint obligue markings between the black spots.   The head is pale orange with two rows of black spots.  This instar lasts about 3-4 days with the body length reaching about 9mm. 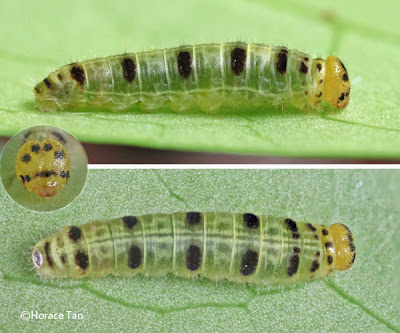 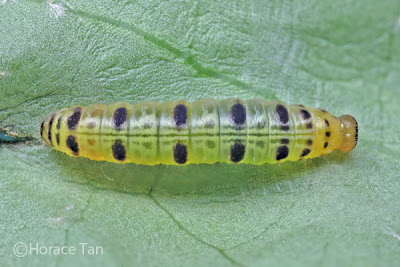 2nd instar caterpillar, dormant prior to its moult, length: 8mm.


The 3nd instar caterpillar resembles the 2nd instar caterpillar closely in markings and coloration. The dorsal bands and dorso-lateral bands/stripes are more prominent now, yellowish in abdominal segments and becoming whitish in the thorac segments.  This instar lasts a total of 3-4 days with the body length reaching about 14mm. 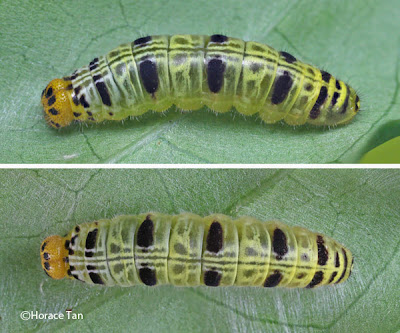 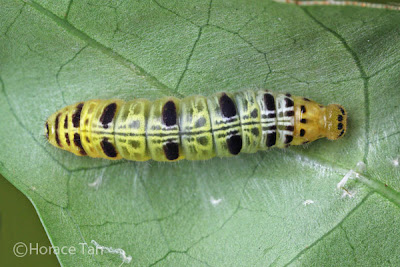 3rd instar caterpillar, dormant prior to its moult,  length: 13.8mm.

The 4th instar caterpillar resembles the 3rd instar caterpillar closely but has additional black spots/markings appearing between the yellowish/whitish dorsal and dorso-lateral bands.   Both the body and the head sport numerous short setae. This instar lasts 3-4 days with the body length reaching up to 25mm. 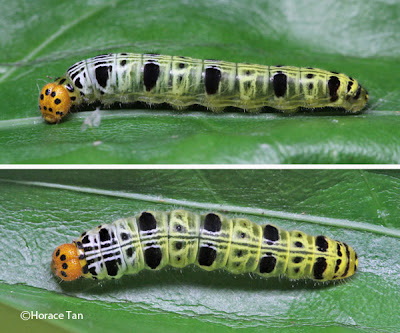 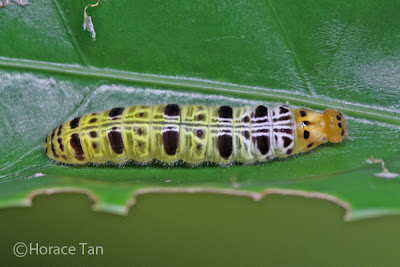 4th instar caterpillar, dormant prior to its moult, length: 23mm


The 5th instar caterpillar has larger and very prominent black spots and markings on all body segments. With more black patches filling in the spaces between the whitish/yellowish dorsal and dorso-lateral bands, it gives the impression of large saddle patches, one to each segment,  being traversed and criss-crossed by the whitish/yellowish lines.  This instar takes about 6-7 days to complete with the body length reaching 40mm. 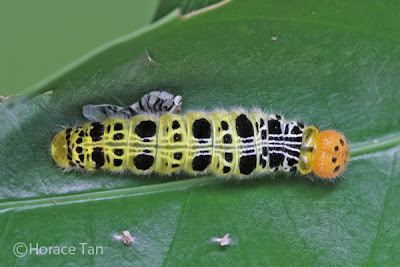 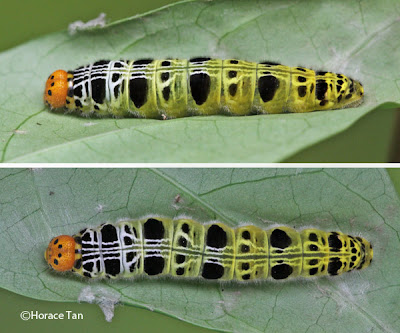 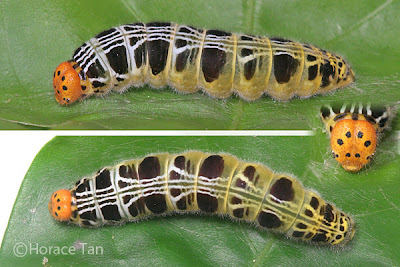 
Towards the end of  5th instar, the body of the caterpillar shortens gradually and its body base colour decolorised to a shade of beige with pink tinge between the black spots.  It then stays in its leaf shelter to become a pre-pupatory larva. Within the shelter, the pre-pupa prepares for the pupal phase with a series of silk construction work with the main pieces being a silk girdle across the dorsum of its anterior abdominal segments, and a short and thickened transverse silk band on the substrate near its posterior end. Both the dorsal point of the girdle and the transverse band are further secured by vertical/oblique threads to the inner wall of the shelter. Soon the pre-pupa becomes dormant in its leaf shelter and enters the prepupatory phase which lasts for about 0.5 to 1 day. 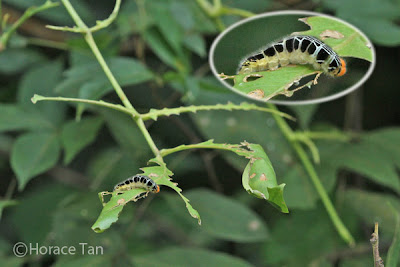 A final instar caterpillar of the Orange Awlet eating away on a nearly defoliated branch in the nature reserve. 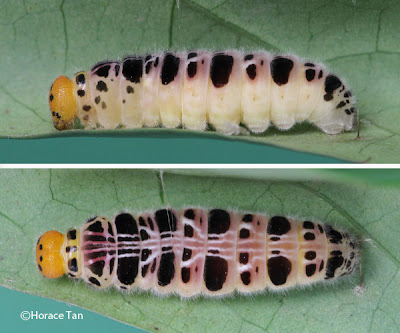 
Pupation takes place within the leaf shelter. The pupa is secured  with its cremaster attached to the short transverse band on the substrate and has a silk girdle. It has a short thorax, a rather long abdomen, a short and pointed rostrum. The body is initially orangy with reddish patches and large black spots. However all these markings fade away after a day and  the base color becomes a uniform pale milky yellow. The body becomes coated in a thin layer of whitish powerdery substance. There is a series of small dorso-lateral black spots on all body segments. Another series lines  the leading edge of mesothorax and one solitary spot sits atop the dorsum of mesothorax. Length of pupae: 22-23mm. 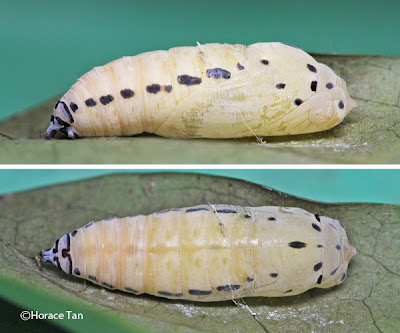 Two views of a  pupa of the Orange Awlet


After 8-9 days, the pupa becomes mostly black in color in the wing pads and parts of  the body segments, signally the end of development of the adult lying within. Eclosion takes place the next day. 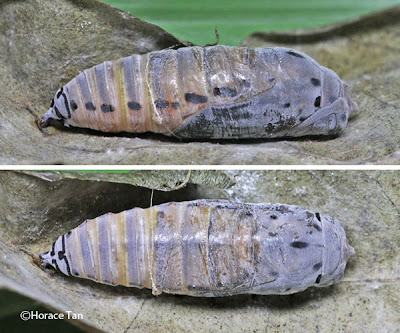 Two views of a mature pupa of the Orange Awlet. 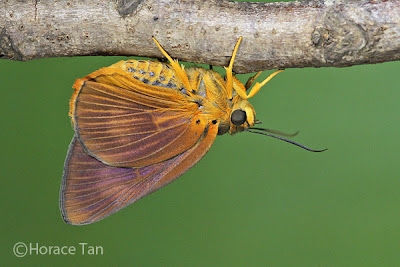