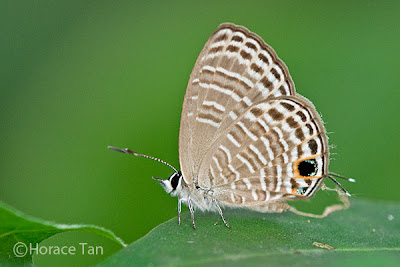 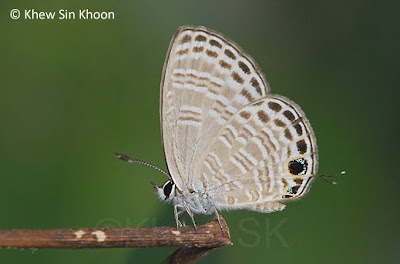 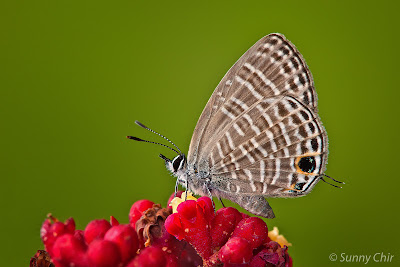 As a member of the pavana group (the Four-Line Blues), the adult does not have a basal pair of lines in the underside forewing cell. Above, the male is greyish  blue with a thread-thin  border; the female is brown with a pale blue discal patch on the forewing and blue dusting on the basal part of the hindwing.  Underneath, both sexes are greyish brown with the bands (post-discal, discal and basal) composed of a double series of whitish striae inwardly lined with darker lines with the space between them appear to be paler than the ground colour.  On each hindwing, there is an orange-crowned tornal spot lightly speckled with bluish-green metalic scaling.  Next to the tornal spot, a pair of filamentous white-tipped tails occurs at end of vein 2. Marginal and submarginal spots are black and stand out against the ground color of greyish brown. 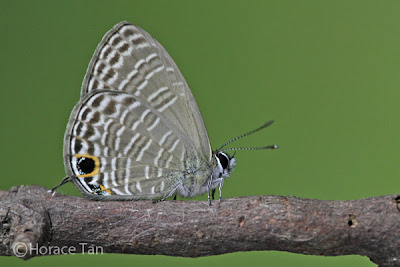 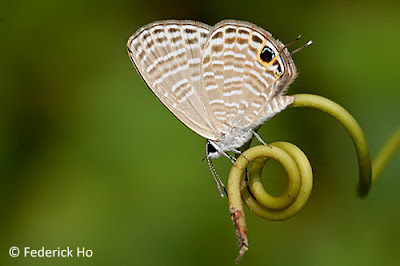 Early researchers for butterflies in the Malay Peninsula from the 60s and 70s [C&P4] noted that Nacaduba pavana "is seldom seen except in Singapore, where it is sometimes quite common on the landward edge of mangrove swamps."  This observation still holds true today as recent sightings of this species have been confined to the northern and  north-western corner of the Singapore island in an area covering Sungei Buloh Wetland Reserve, Kranji Nature Trail and the Mandai Mangrove. The adults have been seen flying in the vicinity of their host plants, which are common in these habitats, visiting flowering plants, puddling on wet ground and performing oviposition rituals. 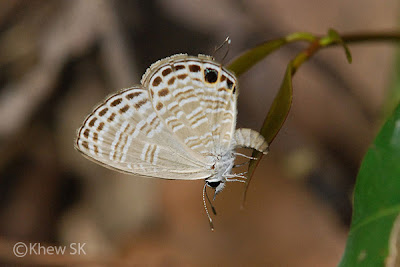 A female laying an egg on a young leaf of Derris trifoliata. 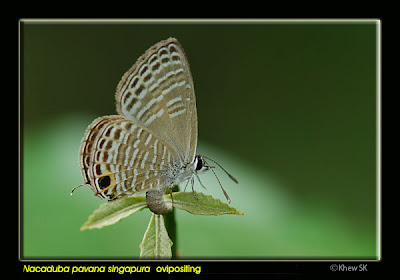 Another female ovipositing on a young leaf of Allophylus cobbe.

The Singapore Four-Line Blue is polyphagous and so far three plant species found in the back mangrove habitats have been recorded as its host plants. The caterpillars feed on young and tender leaves and sometimes young shoots of these plants. As in the case for most lycaenidae species, the caterpillars of the Singapore Four-Line Blue  are typically tended by a number of ant species. 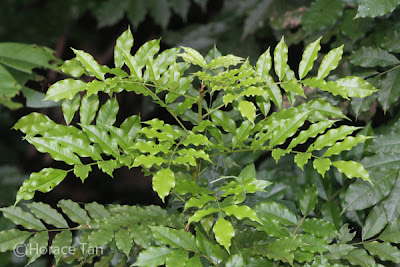 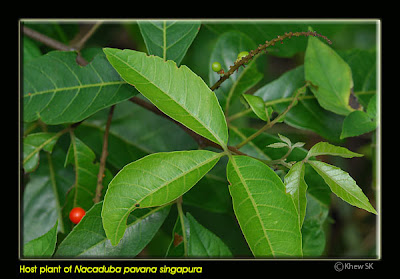 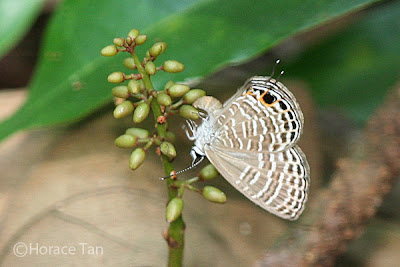 A mother ovipositing on a cluster of flower buds of Derris trifoliata. 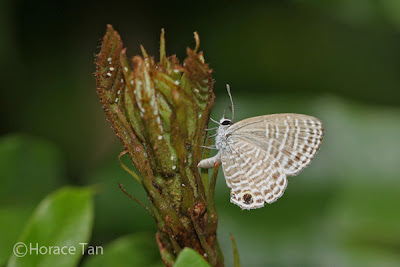 Another mother ovipositing on the young shoot of Andira inermis.


Eggs are laid on the young shoots or inflorescence of the host plants. It is not uncommon for a number of eggs to be found in close proximity on the same shoot, however the eggs occur singly rather than in clusters. Each egg is pale yellowish green, discoid and has a depressed micropylar on top. The egg surface is finely reticulated, slightly raised at the intersections of criss-crossing ridges. Th egg has a diameter of about 0.4-0.45mm. 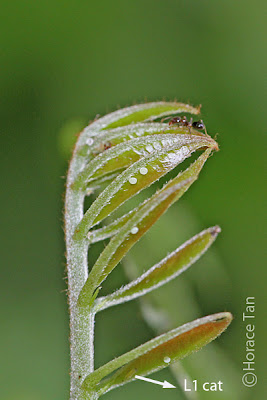 Eggs on young shoot of Andira inermis with a 1st instar caterpillar nearby. 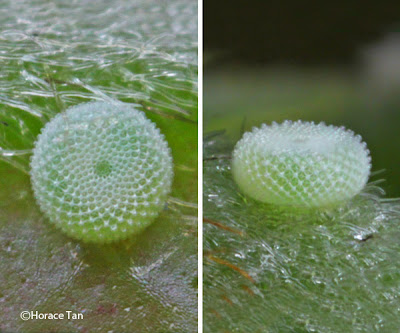 Two views of an egg of the Singapore Four-Line Blue. Diameter: 0.4mm.


It takes about  2 days for the egg to hatch. The young caterpillar consumes part of the egg shell to emerge. With a length of about 0.7-0.8mm, it has a pale yellowish body with long setae (hairs) dorsally and sub-spiracularly. The caterpillar assumes the typical woodlouse body shape as it grows. The body color  changes gradually to a brighter shade of yellow or red depending on the color form the caterpillar assumes. The first instar lasts for 1.5-2 days and the body length reaches about 1.8mm before the moult to the 2nd instar. A faint reddish brown patch appears on the dorsum of the 7th-9th abdominal segment towards the end of the first instar. 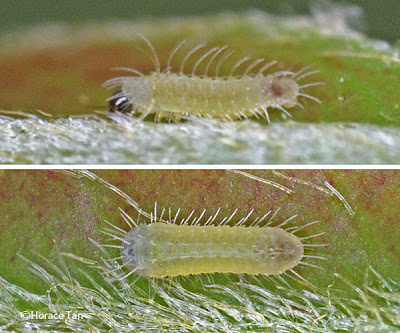 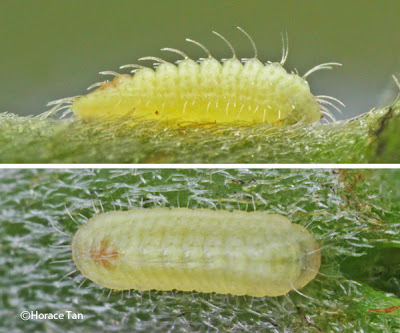 Two views of a 1st instar caterpillar, late in this stage, length: 1.8mm. 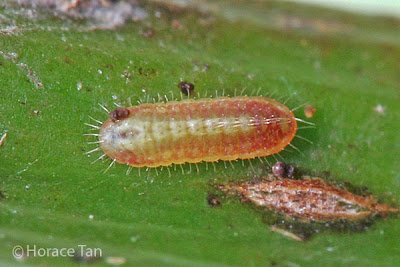 A red-form 1st instar caterpillar, late in this stage.


The long dorsal setae are absent in the 2nd instar caterpillar but now there are numerous short setae present all over the body surface. The body color is mainly yellow  with a greenish undertone or mainly red. A large, diffused, bright red to reddish brown patch occurs on the dorsum stretching from the 7th to the 9th abdominal segments in both color forms. The 2nd instar lasts for 1.5-2 days and the caterpillar grows to a length of about 3.5mm to 4mm. 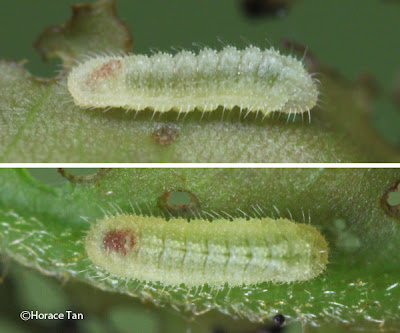 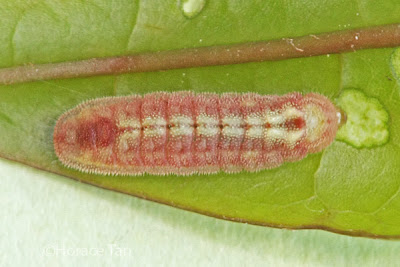 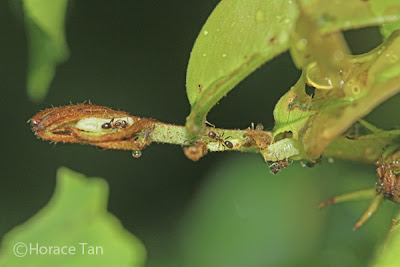 A field shot of caterpillars of Singapore Four-Line Blue on a young shoot with ants in attendance,
How many caterpillars can you see?

The 3rd instar caterpillar resembles the 2nd instar caterpillar closely but with the dorsal patch on the 7th to 9th abdominal segments much more prominent. In some specimens,  faint intermittent markings in red to reddish brown also appear dorso-laterally, and on the dorsum of the 2nd thoracic segment.  After 2 days in this stage with the body length reaching a maximum about 6.5mm, the next moult  brings the caterpillar to its final instar. 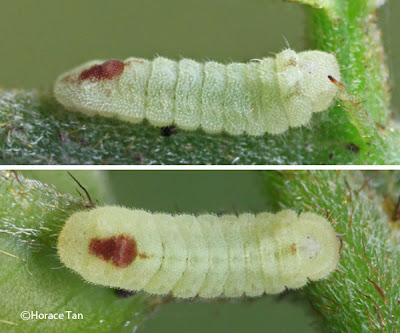 Two views of a 3rd instar caterpillar, early in this stage. 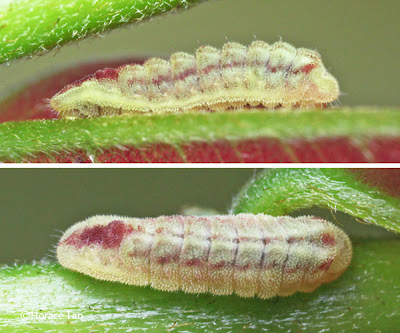 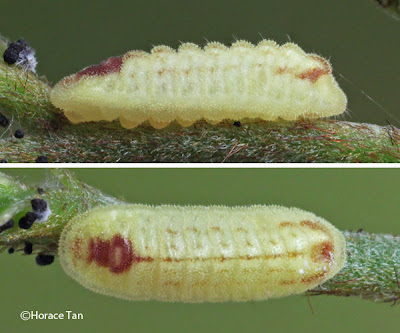 Two views of a 3rd instar caterpillar, dormant prior to its moult. 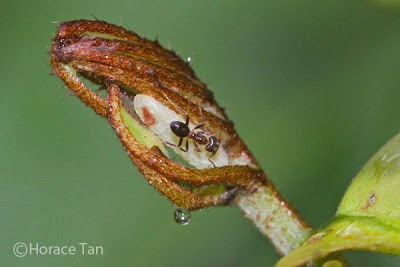 A 3rd instar caterpillar with an attending ant in the field.


The 4th instar caterpillar are similar to the 3rd instar caterpillar but with all red and reddish brown markings much more prominently marked and in sharp contrast to the ground color.  The prothorcic shield is whitish and the dorsal nectary organ and ventacular organs are distinguishable on the posterior segments. 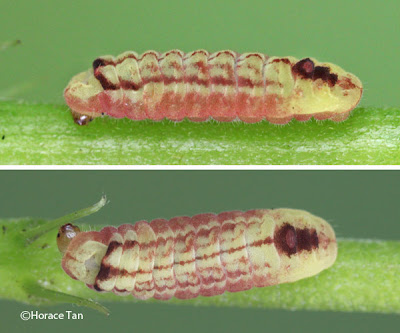 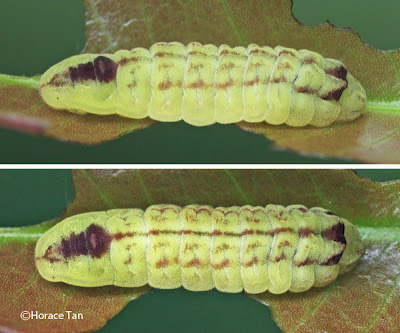 
The 4th instar lasts for 2-3 days and the body grows up to a length of about 12mm. On the last day of this stage, the caterpillar ceases food intake and its body shrinks in length and decolorises to a dull shade of pale brown. The fully grown caterpillar finally comes to  rest on a spot among leaves where it readies the site for pupation by spinning a silk pad and a silk girdle to secure itself. 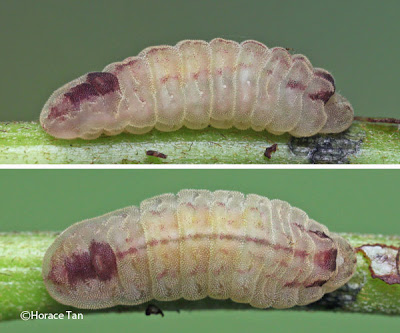 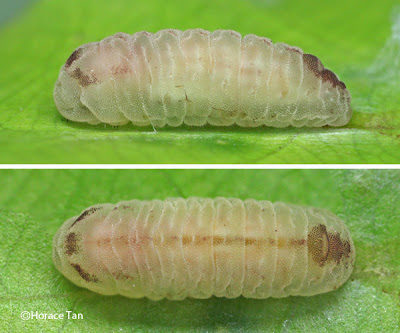 The next day, after 6-7 days of larval growth, pupation finally takes place. The pupa has the typical lycaenid form, and is 8-8.5mm in length. It is mostly yellowish brown and speckled with black spots of various sizes and shapes. 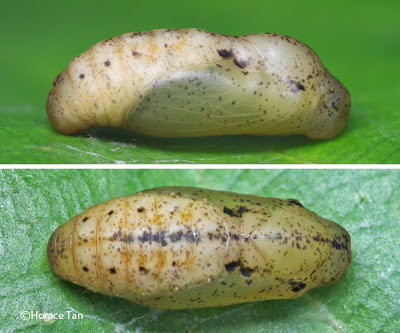 Two views of a pupa of the Singapore Four-Line Blue


Five to six days later, the pupa becomes darkened in color signaling the imminent emergence of the adult. The markings on the forewing upperside becomes increasing obvious through the pupal skin. The next day the adult butterfly emerges from the mature pupa. 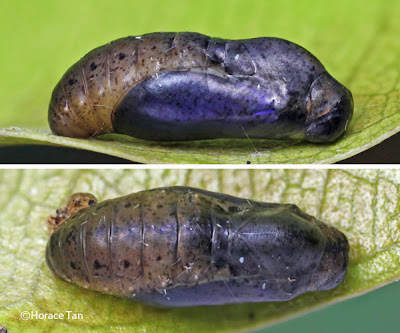 Two views of a mature male pupa showing the extensive bluish coloration in the wing pad. 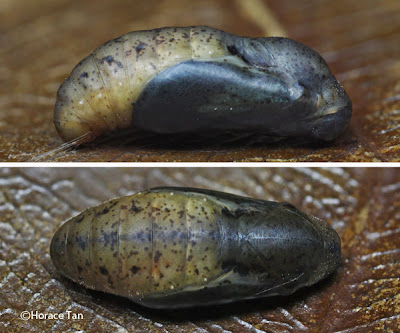 Two views of a mature female pupa showing the much less extensive bluish coloration in the wing pad.

An excellent set of macrophotos!

Thanks, Friend of HK for the kind words. :) I am very glad that you like the macro photos.

Hi Horace, I have a species of succulent plant caterpillars which I can't seem to identify. Would you be able to identify it for me?

Btw, those macrophotos really are amazing! What lenses do you have for that?!

Hi Asri,
Quite likely the succulent plant caterpillars are moth caterpillars and in which case I would be of little help. :) Anyway you can send me a link to that pic so that I can see whether it is of any butterfly species that I know.

The macro photos were taken with Canon 180mm and Canon MPE-65mm lenses.