Life History of the Brown Awl 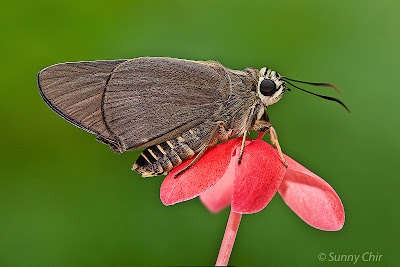 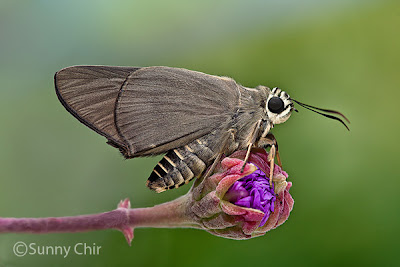 A Brown Awl perching on a flower bud in a forest clearing. 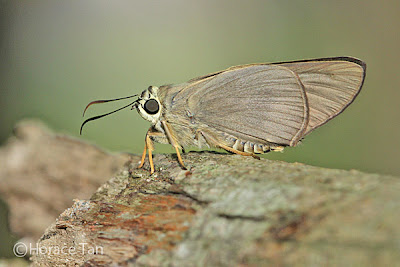 A Brown Awl taking in the afternoon sun on a fallen branch.

Physical Description of Adult Butterfly:
Adults have elongated wings and the hindwing is caudate at vein 1b and excavate along the termen between ends of veins 1b and 2. Above, the wings are dark brown with greyish green scalings at the wing bases. The female has prominent and elongated hyaline streaks in spaces 1b, 2 and 3, and the cell in the forewing. In contrast, these streaks in the male are rather small and subdued. Below, both sexes are pale greyish brown and largely unmarked. There is a small yellowish sub-tornal spot in space 1b of the hindwing, which usually goes unnoticed as the hindwings typically fold up in the dorsal area. 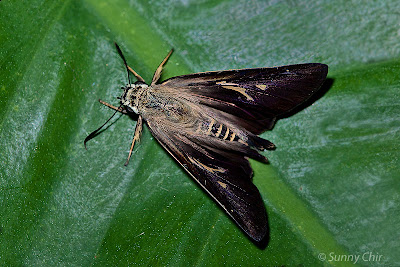 A partial view of the upperside of a female Brown Awl, note the prominent streaks/spots. 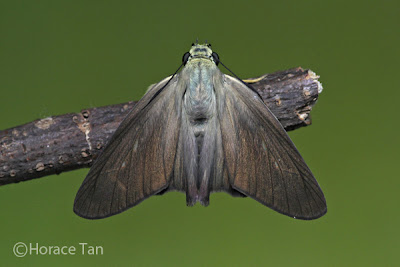 A view of the partially open wings of a male Brown Awl, note the inconspicuous streaks/spots.

This species is moderately rare in Singapore. Adults have been sighted in multiple locations across Singapore, including the Sungei Buloh Wetland Reserve, Mandai Orchid Gardens, Central Catchment Nature Reserve and also rarely in urban parks and residential areas. The fast flying adults have a habit of resting on the underside of a leaf or other plant parts when they rest among the foliage of a tree. 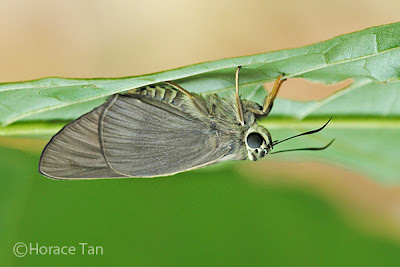 A Brown Awl perching on the underside of a leaf. A Brown Awl enjoys the sun while perching on a brick in MOG.

Early Stages:
Across its vast area of distribution stretching from South Asia to East Asia, and to South-East Asia and southward to Australia, Brown Awl utilizes host plants in several families. Both recorded local host plants, Terminalia calamansanai and Combretum sundaicum, are in the Combretaceae family. It is thus very likely that more host plants, either in the same family or others, are yet to be discovered locally for the Brown Awl. Caterpillars of the Brown Awl feed on the very young to the moderately young (before hardening) leaves of the host plants. 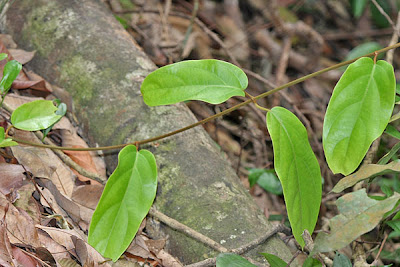 The eggs are laid singly on very young shoots of the host plants. Each egg is shaped like a bun with a flattened base (diameter: 0.6-0.7mm). Prominent ridges run from the pole to the base. The micropylar sits atop at the pole. Initially greyish white in coloration, the entire egg turns wine red as it develops, and then decolorizes again to yellowish red when the caterpillar is ready to emerge. 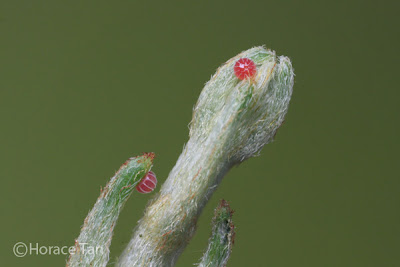 A close-up view of a young shoot of Combretum Sundaicum, showing two eggs of the Brown Awl. 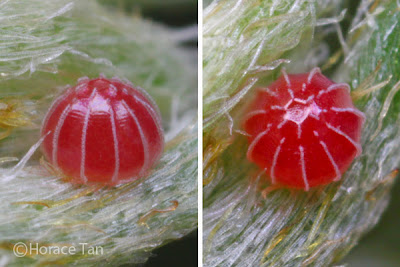 Two views of a 1-day old egg of the Brown Awl. 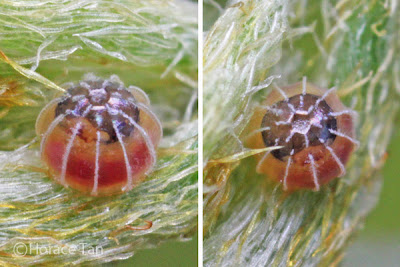 Two views of a mature egg of the Brown Awl, note the black larval head visible through the egg shell.

It takes 2 days for the collected egg to hatch. The young caterpillar eats just enough of the shell to emerge, and has a length of about 1.5mm. It does not make an attempt to devour the egg shell after its emergence. The golden and cylindrical body has a number of very short white setae. The large head is black, slightly bi-lobed and lightly hairy. The body turns pale yellowish green as it feeds on the leaf lamina and grows in this initial instar. 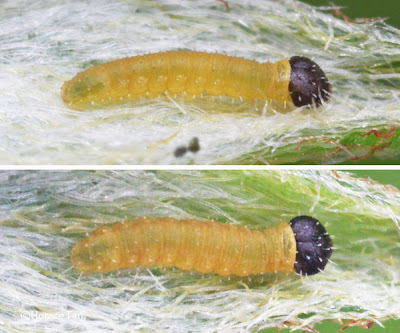 Two views of a 1st instar caterpillar, early in this stage, length: 1.7mm. 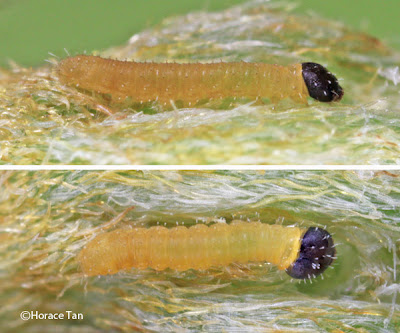 The young caterpillar constructs its first shelter by spinning a silk web over a void of space on the young shoot. It rests within the shelter and ventures out to eat on nearby leaf surface. In later instars, the Brown Awl caterpillars also construct leaf shelters but do so by joining leaf blades together. The larval growth of the Brown Awl is rapid in pace for all instars, with all but the final instar lasting only 1.5-2.5 days.

A late first instar caterpillar in its shelter. The focus was varied to show details in the net of silk threads securing the shelter.

After reaching a length of about 3.4-3.8mm in the 1st instar, the caterpillar moults to the next instar after a short dormant period. The 2nd instar caterpillar is pale yellowish green with a faint brown rings on its body segments, from the pro-thorax to the 8th abdominal segment. The yellowish head has an upper transverse brown stripe and two lower short stripes on each side of the adfrontal area. The body and the black head capsule are covered in numerous tiny setae. 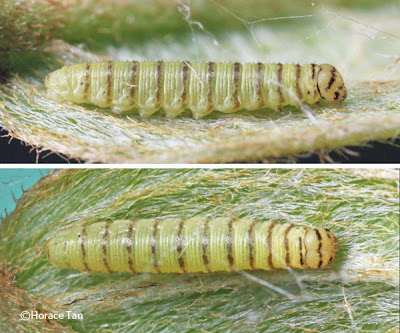 A second instar caterpillar in its shelter.

The 2nd instar caterpillar reaches a length of about 6.5-7.5mm, and after 1.5-2 days in this stage, it moults again. The 3rd instar caterpillar has 14 dark brown to black black rings, bold and prominent against the pale yellowish green of the body ground color. There is one ring to each of the 13 body segments and one on the posterior body edge. On the yellow head, the stripes have also become darker and more prominent. This instar lasts another 1.5-2 days with the length reaching 12mm. 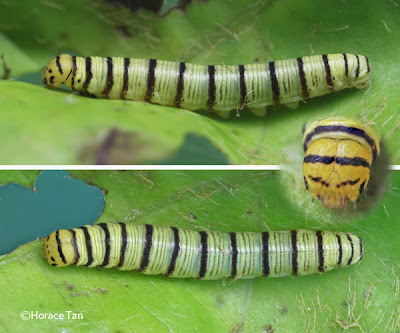 The 4th instar caterpillar resembles the 3rd instar caterpillar mostly but has additional intra-segmental dark rings, typically 3 to each segment. These rings are much thinner in width compared to the inter-segmental rings. This penultimate instar takes about 1.5-2 days to complete with the body length reaching up to 21mm. 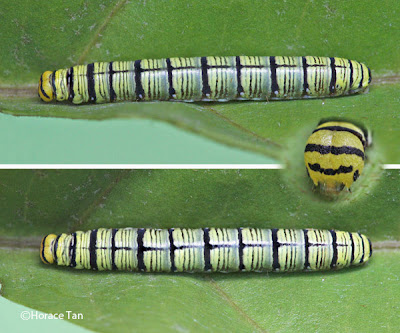 The final and 5th instar caterpillar has similar body markings as the 4th instar caterpillar. Noteworthy is that dark inter-segmental rings are particularly broader in the 2nd, 4th, 6th and 8th abdominal segments. On the head capsule, the transverse black stripes seen in the earlier instars are now broken into short and bold dash-like stripes. This stage takes about 3-4 days to complete with body length reaching up to 46mm. 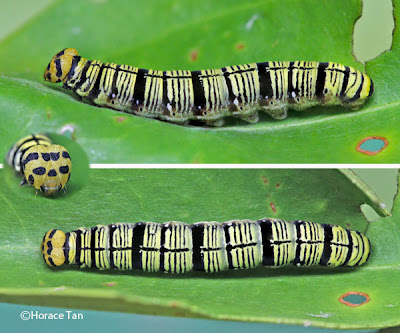 Two views of a 5th instar caterpillar, early in this stage, length: 30mm. 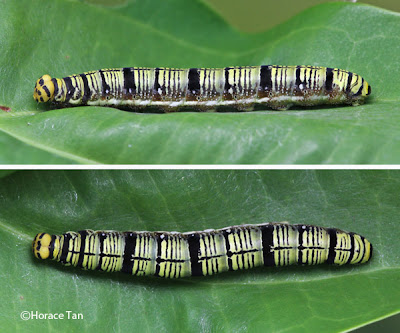 Two views of a 5th instar caterpillar, later in this stage, length: 43mm.

Towards the end of 5th instar, the body of the caterpillar gradually shrinks in length. The fully grown caterpillar ceases feeding and stations itself in a leaf shelter. During the early part of this pre-pupal stage, the caterpillar constructs a silk girdle across the dorsum of its anterior abdominal segments, and a short transverse silk band on the substrate near its posterior end. Both the dorsal point of the girdle and the transverse band are also secured by vertical/oblique threads to the inner wall of the shelter. 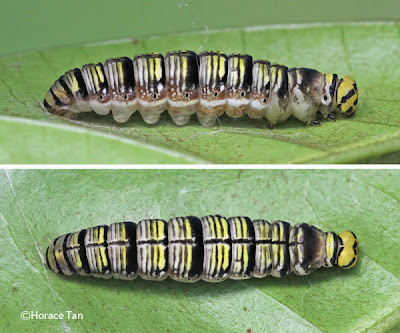 Two views of a pre-pupa of the Brown Awl.

After about 1 day of the pre-pupal phase, pupation takes place within the pupation shelter. The pupa secures itself with its cremaster attached to the transverse band. The pupa has a short thorax, a rather long abdomen and a short and pointed golden brown rostrum. Fresh after the pupation event, the body is pale golden brown to dark brown, but after 0.5 to 1 day, the body surface becomes mostly covered in a white substance. Length of pupae: 24-26mm.
A Brown Awl caterpillar turning into a pupa. Two views of a pupa of the Brown Awl at any early stage with white substance just appearing on the surface. 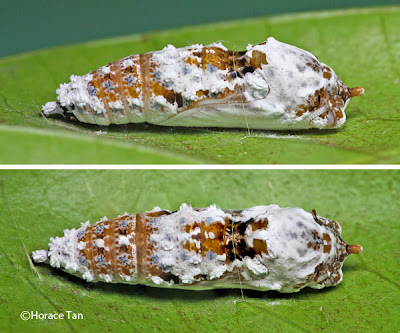 Two views of a pupa of the Brown Awl, after the white substance has fully formed on the surface.
After 7-8 days, the pupa becomes darkened in color signaling the imminent emergence of the adult. The next day the adult butterfly emerges from the mature pupa. 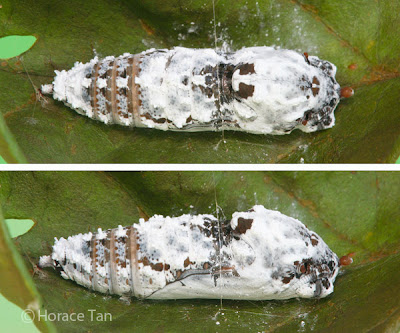 Two views of a mature pupa of the Brown Awl 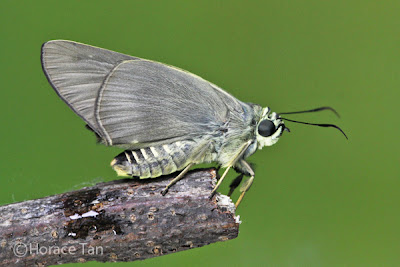