Once again, we're back to the month of August, the eighth month of the year that was named in honour of Emperor Gaius Julius Caesar Augustus, who is considered the 1st Emperor of the Roman Empire.  He ruled the Empire from 27BC to AD14.  In Singapore, August is the month of its National Day, where on 9 Aug 1965, it separated from the Federation of Malaysia and became and independent republic. 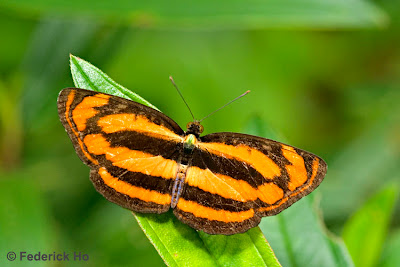 In 2011, multicultural Singapore, our Muslim friends celebrate Hari Raya Puasa (on 30 Aug)  whilst the Chinese community observe the Month of the Hungry Ghost, which ends on 28 Aug.  It's also a significant month in that, for the first time in the history of Singapore, the Presidential Elections feature a total of four candidates for the Presidency!  It will be an interesting polling day on 27 Aug 2011. 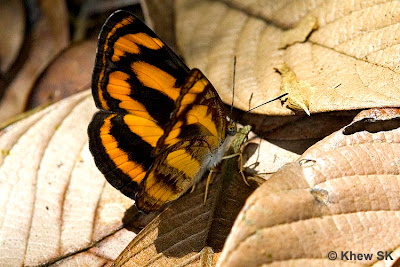 The birthstone for the month of August is the sardonyx, a variant of the stone onyx, where the coloured alternating bands in the stone are shades of reddish-orange.  Onyx is formed of bands of chalcedony in alternating colors. It is cryptocrystalline, consisting of fine intergrowths of the silica minerals quartz and moganite. Its bands are parallel to one another. 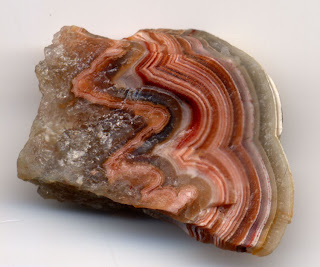 Wear a sardonyx or for thee,
No conjugal felicity;
The August-born without this stone,
`Tis said, must live unloved and lone.
- Gregorian Birthstone Poems 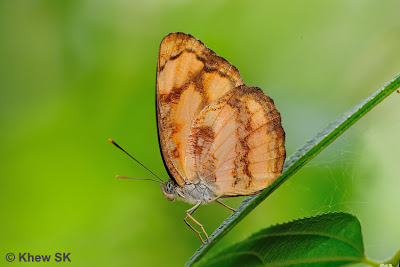 This month, we feature a small but irritatingly skittish butterfly (to us photographers), the Common Lascar.  The species is a forest-dependent species, and is usually found within the nature reserves of Singapore.  It is a relatively weak-flyer, but is skittish and quickly takes to the treetops if disturbed.  It has a distinctive flap-glide flight and usually stops to sunbathe on the tops of leaves at sunlit spots in the forested areas. 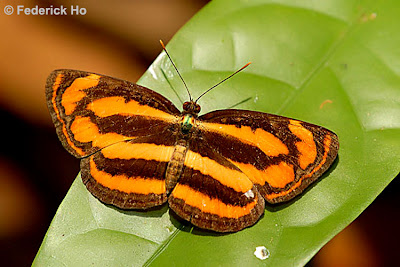 It is often found in the vicinity of its host plant, the Petai (Parkia speciosa) which grows wild in the forested nature reserves.  The females of the Common Lascar have often been observed flying near its host plant, trying to oviposit on the young leaves of the plant. 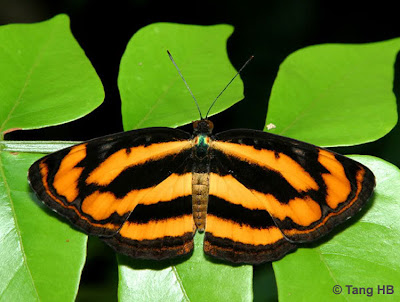 There are four lookalike Lascars extant in Singapore, and they are often difficult to identify when in flight.  The characteristics that separate the four species (of which two are in the genus Pantoporia and the other two in the genus Lasippa) generally occur in the forewing submarginal markings. 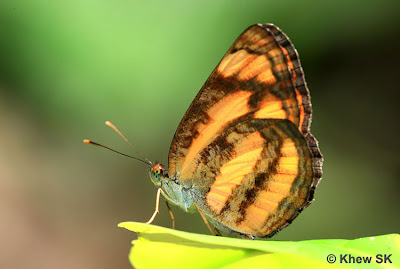 The Common Lascar features the typical alternate black-orange bands on the upperside of the wings.  However, unlike the other members of the lookalike Lascars, the Common Lascar is the only species that feature striated and marbled underside markings. The thick orange submarginal line on the upperside of the forewing also distinguishes it from the other similar looking Lascars. 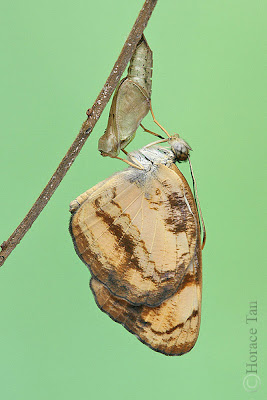 The species is relatively common, particularly in local areas within the nature reserves where there are young plantlets of its host plant growing in the vicinity.  It has also been observed to puddle at damp spots on the forest floor, but is more frequently observed fluttering amongst the shaded forest understory, stopping with its wings opened flat on the tops of leaves. 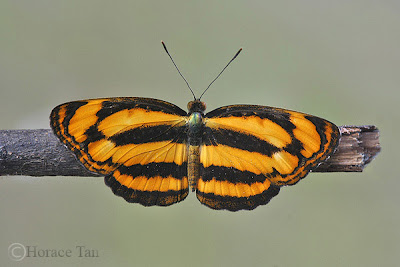