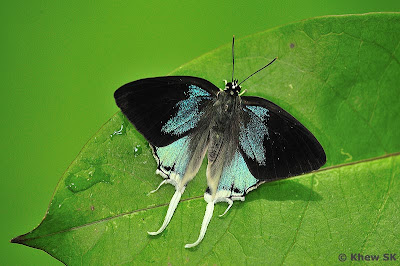 The month of May proved to be an interesting month for Singaporeans. Often described as a politically-apathetic bunch of people, the 2011 General Elections proved that Singaporeans have indeed matured politically. A colleague who is from another country said that it was quite amazing that the Singapore GE was so well organised, peaceful and efficient, unlike elections in his home country. 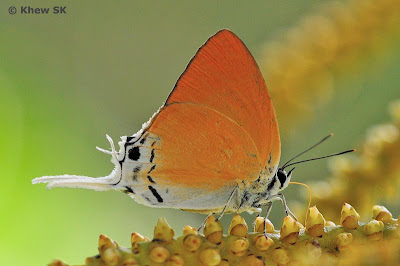 Indeed, as the dust settles down on the political battlefield and everyone goes back to their own lives, a few key messages left a lot of food for thought. The first is that of the electorate's resolve for an alternative voice in Parliament. Next is the increasing use of social media and the cyberspace to launch campaigns and communication amongst the net-savvy. This media is something of a phenomenon that both the ruling party and the alternative parties had not fully exploited, and it will be a platform on which future elections will be fought. That the alternative parties have secured 6 seats out of a total of 87 in Parliament is in itself a historical moment for Singapore politics. But for the ruling party, the Peoples Action Party, the results of the elections 2011 would be something that the incumbents of any other independent democratic country would die for... perhaps even literally! 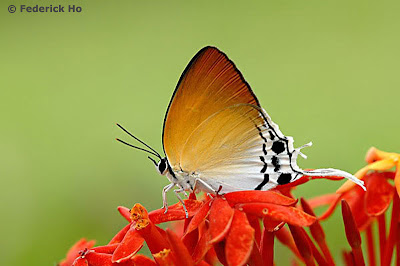 The month of May in Singapore has seen relatively decent weather, although there have been days of thundery showers that have kept butterfly shooters cooped up and moping at home. The month is traditionally associated with the gemstone Emerald. The stone is of the mineral beryl, and usually coloured green by trace deposits of chromium or vanadium.

Who first beholds the light of day
In spring's sweet flowery month of May
And wears an emerald all her life
Shall be a loved and happy wife.
-Gregorian Birthstone Poems 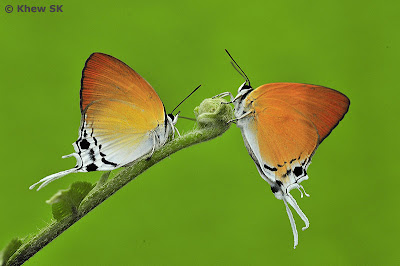 A pair of Green Imperials - male (right) and female (left)

For May 2011, we feature a little green gem of a butterfly, the Green Imperial (Manto hypoleuca terana). The species is one of the long-tailed Lycaenids of Singapore's butterfly fauna. It is a rare forest-dependent species that is not often observed, and probably frequent tree-tops rather than visiting lower level plants. 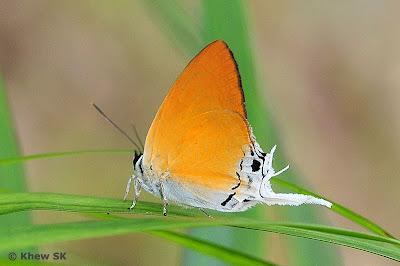 The male of the Green Imperial is a shining bluish-green at the wing bases of the forewings and on the hindwings, probably giving it its common English name with its emerald green appearance. The broad black apical area of the forewings contrasts strongly with the green. 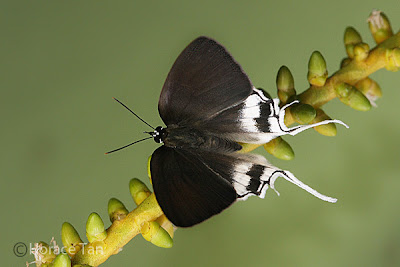 The female is a drab brown above with black and white markings on the tornal area of the hindwings. Both sexes feature a long pure white tail at vein 2 of the hindwing and a shorter stubby tail at the adjacent vein 3. 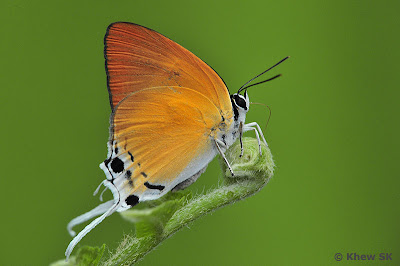 A male Green Imperial feeding on a young fern

The underside is dark orange and unmarked on the forewing, although the apical area of the forewing tends to appear darker in colour than the rest of the wings. The hindwing has black sub-marginal and marginal spot and stripes. The hindwing of the male is almost totally orange, whilst the female has a whitened dorsum. 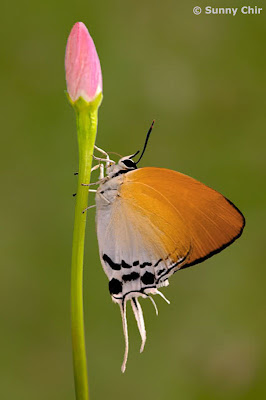 The Green Imperial flies rapidly and is usually quite skittish. It also has a habit of perching on the underside of a leaf at times. It has been successfully bred on the parasitic plant, Macrosolen cochinchinensis that is not uncommonly found on many mature trees. 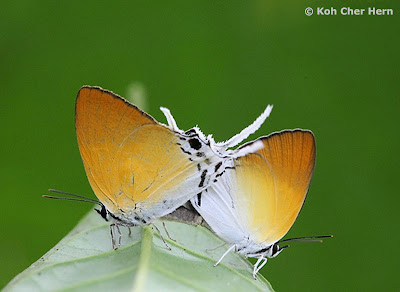 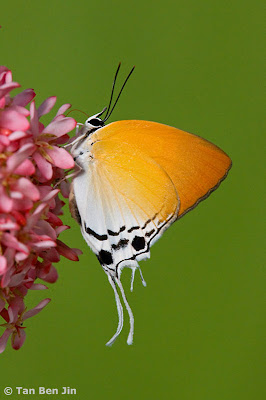 Very good post, loved the photos! This butterfly uses the same host plant family as our Great Purple Hairstreak. And it is pretty much the same size and shape.

Thanks, Randy. Amazing that you have this same mistletoe host plant over there in the US too!