Return of a Magnificent Giant 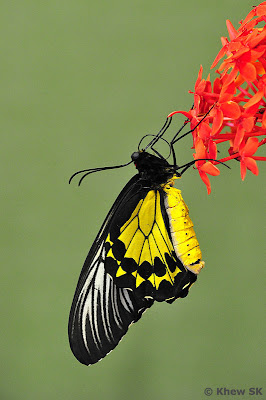 It was after a fruitless outing at Telok Blangah Hills Park on a Sunday morning when I decided to pay an 'old friend' a visit. Having last been to the Alexandra Hospital Butterfly Trail some months back, I thought that I'd go check out the trail to see if there were any more Black Roses flying around the area. 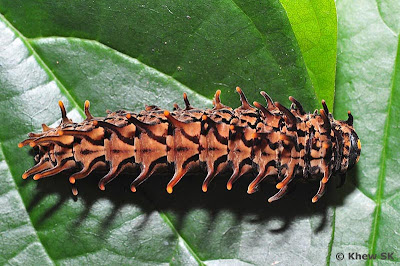 When I reached the trail, I could see some butterfly activity, but the weather was cloudy, and the trail was quieter than expected. A couple of macro photographers were shooting spiders and other critters. The number of butterflies was way below the heydays of the AH Butterfly Trail, where the place was busy with fluttering butterflies. I noted that some of the landscaping material had been replaced with plants that were not too attractive for butterflies. Their favourite Lantana plants were gone, as were the Heliotropium indicum. The attendant and active Leopards were also missing, as their caterpillar host plant, Salix babylonica had been removed. 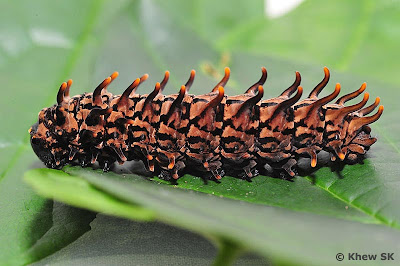 I made a mental note to talk to the person in charge of the landscaping at AH to try to bring back the former glory of the trail, as far as butterflies are concerned. Alexandra Hospital is now run and managed by JurongHealth, and is the holding hospital whilst the new Ng Teng Fong Hospital is being constructed at Jurong. The new 700-bed acute care is designed with good integration of the greenery into the building fabric and features a "window for every patient" as a cutting edge ward design that departs from the conventional rectilinear wards. The hospital is scheduled for completion in 2014. CPG Consultants, the firm that I work for, are the architects for the project :) On days where there is very little butterfly activity, I usually check out the various host plants at the trail for the early stages of butterflies. There have been times in the past where we stumbled on the caterpillars and pupae of many species. As I walked past the Aristolochia acuminata trellises, I noted that the plants were quite lush, indicating that there was low caterpillar activity. However, I noticed a few early instar and one large late instar Common Birdwing caterpillars on one of the trellises. 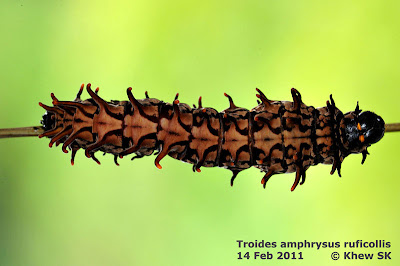 As I approached the other trellis, I noticed another medium-sized caterpillar on the underside of one of the large leaves of the host plant. It had curved reddish spines but was strangely speckled. Initially, I thought that it was a caterpillar of the Common Rose, but my instincts told me that this could be something different. 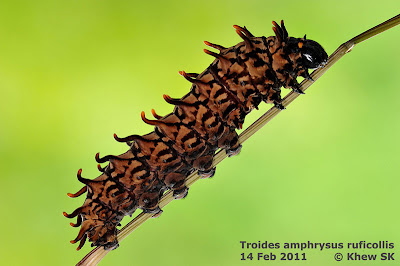 I noticed that the patterns on the caterpillar was indeed different from the two local Aristolochia feeding species that I was familiar with. It did not have the usual whitish-yellow saddle mark that the caterpillars of the Common Rose and Common Birdwing have. 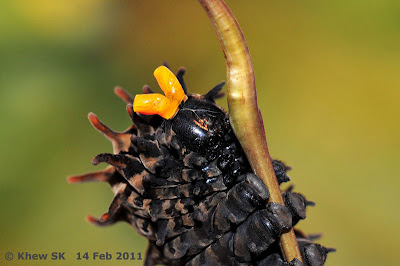 A partially everted osmeterium of the Malayan Birdwing caterpillar

After checking my reference books and also online resources, the other species of Troides that matched the caterpillar that I found were either T. aeacus or T. amphrysus. A few references later, I managed to narrow it down to T. amphrysus as it was the only species between the two to have A. acuminata as one of its host plants.
"The earlier instars larvae usually have a rather plump appearance, constantly lack the pale "saddle 'and have dorsal tubercles that are black with orange to orange-red spines or 'thorns'. Young larvae are black with dark and pale, spineless tubercles. Those dorsally on the abdominal segment nos. 2, 3, 6 and 7 are black, and the remainder a bright orange. The penultimate instar larvae assume the 'mature' colouration and are almost coffee-brown with indistinct markings. There is no 'saddle-mark'.... Large larvae will kill smaller ones when they are present on the same host plant but in the other instances two or more equally large, grown larvae have been observed sharing the plant so that it seems the cannibalistic behaviour may be response to crowding."
(From: A Monograph of the Birdwing Butterflies, volume 2 - The genera Trogonoptera, Ripponia and Troides by J. Haugum, A. M. Low & D. Wilson.) 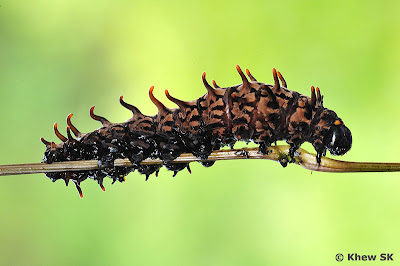 It was an exciting find, because thus far, the majority of our new discoveries or re-discoveries of butterfly species in Singapore had been through the observation of the adult butterflies. With the exception of the Lycaenidae and Hesperiidae that were bred successfully by ButterflyCircle members to validate the discovery/re-discovery of a species, all of the larger butterflies of the other families added to the Singapore Checklist had been through adult individuals spotted in the field.
Now I had the possibility of a re-discovery, but in the form of a caterpillar! But as I could not be absolutely sure of the identity of the adult butterfly, I continued to feed the caterpillar and watched and waited. The 3rd instar caterpillar moulted after a couple of days, and continued to eat voraciously. 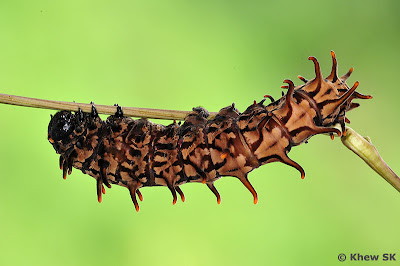 Fortunately, I had cultivated a large pot of Aristolochia in my garden, and hence had adequate supply of fresh leaves for the hungry caterpillar. Almost a week later, it moulted to its 5th and final instar. By this time, the caterpillar had grown to about 90mm long, and was large and heavy. It fed intermittently, but was most active at night. 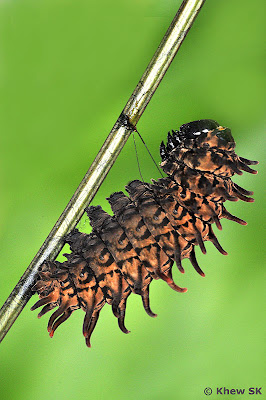 The Malayan Birdwing caterpillar in its pre-pupation pose. Note the black girdle attached to the stem of the host plant

About two and a half weeks after I discovered the caterpillar, it settled down on a strong stem of the host plant and curled up in its pre-pupation pose. It stayed in that position for over 36 hours and then pupated in the early hours of the morning. The large pupa had the usual Papilionidae girdle and was positioned upright. 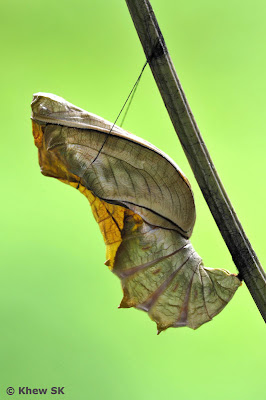 After a few days I checked on the pupa, and it wriggled as it sensed something was near. The normal pupation period for many of the Troides spp can range from 12 days to as long as 20 days, so I waited in anticipation for the eclosion, with the hope that the caterpillar was not parasited! I checked on the pupa from time to time over the week or so, and each time I moved its perch, it wriggled violently making 'shuffling' sounds that was clearly audible. It wasn't exactly a squeak as reported in some literature, but definitely loud enough to scare a curious predator off.
"The pupa is usually prominently marked with grey to greenish or brownish green lines... Male pupae are around 5.2 cm long and female pupae measure about 5.8 cm in length. Pupae are capable of sound-production, a distinctly hissing sound is heard when they are disturbed. It is to prevent them from parasitized. The duration of pupal stage lasts about 3 to 4 weeks from Sumatra breeding results. Dupont mentioned that a duration of 15 to 16 days, whilst a Malay Peninsular record mentions exactly 17 days."
(From: A Monograph of the Birdwing Butterflies, volume 2 - The genera Trogonoptera, Ripponia and Troides by J. Haugum, A. M. Low & D. Wilson.) 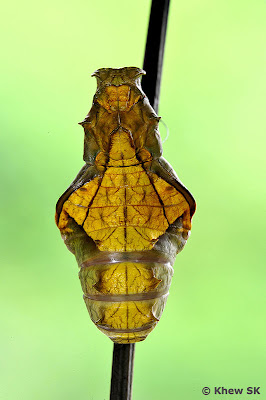 After the 19th day from its pupation, the pupal shell turned semi-transparent, and I could see the pupa darken with the black forewings of the butterfly. Unfortunately, it was a weekday and I headed off to work, frustrated that I could not record its eclosion. When I returned that evening, a magnificent female Malayan Birdwing (Troides amphrysus ruficollis) greeted me. 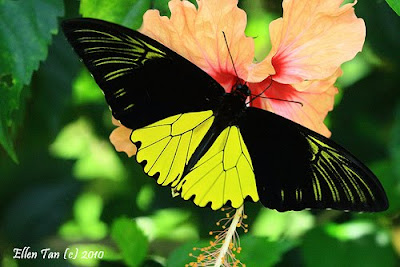 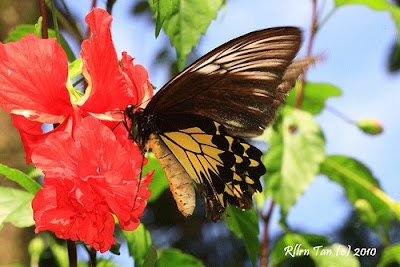 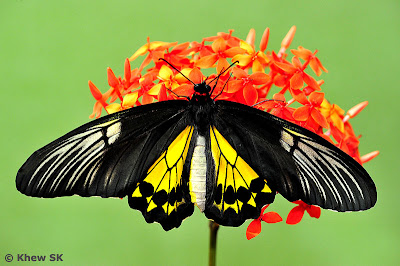 It was the final confirmation that I needed of the existence of this species in Singapore, and we record it as the re-discovery of this species in Singapore and #301 on the Singapore Checklist. Tracing the early stages of this caterpillar, I estimated that a female Malayan Birdwing visited the Aristolochia trellis at Alexandra Hospital Butterfly Trail around late January or early February, perhaps around the Lunar New Year period, and oviposited on the host plant. I was just fortunate to have stumbled upon its caterpillar and bred it successfully. 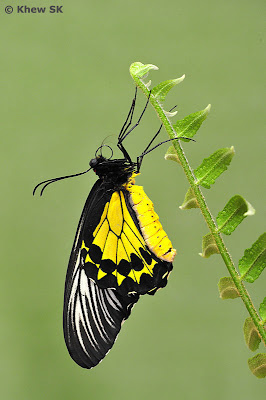 In one of his technical papers in the Malayan Nature Journal, R Morrell, one of the early authors and butterfly specialists in Malaysia and Singapore, commented that "the Malayan Birdwing was found at the Singapore Botanic Gardens from time to time during the NorthEast monsoon months of the year. He surmised that they could have crossed over from Johor" 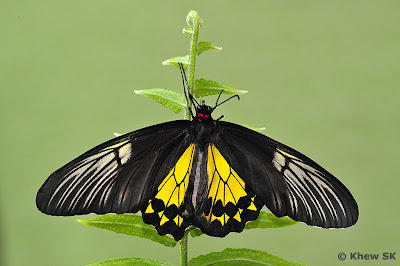 So, whichever way the Malayan Birdwing may have come over to Singapore from Malaysia, we hope that the species will return to stay and be part of the butterfly fauna of Singapore once more.

Text by Khew SK ; Photos by Khew SK & Ellen Tan. Special thanks to ButterflyCircle member Teo TP for highlighting the references of the early stages of the Malayan Birdwing, and Keith Wolfe for confirming the ID of the caterpillar

Posted by Commander at 9:00 PM

Saw one now at the trees at the big playground hillcrest/Watten.. Only second time in 6 years I have seen it!