The Return of the Admiral 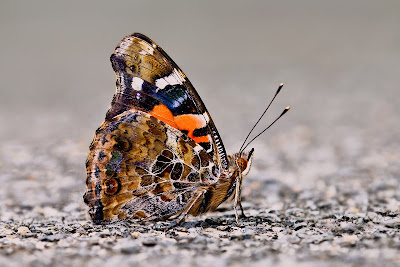 Some time back in Dec 2008, the Indian Red Admiral (Vanessa indica) was spotted at an urban park in Singapore (see previous blog article). Back then, it was the first time anyone had spotted this species as far south as Singapore. It may have been a once-off occurrence, where a migrating individual could have have been blown off course by the strong North-East monsoons and it ended up taking refuge in Singapore.

Then recently, on 8 Jan 2011, ButterflyCircle's eagle-eyed Sunny Chir again spotted this species puddling at the same urban park! Most amazingly, it was flying around in the exactly the same vicinity as the individual spotted over two years ago! 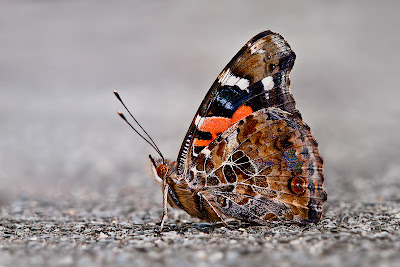 Is there some DNA imprinted code that makes this particular species come back again and again to the same location in Singapore? Was it part of a fixed migratory route or just pure coincidence? Did it return in 2009 and 2010, but just that no one spotted it? This particular individual came rather early in the year, or perhaps it was one of several of the same species that remained since the latter part of 2010. 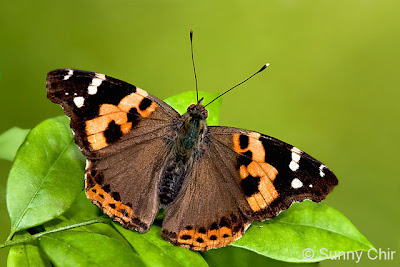 One of those intriguing mysteries in nature. This visiting Indian Red Admiral shot in 2011 appears too pristine to have suffered the battering winds and wear and tear of a long migratory flight. Perhaps the species has already established a colony in Singapore, and breeding new offspring somewhere, as the host plant is known to be some species of nettle (family : Urticaceae) 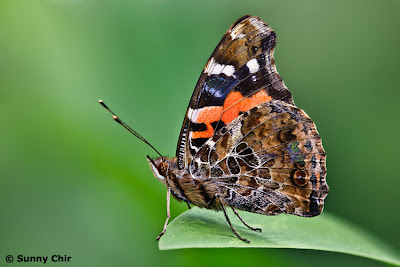 Who knows for sure? We just need to be continuously observant, and with a good dose of luck, like Sunny Chir seems to have, and we may just get our answer!
Text by Khew SK : Photos by Sunny Chir & James Chia
Posted by Commander at 9:00 PM