Life History of the Common Palmfly 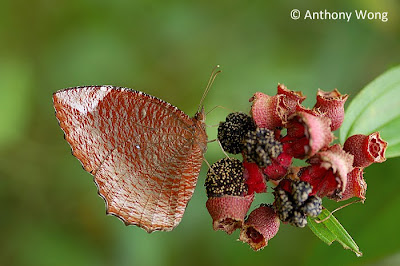 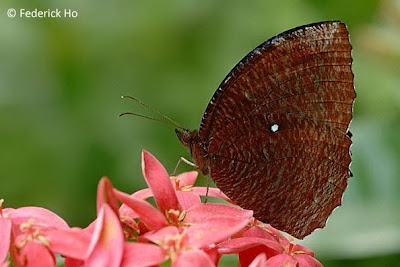 A Common Palmfly perching on a cluster of flowers.

Physical Description of Adult Butterfly:
Termens of both wings are prominently scalloped. The hindwing is more strongly toothed at vein 4. Above, the wings are dark brown. On the forewing, there is a series of pale bluish submarginal spots, becoming larger in subapical area and then smaller again along the costal border. In the male, the subapical spots are closer to the apex than in the female. The hindwing is reddish brown with rather pale postdiscal spots. Underneath, the wings are strongly mottled brown. At the apex of the forewing, there is a `thumb-print' (a triangular area in a lighter shade) of varying prominence among specimens. A white spot can be found in the centre of the costa on the hindwing, but this can be absent or inconspicuous in certain specimens. 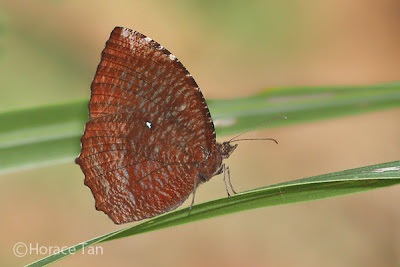 A Common Palmfly perching on a blade of palm frond. 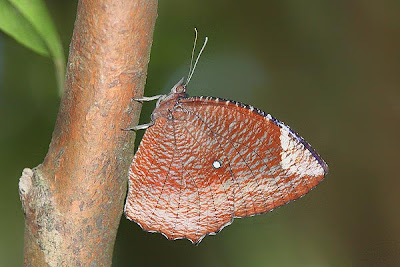 A Common Palmfly found napping on the stem of a tree.

Field Observations of Butterfly Behaviour: The Common Palmfly is the most widespread species of its genus in the Indo-Australian region. Locally, it is also a rather common species with widespread occurrence across multiple habitats. Typically the adults are shade-loving, and usually sighted flying along the edge of vegetated area and in the vicinity of a clump of palm trees. The adults have the habit of puddling and visiting flowers for mineral and energy intakes. 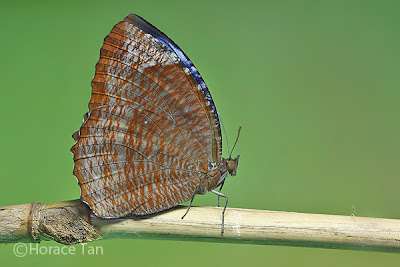 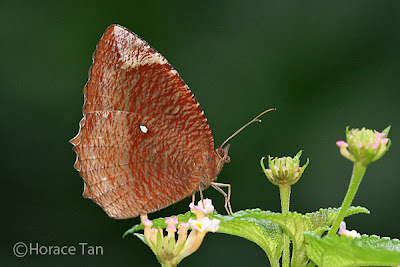 Early Stages:
The early stages of the Common Palmfly is polyphagous and feed on the leaves of a number of host plants in the Arecaceae (Palmae) family. Thus far, four of them are fully identified and listed above. 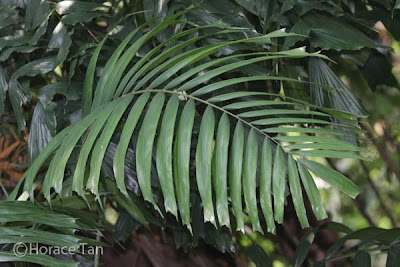 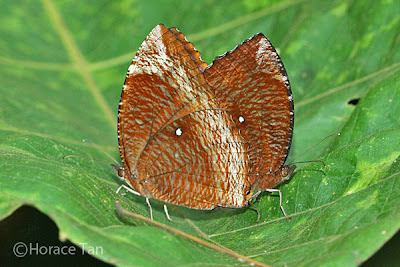 A mating pair of the Common Palmfly (female on the left).


The eggs of the Common Palmfly are laid singly on a leaf blade of the host palm tree, typically on the underside. Each egg is almost spherical with a slightly protruding top (diameter: 1.3-1.4mm). The egg is initially white when freshly hatched but turns yellow on the following day. The surface is faintly and irregularly reticulated. 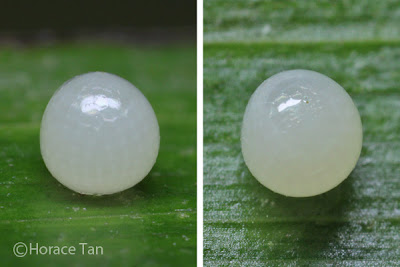 Two views of an egg of the Common Palmfly. 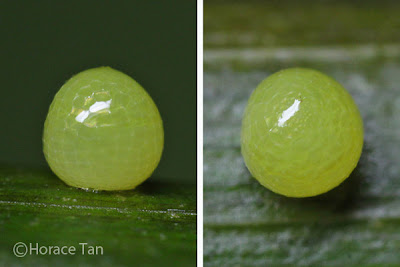 Two views of a one-day old egg of the Common Palmfly. 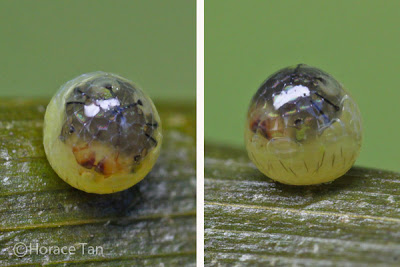 Two views of a mature egg of the Common Palmfly. Note the clearly visible head and body setae of the caterpillar.


The egg takes about 4 days to hatch. The young caterpillar emerges by eating away part of the egg shell. The rest of the egg shell becomes the first meal for the newly hatched, which has a length of about 3mm. Its cylindrical body is pale yellowish. The large head capsule is black in color and has three pairs of prominent protuberances lining the perimeter with the apical pair being the largest and longest. Each protuberance ends with a thick setae bearing a transparent droplet at its tip. Rows of fine setae, also bearing terminal droplets, run along the length of the body dorso-laterally and laterally. A pair of long pale-yellow processes occur at the posterior end of the body, each of which ends with a drop-bearing black setae. 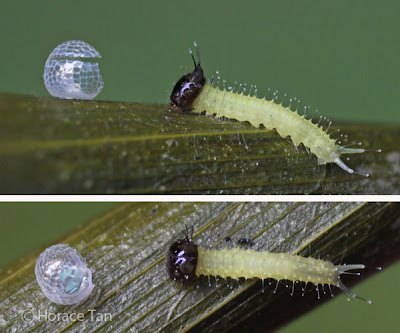 
Once the newly hatched moves on to feed on the young leaves, its body starts to take on a green undertone. Several contrasting bands, yellow in color and of varying widths, adorn the body surface dorsally and laterally. This instar lasts 3 days with the length reaching up to 6mm. 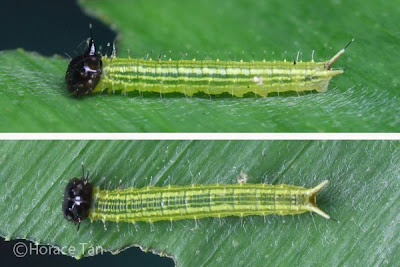 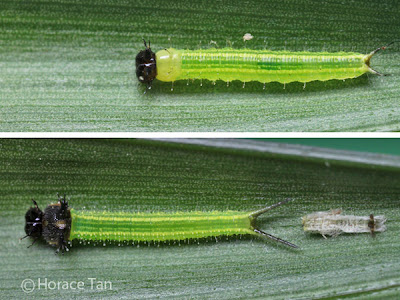 A Common Palmfly caterpillar just before its moult to the 2nd instar (top), and soon after the moult (bottom). 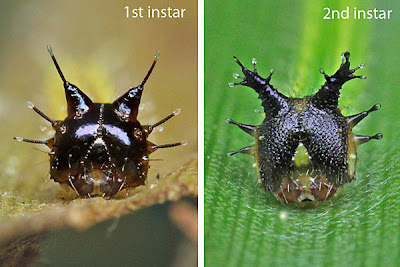 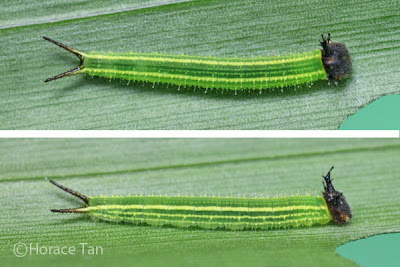 
The 3rd instar caterpillar is similar in appearance to the 2nd instar caterpillar with the only obvious change being in the appearance of the head capsule. Now the ground colour of the head capsule is yellow except for two lateral reddish brown patches running vertically from the apical pair of protuberances, which are also reddish brown in color. The other protuberances turn yellowish with their short terminal setae still brown to black in color. This instar takes about 4 days to complete with body length reaching about 16-17mm. 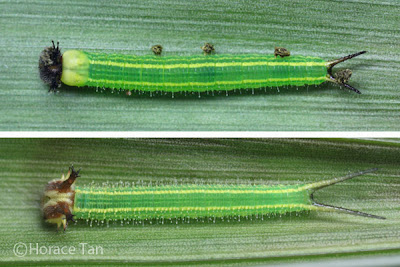 A Common Palmfly caterpillar just before its moult to the 3rd instar (top), and soon after the moult (bottom). 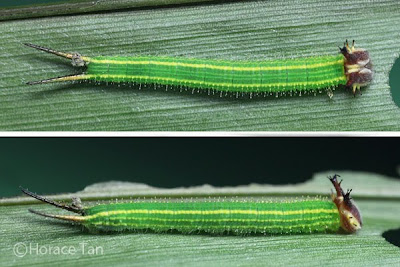 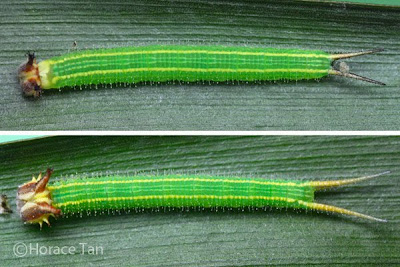 A Common Palmfly caterpillar just before its moult to the 4th instar (top), and soon after the moult (bottom). 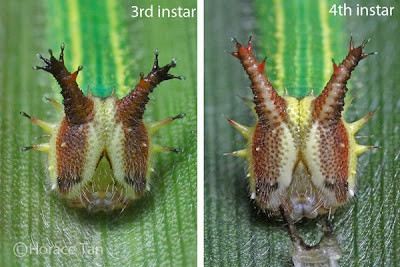 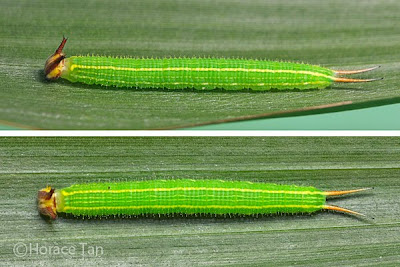 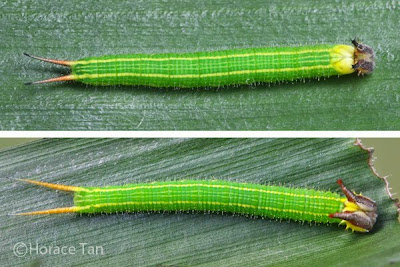 A Common Palmfly caterpillar just before its moult to the 5th instar (top), and soon after the moult (bottom). 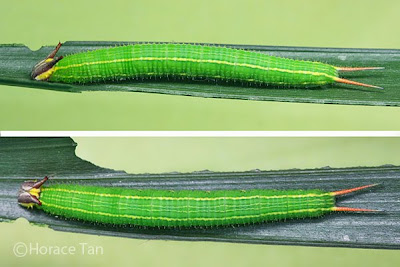 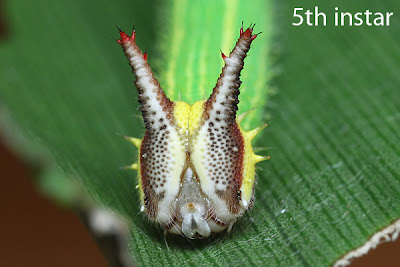 
The 5th instar lasts for 3.5-4 days, and the body length reaches up to 40mm. On the last day, the caterpillar ceases feeding, its body becomes shortened but with essentially no change in body color. It wanders around in search of a pupation site. Typically it comes to a halt on the underside of leaf blade where the caterpillar spins a silk pad to which it attaches its claspers and then rests in a head-down posture. 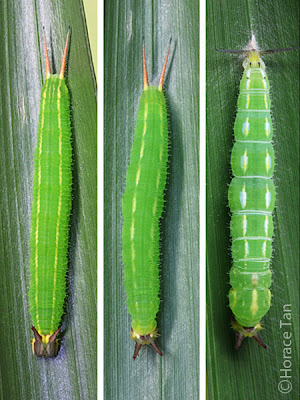 The pupation event of a Common Palmfly caterpillar.


Pupation takes place 1 day after the caterpillar assumes the haed-down posture. The green pupa has yellowish strips running on the dorsum of the thorax, dorso-laterally and laterally on the abdomen and the leading edges of the wing case. These yellow strips are outlined in pink. The pupa also has a pair of short cephalic horns, and its dorsum is angled at the thorax. Length of pupae: 22-23mm. 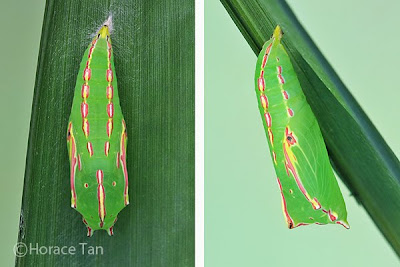 Two views of a pupa of the Common Palmfly. 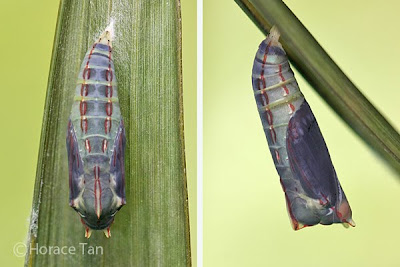 Two views of a mature pupa of the Common Palmfly.
After about 6-6.5 days of development, the pupal skin turns translucent as the development within the pupal case comes to an end. The pupa is mostly black at this point. The following day, the adult butterfly emerges from the pupal case. It then perches on the pupal case or nearby to expand and dry its wings before taking its first flight. 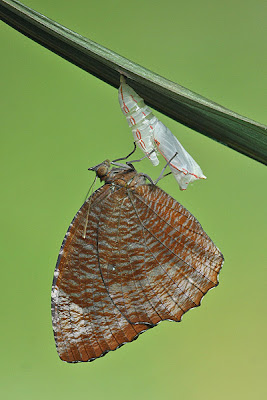 A newly eclosed Common Palmfly drying its wings on its pupal case. 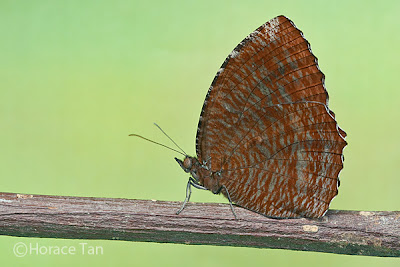 Thanks for kind words, Joseph. :)

I'm in love with your Blog..I live in Indonesia and most of those butterflies are also found in Indonesia..so, thank you for sharing this info... ^_^

Great documentation. I saw few of these in my palm plants and with your blog's help now I identified them. Thanks a lot.

Superb document.. I live in srilanka and those kind of butterfly species can be found in srilanka..Many Thanks for creator of this document

I have this at my Home....found on my areca palm tree