Butterfly of the Month - October 2010 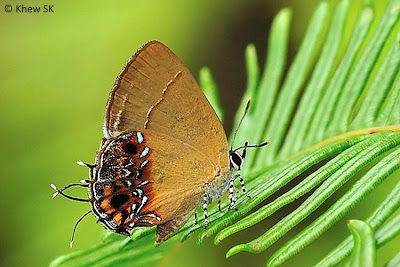 The month of October heralds autumn in the northern hemisphere and spring in the southern hemisphere. The month was originally the eighth month of the ten-month Roman Calendar, but later became the tenth month of the Gregorian calendar which features 12 months in a year. However it retained its name as "Octo" means "eight". 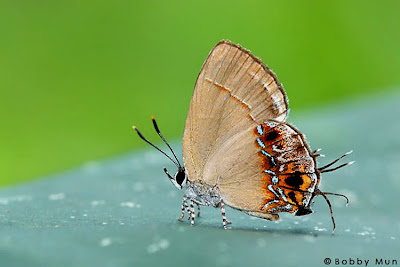 October was an exciting month for butterflies in Singapore, where the most comprehensive Field Guide to the Butterflies of Singapore to date was launched on the 10th of the month. 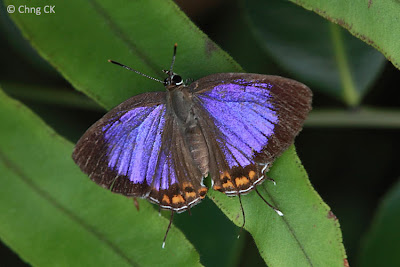 However, it was also a month when the dreaded haze, caused by the burning of forests in neighbouring Indonesia, returned. The last two serious haze periods occurred in 1997 and 2003. This time around, the hot spots returned and the PSI index of the National Environment Agency crossed the 100-mark for the first time in several years, when the 3-hour PSI index at 5pm hit 102 on 21 Oct 2010. 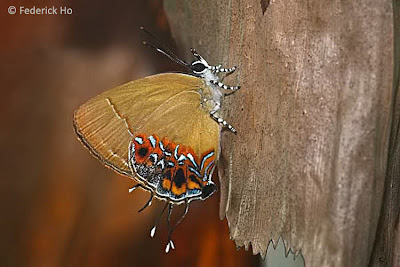 The last time a prolonged haze hit Singapore in 1997, I recall that the butterfly population and activity dropped significantly. However, this time around, it appears that the rains helped and the weekend PSI dropped back to the healthy range. The butterflies didn't seem worse for wear this time around, and hopefully, the winds and rains will keep the haze under control. 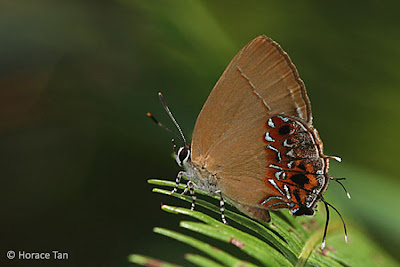 This month, we feature the very pretty Lycaenid, Semanga superba deliciosa. This dimunitive butterfly is fast-flying and skittish, but occasionally can be found feeding or perched to rest, sometimes with wings opened. 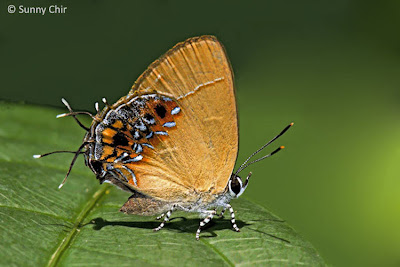 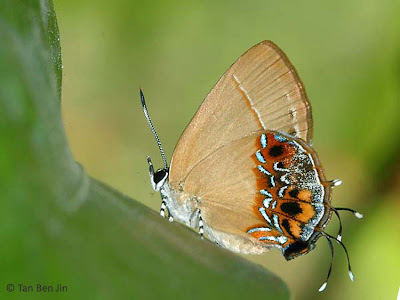 We have not christened a common English name for it yet, but its scientific name is something that is easily remembered and definitely not a tongue-twister like many others. 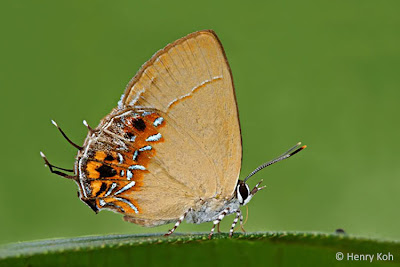 This diminutive Lycaenid has an interesting scientific name, almost declaring it a “superbly delicious” butterfly! This species is the only one of its genus found in Malaysia and Singapore. Semanga superba deliciosa is a fast flying butterfly and frequents open areas on the fringes of the nature reserves as well as urban parks and gardens. It has been known to feed on a number of host plants and are associated with ants during its early stages. Its early stages has been recorded here. 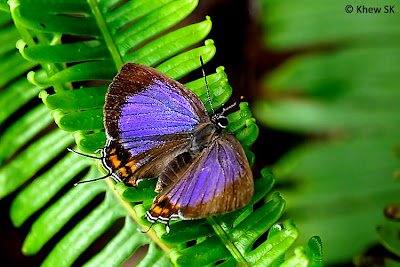 The male Semanga superba deliciosa is a lustrous purple above with a black border on the forewing and an orange-red distal border on the hindwing. The female is bluer than the male but with a wider forewing border. The buff brown underside has a narrow reddish brown post discal line, and the tornal area of the hindwing has an attractive array of red and black spots with metallic blue and green zigzagged lines. 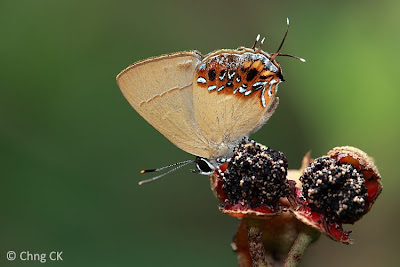 The male has long white-tipped filamentous tails at veins 2 and 3 of the hindwing, whilst the female has an extra tail at vein 4, giving it a total of six tails. 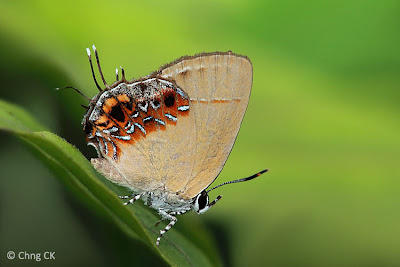 The butterfly occasionally stops to rest whilst sliding its hindwings up and down as if to accentuate the fact that the false head and antennae are active. This is to fool predators into attacking the 'wrong' side of the butterfly. 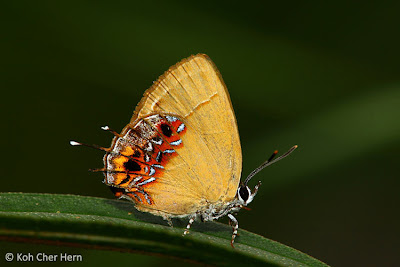 Though often observed singly, the species is just moderately rare, and from the number of members of ButterflyCircle that have been able to shoot it, it has been encountered with regularity in the various parks and gardens in Singapore. 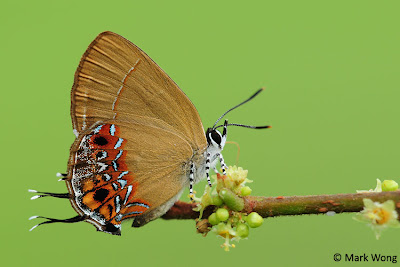 Really sweet little hairstreak as we like to call them here in the US. Hope the air clears soon there!

Thanks for visiting, Randy. Yes, they are also referred to as Hairstreaks here, but less often used, I guess.

The hazy skies seem to have cleared somewhat, thanks to heavy rain and a change in the wind direction. But the forest burning practice appear to be a thing that happens once too often. Over in your part of the world, I'm sure it'll be classified as a criminal act!

I am an editor at asia! (www.theasiamag.com), which is an online magazine that publishes good, interesting writing from bloggers all over the region.

We would very much like to feature this blog post of yours in our magazine, and am wondering if we could have your permission to do so.