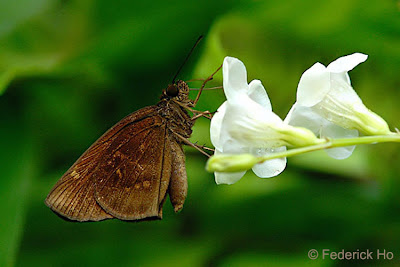 The family Hesperiidae (or commonly known as Skippers) feature rather unattractive butterflies. They are fast flying, with big eyes and many of them perch with their wings opened in a unique fashion, known only to the Hesperiidae - with their forewings held out at a 45 deg angle, whilst the hindwings are opened flat. 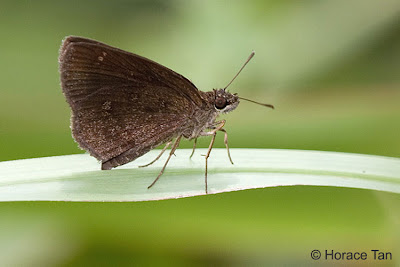 A shot of the Forest Hopper taken in Singapore

Many skippers are brown, unmarked and not typical of what enthusiasts, hobbyists and nature photographers would find particularly beautiful in a butterfly. Hence it is not surprising that many of these ubiquitous butterflies go about their daily lives, flitting amongst flowers in the early morning hours and later hours of the day largely unnoticed. 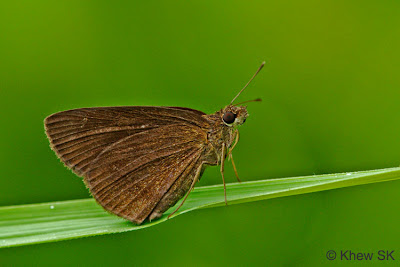 A Forest Hopper perches on a blade of grass

Of particular interest would be the many lookalikes which are difficult to identify with a high level of confidence from just field shots. To add to this difficulty, the large variations in the physical characteristics like their hyaline spots, markings and colours in both the males and females make it extremely challenging to distinguish between certain species without examining them scientifically - i.e. dead in a collection or via dissection of the genitalia. 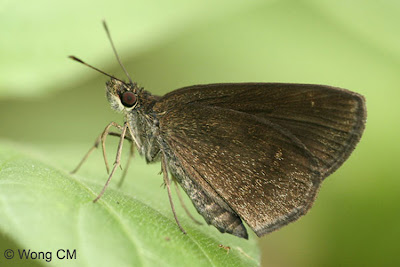 Another Forest Hopper on a leaf

Early in the compilation of the Butterflies of Singapore checklist, I had inadvertently classified a predominantly brown and unattractive skipper as the Coon (Psolos fuligo fuligo). For a long time, we had assumed that this was the species flying around the grasslands in Singapore.
Recently, one of ButterflyCircle members, Dr S. Kalesh, who hails from Trivandrum (or Thiruvananthapuram) in India, and who is a specialist in Hesperiidae, corrected this mistake. The Singapore Checklist has been updated accordingly, as after examining the repository of photographs and also voucher specimens amongst ButterflyCircle members and my own collection, the Coon (Psolos fuligo fuligo) is unfortunately no longer extant in the Singapore environment. Although it is listed in the Checklists of Butterflies of the Malay Peninsula (C&P4), there has be no reliable evidence that this species still exists in Singapore and therefore removed from the Checklist until such time any evidence of its presence can be validated. 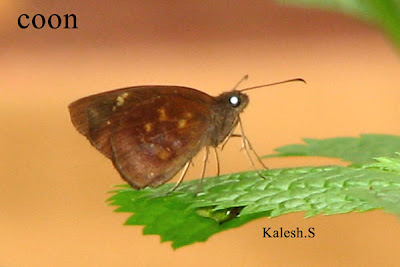 A shot of the Coon taken in India

The butterfly that had earlier been mis-identified as the Coon, has now been confirmed to be the Forest Hopper (Astictopterus jama jama) and reinstated to the Singapore Checklist. This predominantly brown skipper is described as "above and below the butterfly is dark brown and is usually unmarked although there may be two or three white hyaline subapical dots on the forewing. 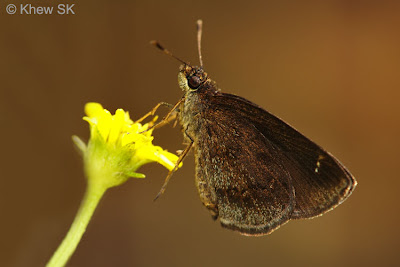 A Forest Hopper feeds on a yellow flower

In C&P4, page 351, the authors continued to mention that "The unicolourous underside and porrect palpi differentiate this species from the superficially similar Psolos fuligo (Coon)". The Coon, on the other hand, is described to have a few small and rather obscure ferruginous spots on the forewing and hindwing.
Dr S Kalesh further added that, 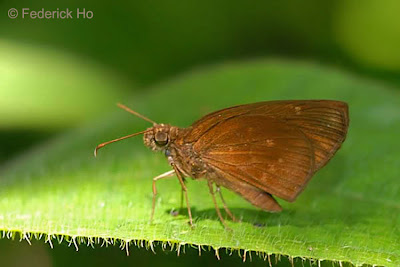 Note the 'hunchbacked' appearance of the Coon and also the obscure spots
In the Coon : The forewing tips diverge from each other and the wings are more produced in coon. Underside hue is brown with a violetish tinge with some pale brown areas. The forewings also curve in a convex manner, giving the butterfly a "hunchbacked" look. 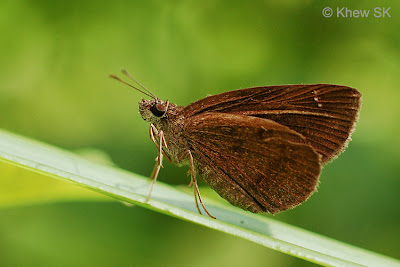 The unicolourous underside of the Forest Hopper and the three subapical hyaline spots on the forewing
In the Forest Hopper : The underside is blackish brown with grey scales occationally also with 3 apical spots and the wingtips dont diverge from each other. 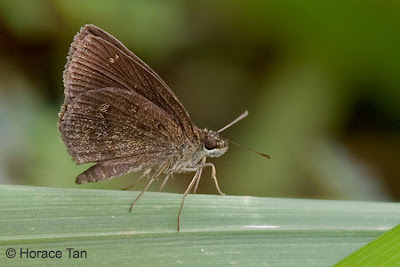 Another Forest Hopper perched on a blade of grass
The shots in this blog article show the differences between the Coon and the Forest Hopper. The other species that are extant in Singapore and that may be confused with these two species would be the Chocolate Demon (Ancistroides nigrita maura) and the all-brown male of the rare skipper Quedara monteithii monteithii.
Text by Khew SK ; Photos by Federick Ho, Dr S Kalesh, Khew SK, Horace Tan & Wong CM
Special thanks to Dr S Kalesh. His blog : The Skippers of Kerala
Posted by Commander at 9:35 PM