Butterfly of the Month - September 2010 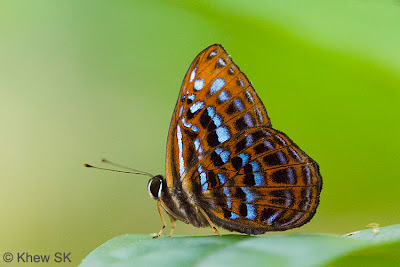 As we cross the threshold into the ninth month of 2010, most Asians are familiar with the Month of Ramadan where Muslims observe a full month of fasting. Hari Raya Aidil Fitri is now over, falling on Friday 10 Sep 2010. In Singapore's multi-racial society, where one colourful festival is celebrated and ends, another starts - the Mid-Autumn festival celebrated by the Chinese community. It's a festival where Chinese family members and friends will gather to admire the bright mid-autumn harvest moon, and eat moon cakes and pomelos under the moon together. 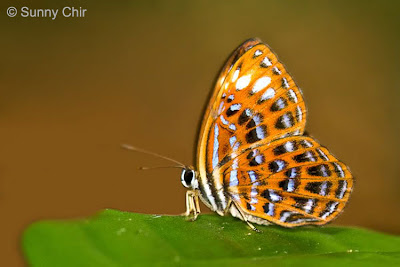 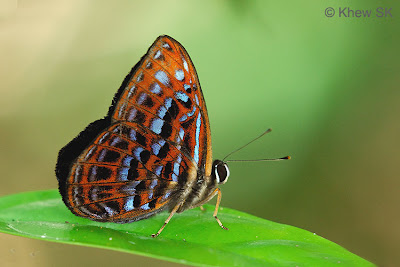 This month, we feature a butterfly from the family Riodinidae. The Riodinids are often referred to as "Metalmarks". Many species of this family feature attractively coloured metallic markings on their wings. The Riodinids are shade-loving butterflies, preferring to remain under the canopy of tall trees in forested areas. They have a habit of a hopping flight, stopping and then twisting and turning with half opened wings on the upper surfaces of leaves. 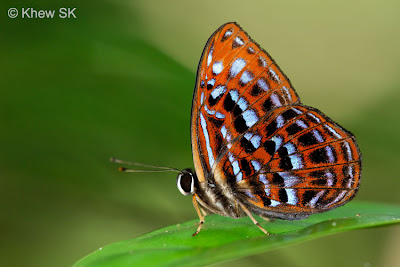 Our feature butterfly, the Lesser Harlequin, is a relatively small butterfly with a wingspan of about 35-45mm. This species behaves like the typical Riodinid, frequenting the heavily-shaded understorey habitats of Singapore's nature reserves and forested areas. 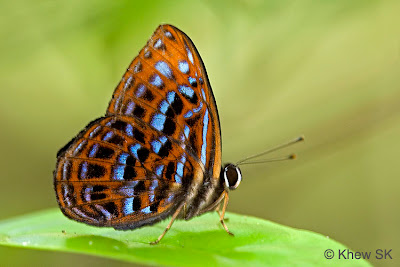 It flies around with a short hopping flight, and is quite skittish. At times, after a bit of flying around, the butterfly can stand still and 'sleep', staying motionless for long periods unless disturbed. But once alarmed, the Lesser Harlequin can take off to the treetops in a capable fashion. When seen in a particular location, the same butterfly can be observed to stay in the vicinity for a few days. 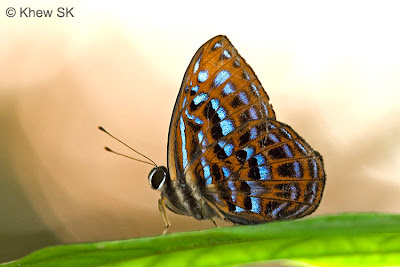 The Lesser Harlequin is reddish brown with blue-edged black spots on the underside of its wings. The iridescent metallic blue scales explain why the butterflies of this family are called Metalmarks. 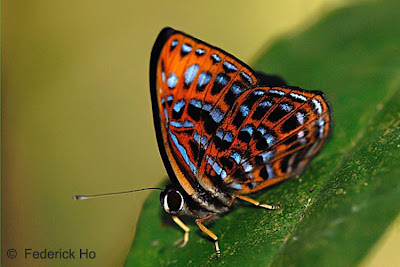 The male Lesser Harlequin is all black on the upper surfaces of its wings. It has a stronger flight than the female but has only two pairs of legs that are developed for walking. The forelegs in the male are undeveloped and brush-like. 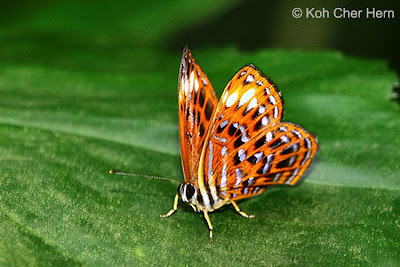 The female Lesser Harlequin has her upper wing surfaces marked like the underside. However, she has all three pairs of legs fully developed for walking. The eyes in both sexes are jet-black and featureless. 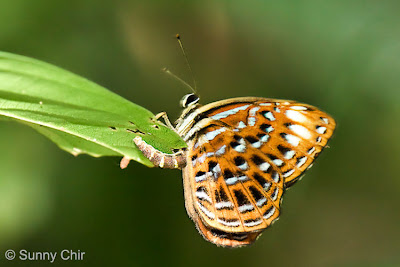 The species is rare in Singapore, with infrequent observations of individuals in the forests after long intervals. A female was recently observed ovipositing and the host plant is known but not yet reliably identified. 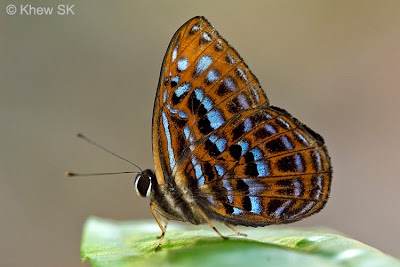 Like its close relative, the Harlequin, little is known about its preferred habitat, its survival rate, or why it appears in certain areas and not others. Further studies and observations are needed to help conserve this species and to ensure its sustainability and existence amongst Singapore's butterfly fauna in the years to come.

Pretty butterfly! All Riodinids are so beautiful!