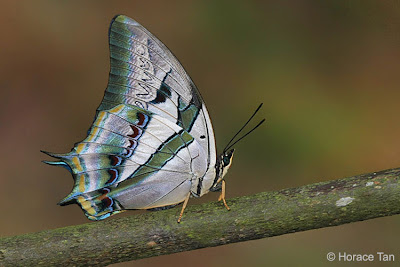 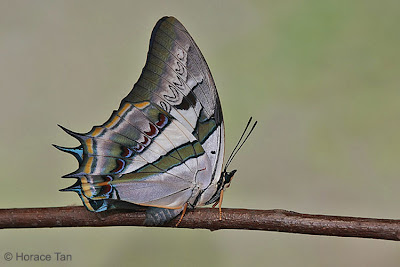 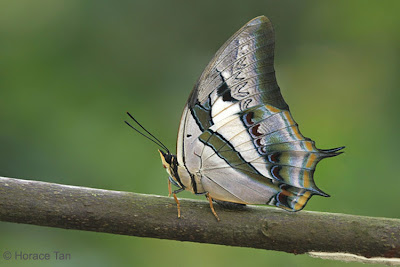 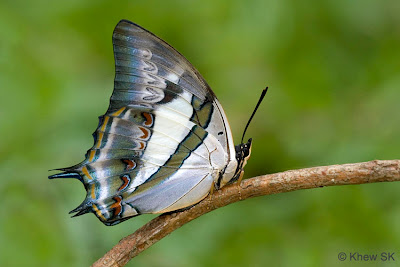 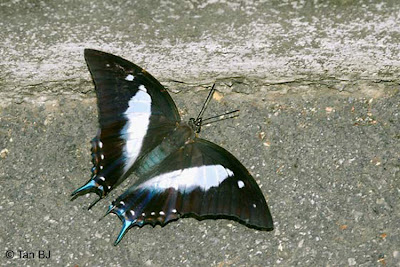 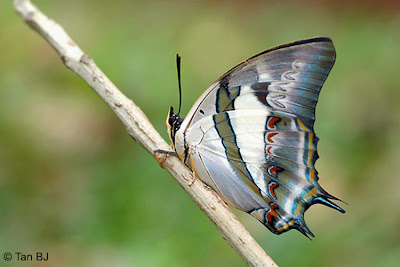 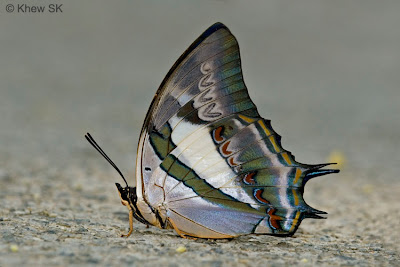 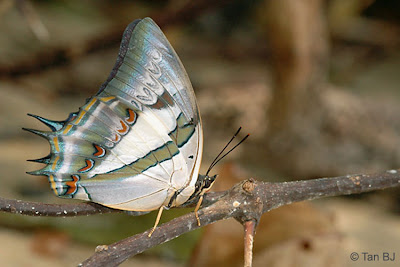 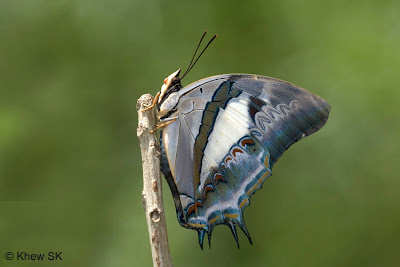 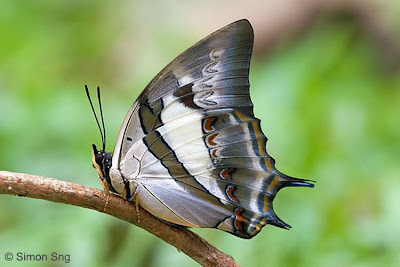 I am so happy to read this latest update about the magnificent butterfly. I sometimes spotted its caterpillar though, the number of the caterpillar always comes with one, barely more than two. I can't even find more from the other neighboring host plant trees too. So when you mentioned that interesting fact of this butterfly is the butterfly is not as common as its ubiquitous host plants. I am curious what factors play the pivotal role to decide the number of this butterfly.
I know there is assamensis. What is the difference between Polyura schreiber tisamenus and assamensis?
Yours, Atsu

It is always amazing that the color combinations of butterflies are so beautiful, so diverse, and so different. The capture of these images helps create an interest and awareness of this beauty that surrounds us all no matter where we live. Thank you for the photos and the descriptions.

Thanks, Atsu. Glad that you've managed to spot the caterpillars! Perhaps the species is very vulnerable to predation by parasitic wasps/flies that reduce their population significantly.

Some of the regional subspecies are "questionable" as they look exactly the same. A lot depends on the source and the original authors' explanation of why they consider it a subspecies. You will have to look for the paper that describes the subspecies assamensis and form your own conclusions.

Thanks William for your kind words and support.

Happy New Year 2011 and may this new year be more fruitful for all the butterflies in Singapore and all of us!

I had a sad event this morning from two Blue Nawab pupae I was raising from stage three caterpillars for a month. One morning, two became in pupation at the same time. I was a bit mystified by the timing because each caterpillar's growing stage was not the same. One is bigger and advanced in terms of growth stage. Then, there was a strange color change in both of the pupae pretty soon. To my sadness, I spotted many(8 from two pupae) maggots mercilessly crawling on the bottom beneath them this morning.

I just wonder if they already caught the parasites when I found them(they were still very small) or were put eggs of parasitic flies on their body later. I kept two caterpillars without net protection in my indoor kitchen feeding Red Saga's leaves.

Your advice will be the most appreciative and thankful.

A pity to hear that your two caterpillars were parasited. It happens very often in the field, and it's perhaps one of the reasons why this species is not as common as it should be, since the caterpillars feed on several host plants.

I have personally seen and documented a parasitic fly laying her eggs into the egg of a butterfly that was just freshly laid! So, besides these parasitic flies and wasps laying their eggs into caterpillars, I believe that all the early stages of the butterflies are vulnerable.

We normally breed caterpillars in plastic boxes or aquariums to ensure that the chances of them being parasited is kept to a minimum.

Cheers and good luck with your next breeding opportunity!

Thank you for your kind advice on my question about the parasite on caterpillars. I should be impressed by the ingenious way of survival skills for these parasite wasps and flies though, I still feel sad about the way those caterpillars couldn't fully materialize their beautiful potentiality...

I am simply amazed how frequently the Blue Nawab's caterpillars are already falling prey to the parasitic flies. These caterpillars look so laid back. They don't show much interest in hiding themselves from others and prefer staying on the upper side of the leaves.

I was a bit curious about the fact that more common, the Plain Nawab needs far shorter time to be an adult butterfly than the much rarer Blue Nawab.

Again, thank you for your thoughtful advice and cheers!

Hi, AtsushiSan
We are trying to reach you. How are you doing? We are going to Singapore this week from Friday.
We hope we can see you again.
Y. Nakamura