Observation Notes on the Variability of the Common Four Ring

Observation Notes on the Variability of the Common Four Ring
Aberration or Valid Species? 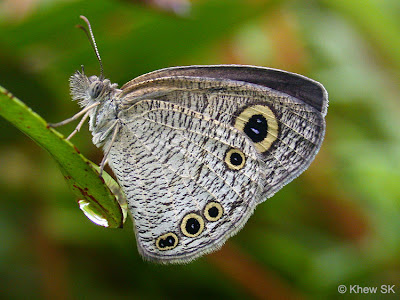 Many butterfly enthusiasts amongst the members of ButterflyCircle often get excited over observations of slight differences in the physical markings and colours of various butterfly species - wondering if it is a new or different species (or subspecies) and even hoping for the possibility of discovering something that is new to science! In urban Singapore, the latter is probably unlikely, because if there is a butterfly species still lurking around in our Singapore forests that is new to science, it would have long been discovered (of course, I'd be happy to be proven wrong!) 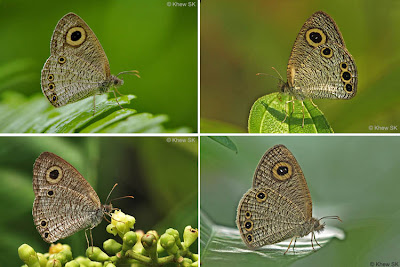 Indeed, with the many lookalikes, particularly in the Lycaenidae and Hesperiidae families of butterflies, and also proven with the discoveries and re-discoveries of many species that were thought to have gone extinct in Singapore, many ButterflyCircle members are always keeping a sharp lookout for unusual behaviour or butterflies that look slightly different from the norm. 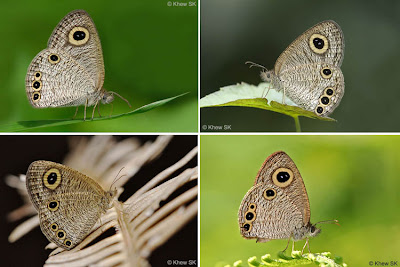 In this blog article, I discuss my personal observations of the wide variations in the size and arrangement of the ocelli on the hindwing of the Satyrinae, the Common Four Ring (Ypthima huebneri). These observations are purely from my records of field photographs of this species that may begin to suggest the possibility of a distinct species (or perhaps a subspecies) of the Common Four Ring that could exist in Malaysia and Singapore. 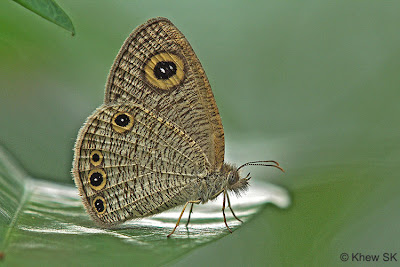 A Common Four Ring where the ocelli are separated but those in spaces 2 & 3 are almost touching, but not contiguous 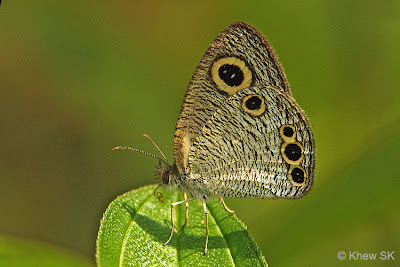 The Common Four Ring, like its larger cousin, the Common Three Ring (often referred to as a "Cinderella of Butterflies"), is as under-appreciated and more often than not, ignored by most butterfly watchers. Drab-coloured, unattractive and small, this species tends to keep close to the edges of forested areas where it discreetly goes about feeding on wildflowers or fluttering unassumingly amongst the grass. 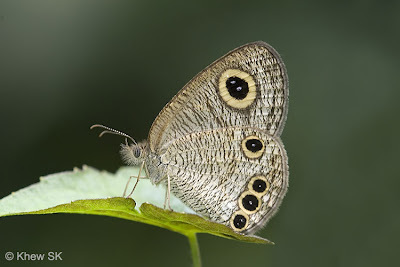 The Common Four Ring is described as having greyish brown uppersides with a large subapical ocelli (eye spot) on the forewing above. The undersurface of both wings is greyish or pale buff brown with fine dark brown striations. The hindwing features four ocelli (if the two small tornal spots enclosed in a single yellow ring is counted as a single ocellus). 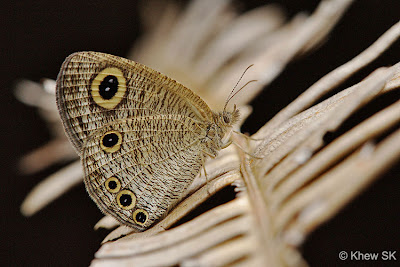 With a number of years of observing this species in the field, and photographing them, I noticed that the arrangement and size of the ocelli on the hindwings fall into three main categories : 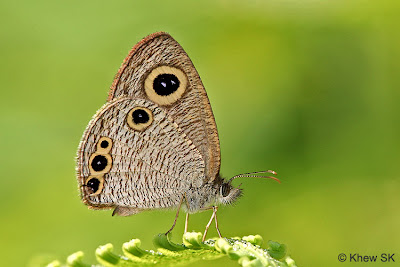 I am quite confident that there will be other individuals of this species encountered that may display further permutations to these three categories, as this species and many of the others in this genus, display a wide variability in the sizes of the ocelli and at times even feature some extra ocelli in uncommon individuals. 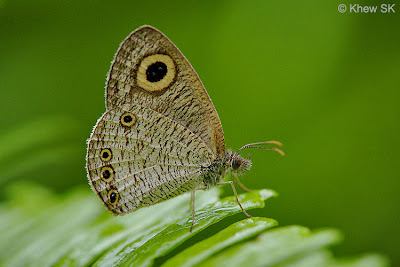 A Common Four Ring where the tornal ocellus and those in spaces 2 & 3 are distinctly apart from each other. Also note the striations on the hindwing are more sparse than those of the other individuals shown here, giving the hindwing a much "paler" appearance.

In looking at these field shots (all taken in Singapore) and placing them side-by-side, a non-local observer may be excused if he concludes that there could be more than one species of the Common Four Ring here, particularly where the ocelli (and hence the physical appearance of the butterfly) are so distinctly different. 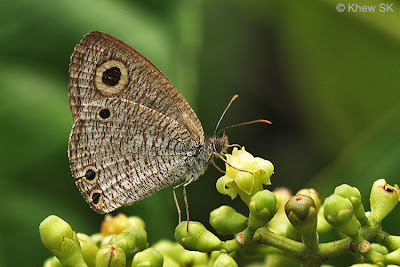 A strange individual of a Common Four Ring where the tornal ocelli and those in spaces 2 & 3 are distinctly apart, but the ocellus in space 3 is very much smaller, as well as a hint of another very small ocellus in space 4 as well!
One has to just turn the pages of the book "Butterflies of Thailand" by Pisuth Ek-Amnuay to conclude that there are more species of Ypthima in Thailand than have been recorded in Malaysia and Singapore. Although invariably, most books on South East Asian lepidoptera only depict a single species of the Common Four Ring, could there actually be more than one species or subspecies? Or are they just aberrations and variations of this single species? It is also pertinent to note that this species is only featured up to species level in many reference books - Ypthima huebneri. Could there be a subspecies in existence in Malaysia and Singapore that has yet to be documented? Or are these just seasonal variations i.e. dry and wet season forms? 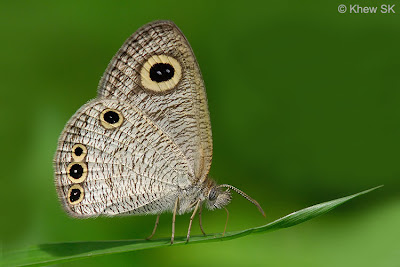 An example of a Common Four Ring where the ocelli in spaces 2 & 3 are contiguous, but separated from the tornal ocellus.

Food for thought, and more research needed before those questions can be answered with a higher level of confidence. Observers should continue to scrutinise individuals of the Common Four Ring when out in the field, and record their observations for future reference.

Posted by Commander at 1:30 PM