Life History of the Quaker 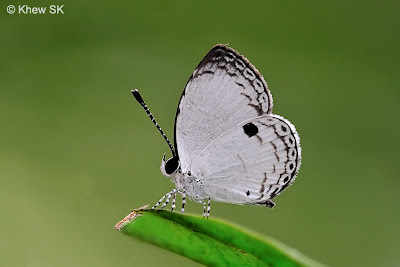 Physical Description of Adult Butterfly:
Above, the wings are dark brown. On the forewing, there is a white discal patch which is always present in the female but usually obscure or absent in the male. Beneath, the whitish wings feature a series of dark brown to black marginal spots and a post-discal series of disjoint striae. On the hindwing there is a prominent black spot in space 7 near the costa and a much smaller black spot in space 1a. 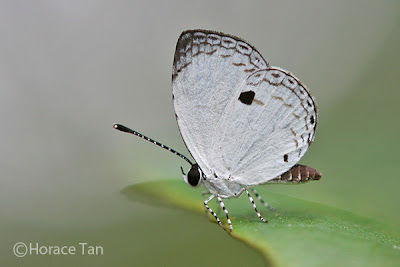 A Quaker about to take off from a perch on a leaf edge. 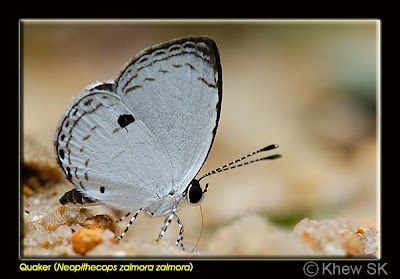 A Quaker puddling on a sandy ground.

Field Observations of Butterfly Behaviour:
This small species is not uncommon and is usually observed in the nature reserves flying alongside shady trails. Its flight is typically feeble and erratic. Usually only single individuals are encountered. The adults have been found to visit flowers, especially that of Leea indica. Puddling individuals have at times been sighted on moist sandy ground. 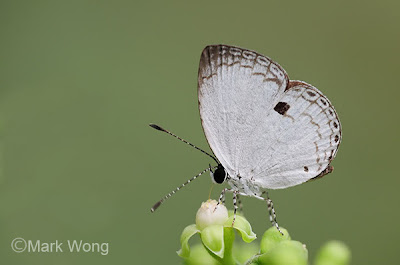 A Quaker taking nectar from a tiny flower of Leea indica. 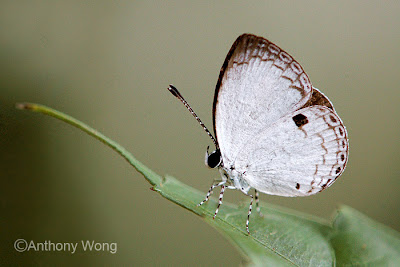 A Quaker taking a break from its erratic flight.

Early Stages:
The local host plant, G. chlorosperma, is a large shrub and can be found growing at multiple sites within the nature reserves. Its leaves are pinnate with 5-7 elliptic leaflets, each of which 10-14cm long. One noteworthy feature (common to Glycosmis spp.) is that its young shots, twigs and leaves are covered with rusty-red pubescence. The larva stages of the Quaker feed on the young to middle-aged leaves before they are hardened. 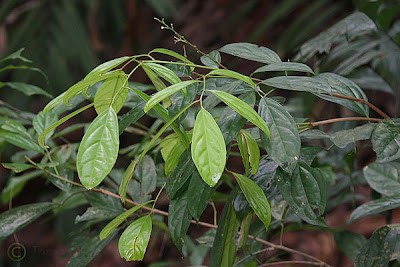 The female Quaker typically lay eggs singly on young leaf buds or the surface of a young leaf of the host plant. However, at times more than one egg can be found laid on the same leaf bud or young leaf. 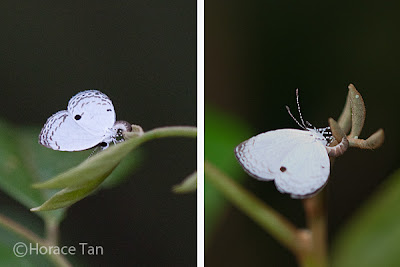 The small egg is discoid in shape (about 0.4-0.5mm in diameter) with the surface sculptured with a polygonal reticulum of ridges. When freshly laid, the egg is whitish with a pale green undertone. 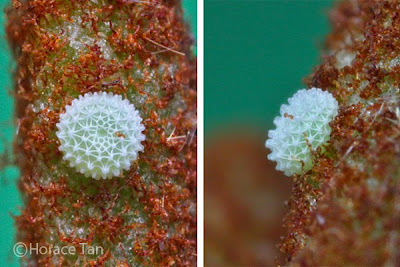 Each egg takes 2-2.5 days to hatch. The young caterpillar emerges after nibbling away a large portion of the egg shell the remnant of which is left alone as the caterpillar moves to feed on the leaf lamina nearby. Measured at a length of about 0.9mm to 1.0mm, its pale yellowish green body sports long dorso-lateral and lateral setae, and a pale yellowish green head capsule, After about 1.5-2.0 days of growth, its length reaches about 2.2mm. The rather puffed-up caterpillar then lies dormant on the substrate for a period of time before its moult to the 2nd instar. 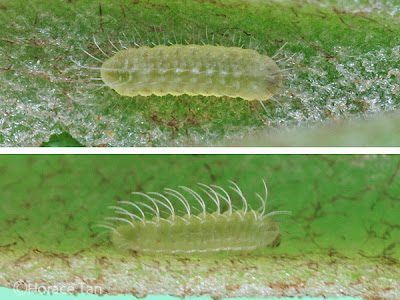 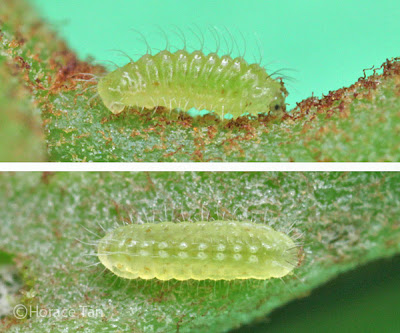 The 2nd instar caterpillar is yellowish green in colour. Now the body surface is covered in numerous short setae. Dorsally, the metathoracic segment and 1st-6th abdominal segments have small paired humps with long setae exuding from them. Long setae also occur laterally along the body perimeter. After about 2-2.5 days of growth, the body length reaches about 4mm. During the end phase of this instar, the caterpillar stays dormant for about 0.5 days prior to its moult. 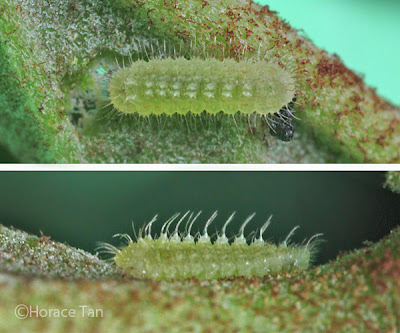 Two views of a 2nd instar caterpillar, early in this stage, length: 2.2mm. 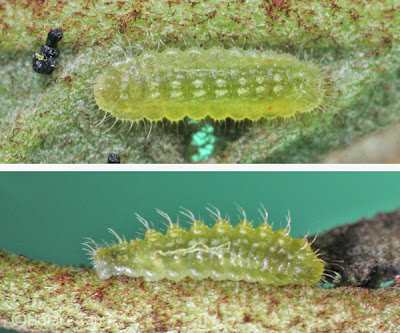 Two views of a 2nd instar caterpillar, late in this stage, length: 2.9mm.

The 3rd instar caterpillar has numerous short but rather prominent fine body setae which are mostly brown in colour. The prothoracic shield is barely distinguishable as it it coloured in the same body base colour of yellowish green. The dorsal nectary organ on the 7th abdominal segment, and the two tentacular organs on the 8th abdominal segment are now distinguishable. The 3rd instar takes about 2.5-3 days to complete with the body length reaching about 6.5mm. 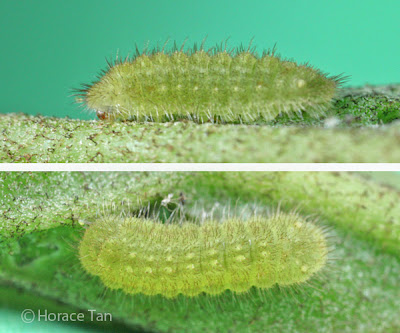 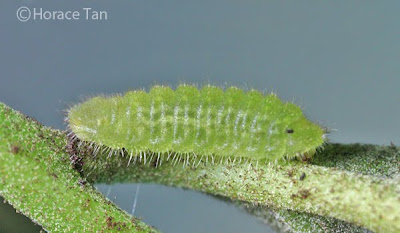 Two views of a 3rd instar caterpillar, late in this stage, length: 6mm. 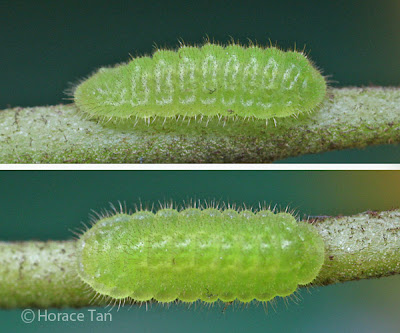 Two views of a dormant 3rd instar caterpillar, readying itself for the moult to the final instar.

As in the 3rd instar, the 4th (and final) instar caterpillar has numerous short and fine body setae and relatively longer lateral setae. The body color is yellowish green to pale green. 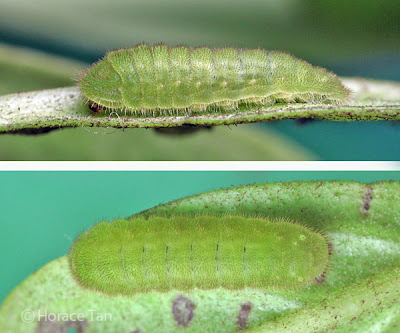 Two views of a 4th instar caterpillar, early in this stage, length: 8mm. 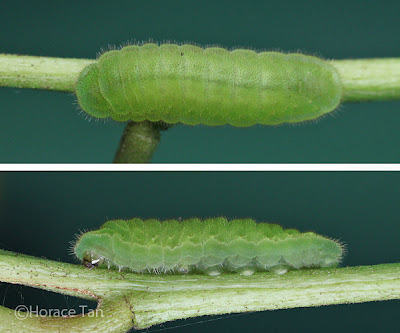 Two views of a 4th instar caterpillar, late in this stage, length: 11mm.

In the 4th instar, the proportionally larger prothoracic shield is more noticeable than in the earlier instars. It is in a lighter shade of yellowish green than the body base colour, and is diamond-shaped with the lower half more compressed than the upper. The dorsal nectary organ is also noticeable and ants have been observed to attend to it during field observations. The eversible tentacular organs are also conspicuous at this stage. 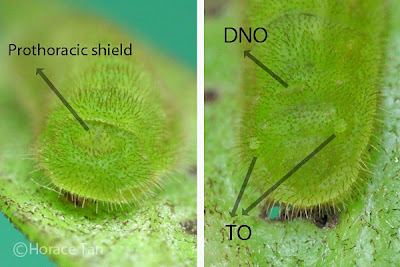 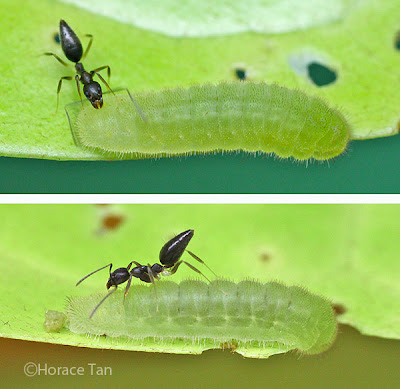 A 4th instar caterpillar being attended by an ant.

An ant attending to a 4th instar caterpillar of the Quaker.
After 3.5-4.5 days of growth and reaching a maximum length of around 11mm in the final instar, the body of the caterpillar gradually shrinks. The caterpillar ceases eating and wanders around for a pupation site. All bred specimens chose to enter their pre-pupatory phase on the leaf surface of a host plant leaf. Typical of many lycaenid species, the caterpillar readies itself for pupation by spinning a silk girdle and a silk pad. 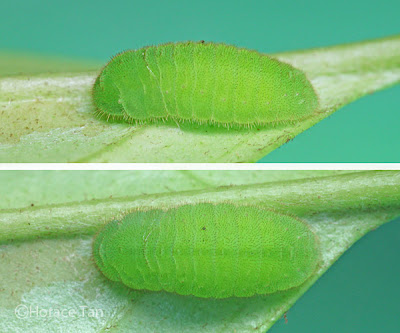 Two views of an immobile pre-pupatory larva of the Quaker, Note the silk girdle.

Pupation takes place after one day of the pre-pupal stage. The lightly hairy pupa has the typical lycaenid shape. It is yellowish green to green in base colour with a variable number of black to dark brown patches dotting its body surface. The pupa is secured to the substrate with a silk girdle and its attachment to the silk pad via cremastral hooks. The small pupa has a length of about 7mm. 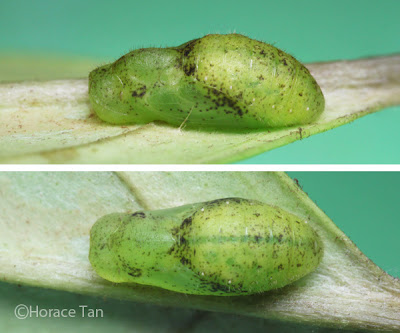 Two views of a pupa of the Quaker, length: 7mm

Five days later, the pupa becomes darkened in color signaling the imminent emergence of the adult. The next day the adult butterfly emerges from the mature pupa. 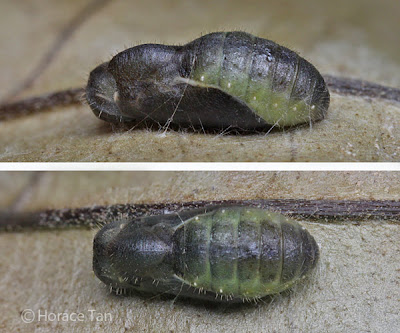 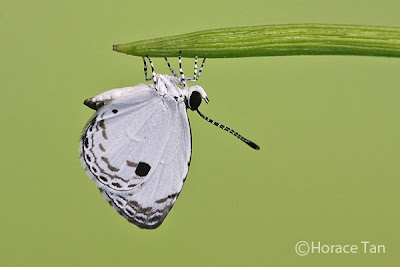 I would like to express my gratitude to Samsuri Ahmad of NParks for generous assistance in the identification of the host plant.