Butterfly of the Month - December 2009 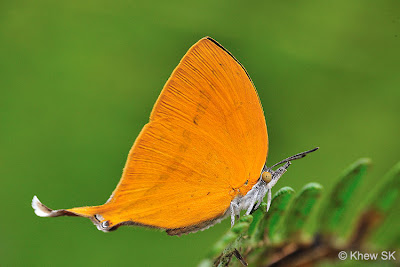 It's now exactly two years since the Butterflies of Singapore Blog started this series that features a butterfly species for each month. The Blog has chugged along steadily, providing and sharing information about butterflies in Singapore and the neighbouring region around our little island in the sun, and featuring the high quality photography of members of ButterflyCircle. 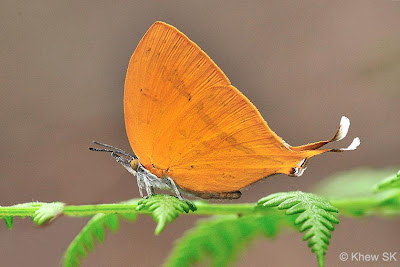 At a regular rate of at least one article weekly, sometimes more, the stories and documentation of butterflies are only made possible with the help of the active members of ButterflyCircle who have unselfishly contributed their photos to make this Blog special. Particular mention must be made of Horace Tan, our early stages expert, for his excellent and painstakingly detailed documentation of the life histories of many butterfly species - some of which have not been recorded before. 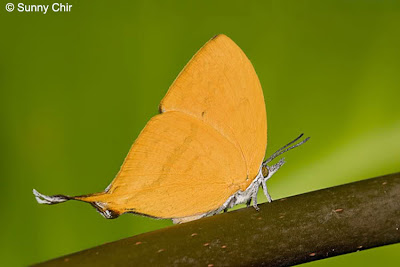 So, twenty four months have passed since we featured the Malay Lacewing as our first Butterfly of the Month back in December 2007, and now for this month of December 2009, we feature the small, but conspicuous and brightly-coloured Yamfly. A relatively common species which is as often seen in urban parks and gardens as well as the nature reserves, the butterfly usually stays in the vicinity of its caterpillar host plant, Smilax sp., (probably S.bracteata). 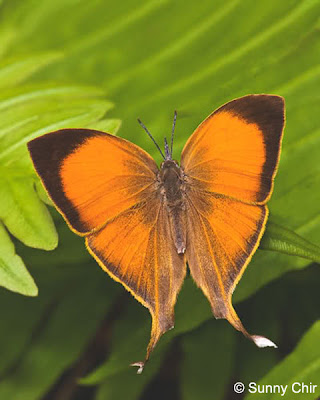 The Yamfly is a rich orange on the upperside, with a broad black apical border on the forewings above. The underside is a lighter orange-yellow, with obscure darker orange markings on both wings. The hindwing has a prominent tornal lobe, with orange/black/white markings, and a broad tail extending from vein 2 of the hindwing, terminating in a blackened end with white tip. 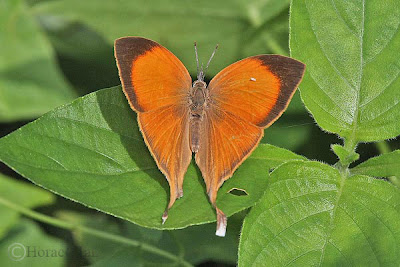 It is quite interesting that many Yamflys have been observed with their tails and parts of the tornal area torn off. Is it just wear and tear? Or that the decoy of the head-like appearance is working well to fool predators into attacking the 'wrong' end of the butterfly? 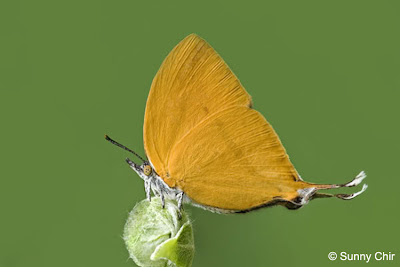 The butterfly is rather skittish most of the time, preferring to flit from perch to perch in the low shrubbery. They generally perch with their wings folded upright, although some individuals have been observed to sunbathe with their wings partially opened during certain times of the day. 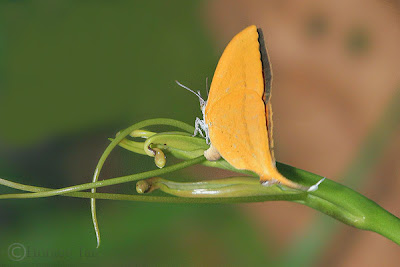 A female Yamfly ovipositing on the young shoots of the host plant, Smilax sp.

They are often observed singly, and encountered as often at urban parks as well as in the nature reserves. Where it is observed, its caterpillar host plant, Smilax sp. is probably not too far away. The host plant is apparently a non-native invasive species that is notorious for strangling other plants and even trees, and is the bane of forest maintenance personnel in Singapore. It is likely that the Yamfly, and its associated species, the Branded Imperial, has host-shifted to this non-native Smilax, from their original host plants in Singapore. 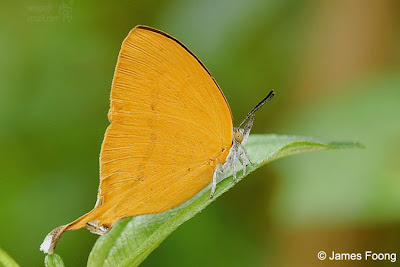 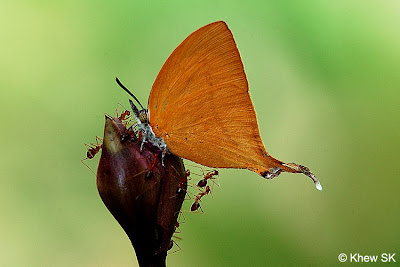 There have also been instances where the Yamfly is seen feeding off the sugary young shoots and buds of plants, like in this wild orchid shown here, where it shares the nectar source with ants swarming around it. However, the ants do not appear to threaten the Yamfly, and it feeds rather nonchalantly amongst them, without fear of being attacked. Perhaps by instinct, the butterfly knows which ants are predators and which ants are not? 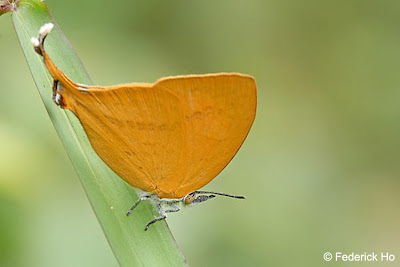 And so, with this bright orange diminutive butterfly, we end the final month of the first decade of the 21st century and look forward to 2010 and more discoveries and new things to learn about our winged friends and Mother Nature's Flying Jewels. 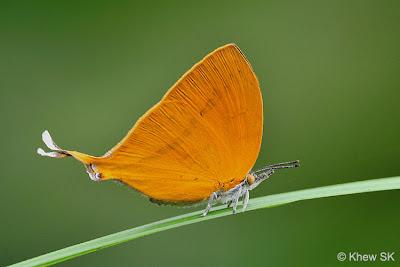 Have a Merry Christmas and a Happy New Year to all our readers and members of ButterflyCircle!

Yamflies are so beautiful. I just cant find it. I know they breed on the smilax sp, but even then I dont see any. Great pics.

Shooting butterflies require patience, persistence, endurance, and most of all, a huge dose of luck. There have been many occasions where I've encountered the Yamfly, where the individual was either torn and tattered, or very skittish and uncooperative. It took me at least 10 years of outings before I nailed a perfect specimen with a good composition, lighting and background! Even so, what we've featured here can still be further improved. :)

Not sure if you remenber me. Norman. We met in several outings during the early NPSS days.

When I chanced upon this blog, I thought this could be you and I am right :) Nice to see you are still very active in butterfly shooting :) Nice Yamfly! :D

Thanks for visiting the blog. Yes, I remember the name from NPSS, though I can only vaguely place the face! It's been a long time now. How are you and have you still be shooting these days?

Maybe in 10 years' time, you have even more technology in your hands to take even better shots! Perhaps a camera that can instantly take 3D shots where you can see all around the butt.

I am fine. Not very active in shooting since the dawn of DSLR. Been very busy with work lately. But will get back on when i have more time next year :) Not much on nature these days, just walk about shooting general subjects :)But will pay a visit to the AH butterfly trail before its gone.

Can you use my pic in this post? Please? Can be found in the butt photography forums, thread 'yamfly' by me, banded yeoman.

Sorry, I rarely re-edit published material unless it's to correct an error. Keep shooting and posting. There will be many other opportunties to feature your work. Your shots are getting better. :)

It has been a full, fun-filled, informative year highlighted by the release of the "Butterflies of Singapore" book and the related activities associated with it's release. I have enjoyed each visit to the Butterfly Circle and look forward to 2011. William