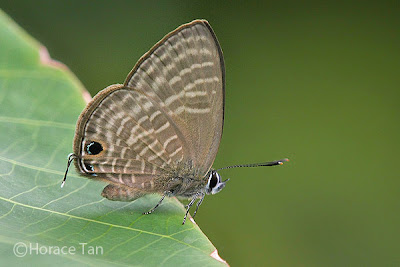 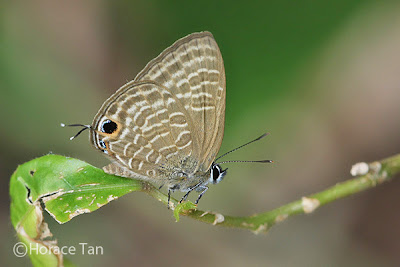 A Large Four-Line Blue perching on a small branch in the nature reserve.

Physical Description of Adult Butterfly:
The Large Four-Line Blue belongs to the pavana sub-group (the Four-Line Blues) in the genus Nacaduba, thus it possesses the shared characteristics of lacking a basal pair of lines in the underside forewing cell. Above, the male is purplish blue with marginal black borders of about 1.0mm thick. The female is pale blue with distal portions almost whitish, and has broad black borders of about 3-4mm thick. Beneath, both sexes are greyish brown with a slight silky lustre and with the space between the post-discal straie being unicolourous and of the ground colour. The underside stripes are broader and more diffuse than the other members, with the exception of N. angusta, of the pavana sub-group. On each hindwing, there is an mid-sized orange-crowned tornal spot lightly speckled with bluish-green metalic scaling. Both sexes have a filamentous white-tipped tail at the end of vein 2 of the hindwing. 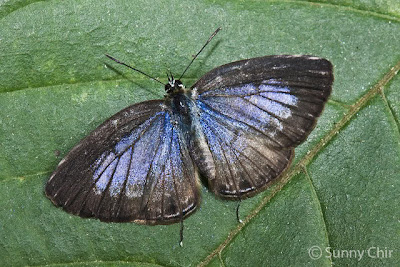 The upperside of a female Large Four-Line Blue.

Field Observations of Butterfly Behaviour:
Although there were a mere handful of sightings of individuals during one survey and 2-3 outings in the past few years, the re-discovery of this species was only recently nailed with an ID confirmation provided by Prof Konrad Fiedler. This species is uncommon in Singapore but adults have been sighted in multiple locations such as the Central Catchment Nature Reserve, Southern Ridges, western wasteland and an offshore island. The adult has an erratic but rapid flight, and typically makes its appearance in sunny weather. Encounters usually take place in sunlit spots with the adult sunbathing or flitting from perch to perch in the vicinity of its host plant.
Early Stages:
The only known local host plant, Entada spiralis, is a woody climber with bipinnate leaves, usually with 4 pairs in a pinna. This tree-topping vine can be found in the Central Catchment Nature Reserve and Southern Ridges. The early instars of the Large Four-Line Blue feed on soft tissues of the host plant such as young leaves, young stems, tendrils, and flower buds. Across its range of distribution, N. pactolus has been found to use only one plant genus (Entada) as larval host, thus it is a stenoligophagous species. 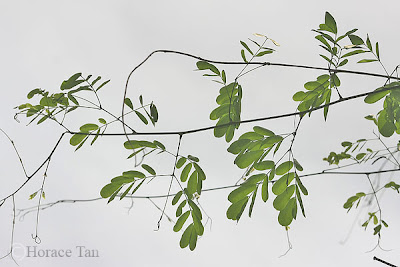 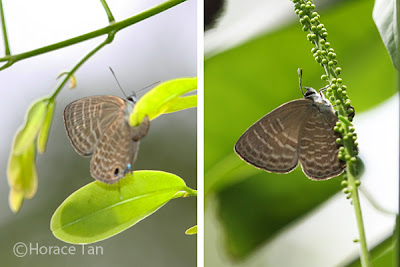 Oviposition by Large Four-Line Blue females. Left: on the underside of a young leaf. Right: on flower buds. 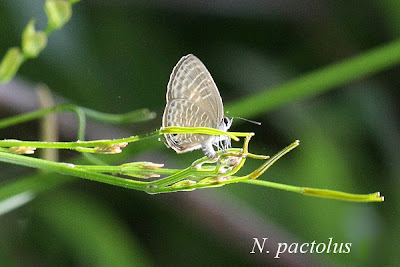 A mother Large Four-Line Blue laying an egg on a young shoot of E. spiralis.

Eggs are laid on young shoots, flower buds and young leaves (underside) of the host plant. Each egg is pale yellowish green, circular and has a depressed micropylar area. The surface is criss-crossed with a network of ridges. Each egg has a diameter of about 0.4mm. 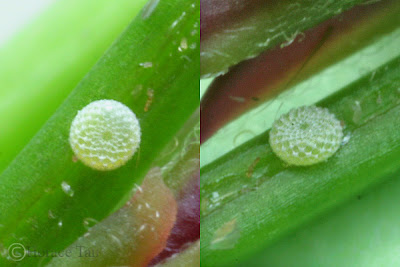 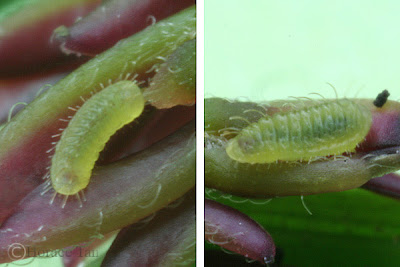 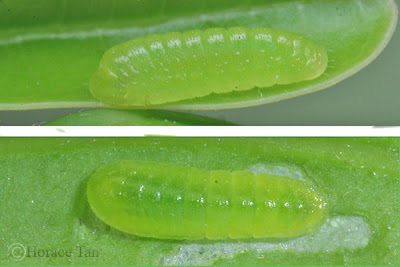 The 3rd instar caterpillar is still yellowish green but with a stronger emphasis in green. Faint markings in much paler yellow appear on both sides of the dorsal line. The body is also densely covered with short brown or transparent setae. Both dorsal nectary organ and tentacular organs are not unmarked and are barely distinguishable. The prothoracic shield is white with a slight greenish tinge. 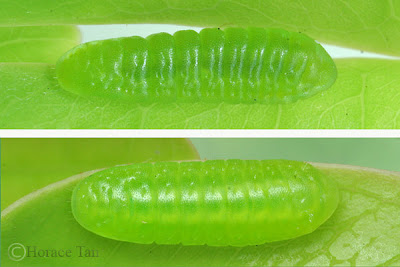 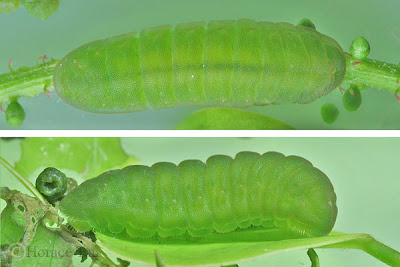 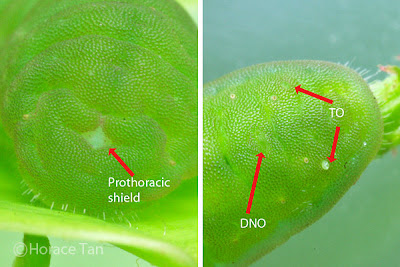 The 4th instar lasts for 4 days and the body grows up to a length of about 13-14mm. On the last day of this stage, the caterpillar ceases food intake and its body shrinks in length. Once a pupation site is selected, the pre-pupatory caterpillar prepares for pupation by spinning silk threads to form a silk pad on the substrate. It then stations itself with a silk girdle across its thorax and with its rear end attached to the silk pad. 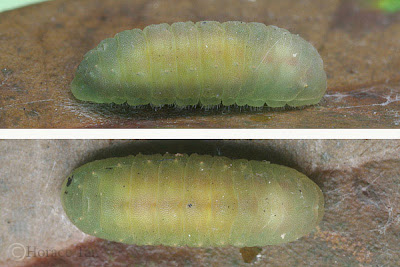 The next day, after 11-12 days of larval growth, pupation finally takes place. The pupa has the typical lycaenid shape, and is covered with short brown setae. Ground colour is pale brown, and mottled with dark brown spots of various sizes and shapes. Length of pupae: 9-10mm. 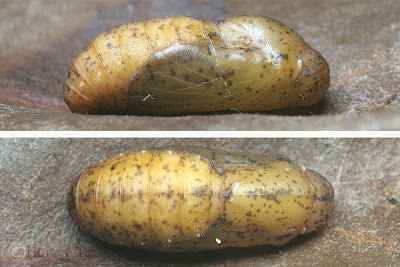 Five days later, the maturing pupa becomes increasingly darkened in the head, thorax and the wing pads. The blue patches on the forewing upperside are now noticeable through the pupal skin. The next day the adult butterfly emerges from the mature pupa. 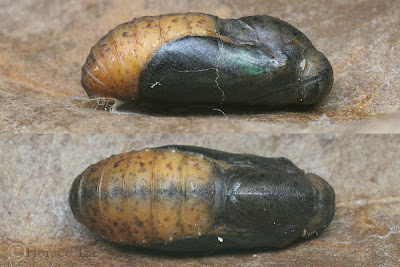 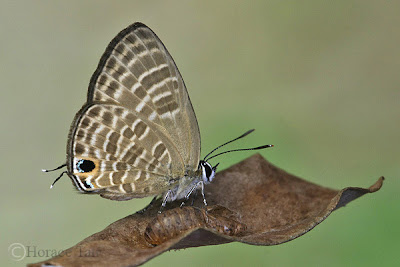 Very nice work again Horace. I have yet to shoot this guy, maybe I should emerge from 'retirement'. :)

Thanks for being a regular reader and commenter at our Blog, Henry. Yes, you should definitely emerge from your retirement. The butts are waiting for you. ;)

Thanks, Henry. :)
As Khew said it, you should definitely start your butt-shooting hobby again. We all enjoy your high-quality butterfly pics posted at the BC forum, and many of these are also selected for appearance in blog articles here.

Wonderful post. Stumbled upon your site thro' a link. Very informative about butterflies whom I know are just colorful. Appreciate the good quality pics.Thanks for sharing.

Do peep into my site when u find time.

Many thanks, Chitchat for your kind words. :)

BTW, a very interesting blog you have too.

Thanks, hs5spl. :)
Interesting and informative site you have there in your signature.