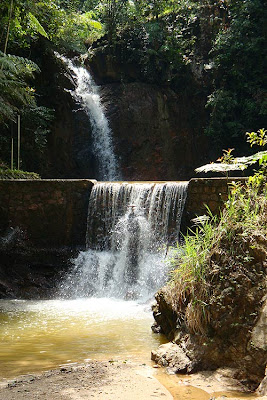 Rising 1,500 meters above sea-level on the Titiwangsa mountain range of Peninsular Malaysia is Fraser's Hill. Named after a solitary Scottish pioneer, Louis James Fraser, who set up a tin-ore trading post in the 1890s, it actually consists of seven hills. Fraser's Hill is truly an idyllic place for one to rest, relax and to escape from not only the heat and humidity but also the hustle and bustle of city life. It is one of the prettiest of the Malaysian Hill resorts. Sometimes referred to as the "Little England", the architecture of many of the older buildings on Fraser's Hill reflect colonial style designs. 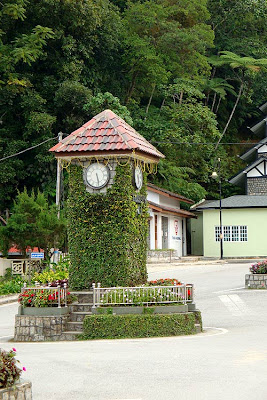 The iconic Clock Tower at the Town Centre is a familiar sight as one passes the gateway into Fraser's Hill
After a long time since my last trip to Fraser's Hill some time in the later part of the 20th century, I decided to make a trip up to revisit some of my old butterfly hunting grounds on this hill resort. As fortune would have it, my sister in law managed to get her company accommodation at the Frasers Pine Resort, and off we went on a road trip starting from Singapore. Setting off at a very sane hour of 9:00am, we set off from home in two cars. Being a weekday, the traffic at Tuas Checkpoint and also on the Malaysian side was light and we were off on the start of the 400km road trip via the N-S highway in no time at all. 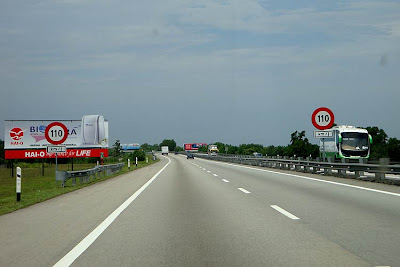 Driving on the N-S expressway is a breeze. But watch the speed limits and the local Malaysian fuzz on the lookout for speedsters!

Driving on the highway was fine, though one has to keep alert for the traffic police road blocks for speeding. The official speed limit is 110kph, and we kept to it (most of the time) although ever so often we had cars zooming past us as though the Devil himself was on their tails. 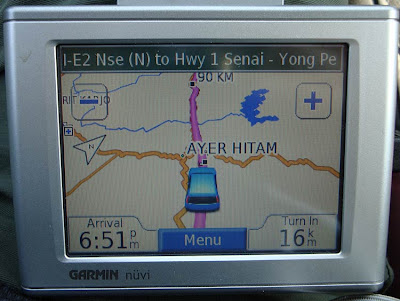 Thank goodness for technology. Our voice-guided GPS showed us the way to our destination (well, it works most of the time!)

With the use of our trusty Garmin GPS, we were reasonably confident of not getting lost - even though at times, the device can get abit cranky and made us go round in loops. After a short pitstop in Kuala Lumpur for lunch, we made our way out of the city and headed to Rawang and Kuala Kubu Bahru, which is the village gateway leading up to Fraser's Hill. From here on, the road is very windy, and speeds below 50kph are the norm, unless one wants to end up at the bottom of a ravine. 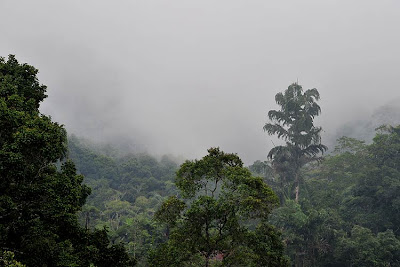 We made it past the Gap (which is currently under renovations) and waited at the entry gateway to the road up to Fraser's Hill. The narrow winding road goes on for about 8km to the top of the hill station, and is scheduled one-way up/down traffic. Contrary to what I had been told, this up-down schedule is still in force, as the other new road which allowed for a single way up and down previously, was damaged by a severe landslide in 2007. A bridge was destroyed, and the re-construction is still in progress. As we were slightly early before the 5pm upward schedule, we waited patiently by the roadside. I was surprised to be greeted by a female Malayan Birdwing, coming down in the late hours to feed on the flowers of the Mussaenda bushes. A Chocolate Tiger also fluttered nearby, but neither of the butterflies were cooperative subjects for good shots. 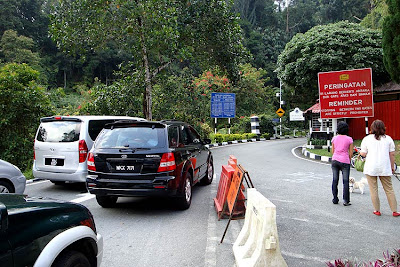 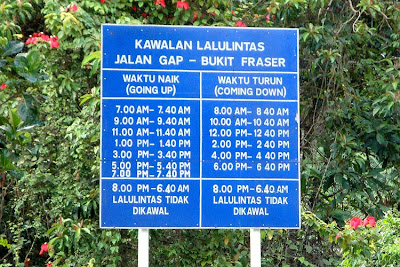 Waiting for the gate to open for the upward traffic schedule. The sign shows the schedules for up and down traffic, so plan your timing carefully if you do not want to wait.
Accommodation for us was the Frasers Pine Resort, a series of serviced apartments built into the sloping topography of the hillside. With three bedrooms, attached bathrooms, a living room and kitchen, it was sheer 5-star luxury compared to the spartan accommodation that we had at Endau Rompin. (Not to mention hot water for bathing!) 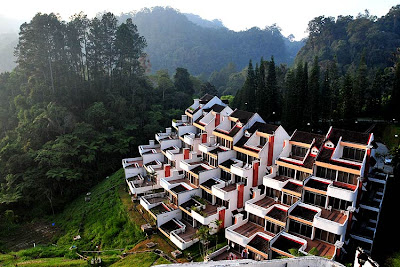 A view to the lower apartments at the Frasers Pine Resort. We stayed at a similar apartment at the middle level of this development.

Fraser's Hill is well known to the bird-watching community for its rich bird life, and indeed, the International Bird Race 2009 had just been held a couple of weeks before our trip here. 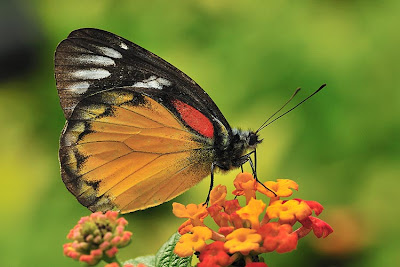 Saturday morning had us out in the early sunshine, and a cool breeze blowing. The car's thermometer read 20degC. The Red Spot Jezebel (Delias descombesi eranthos) were out in numbers and several were feeding on the flowers of the Lantana bushes. Somehow, the red Lantana flowers appeared a deeper red than their lowland varieties. 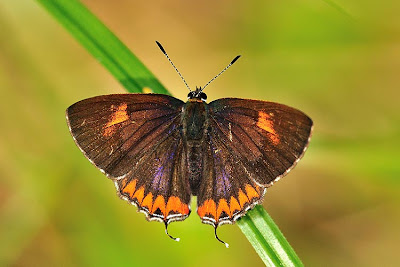 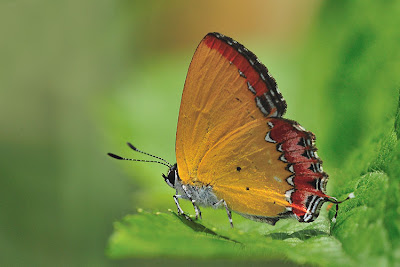 We visited a flower garden, the children's playground and several other town centre spots which had pretty flower beds all abloom. This was where I managed to spot several Purple Sapphires (Heliophorus epicles tweediei) one of the signature Lycaenids of montane environments like Fraser's Hill. We visited the steep Bishop's Trail, but decided to leave the rather tough trail for another future visit. So we left the trail, but not before the friendly local leeches managed to take a sip of Singaporean blood. 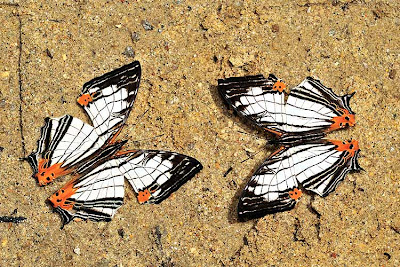 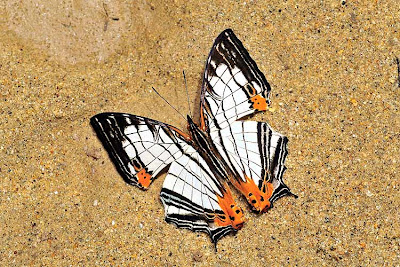 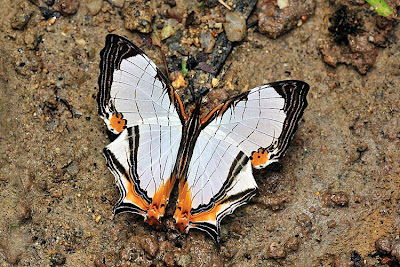 The Mapwings came out to play. There are two different species of the Cyrestis shown here.

In the later part of the morning, we headed for the Jeriau Waterfalls, where we encountered many puddling species. The magnificent Rajah Brooke's Birdwings were zooming and gliding past us, but none cooperated to stop for a good shot. There were many puddling Mapwings (Cyrestis spp), a couple of Great Mormons, Chocolate Albatrosses and so on. The catch of the day and the entire trip, must have been the Constable (Dichorragia nesimachus deiokes) of which there were two speedy individuals that were cooperative enough for some good shots. 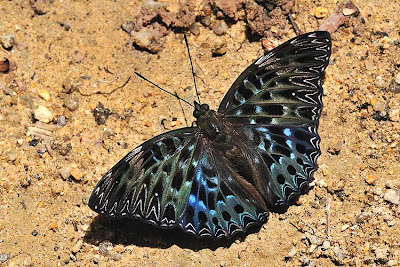 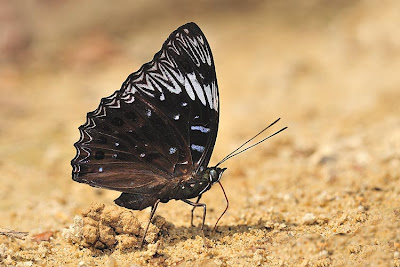 We called it a day as we had to head back to the Frasers Pine Resort for our catered lunch. After a lazy afternoon, we headed to Ye Olde Smokehouse for a spot of English tea. A trip up Fraser's Hill would not be completed without sampling the excellent English scones with strawberry preserve and thick cream, complete with Earl Grey tea. 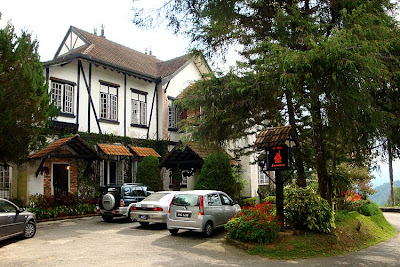 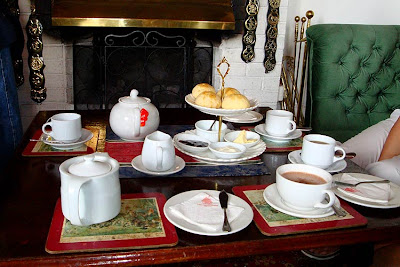 At Ye Olde Smokehouse for afternoon tea. Scones and apple pies with strawberry preserve and cream. A spot 'o Earl Grey tea, anyone?

On Day 2, we headed out to the flowering spots in the town centre and again encountered several cooperative male Purple Sapphires, a few of which were sunbathing with their wings opened flat. After that, it was down to the Jeriau Waterfalls again for another round of the puddlers. This time, the Mapwings and even a Spotted Sawtooth (Prioneris thestylis malaccana) greeted us. I had some exercise chasing a rather uncooperative Vagrant (Vagrans egista macromalayana) without a single good shot of it! 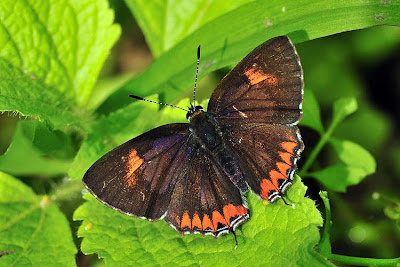 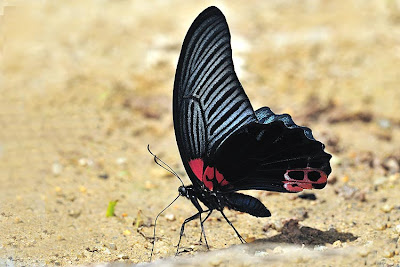 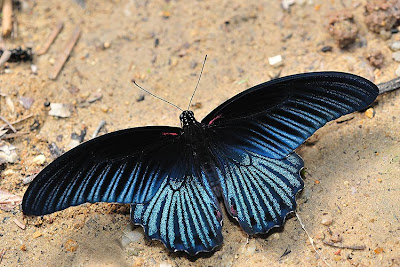 In the later part of the afternoon, we also encountered the more common species like the Fluffy Tit, Striped and Blue Jays, more Mapwings, a Banded Swallowtail, and a few other unidentifiable flying objects flying at turbo charged speeds. The most common Pierid must be the Chocolate Albatross, which were out in numbers during this time of the year. I spotted a Four-Bar Swordtail and a rather large Pallid Faun, neither of which stopped for a shot. 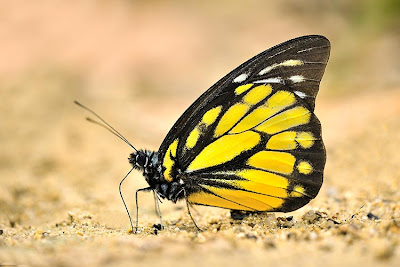 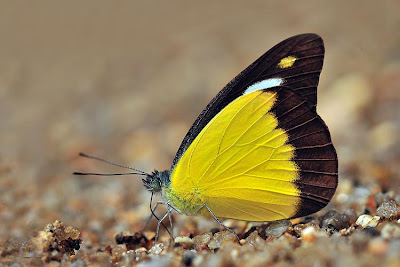 Dinner over the 3 nights were the mandatory steamboat (recommended for a cold night), spaghetti and porridge. Of course, no visit to Malaysia would be without tasting the King of Fruits - the durian. My apologies to my western readers who would probably barf at the sight of this pungent fruit - but there you go... we Malaysians and Singaporeans adore this fruit. 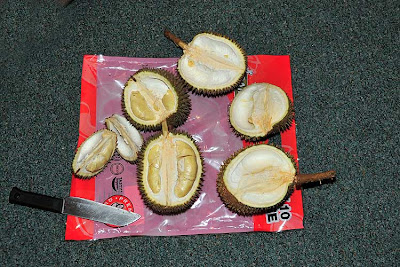 All too soon, it was Monday morning and after a quick cup of coffee, we set out to get past the downward schedule of 8am. The trip down was uneventful, and we tried a different route to get to the highway and home to Singapore. We made the 400km trip back, with a short pit stop for refueling and lunch in about 6.5 hours, occasionally pushing the speed limits but lucky enough not to encounter any of the local traffic cops. But then again, we were still passed by some vehicles probably with the same Devil on their tails.

Fraser's Hill is also famous for its moth diversity. Here are two common ones
We used the new Checkpoint from Johor Bahru to Woodlands, figuring out that since it was around 3:30pm on a Monday, there would not be the attendant traffic pile up at the Causeway. We were quite right and breezed through without much delays, though on the Singapore side, the H1N1 screenings continued. 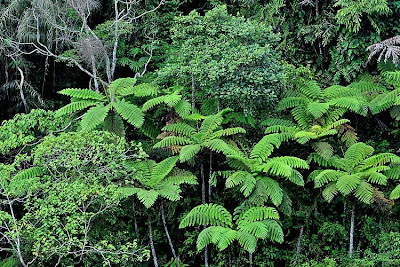 Adios! Till We Meet Again! - A typical scene at Fraser's Hill - with the lush Tree Ferns along the mountain side

We reached home before 4pm, happy and satisfied that our old friend, Fraser's Hill, still has much to offer in terms of butterfly biodiversity as before.

Text and Photos by Khew SK
Posted by Commander at 11:32 PM

I wanna join in the next trip. Looks like lots of fun and good sights to enjoy.

I am from Malaysia. I have completed a typescript on stag beetles of Peninsular Malaysia, Singapore and Borneo which will be published in a limited edition by a small academic press belonging to the University of Sciences, Malaysia (USM) in Penang, Malaysia. I am financing the research and the preparation of my typescript including its layout wholly by myself.

Thanking you in anticipation.