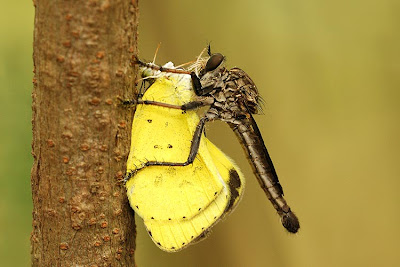 A Robberfly, a vicious and efficient killing machine, impales a No Brand Grass Yellow and perches with its prize kill whilst sucking the nutritious juices out of the paralysed butterfly

It is quite well-known that butterflies are harmless insects that do not bite, sting, scratch or cause any harm to other animals. They are therefore vulnerable to the wide variety of predators in the animal world. Whilst many butterfly species have adapted themselves with survival strategies (which will be the subject of a future blog article here), they are still susceptible to ending up in the stomachs of various birds, animals and insects which prey on them. 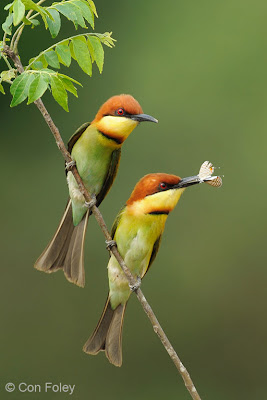 A pair of Chestnut Headed BeeEaters with one Jamides sp. captured

Most observers will notice butterflies fluttering around flowers, frolicking in the sunshine, feeding, mating and going about their usual daily activities. However, dangers always lurk where the butterflies don't realise... until it's too late. Predators adopt a whole range of tactics to capture the unsuspecting butterflies - stealth, speed, surprise, traps and so on. 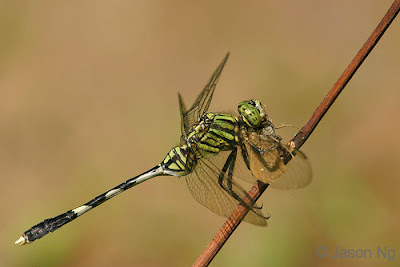 A dragonfly captures a Lycaenid

A butterfly's life is therefore fraught with dangers as they go about their daily routine. In this article, we feature a range of predatory attacks on butterflies by various predators. It is never a pretty sight to see any victim of a predator in the animal world, and even though the death of a butterfly comes with much less blood and gore, it is still nevertheless a pitiful sight, as the poor butterfly struggles for its last breath of life in the jaws of its nemesis. 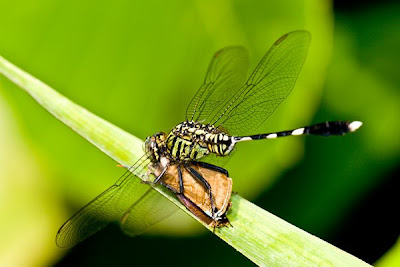 A dragonfly with a Lycaenid prey in its jaws

The first category of predators use a combination of speed and stealth. These predators - birds, dragonflies, mantises, lizards, robberflies and wasps tend to wait till the unsuspecting prey comes close enough for the predator to launch a high speed attack on the butterfly. Very often, these attacks are not necessarily successful, and the butterfly escapes with a part of its wings torn off, or in some cases, the predator misses altogether when the butterfly makes a last-minute maneuver to get out of harm's way. 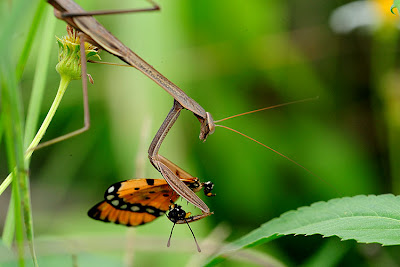 The next group of predators combine stealth with poison - e.g. the Crab Spider. These masters of camouflage are often seen hiding amongst flowers and waiting for a hapless butterfly to fly close enough to be grabbed and bitten. The poison of these spiders appear to act swiftly, immobilising the prey within a few seconds, and paralysing the butterfly quickly as the spider sucks the life out of it. 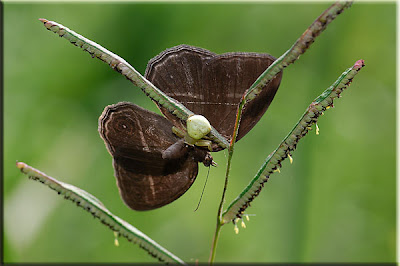 A Crab Spider holds on tightly to an immobilised Nigger 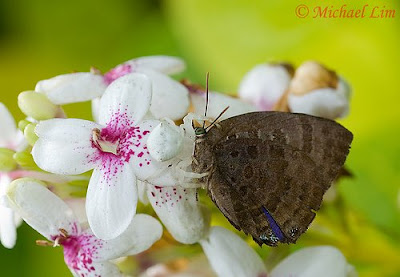 Another Crab Spider, well camouflaged amongst the flowers of Pseuderanthemum sp, with a dead Centaur OakBlue in its jaws

Predators which use entrapment - usually web-weaving spiders of various species, often trap the unsuspecting butterflies that fly into the sticky web and get themselves entangled. From field observations, the butterflies that get themselves into this life-ending situation are those that are old and weathered. The stronger butterflies often have a chance of flapping violently and we have seen many that have escaped the jaws of the spider in good time, before the spider can sink its fangs into the butterfly. 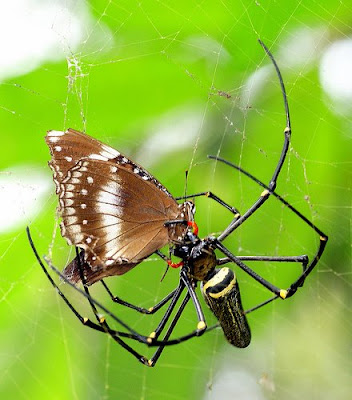 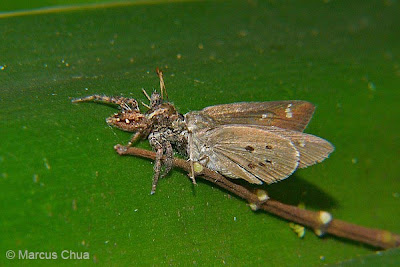 A spider drags a paralysed Palm Bob to its lair

In the natural world, the weak and old are often fair game for most predators. Once a butterfly is old, tattered and flying erratically due to injury or old age, they become easy prey to various predators which help end their lives swiftly and viciously. 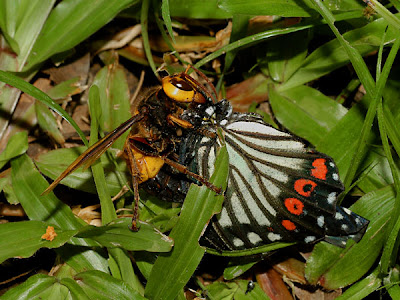 Whilst an adult butterfly's life is always subject to dangers from predators as it goes about its daily activities, its early stages are also vulnerable to a variety of parasitism, particularly at the egg, caterpillar and pupa stages . Parasitic wasps and flies can often wipe out an entire clutch of eggs and experts often estimate that, in the wild, anything between only 1-5% of all the eggs that a single female lays in her lifetime produces the next generation of adult butterflies. The majority of the rest will perish due to predation and parasitism. 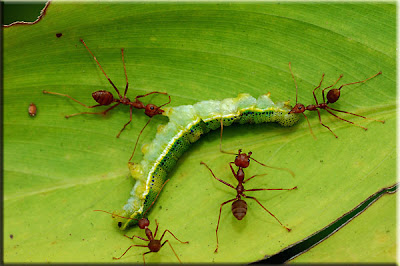 Even caterpillars are not spared. Here, the caterpillar of a Mottled Emigrant falls prey to Kerengga ants (Oecophylla smaragdina) 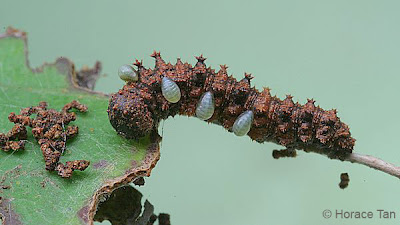 A Commander caterpillar with parasites on its body 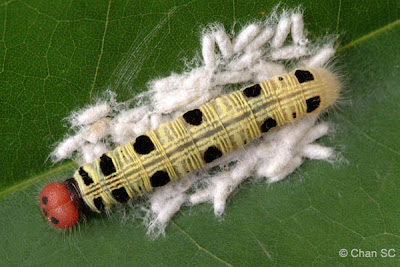 A caterpillar surrounded by the pupae of parasites

Whenever we encounter a pretty butterfly fluttering amongst flowers and we admire its beauty and grace, we should always be reminded that these 'flying jewels' of the insect world are always in danger of ending up dead in the jaws of a predator in the next few moments.
Indeed, one can always argue that the biggest 'predator' may also be Man himself, as the destruction of habitats and the spraying of pesticides often kill far more butterflies in all stages of their life histories than any other predator can. As we take stock of our biodiversity in Singapore, and as more species are threatened by a variety of causes, there should be a strategy for the conservation of habitats and sanctuaries for our butterfly fauna to survive for our future generations to enjoy.
Text by Khew SK ; Photos by Con Foley, Chan SC, Horace Tan, Marcus Chua, Michael Lim, John Lee, Henry Koh, Jason Ng & Khew SK
Posted by Commander at 10:28 PM