Butterfly Photography at our Local Parks 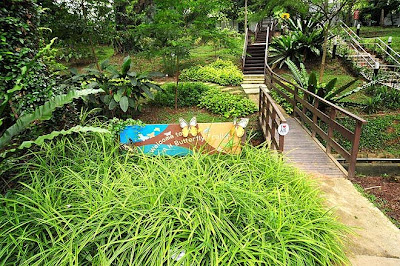 Alexandra Hospital is a 400-bed hospital located in the West of Singapore. Nestled on an 11 Hectare site, the hospital is a picture of tranquil setting, lined with mostly colonial style buildings built since the late 1930’s. From its humble start in 1971 when it was handed over to the Government of Singapore, the hospital underwent various transformations and enhancements of its medical services to the public.

The hospital was restructured and became a member of the National Healthcare Group on 1 Oct 2000. Under the stewardship of the CEO Liak Teng Lit, the hospital became well known for its innovation and service excellence. Besides the initiatives on the medical and services fronts, the hospital grounds were also attractively landscaped and the colourful Canna bushes welcomed visitors to the grounds of Alexandra Hospital (or AH, as we all know it)

How It all Started

It started with an article which I wrote in the July 2001 issue of Gardenwise, the newsletter of the Singapore Botanic Gardens, featuring butterflies. CEO Liak, who was then a Board Member of the National Parks Board, read the article, and invited me to give a talk at AH during their Clean and Green Week in 2001. He wondered if it was possible for AH to feature more butterfly species than the Singapore Botanic Gardens! 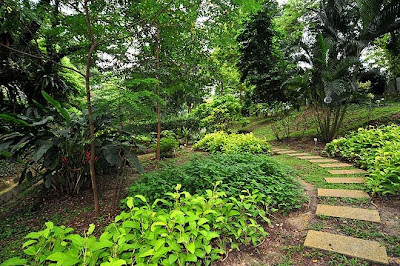 One of his staff, Mrs Rosalind Tan, was assigned to start the butterfly trail at AH. With a little bit of help from some NSS enthusiasts, the landscaping for an open patch of green in the valley between the main blocks of AH and Alexandra Road began. Butterfly host plants as well as nectaring plants were planted in the valley, and paths created around the lush landscaping. With Rosalind's tireless enthusiasm, and her supportive other half, retired architect Tan Wee Lee, and the AH gardeners, the rest, as they say, is history. 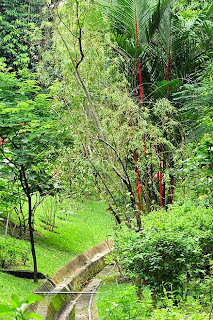 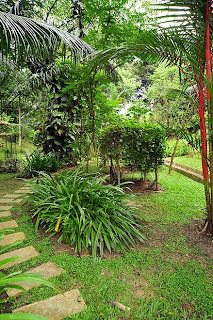 After about 2 years, the landscaping with a myriad of butterfly host and nectaring plants worked wonderfully, and Singapore's first free-ranging butterfly trail was born! 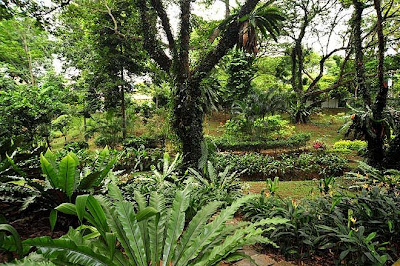 Fast forward to 2008. After seven years, the AH Butterfly Trail is still lush, green and full of life. In April 2007, AH recorded its 100th species - a Chestnut Angle. The checklist for AH stands at 101 at the end of 2007. (Links to ButterflyCircle Forums. Please register an account)
Butterfly Photography at the AH Butterfly Trail 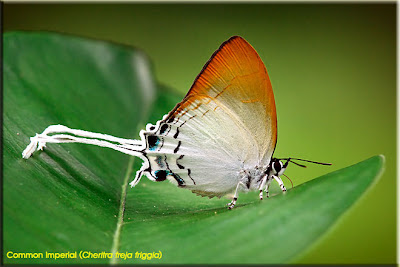 The AH Butterfly Trail is an excellent location for fledgling butterfly photographers. On a typical sunny day, there would often be at least 10 species to shoot. Amongst the more common ones are the Blue and Dark Glassy Tigers, as well as the attendant Common Palmfly and Chocolate Pansy. Often seen are the Emigrants - Lemon, Mottled and Orange, the Common Mormon, Lime Butterfly, and Baron. Over the years, the tally of 101 species includes some of the rare Lycaenids and Hesperiids which visit the trail occasionally. 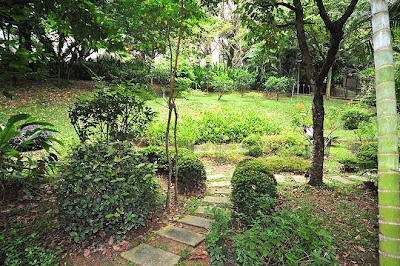 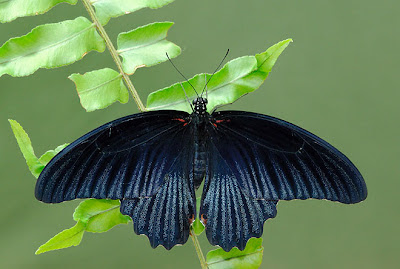 With the host plant Aristolochia acuminata (formerly referred to as tagala), AH Butterfly Trail often features the two butterflies which feed on this plant - the Common Birdwing, and the Common Rose. A unique subspecies, possibly antiphus also flies at this trail. It is always breathtaking to see the large and spectacular black-and-yellow Common Birdwing fly around the trail, and during a good season, up to six individuals can be seen, gliding high above the trail. 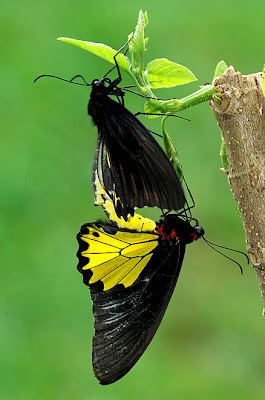 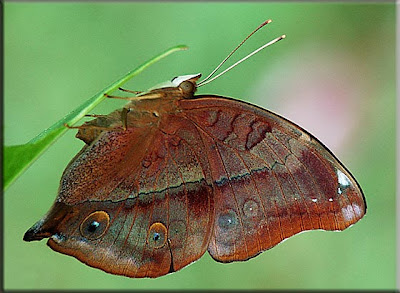 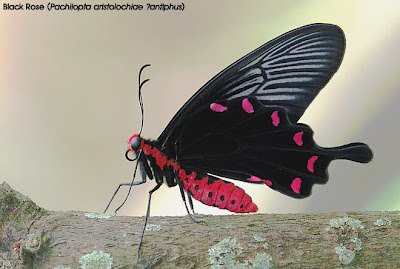 The popular spots for butterfly photography are at the sunlit areas where the Common Snakeweed, Lantana and Indian Heliotrope grow. These flowering plants are the favourites for the Glassy Tigers, Grass Yellows and many Skippers. 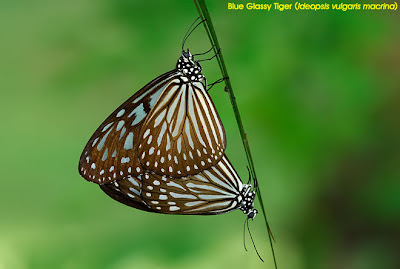 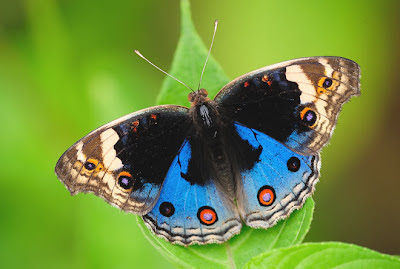 In the shadier areas of the trail, one can often encounter Skippers like the Chocolate Demon, Paintbrush Swift and the Grass Demon. The flowers of Pagoda Flower, and many other flowering plants along the trail also attract a variety of butterflies to feed on them. 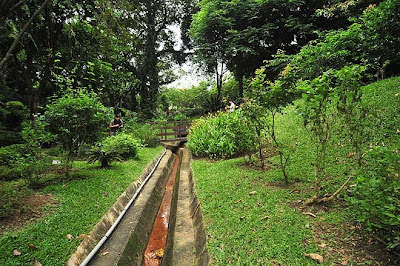 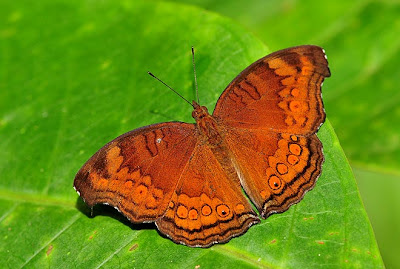 Besides butterflies, the Trail is also home to a rich biodiversity of flora and fauna, and it is not unusual to observe the Web of Life lessons at this trail, where predators and victims of all shapes and sizes inhabit the trail. An observant enthusiast can often see butterflies mating, laying eggs, and a variety of caterpillars in various instars on the host plants at the Trail. 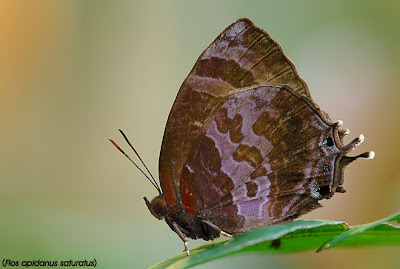 Other Areas for Photography at AH

Beyond the Butterfly Trail, there are also areas which are good for macro photography. Amongst these are the Medicinal Garden, the Eco Pond and all around the lushly landscaped grounds of the hospital. 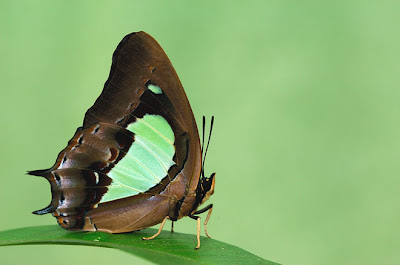 What the Future Holds

It has been seven years since the start of the Butterfly Trail, and till today, the Trail has its regular weekend photography visitors, each hoping to nail a better shot of a species of butterfly. Moving on, it is sad to note that AH will be moving north to Yishun where the new 550-bed Khoo Teck Puat Hospital is currently under construction. Expected to be completed and fully operational in early 2010, the KTPH will replace AH.
What will happen to the hospital grounds after AH is vacated? It is likely that the hospital will continue to be operational for a few more years thereafter, and beyond 2014, the premises are likely to be redeveloped for other uses. It would be sad to see the AH Butterfly Trail go, as for many butterfly photographers, the Trail was the start of many years of butterfly watching and shooting, having whetted the appetites and enthusiasm of many an avid butterfly photographer.
On the positive side, many other similar trails are being planned or already in existence. The experience and knowledge gained from the experiment with AH has been shared with the National Parks Board, and many parks, park connectors and gardens have been planted with butterfly-attracting plants to increase the butterfly biodiversity in our parks and gardens. One such successful example is the Butterfly Hill at Pulau Ubin. The new KTPH hospital at Yishun will also feature its own butterfly trail around the Yishun Pond. Work has started, and it will be a matter of time before the lush landscaping and tender loving care from Mrs Rosalind Tan and other enthusiasts will re-create a new butterfly trail at the new location.
How to Get There

Getting to the AH Butterfly Trail is quite easy, as it is just off the main road (Alexandra Road), and it is very accessible. Parking is chargeable if you drive, at the prevailing rates that the hospital charges. There is also a cafeteria at AH where you can stop for refreshments after a good session of shooting butterflies at the Trail.
Map of Alexandra Hospital 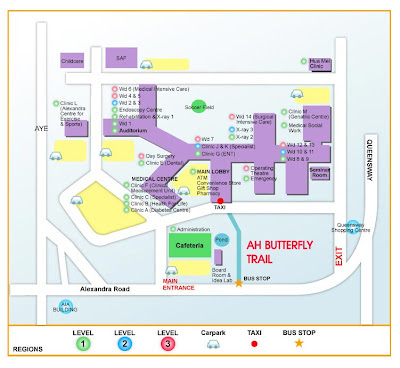 Text and Photos by Khew SK
Posted by Commander at 6:58 PM

I like your blog, with all the butterflies. I went down to AH last saturday and had some bugs shoots and giant caterpillar to me. But do not know the name for it. Nice blog!

Any idea if this AH butterfly trail is still around and worth visiting?