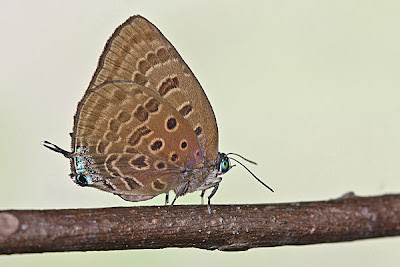 Physical Description of Adult Butterfly:
Being in the same cleander group of Arhopala genus, the adults of Vinous Oakblue are rather similar in appearance to the adults of Sylhet Oakblue (Arhopala silhetensis adorea) which was featured in an earlier blog article. The main difference between Sylhet Oakblue and Vinous Oakblue is found in the hindwing underside. For Vinous Oakblue, the post-discal spot in space 6 is rather quadrate and is as wide as the interval between the spot in space 5 and the end-cell bar, which it usually overlaps slightly. 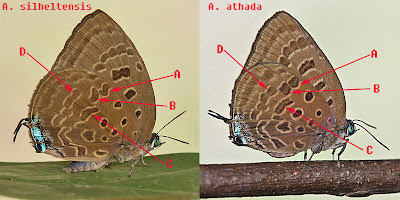 Field Observations of Butterfly Behaviour:
Though not very common in Singapore, this species has been encountered quite regularly both in urban parks and the Central Catchment Area. Usually they are sighted in the vicinity of their host plants. Typically they perch with its wings closed, but in sunny weather, the adults can be seen to open their wings fully to sunbathe.

Early Stages:
The similarity in appearance of adults between Vinous Oakblue and Sylhet Oakblue is also echoed in their life histories. Both have Syzygium spp. as their host plants, and their eggs, caterpillars and pupae have very similar shapes and markings. Visual differences are mainly in colorations and some markings. 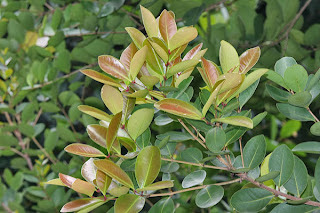 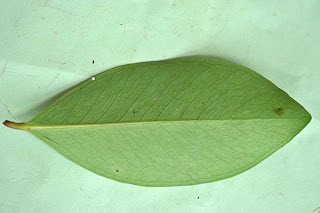 Leaf venation pattern of a rather young leaf. Can you spot one tiny egg?

The egg is laid singly on the underside of a mature leaf. Each egg is about 0.7mm in diameter, white in color, circular with a slightly depressed micropylar area and a finely reticulated pattern of intersecting ridges. 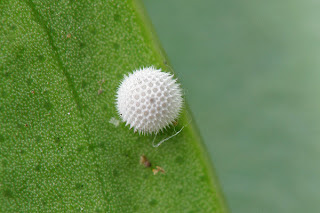 Egg of the Vinous Oakblue

It takes 3 days for the collected egg to hatch. The newly hatched has a length of about 1.5mm and has a light brown coloration. It has a rather flattened woodlouse appearance with a large semicircular first thoracic segment. This appearance remains as the caterpillar grows through the instars. A dark brownish marking can be seen on the anal plate. The body also carries long dorsal and lateral hairs. As it grows, the body color becomes more yellowish and a dashed dorsal line, reddish brown in color, appears. A large part of the first thoracic segment also changes from light brown to dark reddish brown. 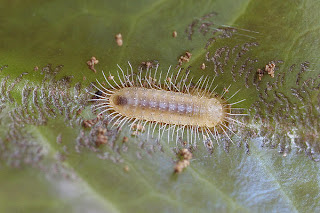 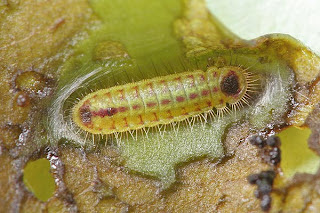 The 2nd instar caterpillar reaches a length of about 4mm, and after about 6 days in this stage, it moults again. The 3rd instar caterpillar is prominently marked with 1) a large dark patch on the 1st thoracic segment; 2) a continuous reddish brown dorsal band, flanked by fluorescent yellow bands on both sides, running from the 2nd thoracic segment up to the anal plate and 3) the dorsal organ is lined with dark "lips" and sits within an oval marking. The caterpillar now feeds by eating along the leaf edge and devours the whole leaf. The 3rd instar takes about 7 days to complete with the body length reaching about 8mm. 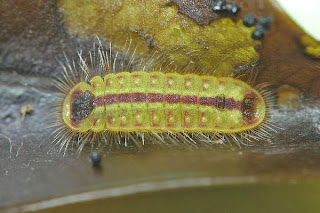 The 4th instar caterpillar has similar markings as the 3rd instar. One notable change is in the dark marking on the first thoracic segment becoming smaller in proportion and better defined in shape. Another notable change is the loss of reddish brown markings flanking the spiracles. The 4th instar takes about 10 days to complete with the body length reaching 13mm. 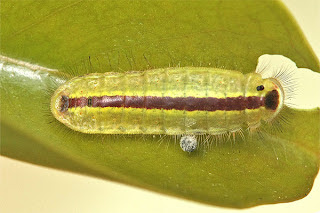 The 5th instar caterpillar has similar but more striking markings. Visible changes are 1) a white intermittent line running down the middle of the dorsal band and the well-shaped patches on the first thoracic segment and the anal plate; 2) the base body color becomes light yellowish with the first thoracic segment marked by a black edge; 3) each tentacular organ is highlighted in a black ring which is also connected to the main dorsal band.
After 12 days of feeding and reaching a length of about 25mm, the caterpillar slows down and actually stops food intake for about 1 day. During this time, its body length gradually shortened. Soon it becomes an immobile pre-pupa in its shallow leaf shelter. 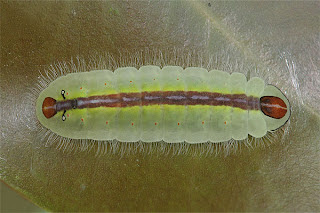 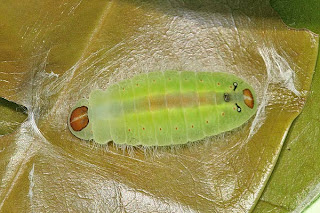 A pre-pupa of the Vinous Oakblue 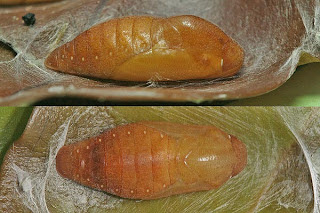 Eight days later, the pupa matures enough to show the markings on the forewing upperside. The next day, the pupal stage comes to an end with the emergence of the adult butterfly. 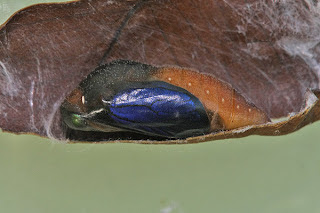 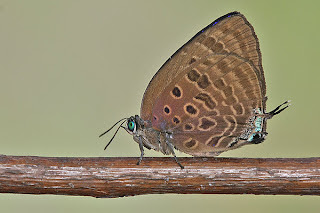 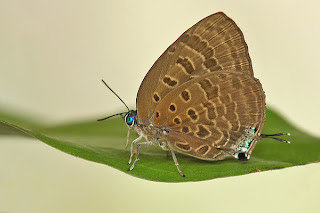 In the wild, the caterpillars of the Vinous Oakblue have been found to be attended by Polyrhachis ants of the tibialis group as shown below. 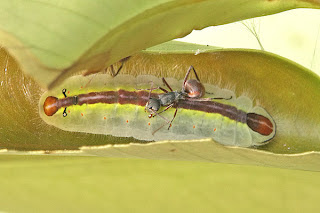 I would like to express my gratitude to Prof. Konrad Fiedler, Dr Rudy Kohout and Dr. Pfeiffer for their generous assistance in confirming that Vinous Oakblue (Arhopala athada athada) is the species for which the life history is described above, and for providing the ID for the attending ant.

Text and Photos by Horace Tan
Posted by Horace at 12:49 AM