Life History of the White Royal 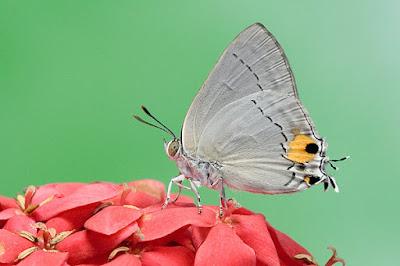 Physical Description of Adult Butterfly:
The upperside is deep lustrous blue for the male and paler blue for the female, and both sexes have black borders on both wings with the one on the forewings being very broad at the apex. The underside for both sexes is greyish white with a post-discal series of narrow black streaks. The hindwing underside has a orange-crowned black tornal lobe and a black marginal spot in space 2 broadly crowned in orange. There are two pairs of white-tipped tails at the end of veins 1b and 2.


Field Observations of Butterfly Behaviour:
The adults are rarely observed in the field. In the few field sightings in Pulau Ubin and an urban bushland, the adults were mostly found near its host plant either as newly eclosed specimens or females on ovipositing visits. They fly with swift but short flights. Some adults have also been observed to be flying at tree-top level in sunny weather.


The adult female lays eggs on the underside of a mature leaf. Freshly laid eggs are white with a light green tinge but this disappears within hours. Each egg is about 0.7mm in diameter, and has a reticulated pattern of ridges and pits on its surface. After three days of development within the egg shell, the caterpillar emerges by eating the top portion of the egg shell, and exits through the resultant hole. 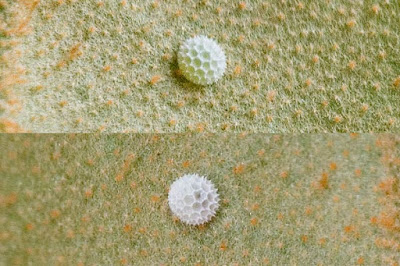 
The newly hatched caterpillar is about 1mm long, light brown in color and has rather long dorsolateral hairs. Both young and old leaves of the host plant are covered with a tawny tomentum, and the newly hatched caterpillar has to push aside these fine and vertillate hairs before skimming the lamina from one side of the leaf. The feeding is observed to take place on both young and old leaves. On mature leaves, the caterpillar has a preference for the underside where the light brown surface offers a better camouflage. Up to the third instar, the feeding caterpillar resembles a ploughing machine in action, with a winding furrow in its wake, and piles of fine hairs pushed to the sides and ahead of it. 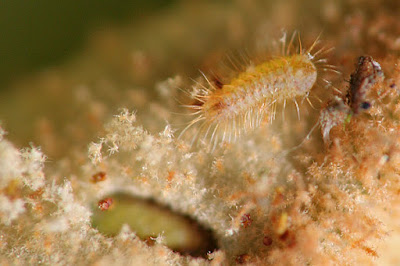 A newly hatched caterpillar leaving the site of its first meal. 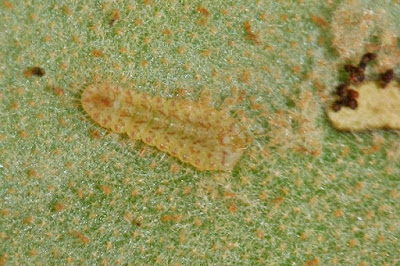 As it grows, a number of small and short reddish brown markings appears on its body. After four days of feeding and growing to a length of about 2mm, the caterpillar comes to rest for a period of about one day for the moult to the 2nd instar. In the new instar, the caterpillar assumes a more woodlouse shape with shorter dorsolateral hairs in proportion to its body size. There is a diamond-shaped prothoracic shield on the first thoracic segment and the dorsal nectary organ on the 7th segment. The neatly arranged reddish brown markings on its body has become very prominent. 
After another four days of feeding in the same ploughing manner, the caterpillar reaches a length of 4.5mm, and it goes on to stay dormant for about one day for the moult to 3rd instar. The 3rd instar caterpillar loses most of the reddish brown markings from its body which now has a a light green undertone. The tentacular organs on the 8th body segment are also observable as they are everted from time to time. Feeding is still done by skimming the leaf surface, but on rare occasions, some 3rd instar caterpillars were also observed to eat from the edge of the leaf. 3rd instar caterpillar of White Royal
Feeding activity in 3rd instar lasts four days, with body length reaches 8.5mm-9mm. Another day is spent for moulting to the 4th and final instar. The final instar caterpillar has become more stout with a raised dorsal ridge marked with a whitish undertone. It exclusively eats from the edge of the leaf. As it feeds, the caterpillar wraps its sub-spiracular part of its first few body segments around the leaf edge. A 4th instar caterpillar eating at the leaf edge
The 4th instar caterpillar spends five days feeding, reaching a length of 12-13mm before entering the prep-pupal stage. The caterpillar moves to a branch of the host plant, and comes to rest in a head-up position. After about half a day in its position, the prep-pupa turns around to assume a head-down position. Pupation finally takes places after another half-day. Total number of days of larval growth inclusive of pre-pupuation is 21. Pre-pupation stage in left and middle panels showing the reversal of head position. The resultant pupa is shown in the right panel.
The pupa is held firmly by the tail in a head down position. It has a white base color with bold dark band on its upper half and dark yellowish diffuse patches along the dorsal line. When disturbed, the pupa could jerk up and down at a fast pace. Two views of a fresh pupa
After 7 days, the pupa case becomes transparent and features such as the forewing upperside, eyes and antennae of the adult are visible. The next day, eclosion takes place in the mid-morning from 7am to 10am. The emerged adult stays on the split pupal case to expand and dry its wings before moving on to begin another cycle of this species. From egg to eclosion, the cycle length recorded is about 32 days. A mature pupa with the forewing upperside visible.

Part 1 of 2 of an eclosion sequence (left to right order).

Part 2 of 2 of an eclosion sequence (left to right order). Another newly emerged White Royal.
Text and Photos by Horace Tan
Posted by Commander at 9:30 AM

Wow! This blog is so cool! Thanks for sharing all those info and photos! Really awesome! Where can we find the White Royal in SG? :D

Long time no see! :) The White Royal is rare in very local areas, and you know where we butt shooters hang out, so you can PM us at www.butterflycircle.com if you can ever find time to get away from your kiddos.