Life History of the Green Oakblue 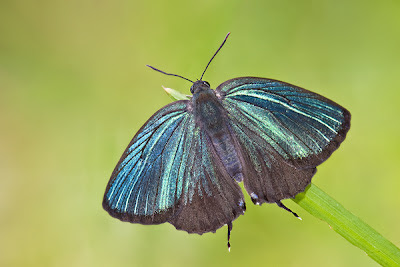 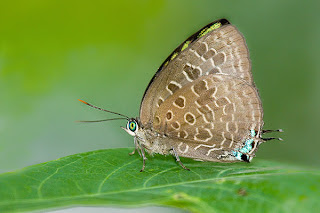 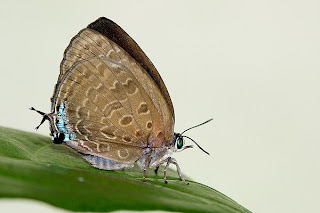 Physical Description of Adult Butterfly : On the underside, the adult butterflies have the post-discal spot in space 4 of the forewing moved out of line with the spots above and below it; and on the hindwing the post-discal spot in space 6 is below the spot in space 7. The adults are tailed and moderately large. The male has a brassy green upperside with the forewing border decreasing in thickness from the tornus to the apex. In contrast, the female has a purple blue upperside, and on the forewing the border usually reaches the apex of the cell.
Field Observations of Butterfly Behaviour : This species is a forest denizen and the adult butterflies have been observed to fly in the vicinity of its host plant within the nature reserve areas of Singapore. Both sexes spend much time resting among foliage on the uppersides of leaves with wings closed. When disturbed they usually take off with a swift flight. In sunny weather, they can be spotted sunbathing on uppersides of leaves with both wings opened flat. This sunbathing behaviour has been observed to be a well-timed event taking place in the afternoon.

The female oviposits on the underside of a mature leaf of the host plant. Each time a single egg is laid, but as the mature leaf is rather large, sometimes several eggs can be found (singly, not in a cluster) on the same leaf. The egg is small (about 0.5mm in diameter) and white in colour, circular with a slightly depressed micropylar area and a reticulated pattern of intersecting ridges. 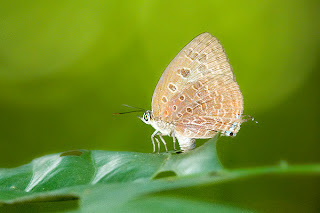 Female Green Oakblue with abdomen curved to lay egg on the leaf underside.

After about 2 days, the caterpillar hatches from the egg. As it makes its way out of the egg shell, the tiny young larva consumes the eggshell partially for its exit. As the caterpillar of all instars only eats the soft young leaves of the hostplant, the newly hatched has to move away from the mature leaf (where the egg was laid), and make its way to the younger leaves of the host plant. Upon arrival at the young leaves, the caterpillar nibbles away on the leaf surface, making tiny holes on the leaf and leaving a trail of frass behind it.

Left : The large (up to 30cm in length) and hardened mature leaves of the host plant where eggs are laid on the undersides by the female Green Oakblue. ; Right : Young shoot of host plant with soft leaves for caterpillars of Green Oakblue to chew on.

The caterpillars of all instars have a much flattened appearance and have a large, flattened, semicircular first thoracic segment . They construct loose leaf shelters to which they return for rest and for hiding when their feeding activity nearby is disturbed. Typically the caterpillars of all instars would rest next to the main rib of the growing leaf. The caterpillars also have a dorsal nectary organ and have been observed to be attended by ants of two species. On one site, the attending ants are of the Polyrachis species, but on another site, the attending ants are much smaller and species ID of which is yet to be determined. The Green Oakblue larvae have also been observed to be victimized by a parasitoid of Apanteles sp. 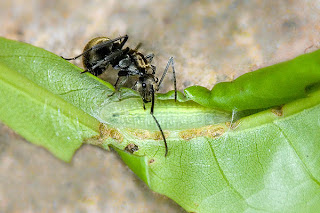 A 4th instar caterpillar being attended to by an ant of Polyrachis sp.

The 1st instar caterpillar is initially light yellowish with a tinge of beige. As it grows, it loses the beige tinge and becomes increasingly yellowish. It starts at about 1mm in length, and grows to about 3mm in 2 days before the moult to the 2nd instar. 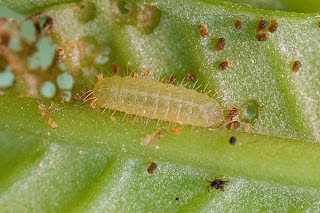 1st instar caterpillar on the young leaf next to the evidence of its feasting. 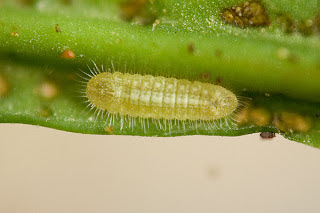 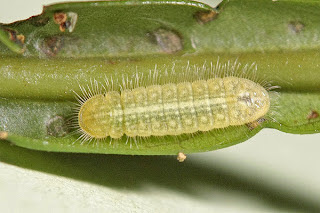 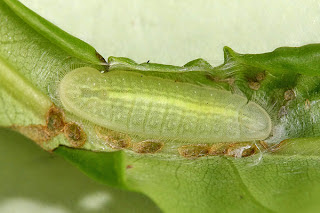 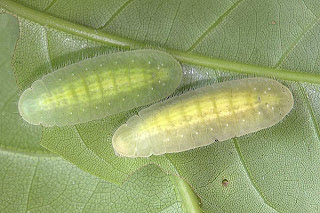 Two 5th instar caterpillars, with the green one being earlier in growth. 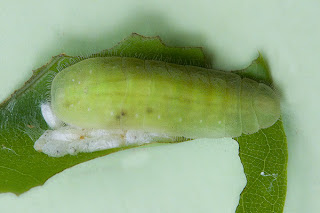 An ill-fated 5th instar caterpillar with cocoons of a Apanteles sp. underneath it. The poor caterpillar eventually died hours later.

About 16 days after its hatching from the egg, the caterpillar ceases its feeding activity and its body color becomes reddish brown. At the same time its body length gradually becomes shorter. This lasts for about one day. The caterpillar then goes into a one and half day of pre-pupation pose within a loose leaf shelter. During this time, the caterpillar prepares for pupation by spinning a silk girdle and a silk pad to which it attaches itself via cremastral hooks. 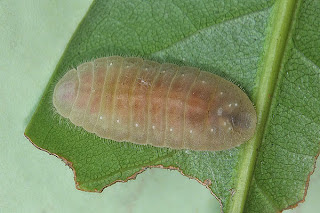 The late 5th instar caterpillar is reddish brown and shrunk in length a day before pre-pupation. 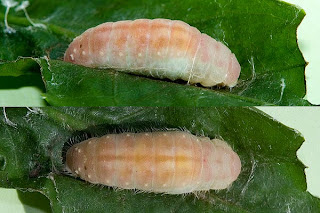 The preparatory caterpillar hours before pupation. The silk girdle is already constructed.

After about 10 days, the pupal shell turns transparent and the wings of the soon-to-be-emerging butterfly can be seen through the pupal shell. Eclosion takes place within the next 24 hours, typically one or two hours after dawn. 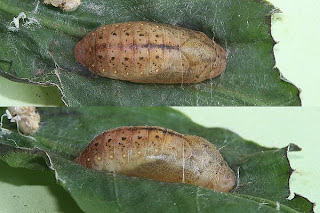 Two views of a pupa of the Green Oakblue. 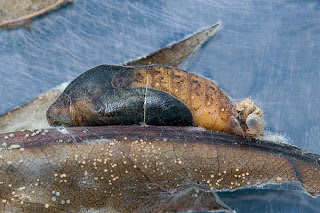 All ready for eclosion. The upperside wing pattern of the adult butterfly can be seen through the now transparent pupal case. 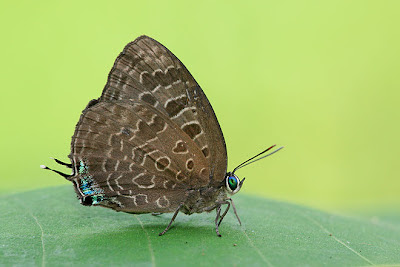 An adult male Green Oakblue
Posted by Commander at 11:12 AM

based on literature and a couple of your photos, I'm guessing the host plant is Quercus argentea

Thanks for the suggested plant ID, Ming Shen. It will certainly help us narrow down our search for the plant ID when we eventually send a sample to the Botany Centre at SBG for identification.