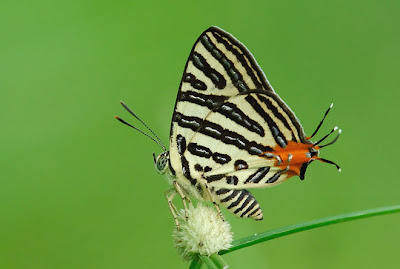 A male Club Silverline perches on a flower

The Silverlines belong to the genus Spindasis. The butterflies are distinguished by the silvery markings on the undersides and the hindwings possess two tails. Males of the species are usually with iridescent blue or purple tinge with a broad border on the forewings, whilst females are either brown, or a pale blue. Many species in the genus have an orange tornal patch with black spots on the underside of the hindwings. Females are typically larger with the forewings more rounded at the apex. Species of the genus are distributed from Sri Lanka to Japan, the Philippines and in South East Asia.
The female of the Long Banded Silverline (Spindasis lohita) is described to oviposit on a host plant on which aphids or scale insects live, and which has a nest of the ant Crematogaster rogenhoferi which attend them. The newly hatched larva seeks protection from the ants which build a nest shaped like an aircraft hangar on a branch or amongst leaves with wood flakes. The larva lives in the ants nest from which it emerges during the night to feed. The larva is always attended by a few ants. The larva is described to be dark green or brown, mottled with lighter shades and pale orange spots. Pupation takes place in a small rough cocoon made of leaves spun with silk. The pupa has no silken girdle and is hooked onto the wall of the next only by the cremaster.
Known host plants of the species are Dioscorea pentaphylla, Terminalia paniculata, Xylia sp., Psidium guayava (Guava), Glochidion rubrum Mallotus japonicus, Rhamnus formosana, Rumex crispus and Rhus javanica.

In Singapore, only two species of the genus Spindasis are known to exist. These are : 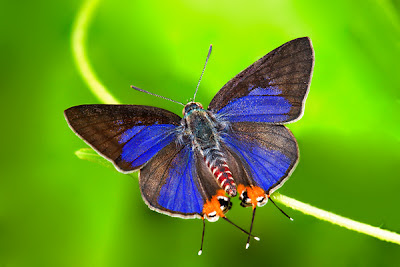 In the male of the Long Banded Silverline, the dorsal area of the forewing and almost the whole of the hindwing is shot with purple blue. The pale yellow underside is traversed by five or six silver lines which are broadly edged with dark red.

The Long Banded Silverlines like to perch and stay quite still. The top right shot shows an individual puddling on damp seepage.

The Club Silverline can be distinguished from the former species by the basal streak on the forewing below. The colour of the silver edging may be black (most often) or dark red (rarely).

Like the Long Banded Silverlines, the Club Silverlines often stop to perch on grasses. The first shot shows an individual feeding on its favourite nectaring plant - the flowers of the Mile-a-Minute creeper (Mikania cordata)

The butterflies are often seen in the early morning hours and late afternoon hours, feeding on flowering plants. The flowers of the Mile-a-Minute (Mikania cordata) are the usual favourite. The butterflies are fast flyers, but often stop to perch on a few favourite perches to rest. In the later part of the afternoon, they often open their wings flat to sunbathe. 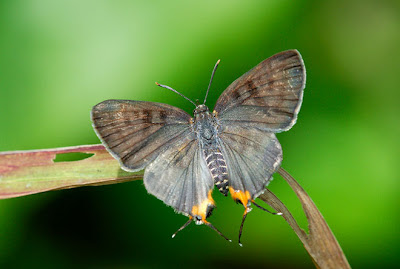 A Club Silverline opens its wings to sunbathe.

The two species are quite widely distributed on Singapore island, and also on Pulau Ubin and Tekong, but they are not common.